Categories
Area of Interest Musculoskeletal bone ; Imaging Technique MR
Procedure Diagnostic procedure ; Special Focus Blood ;
Show more Show less
Download as PDF Print Show related cases Notify admin
Clinical History
A 17-year-old teenage boy with a history of haemophilia A presented with right knee pain lasting for six month. No history of trauma was reported. Physical examination only showed an enlargement of the knee without inflammatory signs.
Imaging Findings
A frontal radiography of the knee was performed and showed an expansible lucent lesion with well-defined contour in the medial tibial metaphysis with associated cortical erosion (Fig. 1).
Subsequently, magnetic resonance imaging (MRI) was performed and showed a subperiosteal lesion with heterogeneous signal intensity. Hyperintense areas in T1-WI (with and without fat suppression) were identified being compatible with subacute bleeding. Elevation of the periosteum with areas of focal erosion and extension to the soft tissues were also seen. Sagittal T2-WI fat-saturation images show linear hypointense areas translating deposits of haemosiderin (chronic phase haemorrhage). Peripheral contrast uptake was observed after intravenous injection of gadolinium. Increased signal intensity of bone marrow (BM) adjacent to the lesion compatible with reactive oedema was also seen (Fig. 2). Our patient was treated conservatively with clinical improvement.
Discussion
Haemophilia is an X-linked recessive disorder that occurs because of deficiency of clotting factors. The disease occurs predominantly in men and is transmitted through women. The two common forms of this disorder, haemophilia A and B (due to the deficiency of clotting factor VIII and IX, respectively), are similar in their clinical presentation and imaging findings.
The hallmark of the disease is haemorrhage, particularly into joints or in the soft tissue. The haemophilic pseudotumour is an uncommon complication and results of repeated chronic bleeding in the musculoskeletal system, occurring in 1-2% of patients with severe coagulopathy [1-5].
These lesions can be located in the bone (intramedullary or subperiosteal) or soft tissue (intra or extra-muscular). The most commonly involved bones, in descending order, are the femur, pelvis bones, tibia and hand bones [1-5].
Clinically, patients usually present with painless expanding masses that may be detected incidentally. They may also present due to acute bleeding, which can cause local and systemic signs or secondary complications (fracture or neurovascular compression) [1-5].
On X-ray osseous pseudotumours usually present as lytic lesions with well-defined borders. However, when they reach large dimensions, they can completely replace bone segments and have a more aggressive appearance.
Subperiosteal bone involvement is seen as an elevation of the periosteum over the cortex. The intra-medullary bone is preserved. Cortical erosions and extension to soft tissues are also common radiologic findings and can simulate an aggressive lesion like Ewing's sarcoma [1-5].
Magnetic resonance imaging (MRI) allows identifying the haemorrhagic nature of the injury with heterogeneous areas with hypo- and hypersignal in T1 and T2 weighted images representing the blood degradation products at various stages of evolution. There may be a peripheral fibrous rim with hyposignal in T1 and T2 weighted images. This fibrous capsule may show enhancement after injection of intravenous contrast. Bone marrow oedema of the adjacent intra-medullary bone may be seen due to inflammatory reaction. Despite the findings on MRI they are not pathognomonic for this pathology. Diagnostic is possible by imaging in the appropriate clinical context, avoiding biopsy and the potential risk of serious complications [1-5].
If the pseudotumour is rapidly diagnosed, while the lesion is still small, the clinical management, which includes bone replacement therapy and immobilization, may be enough. However, in cases where the lesion becomes extensive, sometimes involving neurovascular structures, surgery becomes the only viable option. Ultimately, amputation of the limb involved may be the only surgical option [5].
Differential Diagnosis List
Haemophilic pseudotumour
Aneurismal bone cyst
Ewing sarcoma
Metastasis
Osteomielitis
Final Diagnosis
Haemophilic pseudotumour
References

Anteroposterior radiograph of the right 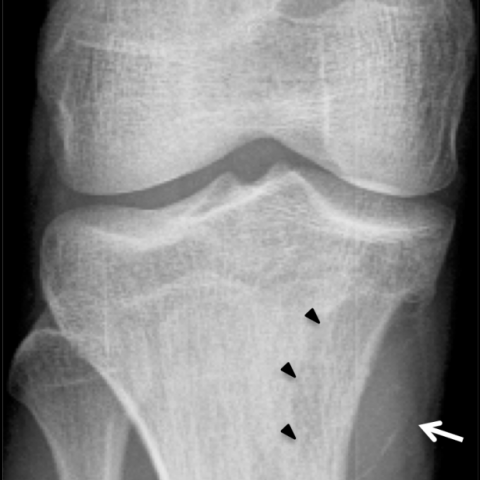 There is a expansible lesion with well-defined borders (arrowheads) in the medial aspect of the proximal tibial metaphysis with cortical erosion (arrow).
Figure 2 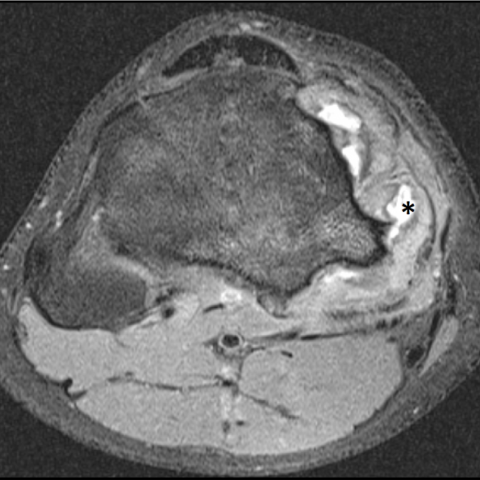 Axial T1-WI fat-saturated image show a heterogenous periosteal lesion in the tibial metaphysis with areas with high signal (*), translating the presence of metheamoglobin (subacute haemorrhage). The lesion extends to the soft tissues. 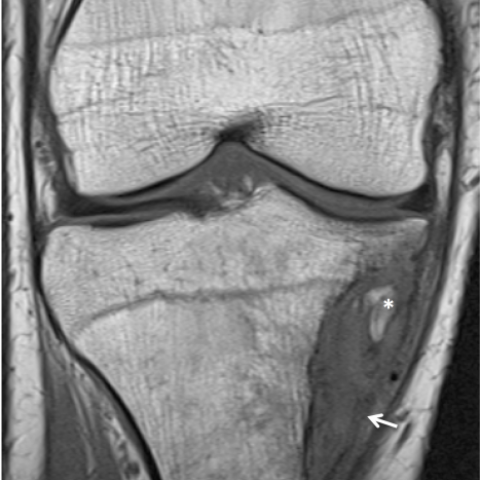 Coronal T1-WI image shows a heterogeneous lesion in the tibial metaphysis with areas with high signal (*), translating the presence of metheamoglobin (subacute haemorrhage). There is elevation of periosteum with areas of focal erosion (arrow). 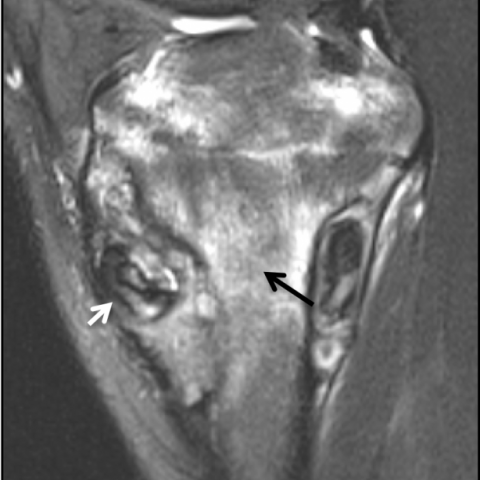 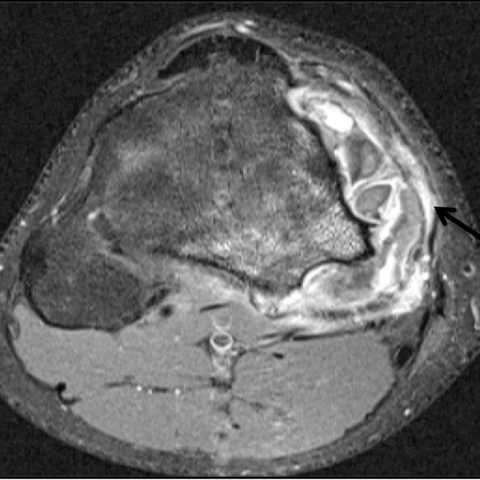 Anteroposterior radiograph of the right 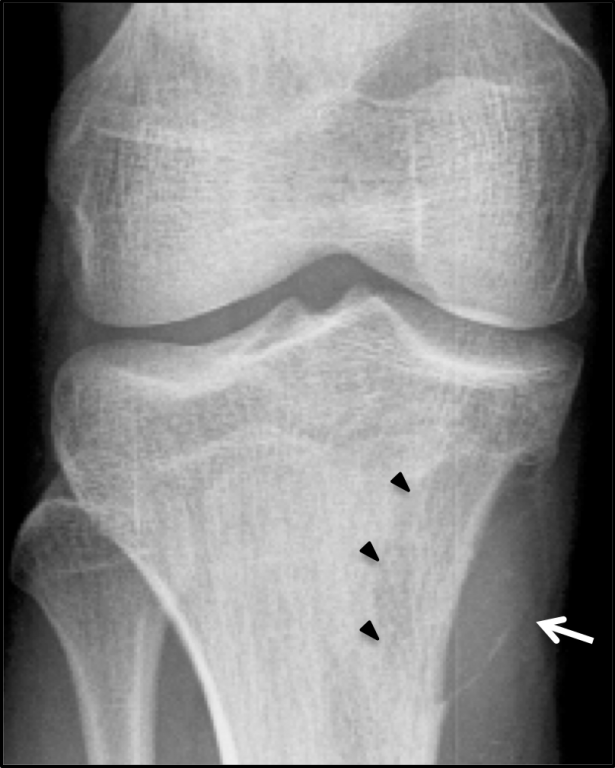 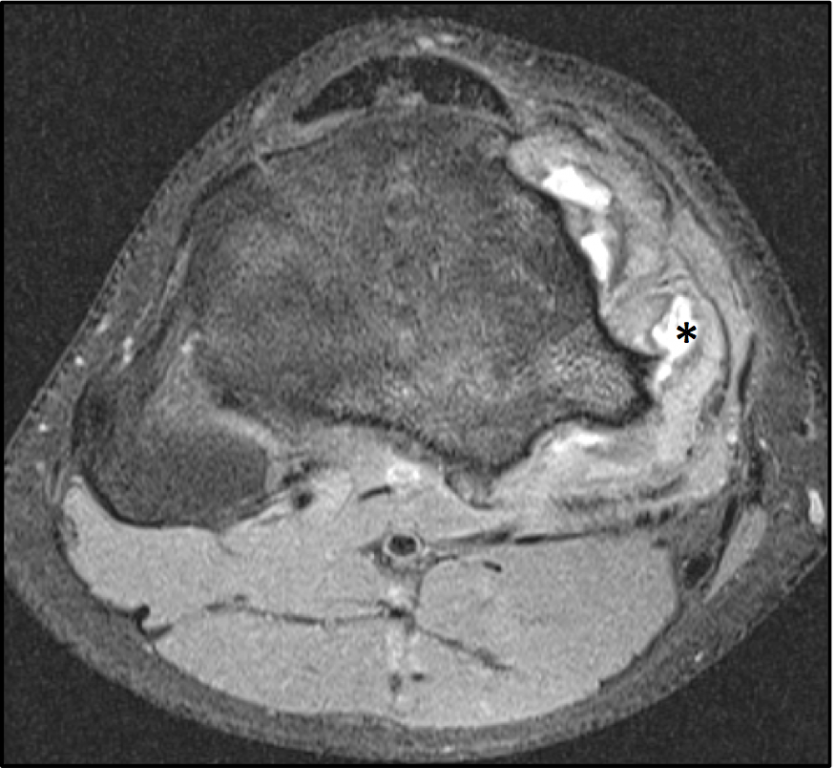 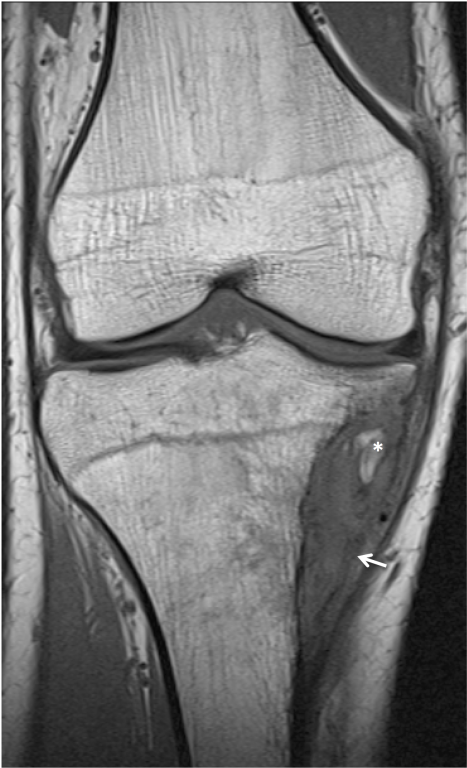 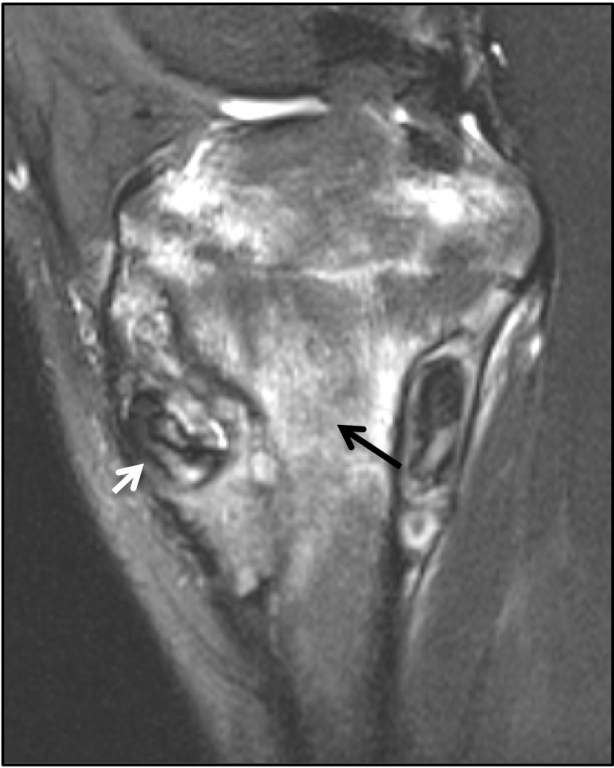 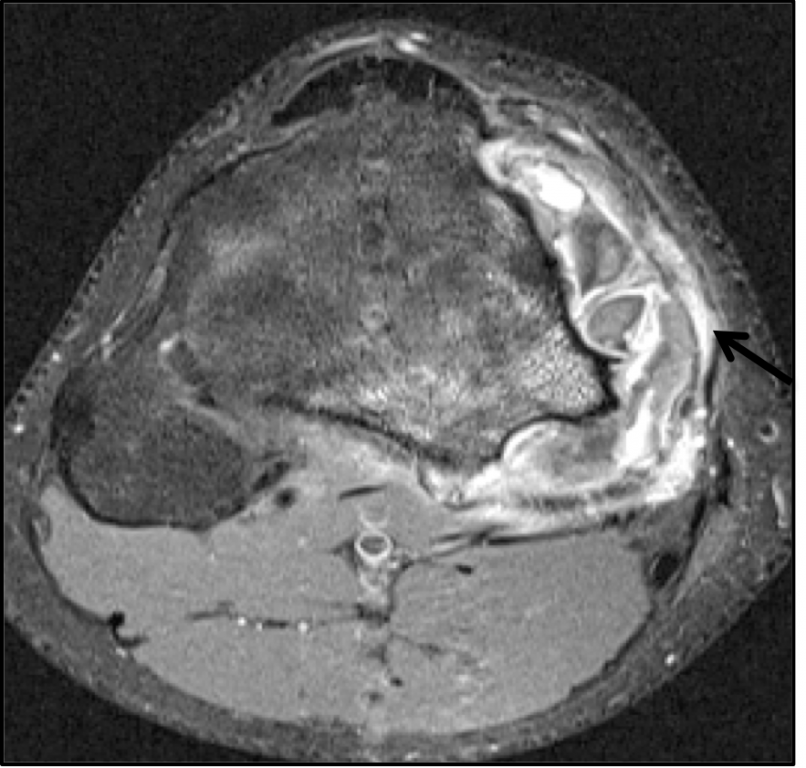