Pharyngeal desmoid-type fibromatosis in a pediatric patient with Gardner's syndrome

MRI depicted a rounded, well defined oropharyngeal mass, with intermediate signal intensity on T1-weighted images and hyperintense signal on T2-weighted and STIR images, with moderate paramagnetic contrast uptake. It was located on the left submucosal oropharyngeal space, in contact with the left palatine and lingual tonsil and extending into the mouth's floor, hypopharynx and glottis, producing significant airway reduction.
Discussion
Desmoid tumours are rare tumours: the estimated incidence in the general population is 2-4/1.000.000 per year [2]. Most tumours are intra-abdominal or located on the abdominal wall (28-69 %)[1], the least common site is extra-abdominal. In addition, only 10% of the extra-abdominal tumours affect head and neck [1, 7]; therein lies the singularity of our case.
Their association with Gardner's syndrome is well established: 5-15% of desmoid tumours are associated with familial polyposis syndromes (APC mutation) such as Gardner's syndrome [5, 6].

They are also known as deep fibromatosis and/or aggressive fibromatosis and they are solid soft tissue tumours that proliferate from fibroblast mesenchymal cells. They are considered benign tumours but, in some cases, they have an aggressive evolution with adjacent structure involvement or local recurrences, even after a successful surgical resection [3].

Imaging examinations are useful to approach the diagnosis and to assess the extension, the mass effect, the relationship with adjacent structures and the surgical resection possibility. Although CT has a higher spatial resolution, the lack of ionizing radiation in MRI makes it especially suitable in infantile fibromatosis. Furthermore, MRI has a prognostic value since it has been shown that higher T2-weighted image intensity is associated with faster tumour growth [1].

Desmoid tumours are well circumscribed soft tissue lesions with an ovoid morphology. Their MRI signal characteristics are highly variable, depending on the predominant histological component (collagen, myxoid matrix or spindle cell) [4]. On T1-weighted images they are homogeneous and isointense or slightly hyperintense relative to muscle. On T2-weighted images they are usually heterogeneous: T2 hyperintensity translates fibroblast major component, while T2 hypointense areas translate hypocellularity or fibrosis [1]. After paramagnetic contrast agent administration they may show homogeneous or inhomogeneous enhancement versus no enhancement; the cell array explains this feature.
On CT they appear as well circumscribed soft tissue masses that show similar or mildly lower attenuation than the adjacent muscles, and slight enhancement after intravenous contrast administration.
On US images they are usually visualized as a hypoechoic lobulated mass that may infiltrate adjacent structures [2]. 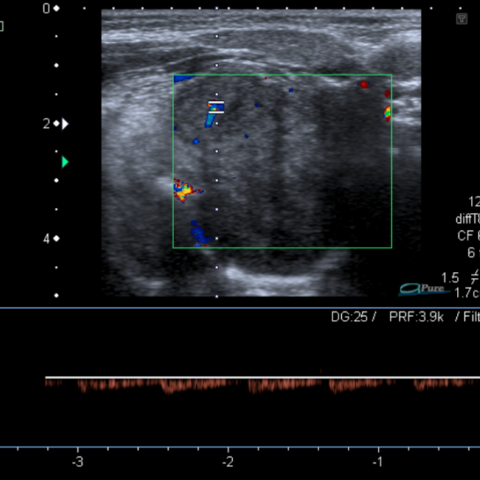 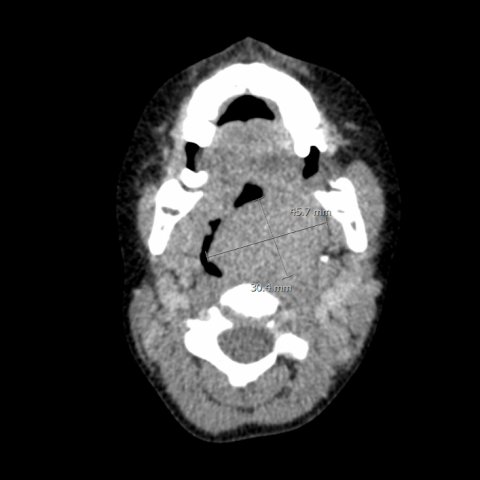 Axial CT image shows an oropharyngeal well circumscribed, soft tissue mass, with similar attenuation than the muscles, and slight enhancement after contrast administration. The airway is almost completely occupied by the mass.
Figure 3 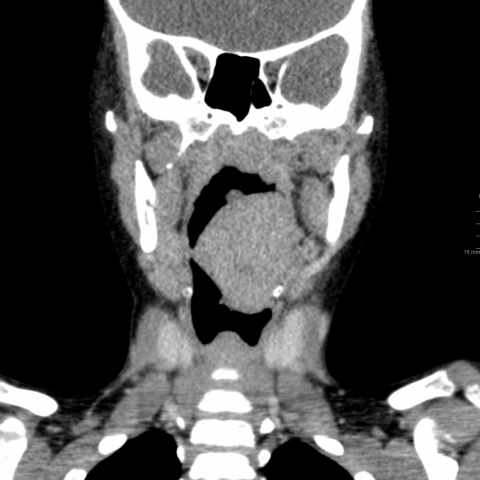 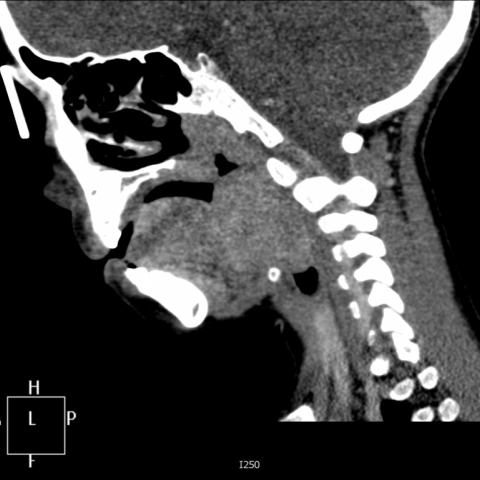 On this sagittal CT image we can confirm that the mass produces a significant airway reduction.
Figure 5 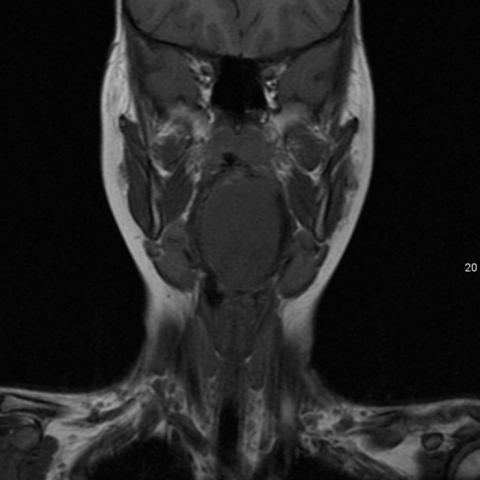 This T1-weighted coronal image exhibits that the oropharyngeal mass is isointense relative to muscles.
Figure 6 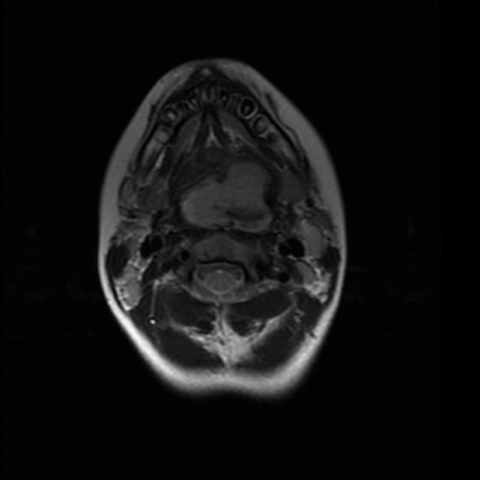 On T2-weighted axial image the mass is heterogeneous, most of it hyperintense.
Figure 7 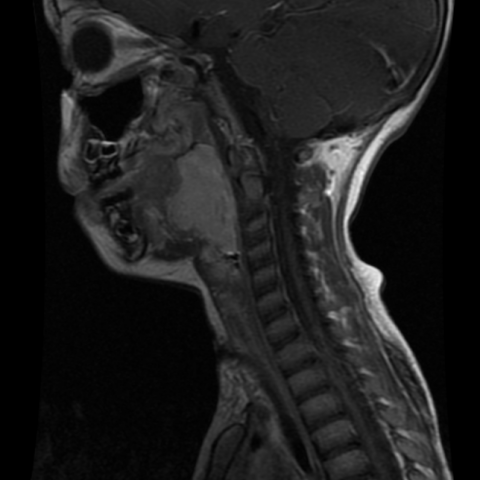 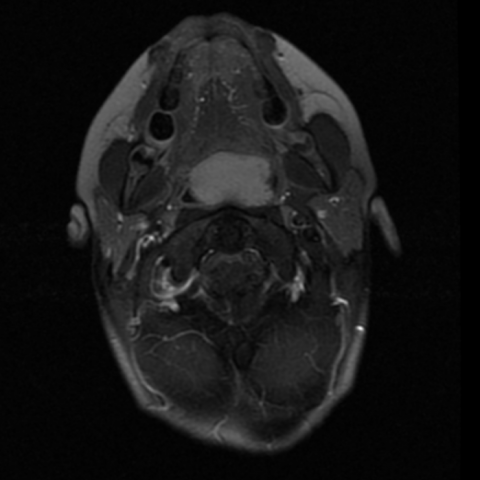 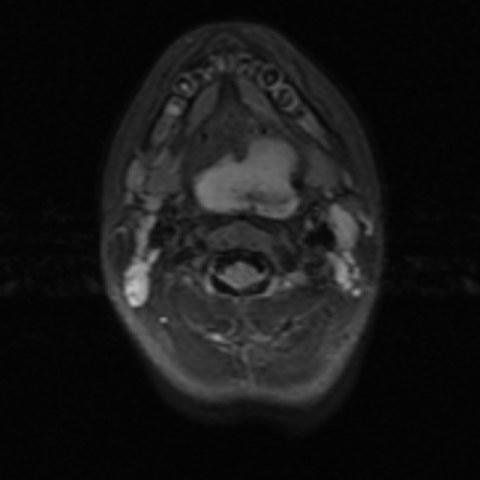 On STIR images it is an hyperintense solid oropharyngeal mass. 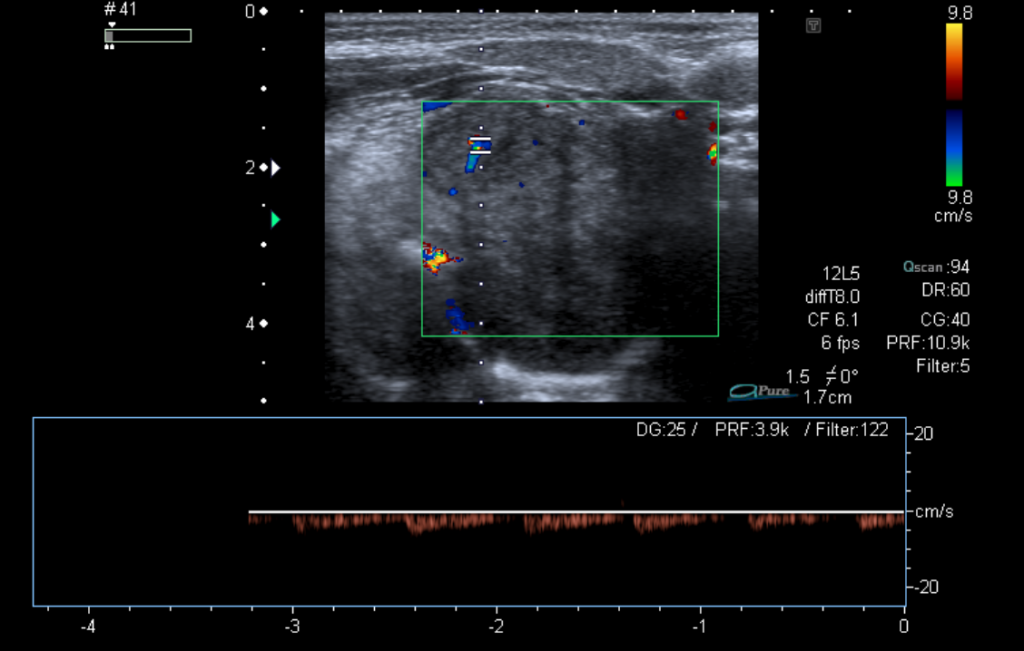 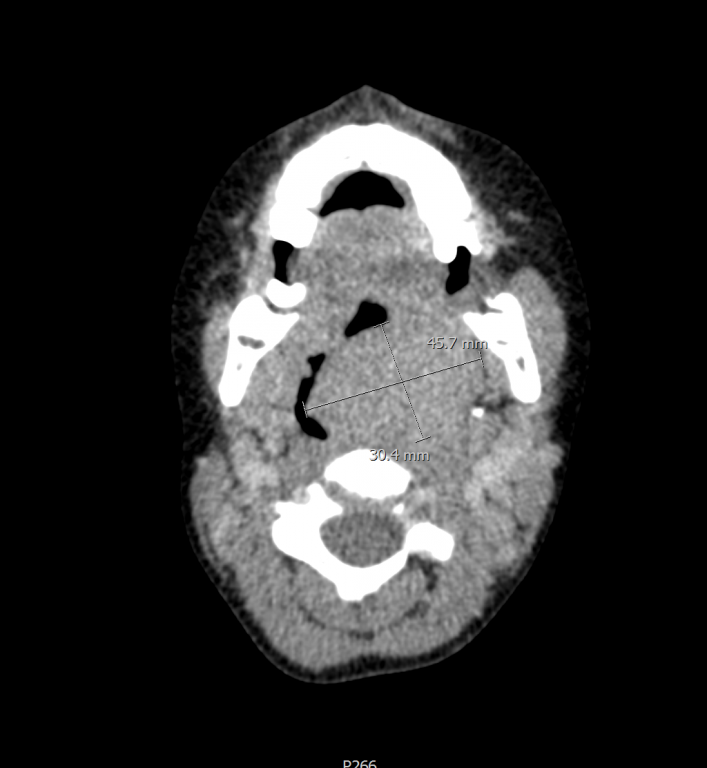 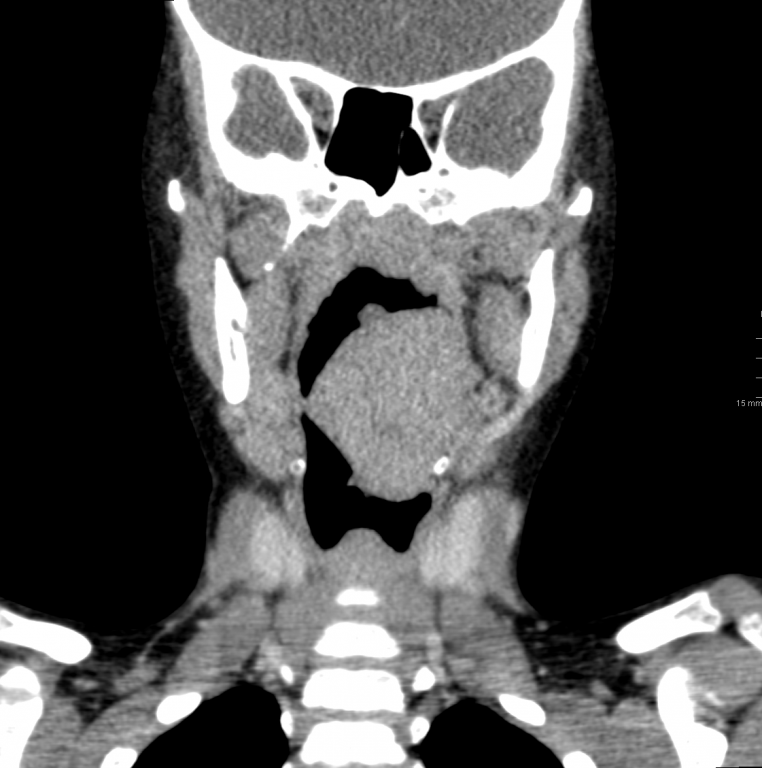 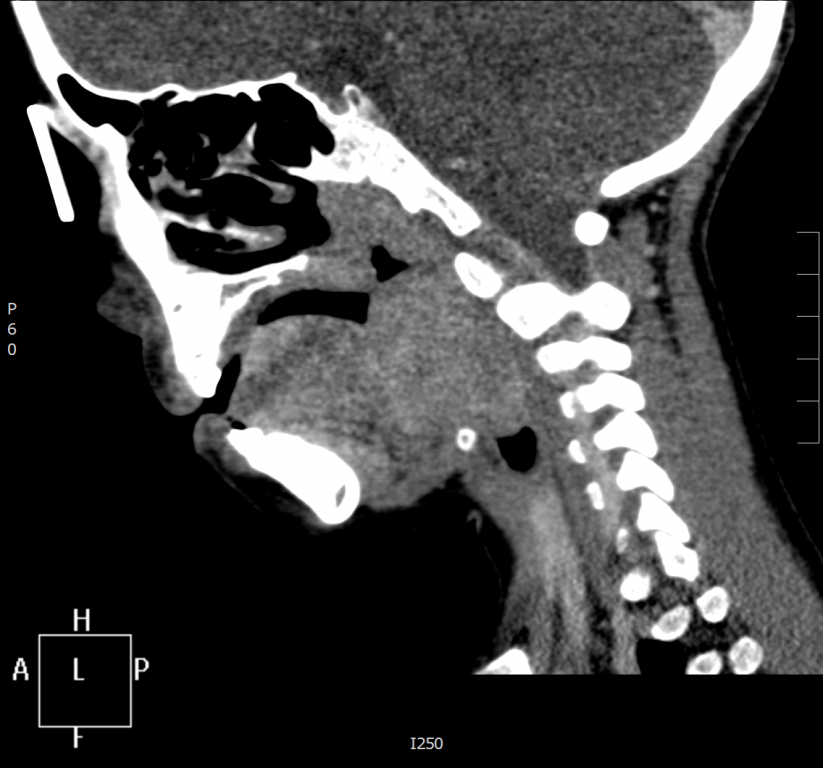 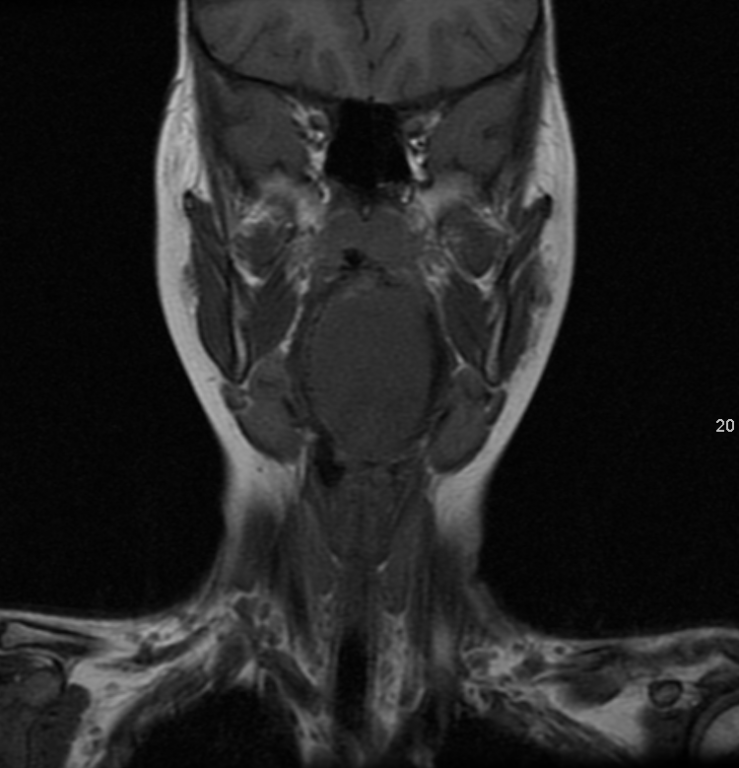 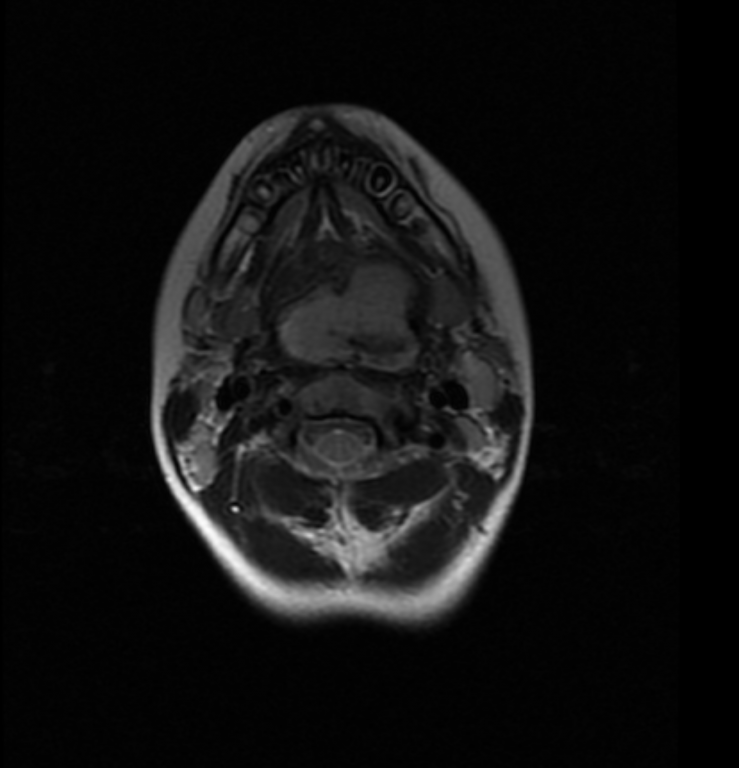 On T2-weighted axial image the mass is heterogeneous, most of it hyperintense.
López N, Department of Radiology, Hospital Universitario La Paz, Madrid, Spain. 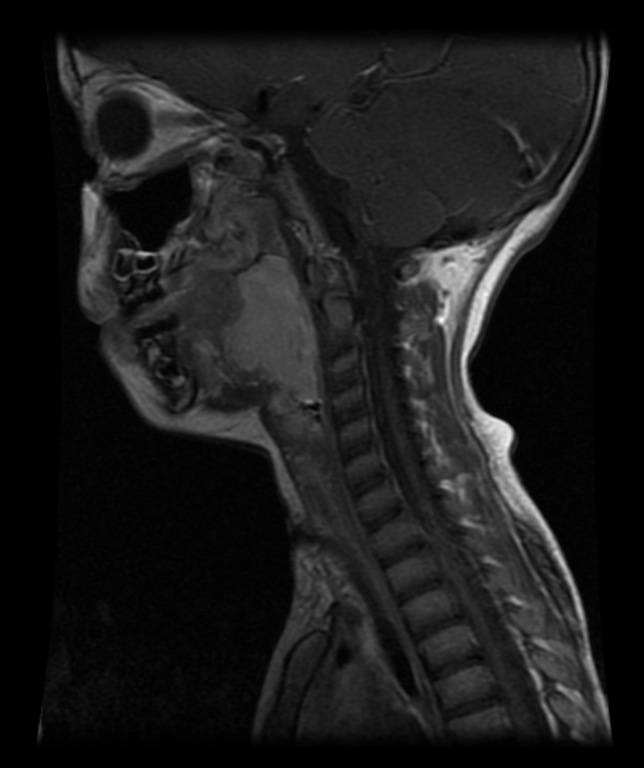 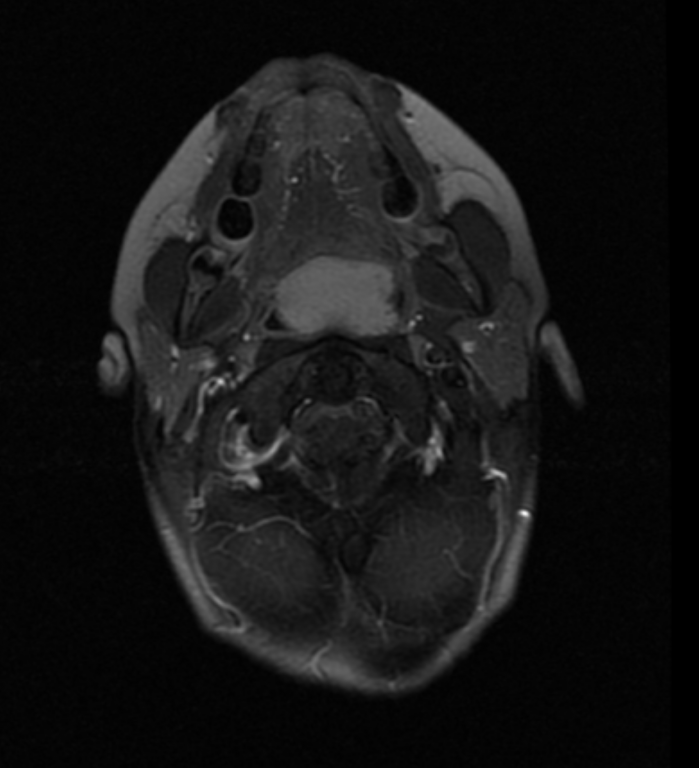 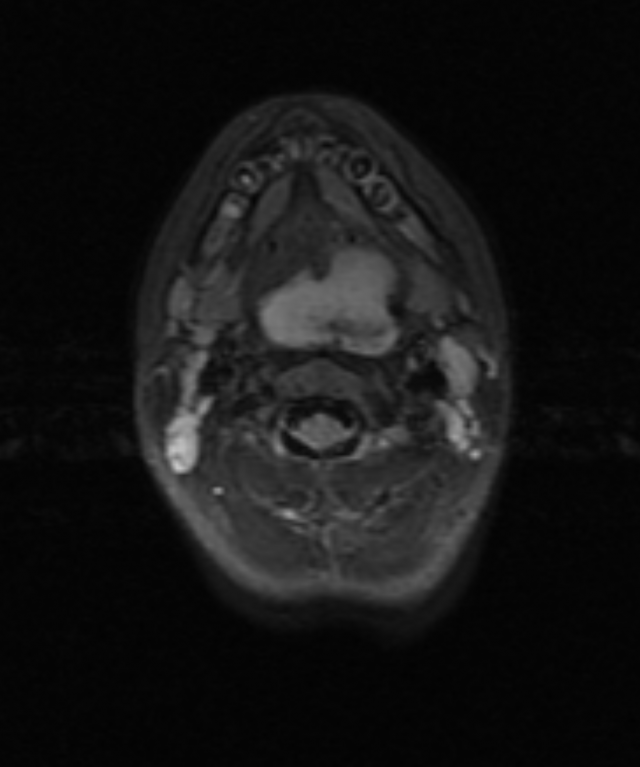