Categories
Area of Interest Abdomen ; Imaging Technique CT, MR
Procedure Diagnostic procedure ; Special Focus Lymphoma ;
Show more Show less
Download as PDF Print Show related cases Notify admin
Clinical History
Male, 47 years, HIV positive, with epigastric abdominal pain and loss of weight for 6 months. In laboratory evaluation the main finding was anaemia.
Imaging Findings
Ultrasound showed a focal bowel thickening in the central abdomen.
Abdominal CT depicted wall thickening in two segments of the gastro-intestinal tract. The first in the gastric body and antrum, without significant enhancement, excentric, not ulcerated, associated with many lymph nodes along the great curvature and mesenteric root. The second in the transverse colon, circumferential, short and homogeneous.
The gastric and enteric lesions in MRI showed marked restriction in diffusion weighted sequences and in mesenteric lymph nodes. An additional lesion was found in the region of the terminal ileum and cecal pole.
Two nodular hepatic lesions, one in each lobe, with intermediate signal in T2 and marked restriction in diffusion, were clearly depicted in MRI, but not on the CT.
Upper and lower gastro-intestinal endoscopic studies confirmed the presence of one ulcerated gastric lesion and three lesions in colonic wall (cecum, transverse and sigmoid colon).
Biopsies performed revealed high grade non-Hodgkin lymphoma.
After chemotherapy we observed marked lesion regression.
Discussion
The gastrointestinal tract is the most commonly involved extra-nodal site of lymphoma, and is almost exclusively of non-Hodgkin type [1]. Primary gastrointestinal lymphoma most commonly involves the stomach, but can involve any part of the gastrointestinal tract from the oesophagus to the rectum. The incidence of non-Hodgkin lymphoma has been increasing, primarily due to a variety of environmental and exogenous factors, particularly the increasing incidence of human immunodeficiency virus (HIV) infection [2].
Of all primary gastrointestinal lymphomas 50-60% are non-Hodgkin lymphoma, over 50% of all cases of non-Hodgkin Lymphoma demonstrate gastrointestinal involvement at autopsy, and up to 10% of cases of high-grade, early stage non-Hodgkin lymphoma involve the gastrointestinal tract [1].
The most common presenting symptoms witch might evolve within days to months, include epigastric pain (78%), anorexia (47%), weight loss (24%) [3].
In the case of multiple gastro-intestinal masses, the differential diagnosis needs to be tailored with the patient background.
Adenocarcinoma is the most frequent mass in gastro-intestinal tract, but is rarely multiple, and lesions are shorter in length but more prone to cause obstruction.
Carcinoid and neuro-endocrine tumours are more frequent in the duodenum and ileum, could be multiple in some syndromes, but are usually hyper-vascular, with intense enhancement after contrast.
In HIV patients, lymphoma should be placed at the top of the possibilities. First because the incidente of this neoplasm is increased in these patients, second because the multiplicity of lesions suggests a systemic disease, and third because high level of restriction in diffusion is typical of very cellular tumours.
Langerhans cell hystiocitosis and eosinophilic syndromes are systemic diseases that usual occur with pulmonary involvement, in the form of nodules and cysts in the first one or with migratory consolidations in the second one. Additionally, intestinal involvement is more diffuse, with mucosal thickening that does not show restriction in diffusion [4].
Because of their high cellularity and high nucleus-to-cytoplasm ratio, lymphomatous lesions have low ADC values and appear hypo-intense on ADC maps. As a result, whole-body DW MR imaging with ADC mapping has become a promising tool for lymphoma staging and treatment response assessment [5].
The treatment options include surgery, radiation, chemoimmunotherapy and eradication of H. Pylori infection. Our patient responded well to chemotherapy with almost full regression of lesions after the first cycle.
As a take home message we state that it is very important to have a histological diagnosis, differentiating carcinoma from lymphoma, since the therapeutical approach is quite different.
Differential Diagnosis List
High grade non-Hodgkin B cell lymphoma
Lymphoma
Carcinoid tumour
Adenocarcinoma
Langerhans cell Histiocytosis
Final Diagnosis
High grade non-Hodgkin B cell lymphoma
References 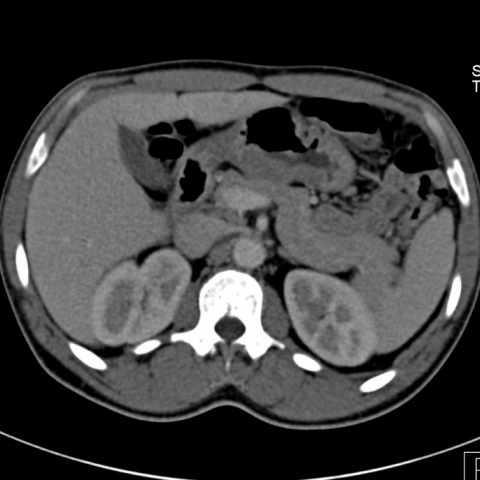 CT with intravenous contrast shows thickened posterior stomach wall, mainly in the body and antrum segment, with effacement of the mucosa contour and slight enhancement.
Figure 2 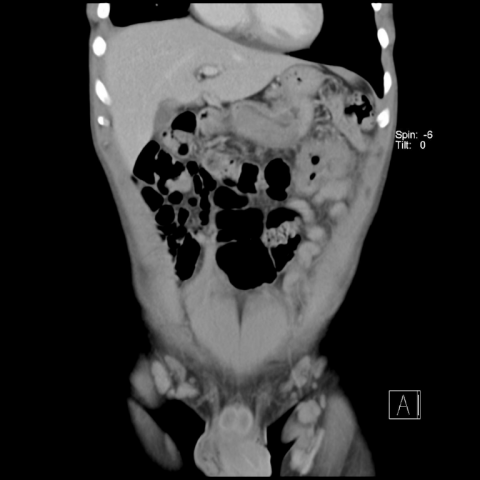 CT with intravenous contrast shows a circumferential mass in the transverse colon, hypovascular, with ill defined borders, extending to the adjacent fat, not causing dilatation of right side colon.
Figure 3 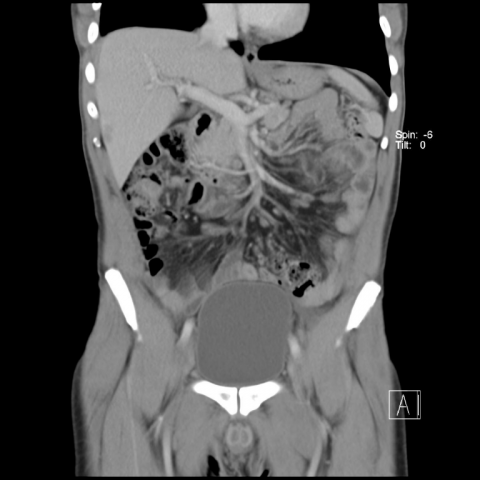 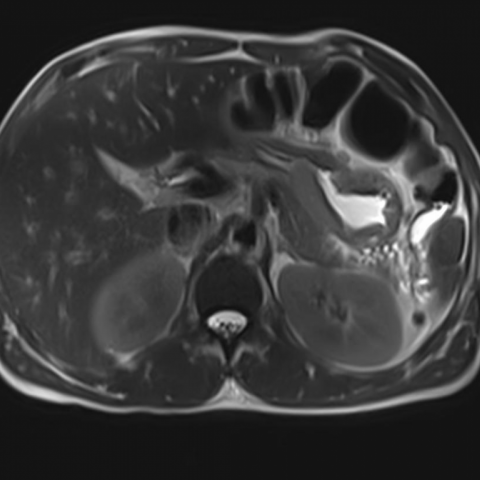 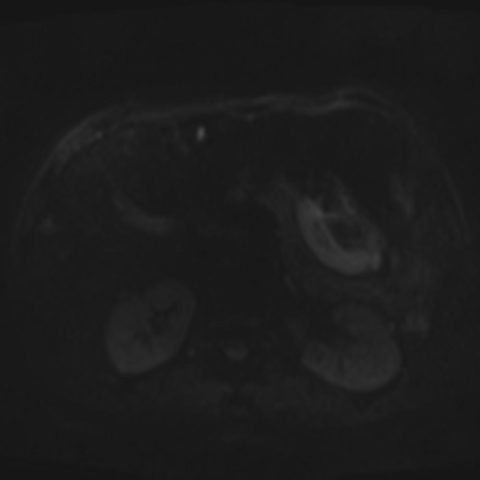 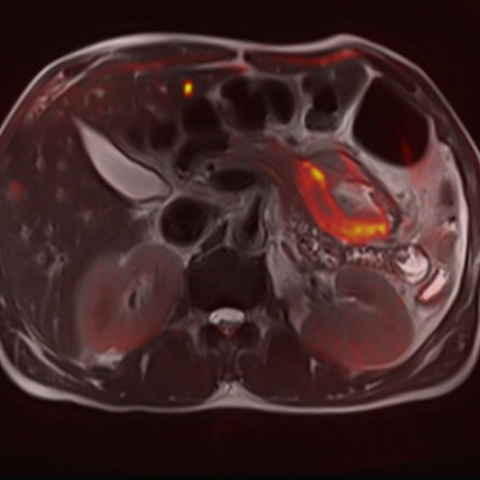 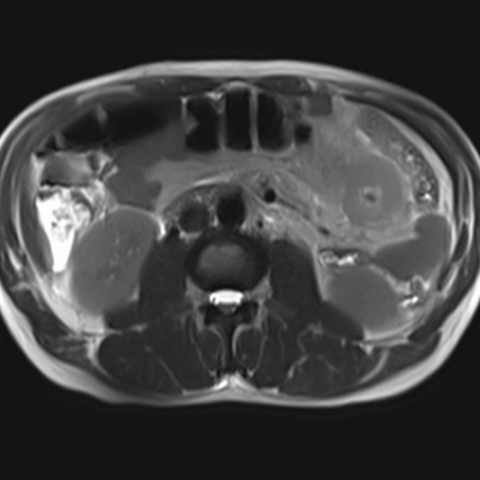 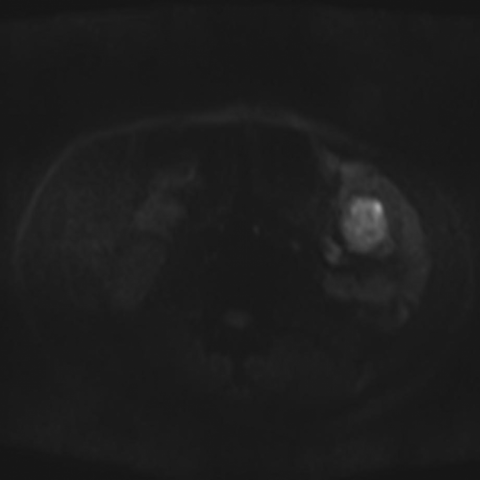 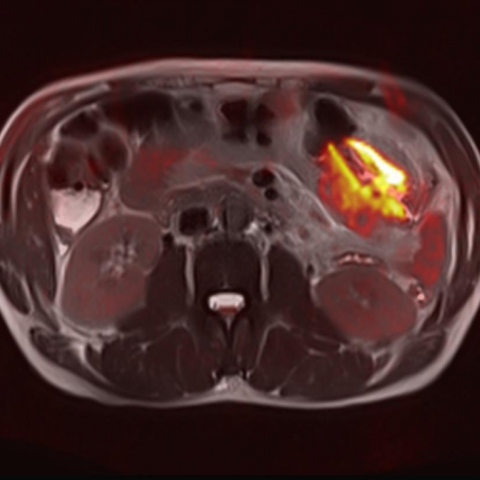 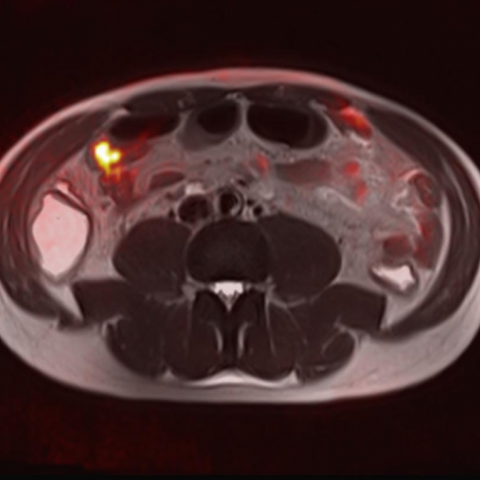 Fused T2 and diffusion images shows involvement of terminal ileum by a lesion with high restriction. 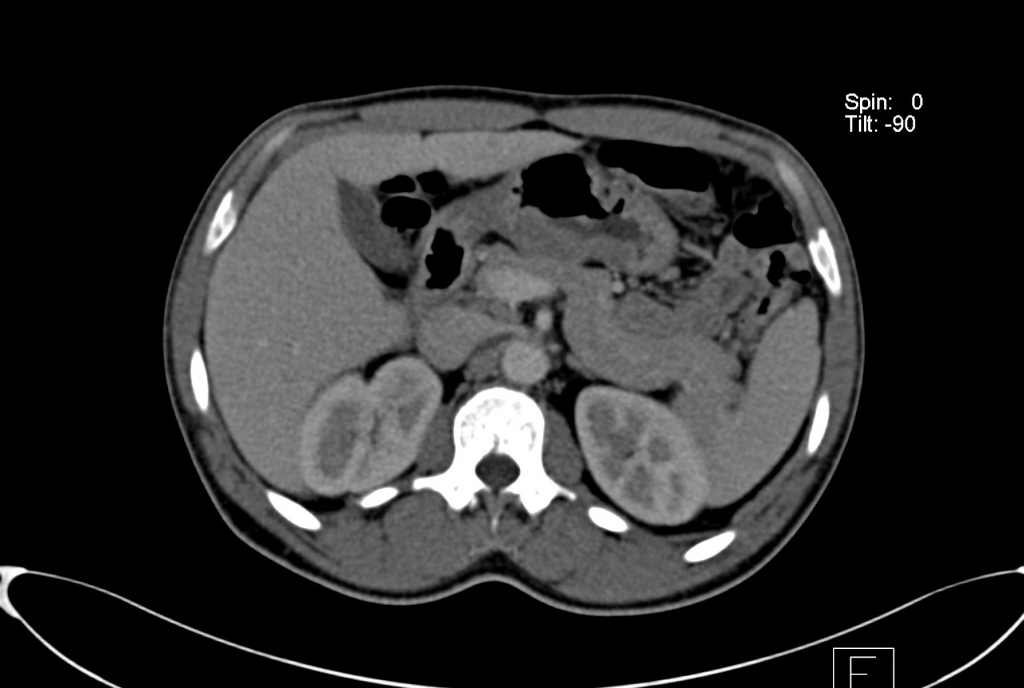 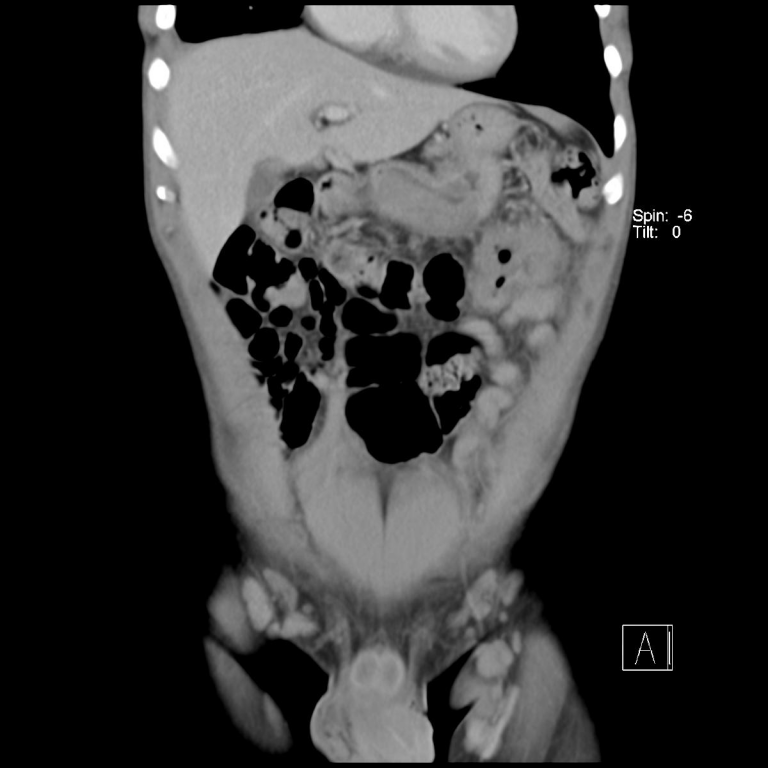 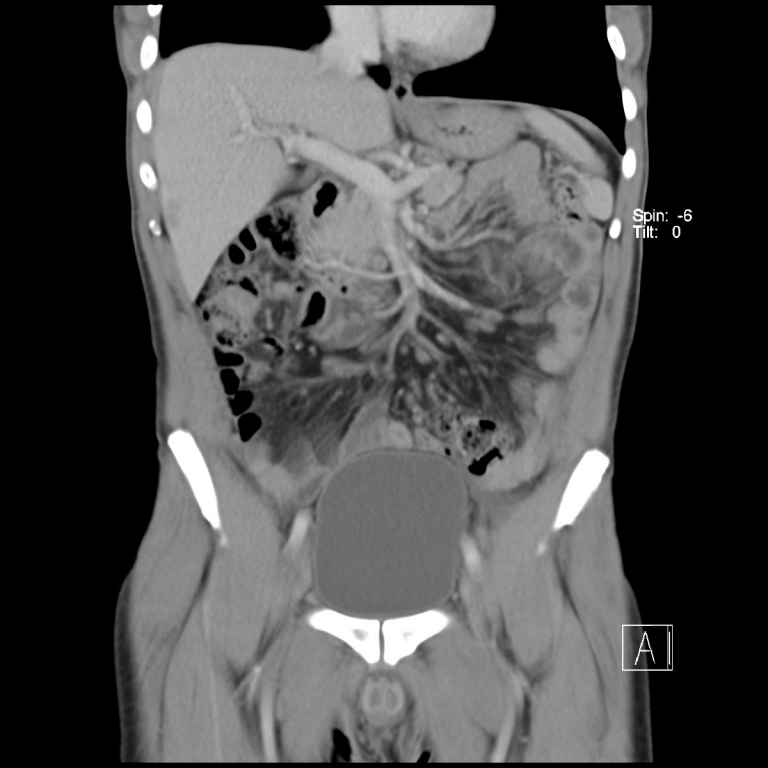 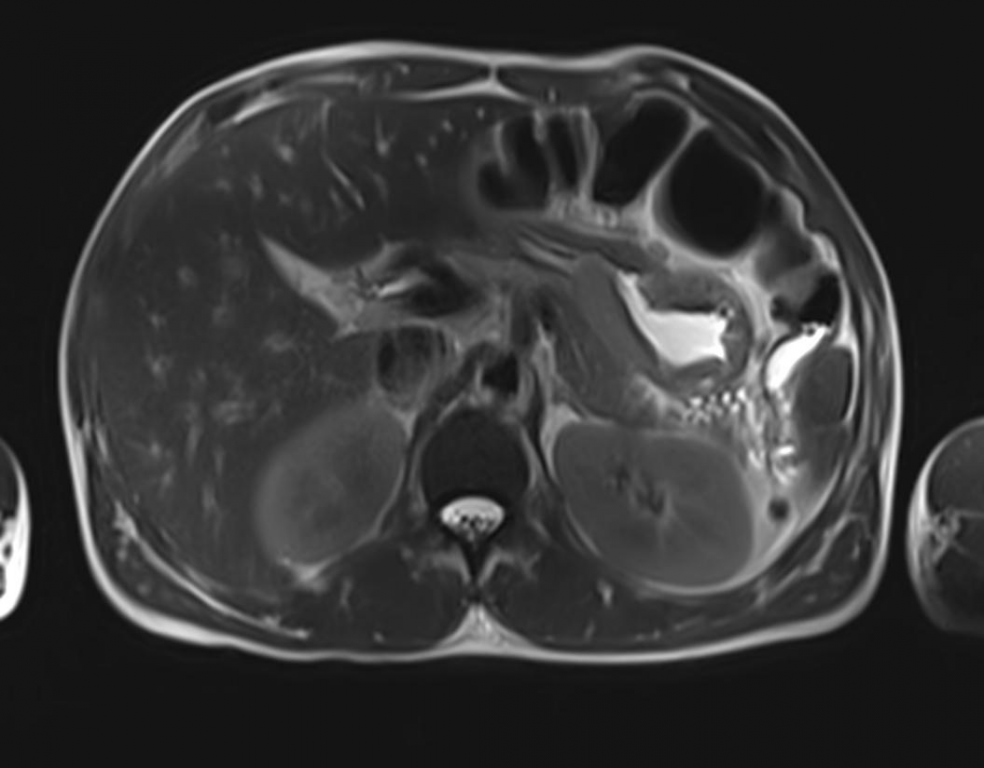 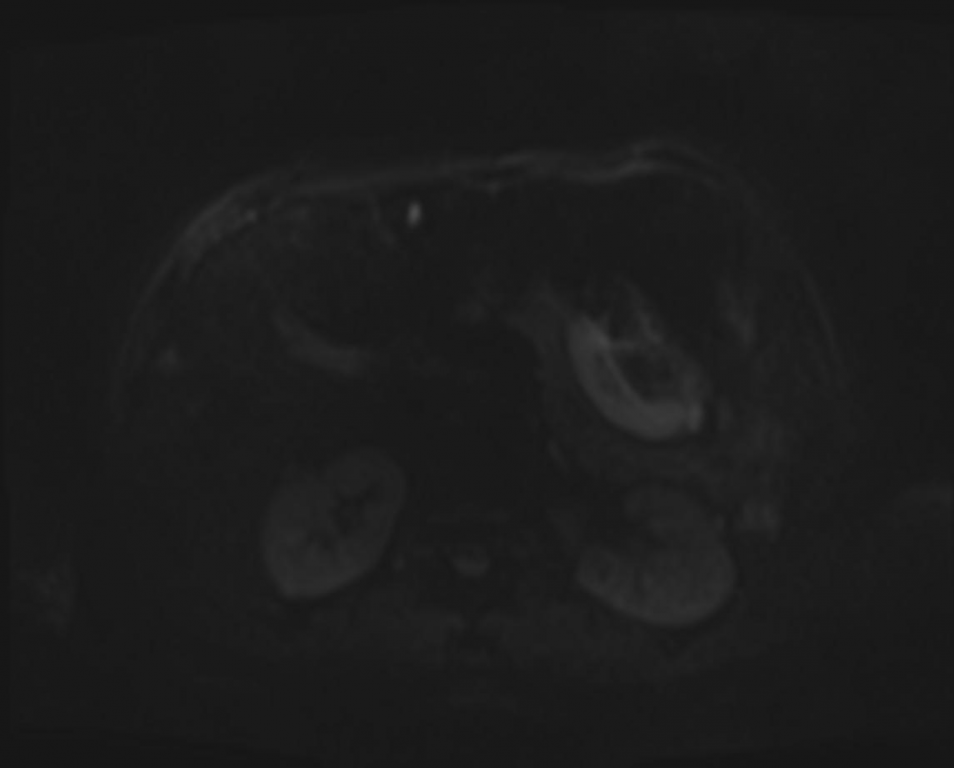 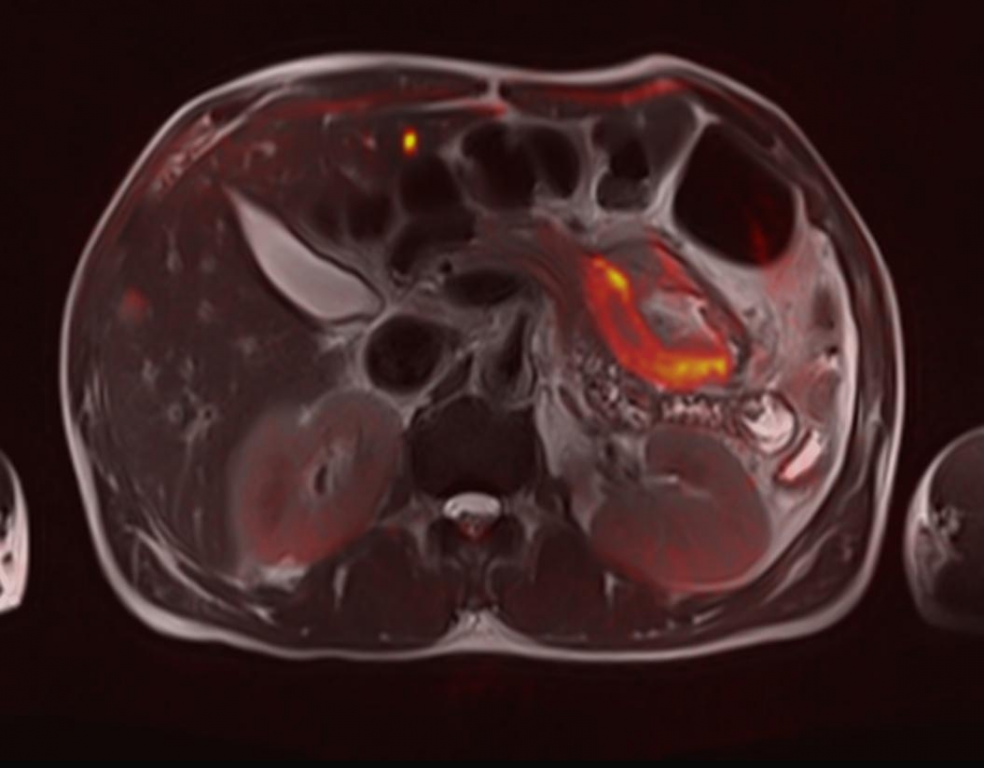 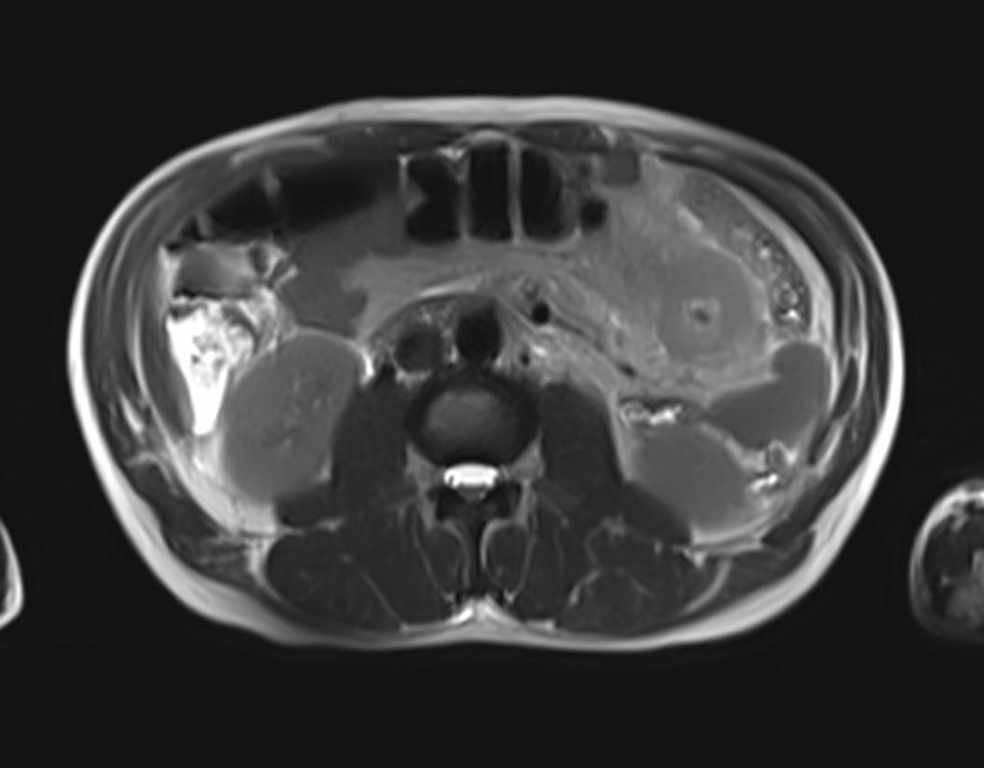 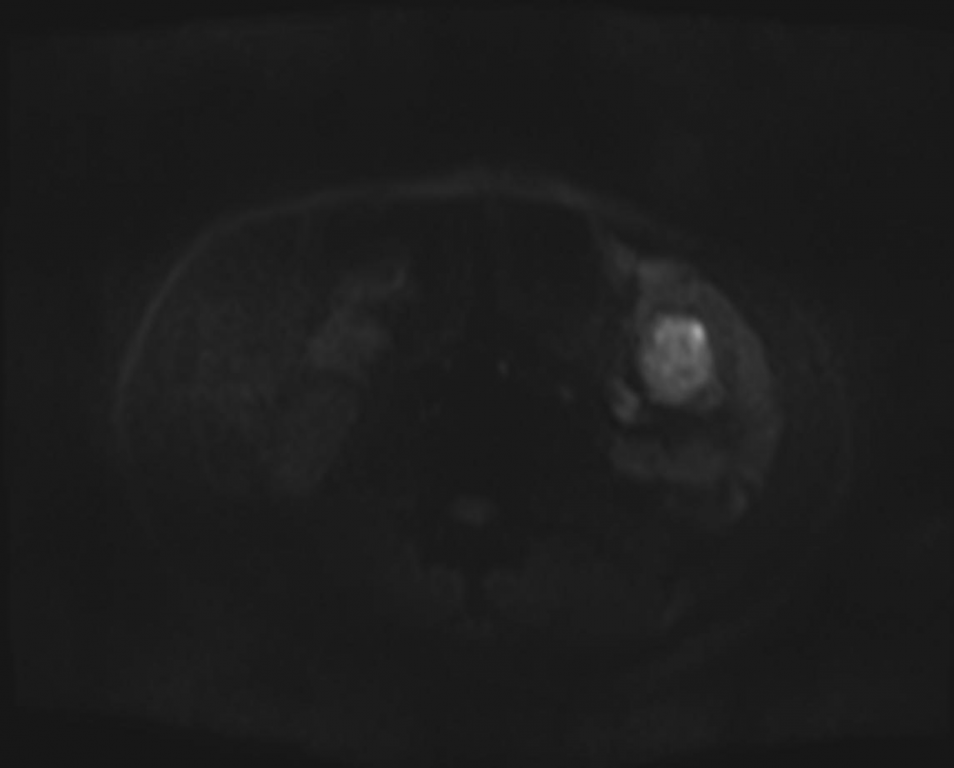 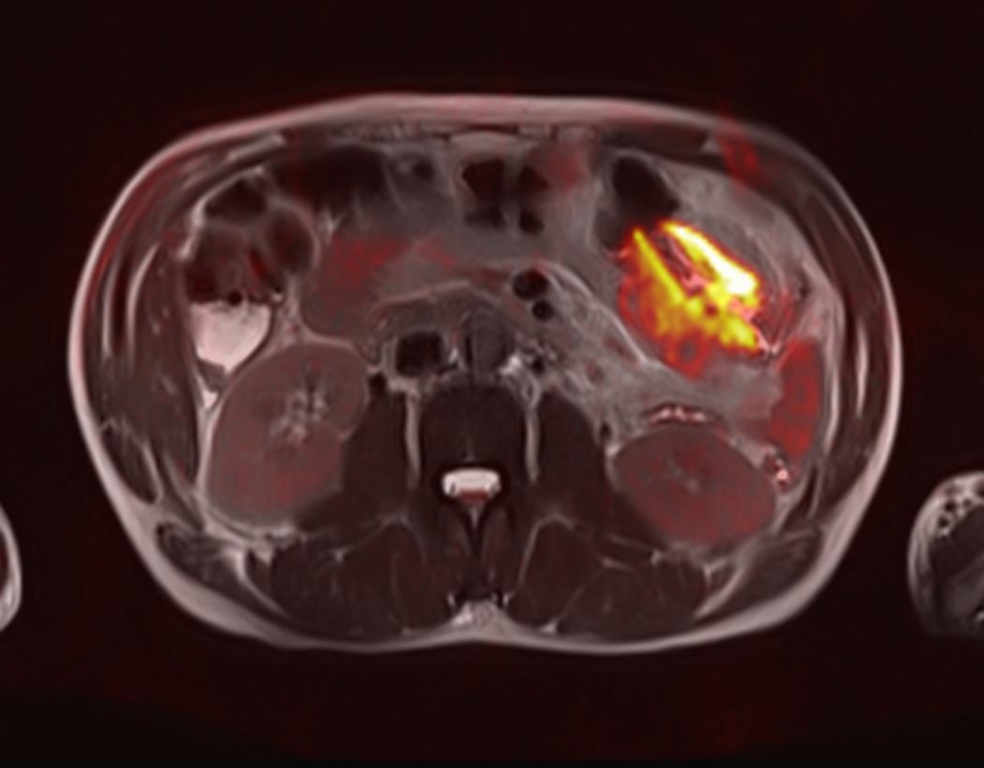 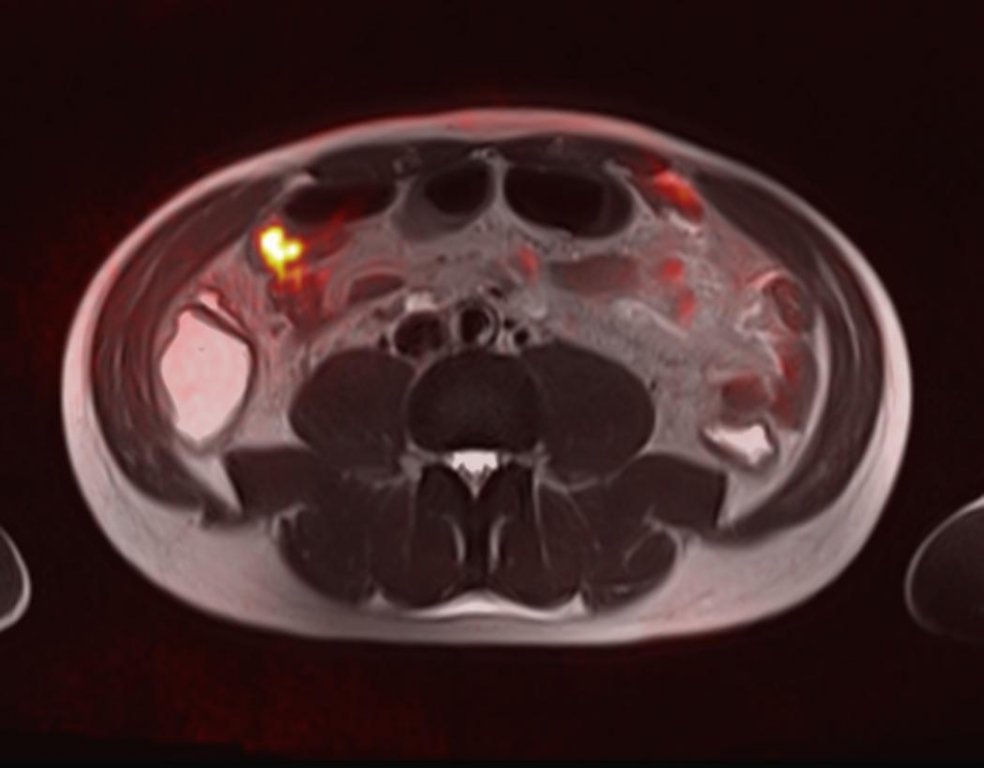