Non-suspected cause of insufficiency fracture

Categories
Area of Interest Bones, Extremities, Musculoskeletal joint, Musculoskeletal system, Musculoskeletal bone ; Imaging Technique MR
Procedure Diagnostic procedure ; Special Focus Trauma ;
Show more Show less
Download as PDF Print Show related cases Notify admin
Clinical History
8-year-old male patient who presented with a history of pain in the right foot and ankle after a trivial trauma. A radiography was performed, which showed no relevant findings. After a week of pain that did not respond to analgesic medication, an ankle sprain was suspected and a MRI was requested.
Imaging Findings
Right ankle:
A patchy osseous oedema comprising the ankle, hindfoot and metatarsal bones is observed, with fluid distension of the antero-lateral recess. No soft-tissue oedema is observed.
The aforementioned findings are related to low intensity subchondral linear lesions affecting the distal tibia, the talar dome, and the posterior tuberosity of the calcaneus. There is also a high signal intensity that affects the epiphyseal plate of the distal tibia, in keeping with oedematous changes.

Left ankle:
A diffuse osseous oedema of the talus, more remarkable in its neck, is seen. Also, slight patchy signal alteration of the periphery of the calcaneus and the distal tibia is observed, consistent with oedema. No significant joint effusion is seen.
Discussion
Insufficiency fractures are a subtype of stress fracture, they are commonly seen in the context of osteoporosis, hence more frequently in elderly women. [3] Nevertheless, any other process which weakens the bone structure can be a risk factor for the development of insufficiency fractures. The most common locations are found in the axial skeleton: vertebrae, sacrum, proximal femur, etc. [6]
In adults, a reduction of a 7% in bone mineral density (BMD) is associated with an increase of up to 50% of osteoporotic fractures. [5]
A decrease of up to 10% in BMD has been described in children receiving antiepileptic drugs, specifically Valproate, when compared to controls. Therefore when assessing a child under Valproate treatment who presents bone or articular pain, it is important to consider insufficiency fractures, which can be subtle or undetectable in plain films.
Chronic diseases and certain treatments may exert deletereous effects on bone health. Both restriction of the physical activity and pharmacological treatment come together as factors that can affect BMD in patients suffering epilepsy. Phenytoin and Phenobarbital have been associated to rickets and a decrease of BMD as an adverse effect of both Valproate and Carbamazepine were described during the '90s. [1, 2]

The typical presentation of an insufficiency fracture is that of progressively worsening pain in the context of a minimal trauma or no trauma at all. [6]

Conventional radiology is not useful for the diagnosis as it is initially normal in most of the cases. If performed moths after the onset of the symptoms, bone sclerosis and cortical thickening may be found in metaphyseal and epiphyseal fractures and periosteal reaction with or without formation of a callus has been described. [6] Magnetic Resonance Imaging (MRI) along with bone scan are the most sensitive tests for early diagnosis, MRI being of higher specificity not only to isolate the exact anatomic location but also to rule out alternative diagnosis such as tumours and infections. [4, 6]
The characteristic findings on MRI are low signal of the bone marrow in T1-weighted sequences and high signal, which extends into adjacent soft tissues, in fluid sensitive sequences (T2 and PD). After gadolinium-based contrast media administration, enhancement may be evident. Bone scans show intense isotope accumulation at the site of the fracture. [4, 6] 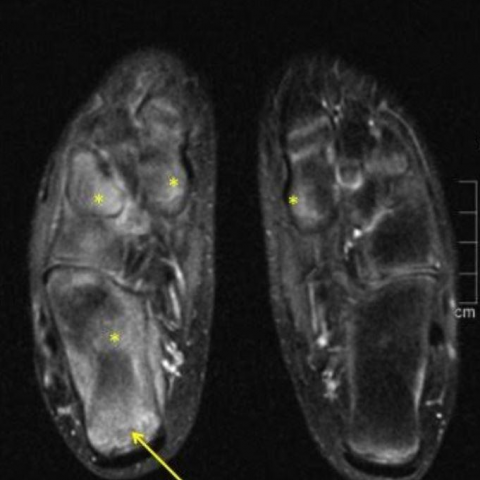 Axial FSE T2 image of both feet, showing osseous oedema (*), more remarkable on the right foot, as well as a trabecular fracture line affecting the posterior tuberosity of the right calcaneus (arrow).
Figure 2 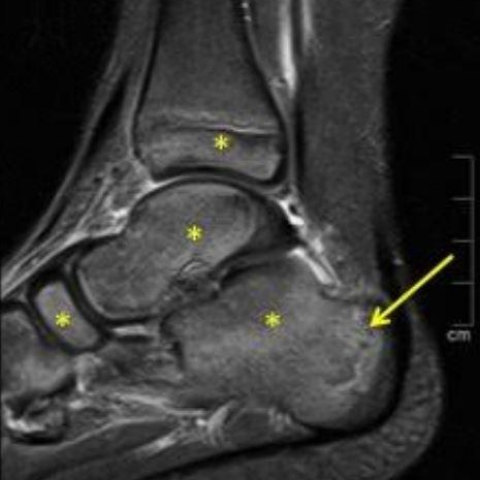 Sagittal TSE T2 Fat-Sat image of the right ankle, in which mild high signal patchy images are observed (*), consistent with oedema, as well as the fracture line in the posterior tuberosity of the calcaneus (arrow). 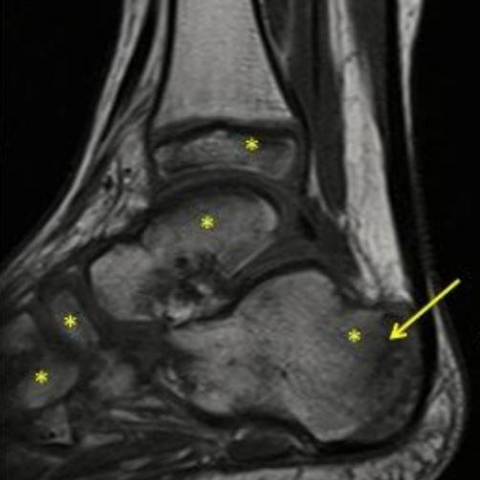 Sagittal SE T1 image of the right ankle, in which mild low signal patchy images are observed (*), consistent with oedema, as well as the fracture line in the posterior tuberosity of the calcaneus (arrow).
Figure 3 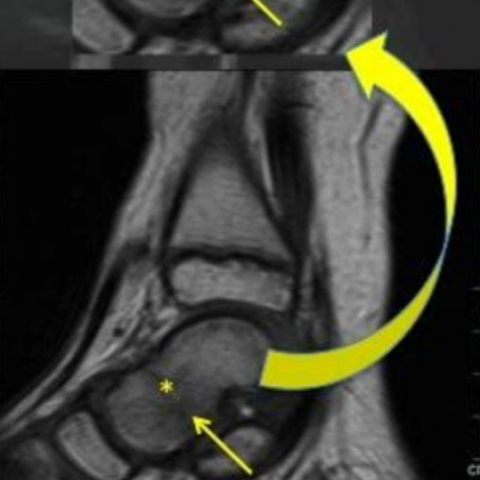 Sagittal SE T1 image of the left ankle, in which bony oedema in the talar neck is observed (*), associated to a fracture line (arrow). Detail of the talar bone in the upper image. 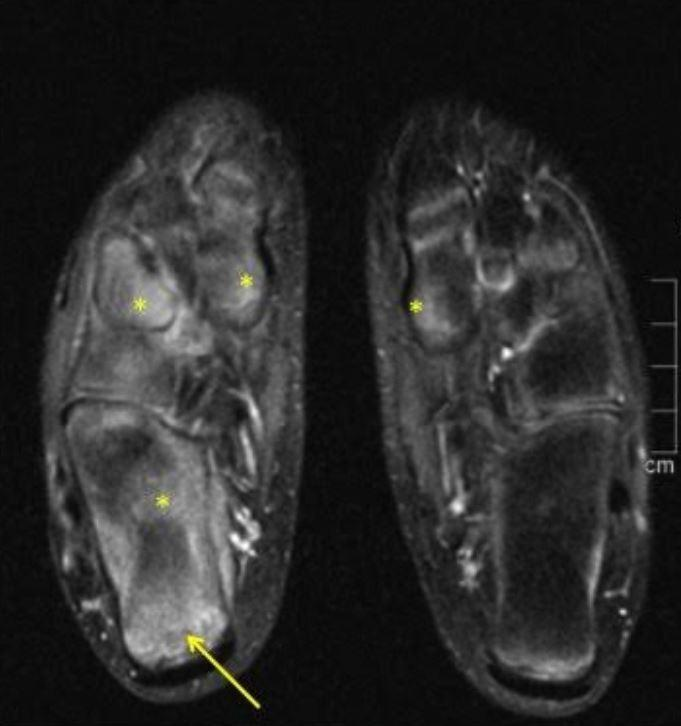 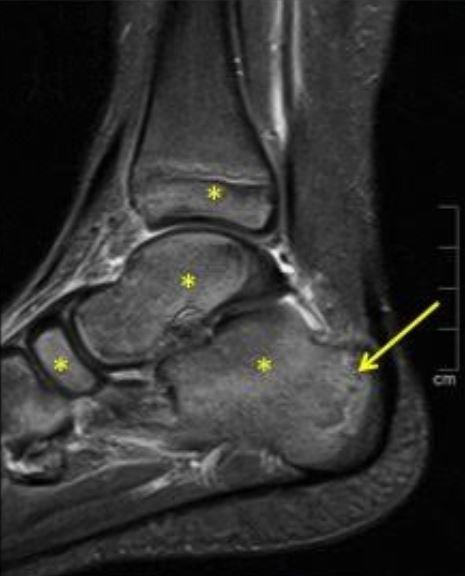 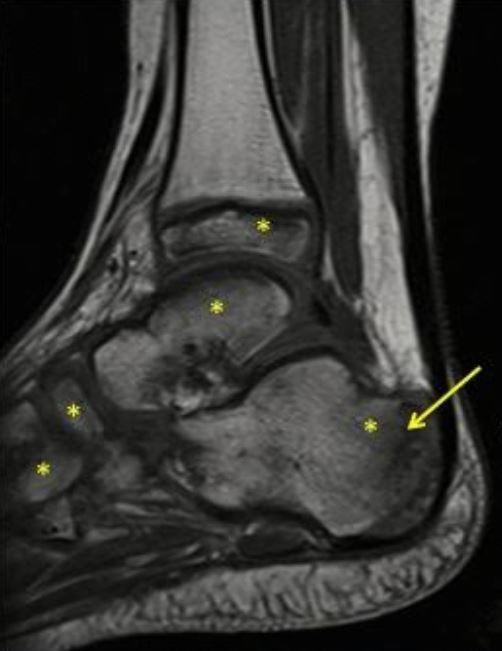 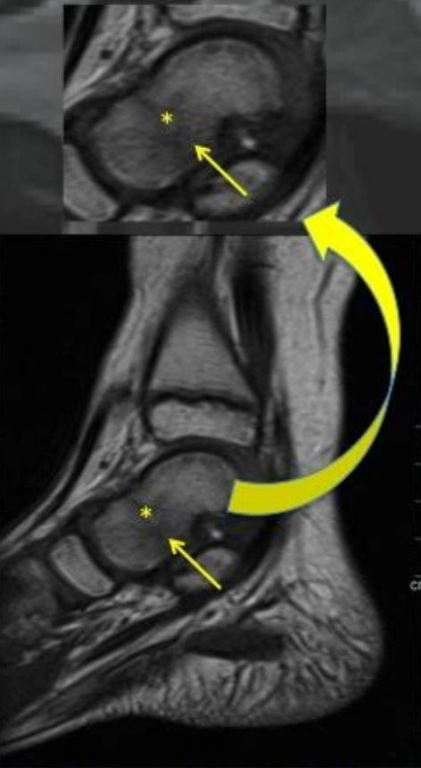 Sagittal SE T1 image of the left ankle, in which bony oedema in the talar neck is observed (*), associated to a fracture line (arrow). Detail of the talar bone in the upper image.
Hospital Universitario Doctor Negrín, Las Palmas de Gran Canaria, Spain.