The lesion is isointense to CSF on both T1 and T2 weighted images.

Figure 5 (a, b): The lesion shows diffusion restriction on DWI images with low ADC values.

Figure 6 & 7: Post-contrast T1 weighted images do not show enhancement.
Discussion
[A] An epidermoid tumour is a congenital lesion that arises from inclusion of ectodermal epithelial elements. The cerebellopontine angle is the most common site of occurrence of intracranial epidermoid tumours, accounting for 5% of tumours in this region [1]. Epidermoid cyst also occurs in the fourth ventricle (17%) and the sellar and/or parasellar region (10%–15%). Less common locations include the cerebral hemispheres or brainstem [2].

Grossly, epidermoid tumours are typically well-defined lesions with an irregular nodular outer surface and a shiny “mother of pearl” appearance. Microscopically, the wall of the epidermoid cyst consists of a layer of stratified squamous epithelium without vascularity. The cyst content is derived from desquamated epithelial cells composed mainly of keratin in concentric layers and cholesterol in a solid crystalline state [1].

[B] The symptoms produced by epidermoid are due to the mass effect of the tumour locally on the brain parenchyma, vascular elements and cranial nerves present alongside. The symptoms of epidermoid tumour are difficulty in hearing that account for 37.6%, trigeminal neuralgia 29.7%, facial palsy 19.4%, headache 17.9% and diplopia 16.7%. Other uncommon symptoms include seizures, changes in mental status, glossopharyngeal neuralgia and neuralgiform attacks of headache lasting for a short span of time [4]. The onset of symptoms occurs between the second and fifth decades of life [3].

[C] The best diagnostic clue is a CSF-like mass that insinuates within cisterns, encasing adjacent nerves and vessels. On CT scans, most epidermoid cysts are well-defined hypoattenuated masses that resemble CSF and do not enhance. Calcification is present in 10%–25% of cases. Most epidermoid cysts are isointense or slightly hyperintense to CSF on both T1- and T2-weighted MR images. They do not suppress completely on FLAIR images and restrict (show high signal intensity) on diffusion-weighted images. Most epidermoid cysts do not enhance, although some minimal rim enhancement occurs in approximately 25% of cases [2].

[D] Epidermoids cysts are not sensitive to radiation or chemotherapy; the treatment relies exclusively on surgical excision which depends on the location, size, structures involved and symptoms associated [3]. 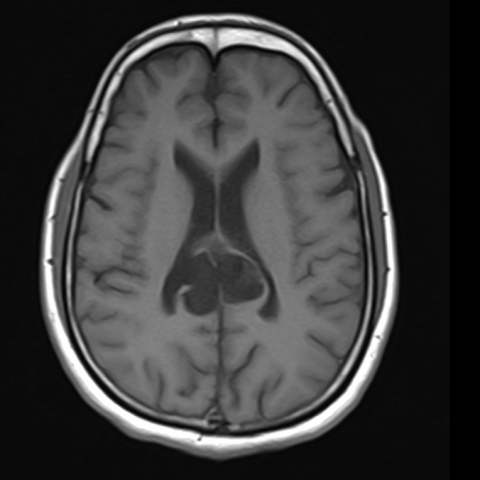 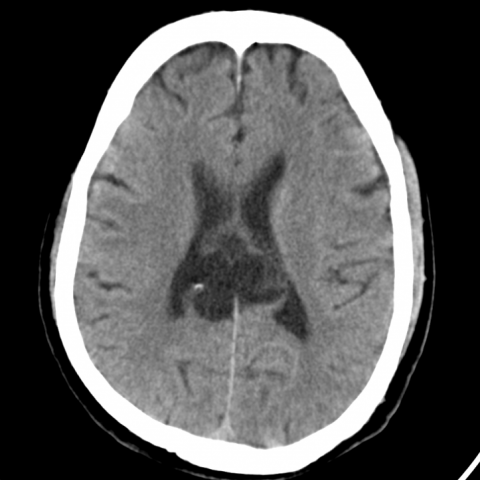 NCCT Brain Axial shows a well-defined lobulated CSF density lesion involving the splenium of the corpus callosum, causing mass effect in form of an indentation over the atrium of both lateral ventricles.
Figure 3 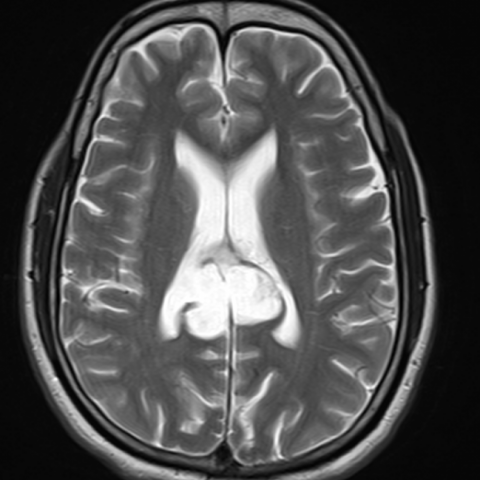 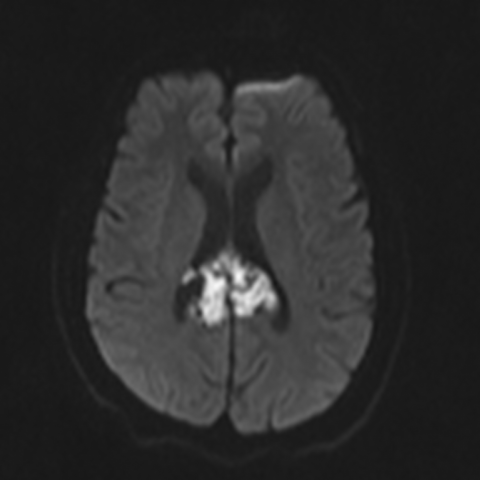 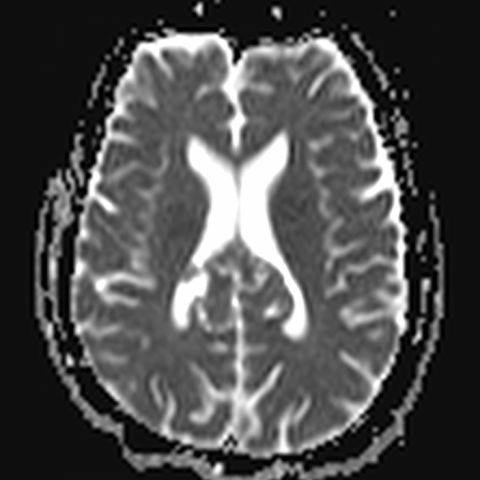 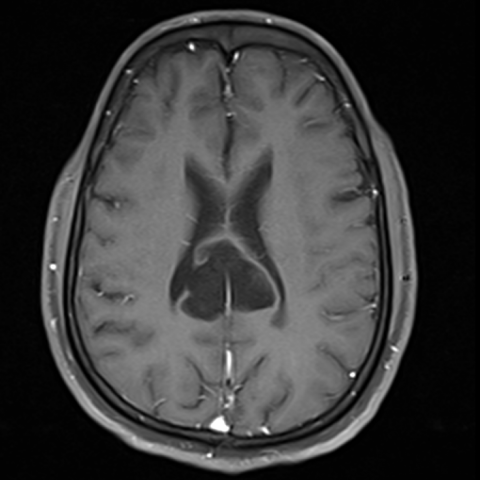 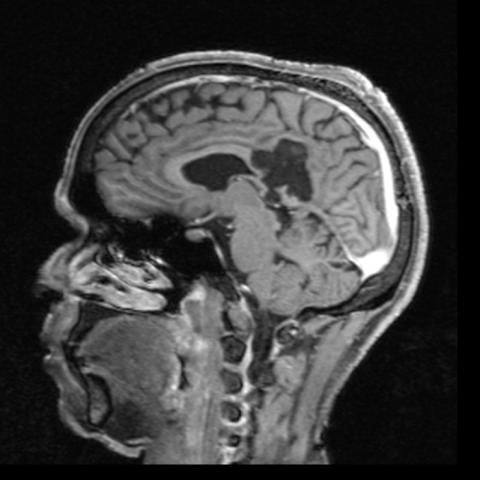 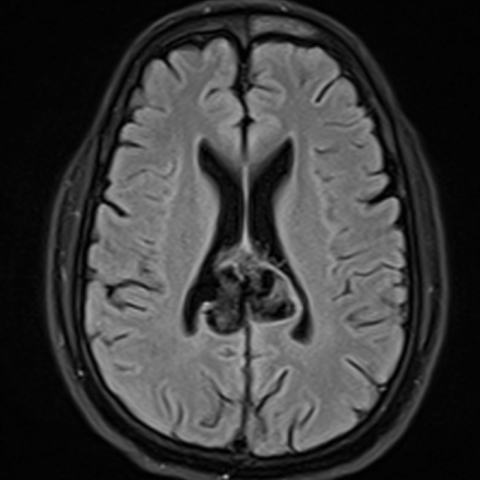 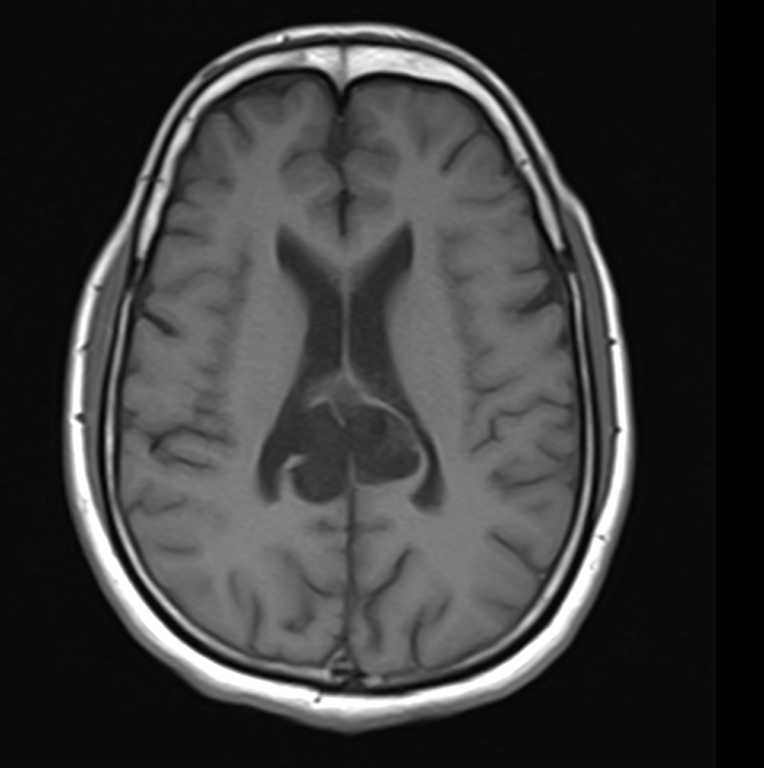 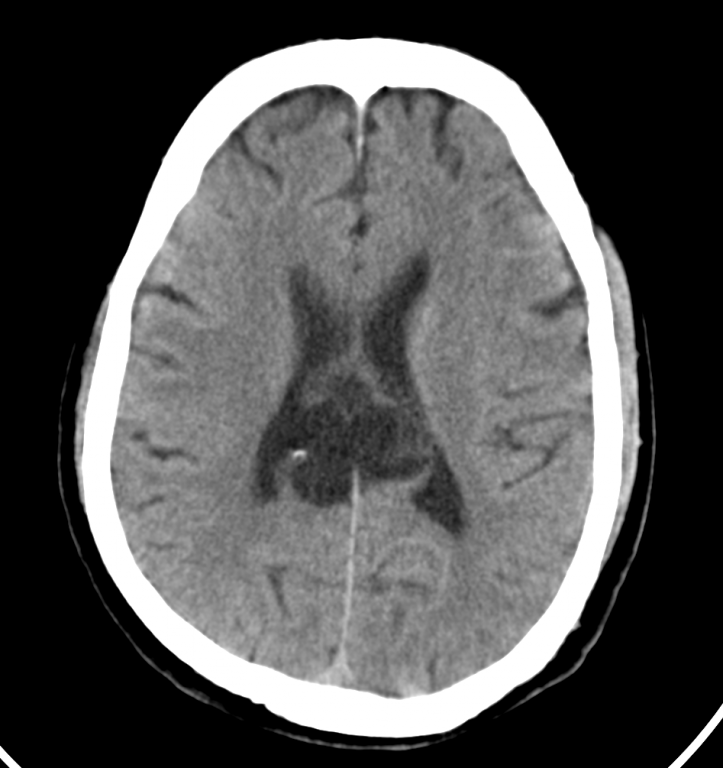 NCCT Brain Axial shows a well-defined lobulated CSF density lesion involving the splenium of the corpus callosum, causing mass effect in form of an indentation over the atrium of both lateral ventricles.
Department of Radiology, C.U.Shah Medical college and hospital, Surendranagar, Gujarat, India. 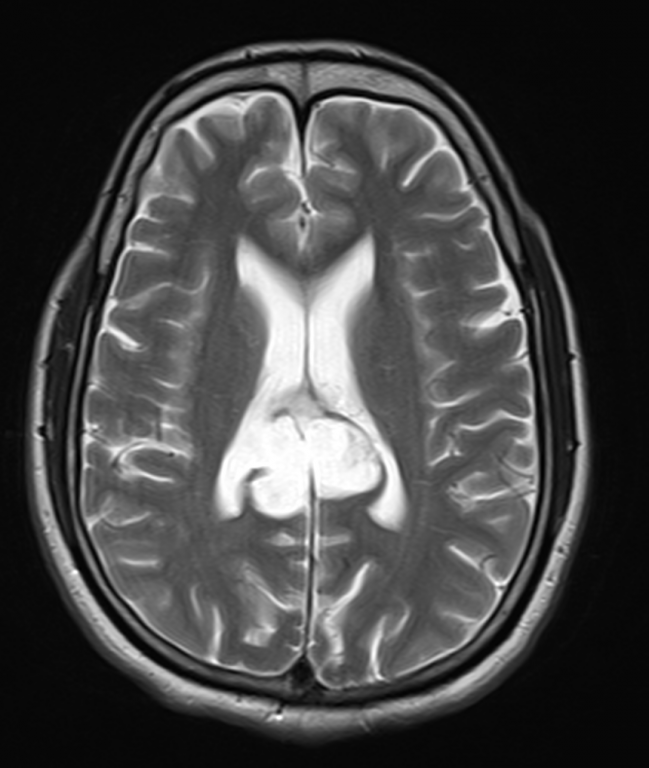 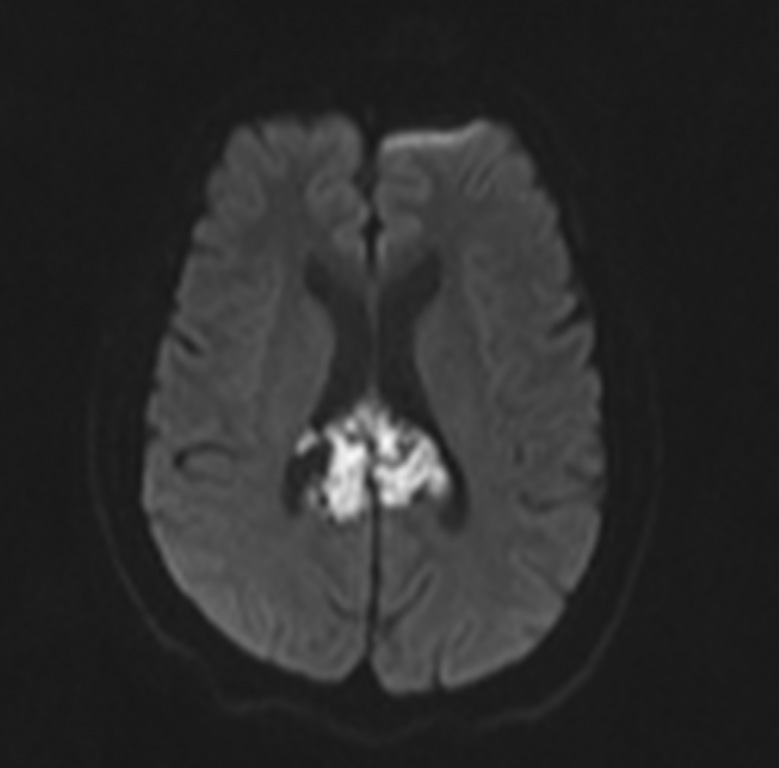 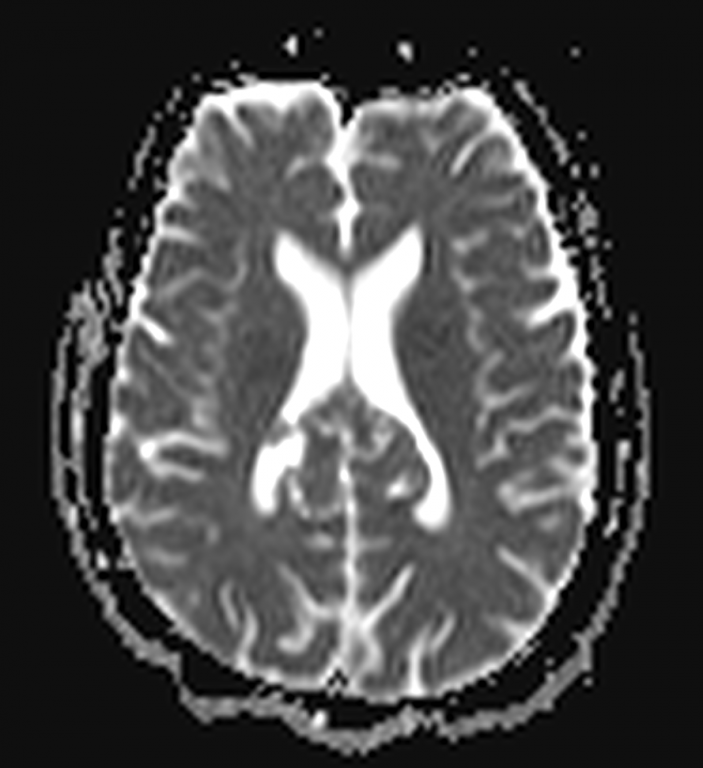 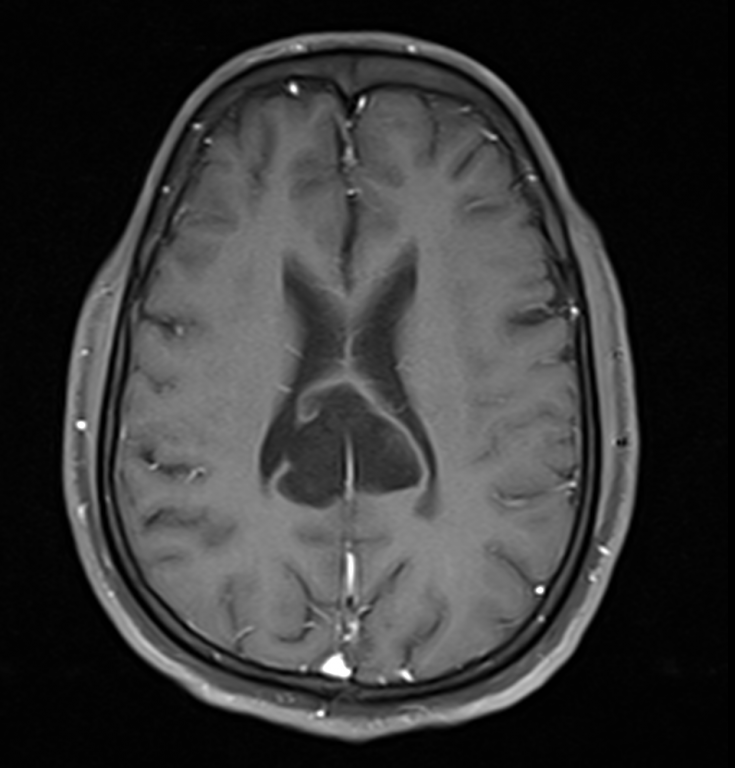 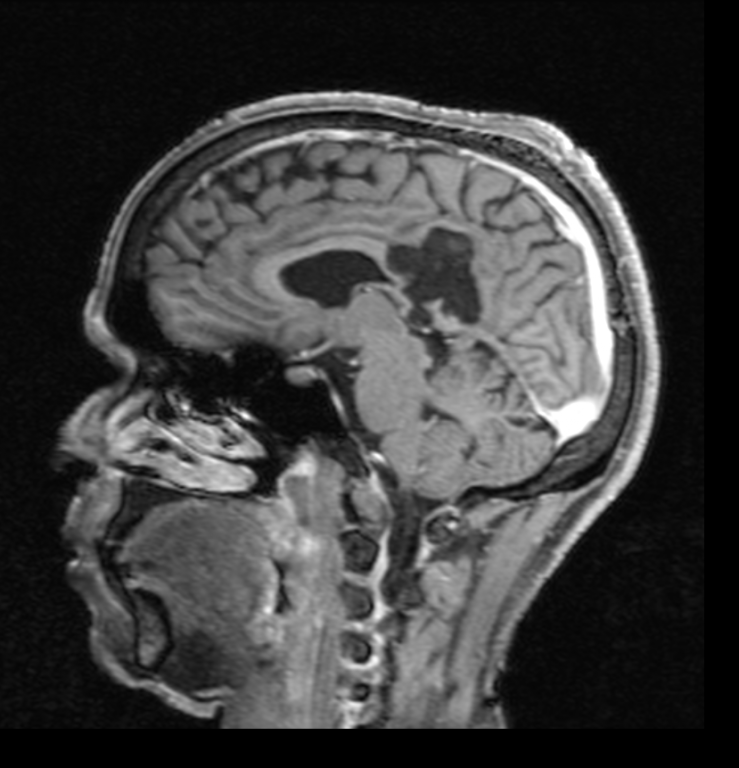 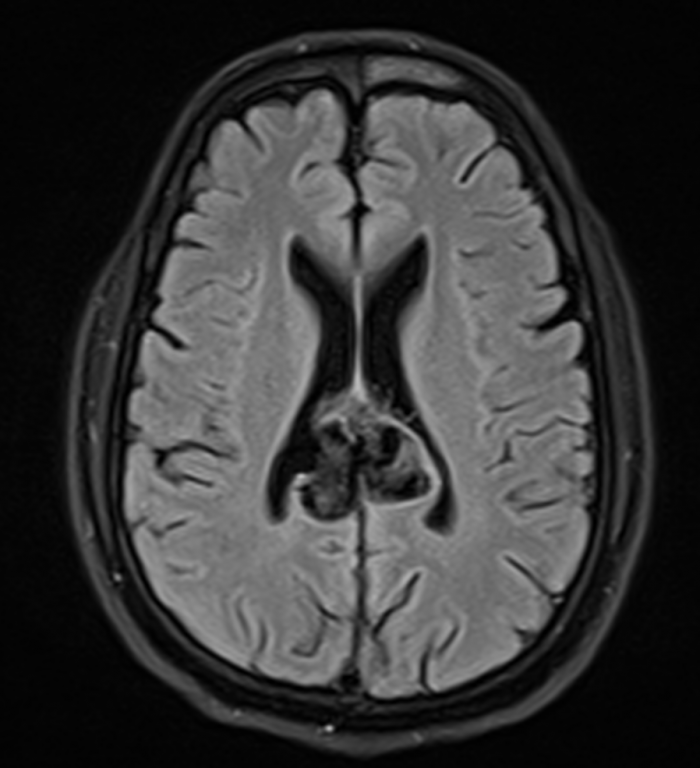