Rupture of an ovarian teratoma

Categories
Area of Interest Abdomen ; Imaging Technique CT, Experimental
Procedure Contrast agent-intravenous, Diagnostic procedure ; Special Focus Cysts ;
Show more Show less
Download as PDF Print Show related cases Notify admin
Clinical History
A 68-year-old female psychiatric patient was admitted to the emergency department because of vomiting and diarrhoea for about two days. Clinical examination revealed marked abdominal distention, bubbling sounds at auscultation and diffuse tenderness of the abdomen. For further work-up an abdominal CT was performed.
Imaging Findings
Contrast-enhanced (CE) CT showed a large mass in the pelvis containing fluid, fat and a tooth (Fig. 1). A rim of fat was seen at the outer upper border of the mass, surrounded by intra-abdominal fluid (Fig 1a, c). Perisplenic and perihepatic intra-abdominal fluid as well as subdiaphragmatic areas of low density mimicking intraperitoneal air were seen in the upper abdomen (Fig 2a, 1c). Changing the window setting from parenchymal to pulmonary window revealed that the density of these subdiaphragmatic foci was different from pulmonary air and similar to fat on the Hounsfield scale (Fig. 2b).
Discussion
Ovarian teratomas account for about 20% of ovarian neoplasms in adults [1, 2]. Mature cystic teratoma is the most common subtype containing sebaceous secretions, hair and teeth [1, 2]. Histologically this subtype consists of a cyst with an epidermal-like epithelial lining with intralesional components of endoderm, ectoderm and mesoderm [2]. The immature subtype contains also these three components but additional embryogenic tissue is always found in this subtype with malignant biological behaviour [1]. Mature cystic teratomas grow slowly at a rate of 1.8 mm each year and remain usually asymptomatic. Therefore they often present as an incidental finding on imaging performed for other reasons [1, 3, 4]. On ultrasound, a Rokitansky nodule containing hair, teeth and fat can cause an acoustic shadowing which is pathognomonic for mature teratomas [1]. The “tip of the ice berg sign” can provoke acoustic shadowing caused by a collection of hair floating on top of the sebum [1]. On CT one should look for the typical three components: fat, fluid and teeth [1]. Complications such as infection, torsion or rupture are relatively rare [2, 5]. The most common complication is torsion (5-15%) of the ovarian pedicle, sometimes associated with small bowel obstruction in case of adherence of the bowel to the cyst wall [1, 3, 4]. Obstruction due to mass effect of large lesions has also been reported [4]. Infection (1.2 %) is a far less frequent complication [2]. Rupture (0.7-3.8%) of a mature teratoma is also unusual because the capsule of the lesion is often thick whereas in the immature variant this complication is more common [1, 3, 4]. Although torsion, infection, trauma, prolonged pressure caused by pregnancy or malignant transformation are considered potential aetiologies, often the precise cause of the rupture is not obvious like in our case [3]. An intraperitoneal fat-fluid level on CT can be diagnostic for a ruptured teratoma [3]. Leakage of sebaceous liquid can cause chemical peritonitis with possible secondary bowel obstruction [1, 2, 3]. In our case, the intra-operative view revealed indeed chemical peritonitis due to a ruptured ovarian teratoma (Fig. 3). On imaging, it is important to differentiate between free intraperitoneal air caused by gastrointestinal perforation and teratoma rupture with spilling of intra-abdominal fat, which may cause chemical peritonitis. Therefore, meticulous and adjusted window setting is mandatory to avoid misinterpretation of fat-fluid levels as free subdiaphragmatic air.
Differential Diagnosis List
Rupture of a teratoma with signs of chemical peritonitis
Free intraperitoneal air due to a gastro-intestinal perforation
Rupture of a teratoma with chemical peritonitis
Peritonitis carcinomatosa
Infectious peritonitis
Final Diagnosis
Rupture of a teratoma with signs of chemical peritonitis
References

CE CT of the pelvis 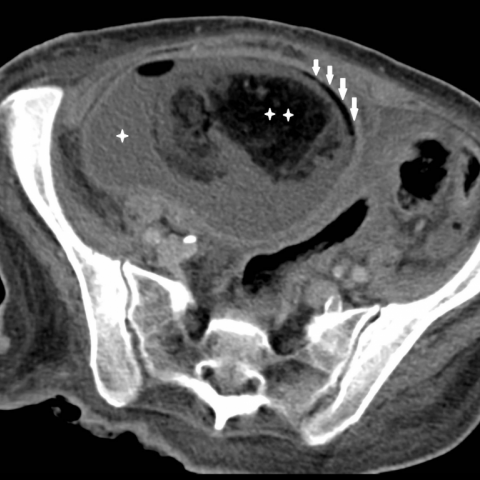 Contrast-enhanced CT of the pelvis showed a large mass lesion within the pelvis. There was intra-lesional fat (double white asterisks) and fluid (single white asterisk). The white arrows mark a peripheral fatty rim. 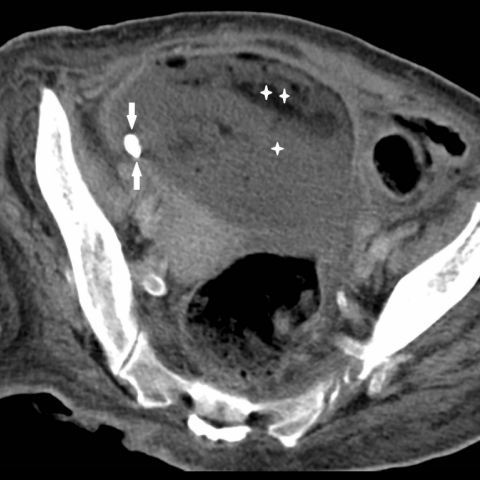 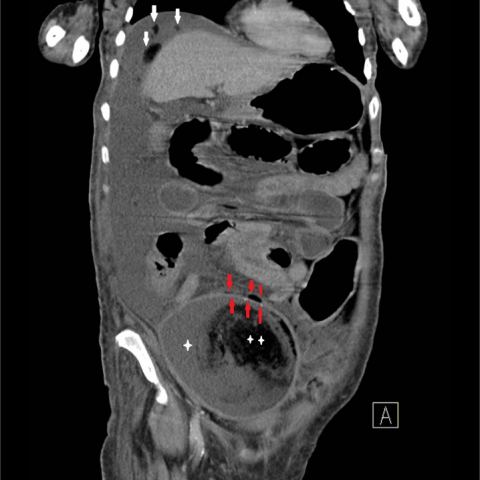 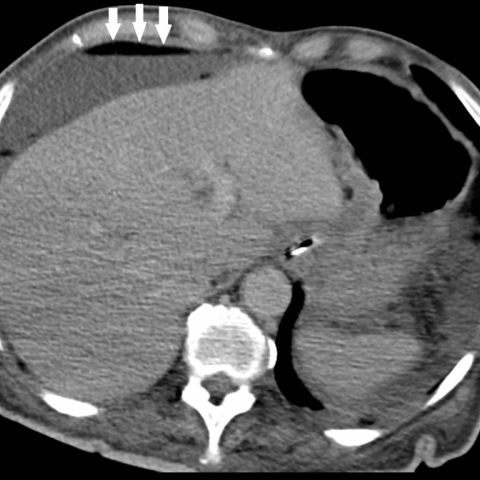 Parenchymal window: There was free abdominal fluid around liver and spleen as well as areas of low density simulating free air (white arrows). 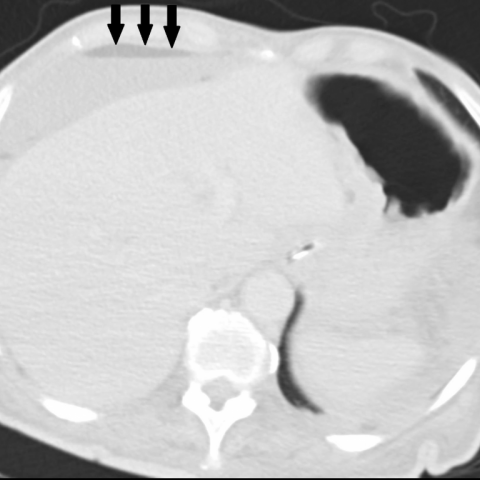 The areas of low density (black arrows) have a different density than that of the stomach and the air within the lung. The density of these areas are similar to the density of retroperitoneal fat.
Figure 3 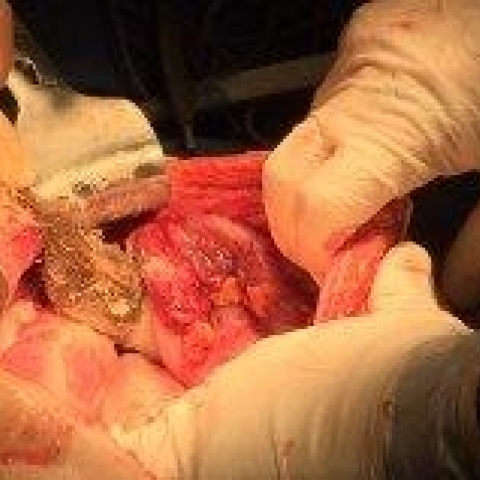 The exploratory laparotomy revealed a ruptured teratoma with intra-lesional hair and diffuse white-green sebaceous fluid throughout the abdomen.

CE CT of the pelvis 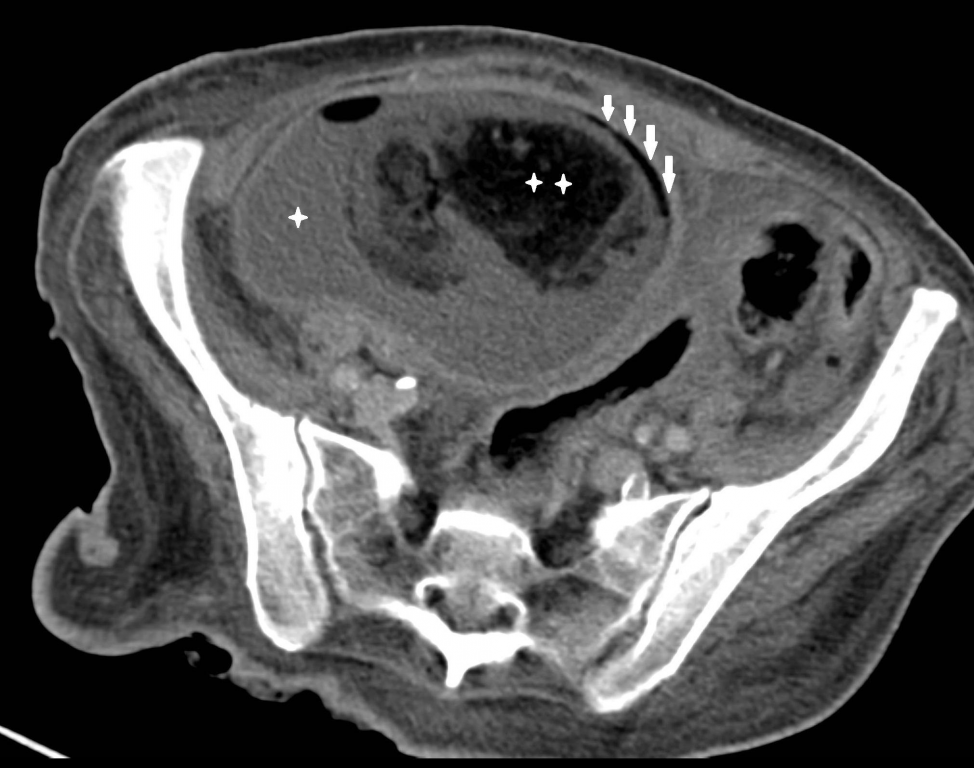 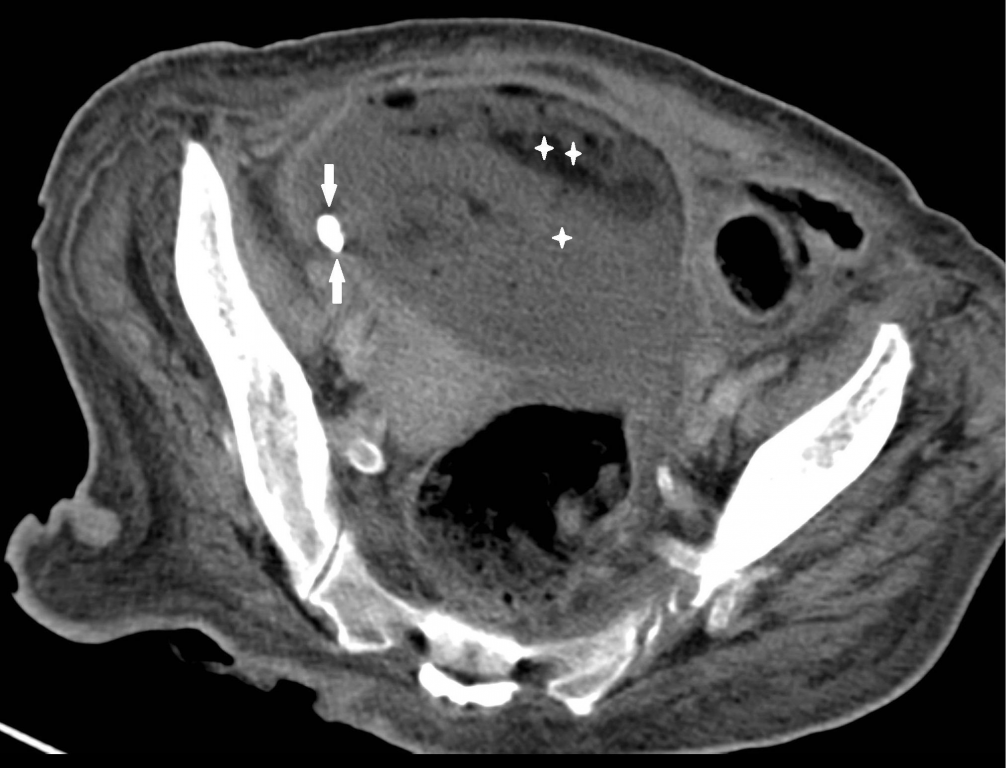 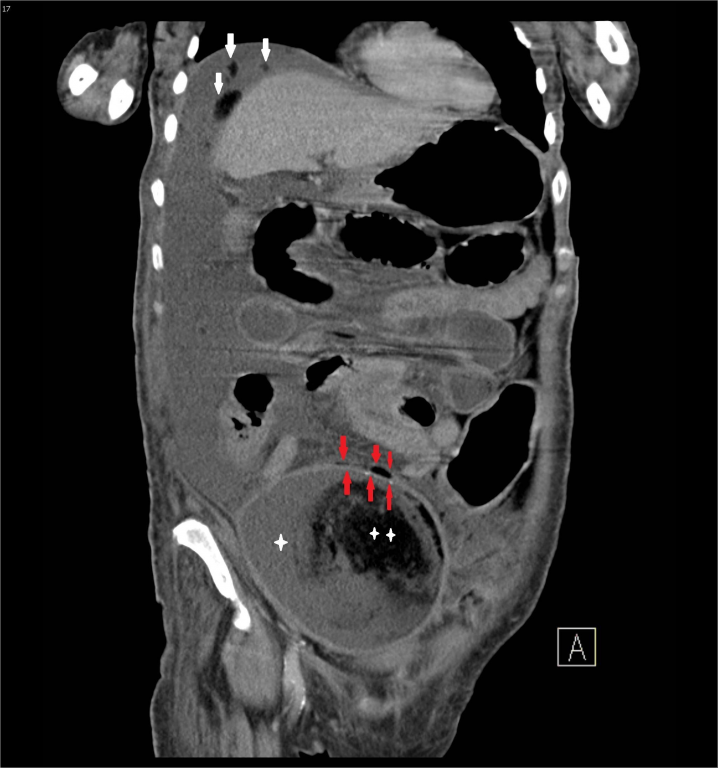 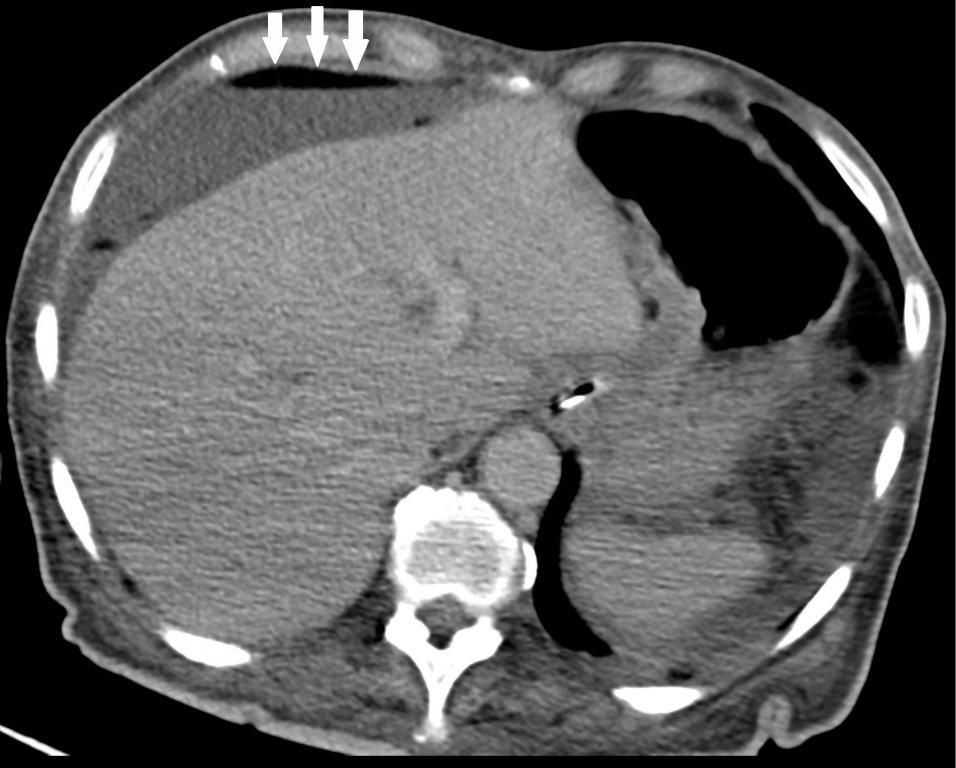 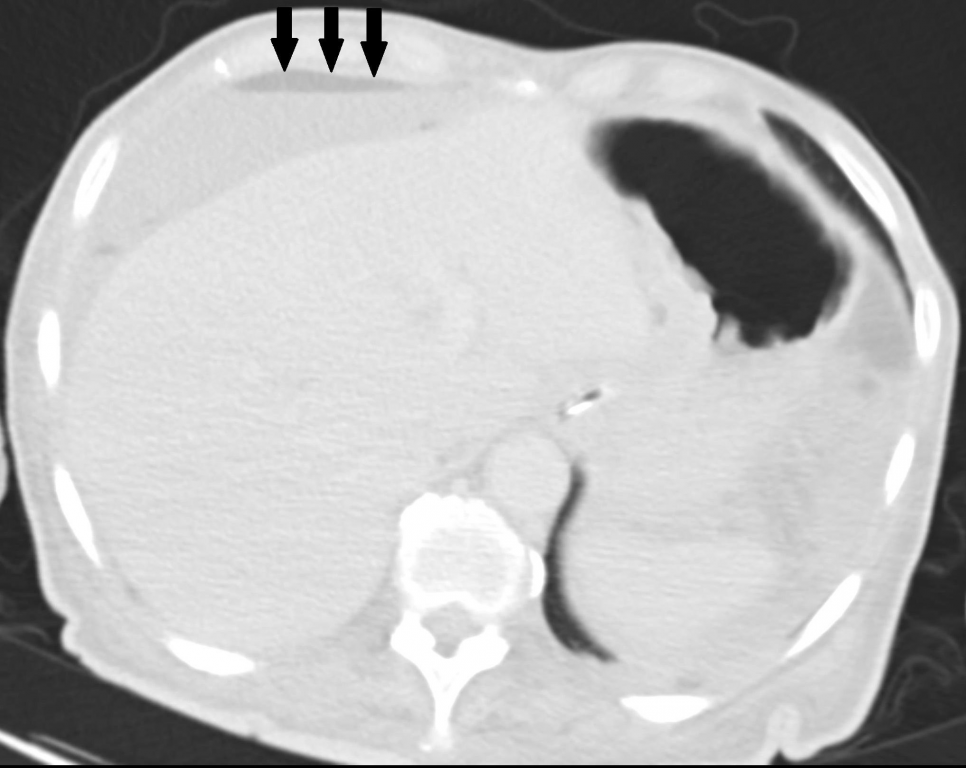 The areas of low density (black arrows) have a different density than that of the stomach and the air within the lung. The density of these areas are similar to the density of retroperitoneal fat.
F. Vanhoenacker Phd, MD, Department of Radiology, AZ Sint Maarten Hospital Duffel, Belgium 2015. 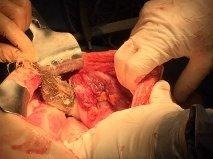