An interesting case of a parasite in the breast tissue

Categories
Area of Interest Breast ; Imaging Technique Percutaneous, Mammography, Ultrasound, Ultrasound-Colour Doppler
Procedure Sampling, Screening, Diagnostic procedure, Biopsy ; Special Focus Parasites, Cysts, Tropical diseases ;
Show more Show less
Download as PDF Print Show related cases Notify admin
Clinical History
A 49-year-old asymptomatic woman underwent routine screening mammography. This revealed an abnormality in the left breast and further investigations were advised.
Imaging Findings
The screening mammogram (Fig. 1) revealed a 10mm round mass in the upper-outer quadrant of the left breast (anterior-third) with obscured posterior margins—BIRADS 0. No calcifications, spiculated mass or significant axillary lymph nodes were noted. She was recalled for further clinical assessment, which revealed a palpable lump in the area of concern on mammography, and an ultrasound (US) was advised. Breast US (Fig. 2), in the area of mammographic abnormality, revealed a 12x10 mm thick-walled cyst with a 2 mm polypoidal lesion (without internal vascularity) arising from its non-dependant wall—BIRADS 4a. No other focal abnormality was seen in the rest of the left breast. Ultrasound-guided biopsy of the complex cyst was performed (Fig. 3) without complications. Histopathology (Fig. 4) revealed larva of the cysticercal parasite with surrounding giant cell reaction. Clinical follow-up after a two-month course of albendazole showed no abnormality on palpation or imaging (Fig. 5).
Discussion
Cysticercosis, which is caused by Taenia solium larvae, is a common parasitic infection of the soft tissues [1]. Humans become occasional hosts by eating undercooked vegetables or pork contaminated by eggs of T. solium or regurgitation of eggs into the stomach from intestines of people harbouring a gravid worm. This parasitic infestation is endemic in Asia, Latin America and Central & South Africa [2]. It can affect multiple organs like brain, spinal cord, orbit, muscles, subcutaneous tissue, breast and heart.

Clinical features depend upon the location of the cyst, number of cysts and host response [3] and a history of residence or travel in endemic regions may provide a diagnostic clue. Among soft tissue infestations, subcutaneous lesions may present as painless or painful subcutaneous nodules and intramuscular cysts as myalgia, mass, pseudotumour or pseudohypertrophy. In the breast, an uncommon location of affliction [4-7], they can manifest in the form of a lump (painful or painless) making the clinical diagnosis a myriad of possibilities ranging from cysts (simple, complex or complicated), abscess, fibroadenoma or malignancies, to name just a few. Radiological investigations are necessary for characterisation, defining complications such as cyst rupture or associated abscess formation and image-guided biopsies. Mammogram can reveal masses, lymphadenopathy or even calcified worm-like density [8]. The characteristic finding on an US is of a complex cyst with an echogenic focus along the wall, which represents the scolex. In chronic cases, these lesions tend to calcify. Magnetic resonance Imaging has a role when the parasite is viable, where peripheral enhancement of the cyst wall can be demonstrated. Definitive diagnosis is made by tissue sampling, which reveals presence of a scolex and surrounding host response in the form of inflammatory cell infiltration with histiocytes and epitheloid cell granulomas [9]. 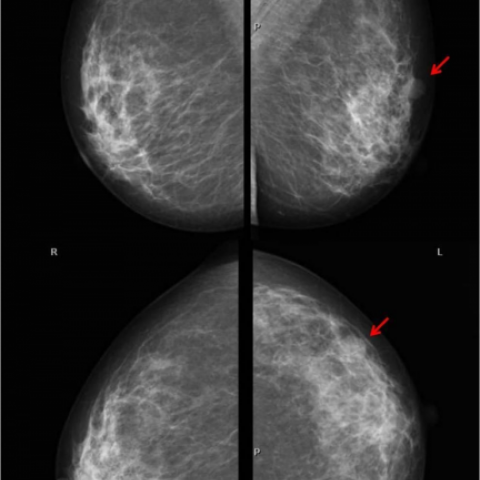 A 10 mm round density (red arrows) with obscured posterior margins in the upper-outer quadrant of the left breast. BIRADS 0. No significant axillary lymph nodes, calcifications or spiculations noted.
Figure 2

Breast US, in the area of mammographic abnormality 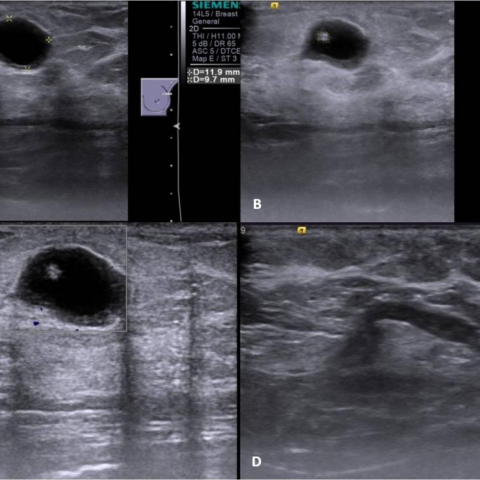 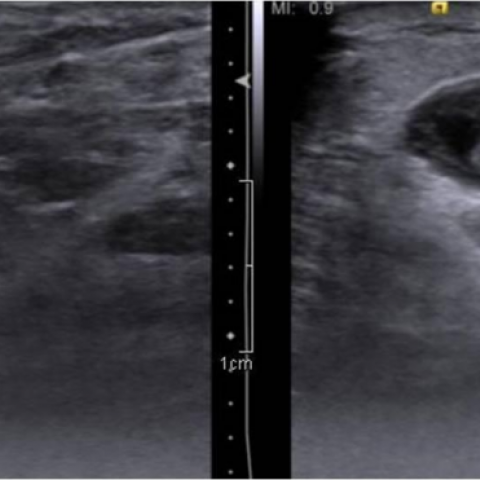 Performed with a 11G needle (red arrow) through the polypoidal lesion ‘scolex’ (green arrow) along the wall of the cyst (yellow arrow).
Figure 4 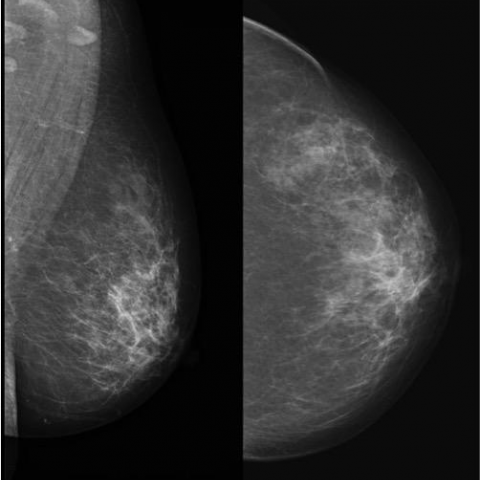 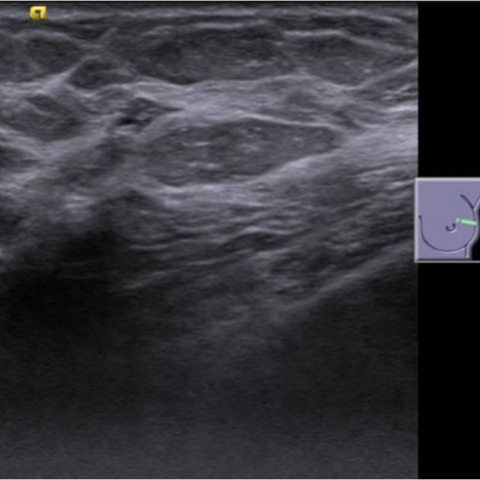 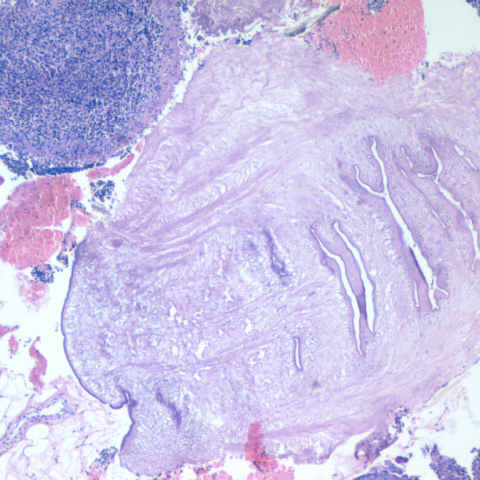 Dense lymphoplasmacytic inflammatory infiltrate with epitheloid cell granuloma and larva of cysticercal parasite (racemose cyst wall). There was a giant cell reaction around the larva. 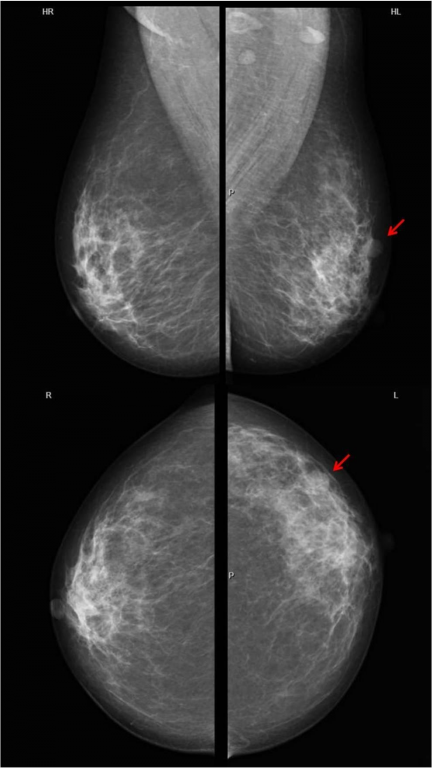 A 10 mm round density (red arrows) with obscured posterior margins in the upper-outer quadrant of the left breast. BIRADS 0. No significant axillary lymph nodes, calcifications or spiculations noted.
Parakh A, Department of Radiology, Medanta, Gurgaon

Breast US, in the area of mammographic abnormality 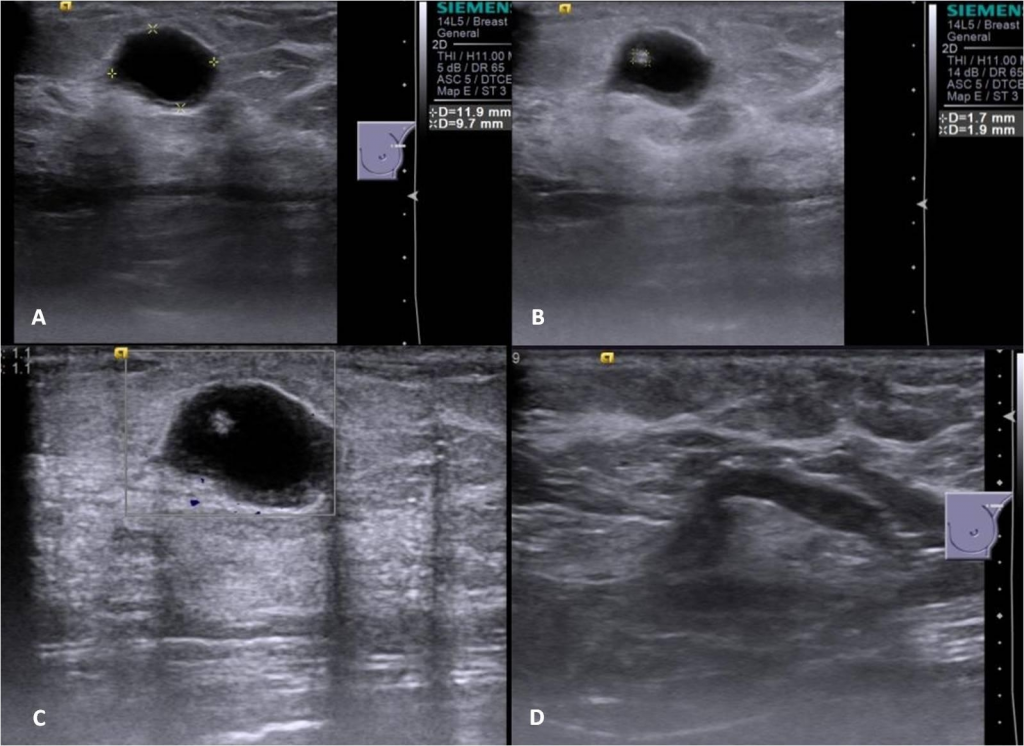 A 12x10 mm thick-walled cyst (A) with a 2 mm polypoidal lesion arising from the non-dependant wall (B) showing no colour-uptake on power Doppler (C). BIRADS-4a. No significant left axillary lymph nodes noted (D).
Parakh A, Department of Radiology, Medanta, Gurgaon

Performed with a 11G needle (red arrow) through the polypoidal lesion ‘scolex’ (green arrow) along the wall of the cyst (yellow arrow).
Arora J., Department of Radiology, Medanta, Gurgaon 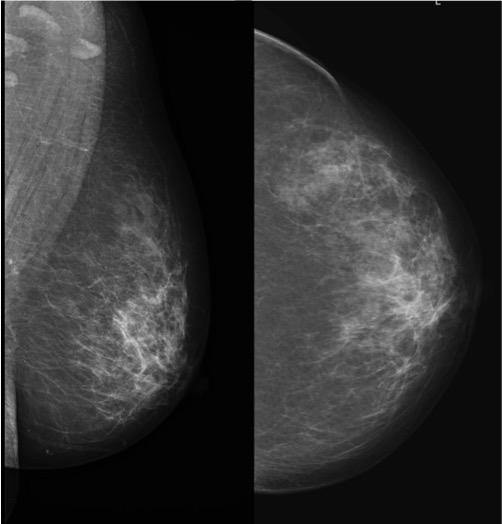 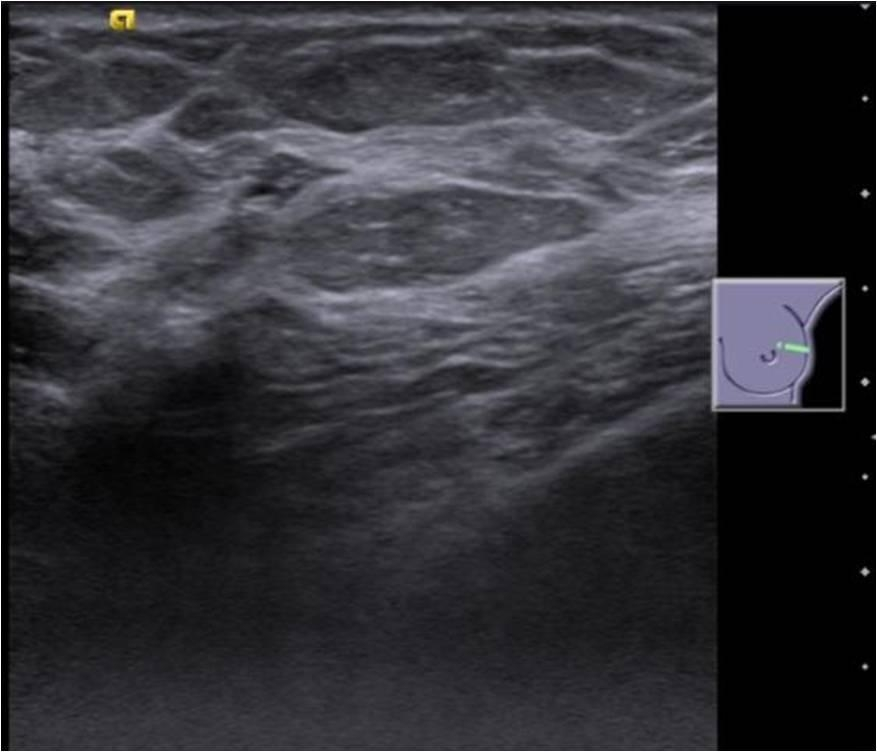 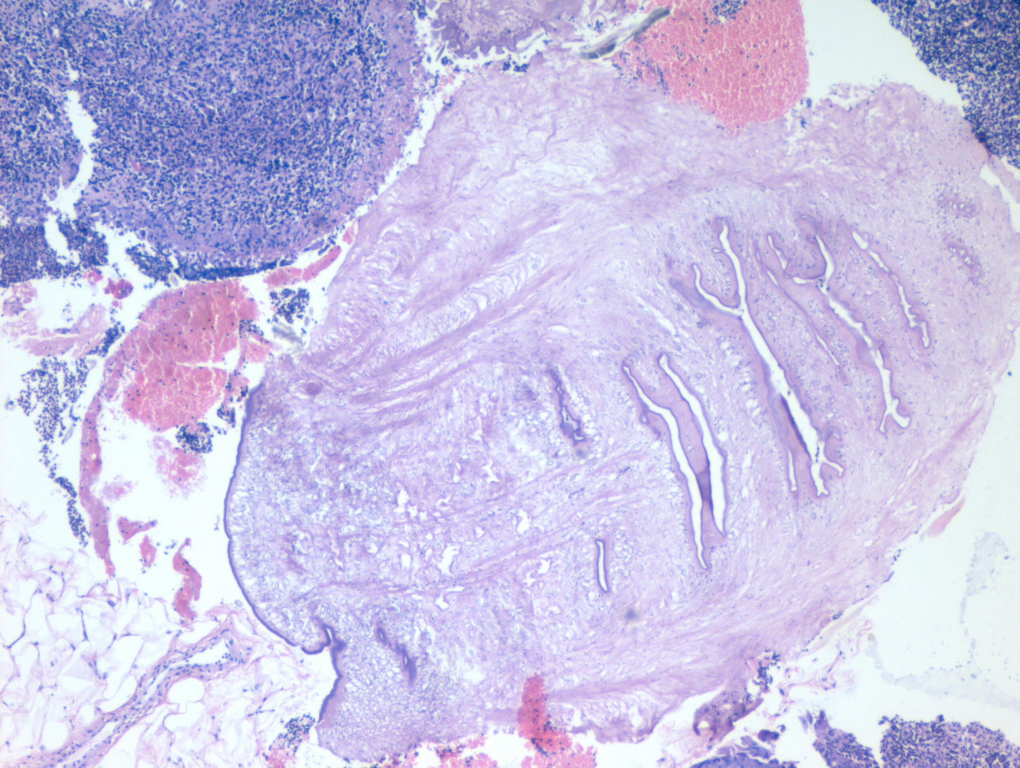