On magnetic resonance imaging the lower half of the L2 vertebral body showed a focus of signal abnormality that on T2-weighted images was characterised by a "target-type" appeareance (a high signal intensity lesion with low signal intensity peripherally and in the centre). On post-contrast T1-weighted images the lesion showed a thin peripheral rim of enhancement. The lesion was associated with bone marrow oedema and lower end-plate lysis. The L2/L3 intervertebral disc was slightly decreased in height and showed constantly a low signal intensity on both T1- and T2-weighted images in the absence of significant enhancement. Prominent epidural soft tissue was seen on the anterior and posterior left lateral aspect of the spinal canal causing slight impingement and dislocation of the thecal sac. On the CT image a higher attenuation of the spongiform bone trabeculae surrounding the lesion was seen. A biopsy of the lesion and a culture of the bioptic material were performed and the definitive diagnosis was: Staphylococcus aureus spondylitis.

Discussion
The key feature in this case is the observation of a preminently pure infective spondylitis rather than the more frequently observed spondylodiscitis. In intravenous drug abusers clinical diagnosis of spondylitis may be difficult due to extraspinal abnormalities overshadowing the vertebral alterations. Diagnosis may be difficult also in patients with operated disc herniation, in young children and in paraplegic or para-quadriplegic patients (1). With diffusion of MRI into everyday clinical practice the reported frequency of vertebral osteomyelitis and disc space infection has risen dramatically from less than 1% to 2-4% of all cases (1). In adults haematogenous spread of infection to the subchondral regions of the vertebral endplate adjacent to the intervertebral disc is followed by endplate perforation, extension to the contiguous vertebral body and narrowing of the interposed intervertebral disc (1). Infection may then extend to the ventral and/or dorsal surface of the vertebra in a subligamentous fashion and eventually to the surrounding soft tissues. After a variable period (4 to 10 weeks) a reactive osteosclerotic response of the surrounding bone is observed (1).

In this case narrowing of the intervertebral disc in the absence of signal abnormality and postcontrast enhancement could be generically ascribed to chronic degenerative disc disease thus misleading the diagnosis. On the other hand a bony fragment within the lesion was highly suggestive of an osteomyelitic process as well as the accompanying osteosclerotic response of the spongiform bone. This is reported to be a helpful sign in differentiating pyogenic from tuberculous spondylitis (2,3). Tuberculous and other granulomatous spondylitis (syphilis, sarcoidosis and fungal disorders) are usually characterised by a slowly progressive vertebral lesion, preservation of the intervertebral disc, subligamentous spread with erosion of the anterior vertebral margins, large prevertebral soft tissue abscesses usually involving the psoas muscles and absence of severe bony sclerosis (eburnation). On the other hand pyogenic spondylitis is more frequently characterised by a rapid loss of the intervertebral disc height (usually associated with high T2 signal hyperintensity and enhancement on MR), posterior extension of the process (epidural abscess) and marked early reactive bony eburnation. The latter is usually missed on MR and very well appreciated on CT scans. Several other processes may produce similar abnormalities on MRI.

Primary (focal and systemic) or metastatic neoplasias should also be included in differential diagnosis. Certain tumours such as plasma cell myeloma, lymphoma, chordoma, giant osteoblastoma and even skeletal metastases can extend around the intervertebral disc to involve the neighbouring soft tissues. The combination of focal or widespread lysis or sclerosis of a vertebral body and an intact intervertebral disc is much more characteristic of tumour than infection (4). 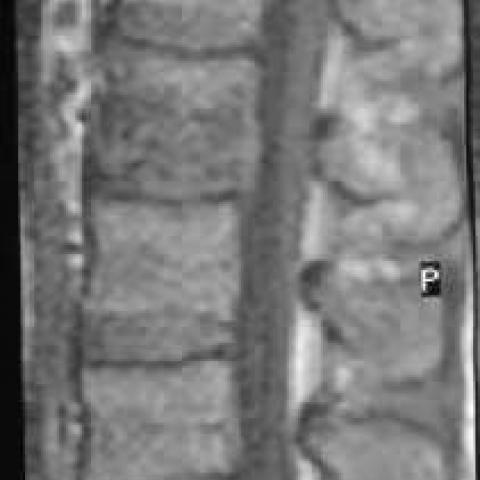 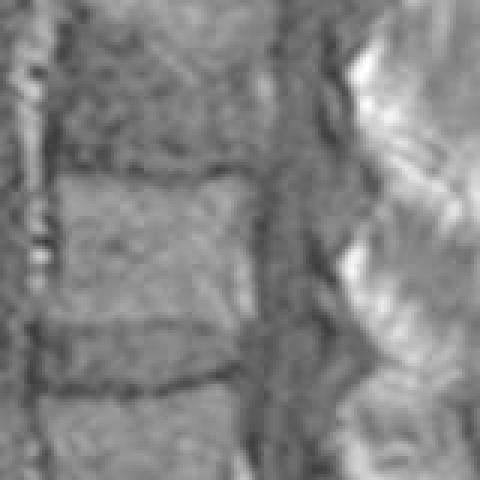 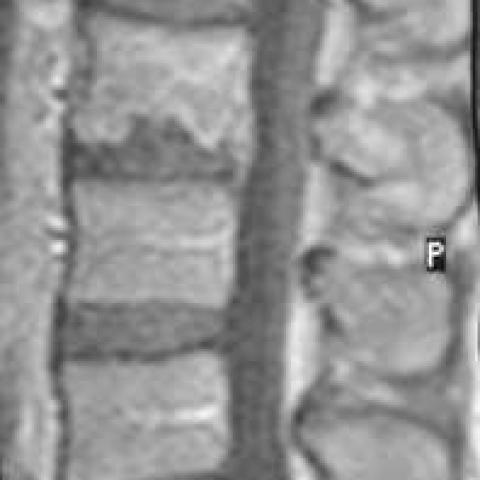 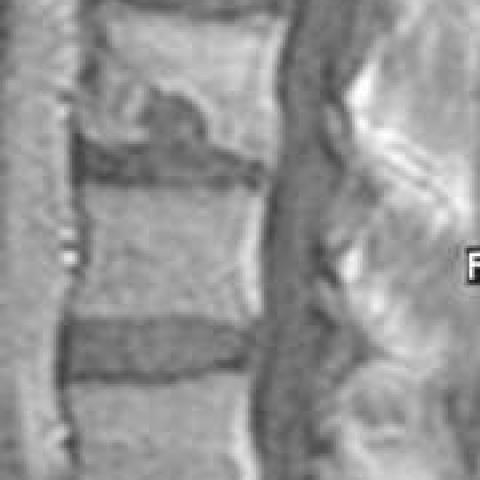 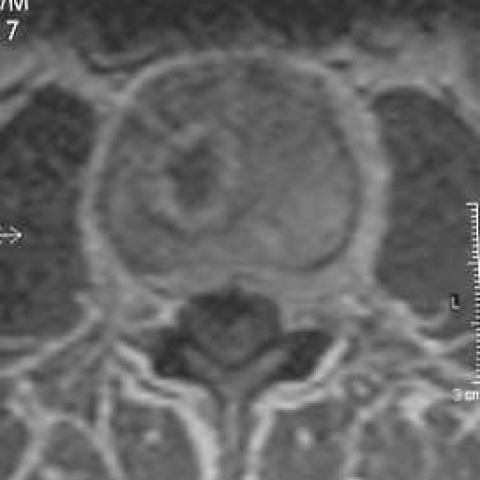 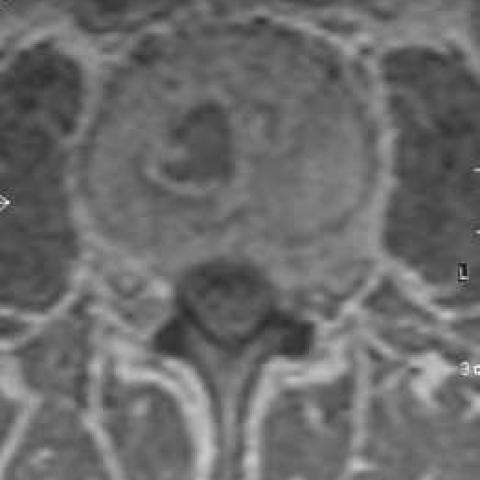 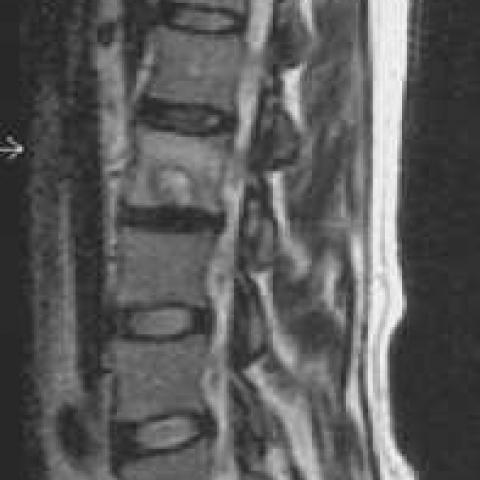 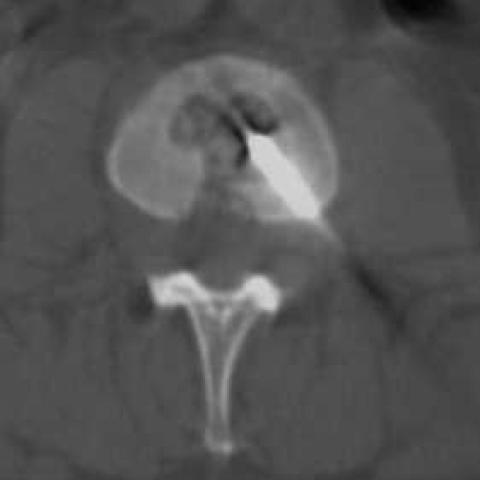 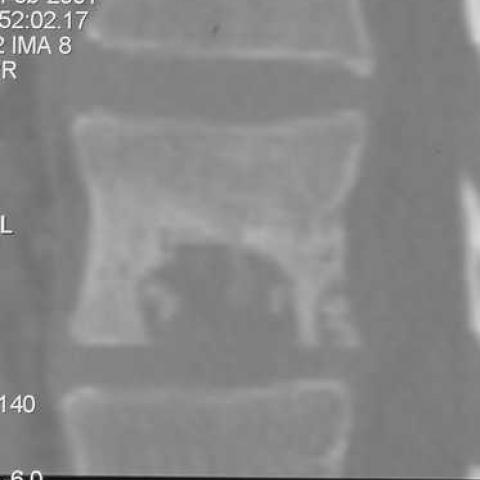 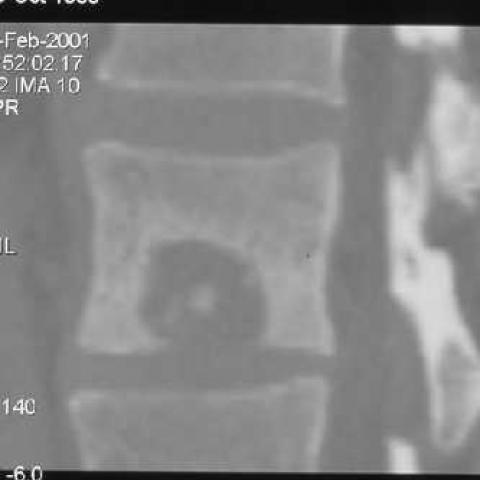 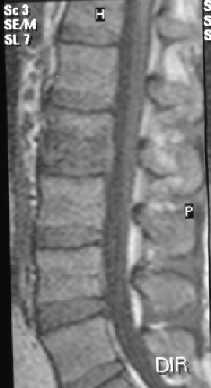 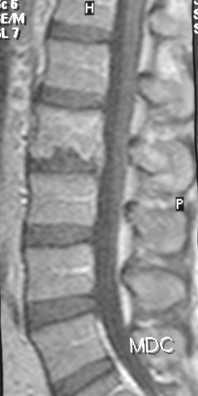 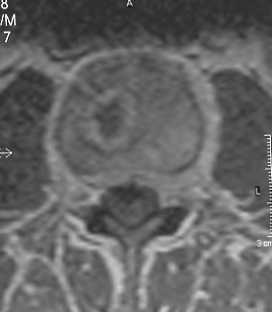 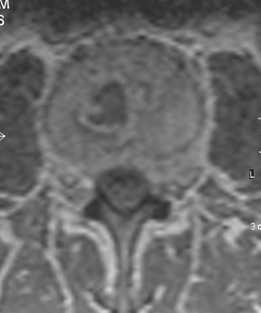 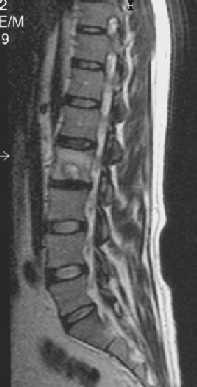 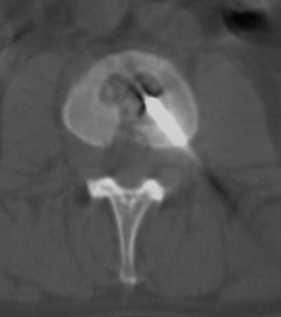 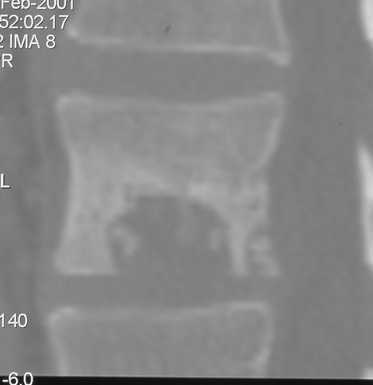 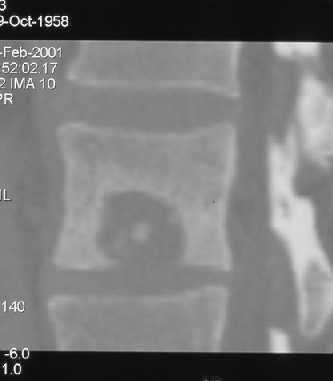