Categories
Area of Interest Abdomen ; Imaging Technique CT ;
Procedure Contrast agent-intravenous, Comparative studies ; Special Focus Haemangioma ;
Show more Show less
View full case Show related cases Notify admin
Clinical History
Patient with known left adrenal mass, detected by US and CT. She refused abdominal MR and surgical excision of the mass. Therefore, CEUS was performed and CT follow-up was suggested. Her clinical history included gastrectomy for malignancy more than ten years before.
Differential Diagnosis List
Log in to take the quiz and to see the final diagnosis
Adrenal haemangioma
Adrenal carcinoma
Adrenal metastasis
Phaeochromocytoma
Imaging Findings
Abdominal CT findings: Images were obtained 30 seconds, 70 seconds, and 3 minutes after contrast injection. An adrenal soft tissue attenuation mass of 6.5 cm with some calcifications was detected, after contrast administration the mass enhanced with gradual filling, and the central region did not significantly enhance (Fig. 1).
CEUS examination confirmed this pattern of enhancement. Moreover, in comparison with the CT performed four years before, the adrenal mass presented a slight increase in size, about 1 cm on short axis, and a slight increase of the amount of calcifications (Fig. 2); these data were considered to be the result of haemorrhage. On the basis of the dimensional stability, a presumptive diagnosis of benign lesion was made, and evaluating the contrast enhancement pattern, the diagnosis of adrenal haemangioma was proposed. Finally, as expected, CT and CEUS follow-up, over further two years, did not show important changes in size and structural findings.
Discussion
Adrenal cavernous haemangiomas are rare and non-functional tumours; less than 70 cases have been reported in English literature. Typically, adrenal hemangiomas are unilateral, discovered incidentally, and become apparent in the sixth-seventh decade of life, with a 2:1 female-to-male predilection.
At unenhanced CT, adrenal haemangiomas appear as a well-delineated hypoattenuating or heterogeneously attenuating mass. The presence of phleboliths or dystrophic calcifications within the lesion is characteristic of a haemangioma; in fact, it may be evident in approximately two-thirds of cases. Irregular or crescent calcifications may be the result of a previous haemorrhage, thrombosis or necrosis [1].
Adrenal calcifications may also reflect granulomatous infection, or can be present in adrenal masses, such as myelolipoma, adrenocortical carcinoma, pheochromocytoma and cyst [2].
After intravenous bolus administration of contrast material, CT shows multiple peripheral nodular areas of marked enhancement. However, a filling-in phenomenon, frequently described in cavernous haemangioma of the liver, may rarely occur in adrenal haemangioma because of the presence of necrosis, fibrosis, and thrombosis in the centre of the tumour [1]. The MR findings associated with haemangiomas include a hypointense appearance relative to the liver on T1-weighted sequences, central hyperintensity may be seen because of haemorrhage. On T2-weighted images, haemangiomas are hyperintense. Peripheral enhancement that persists on delayed images is characteristic [3]. In our case, the adrenal lesion measured 6.5 cm in its longest diameter and showed a peripheral patchy enhancement with a poor central vascularity, likely due to necrosis; this pattern of peripheral spotty contrast enhancement with centripetal enhancement was crucial for diagnosing adrenal haemangioma. Finally, it is important to notice that these tumours are usually removed because of the risk of haemorrhage and inability to exclude malignancy. In particular, resection is generally advocated for all functioning lesions, as well as those with features suggestive of malignancy, including lesions over 4 cm, density lesion without contrast >20 HU, heterogeneity, delayed washout on enhanced CT images, and substantial growth during observation [4].
References 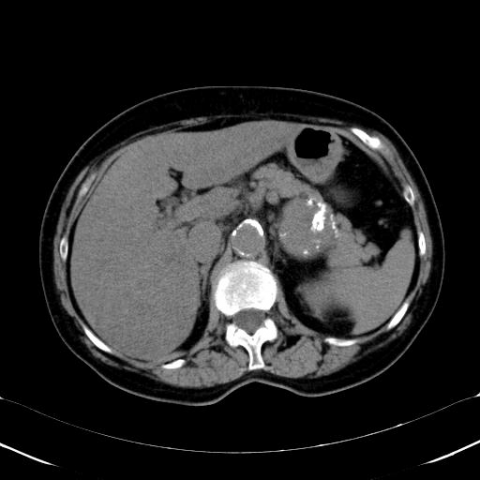 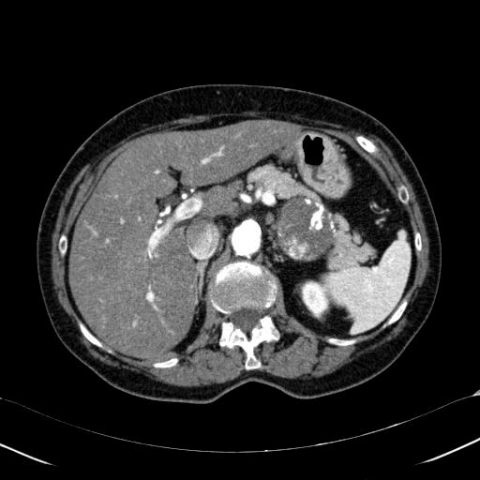 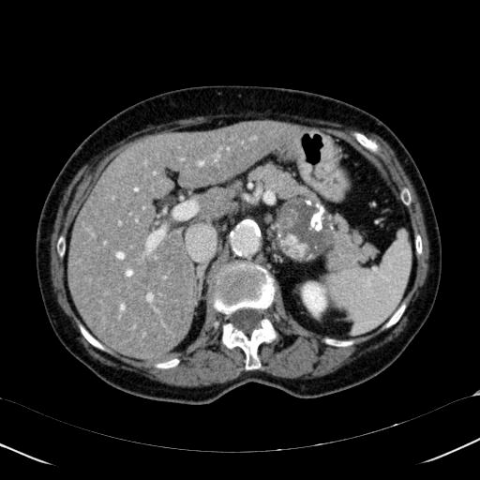 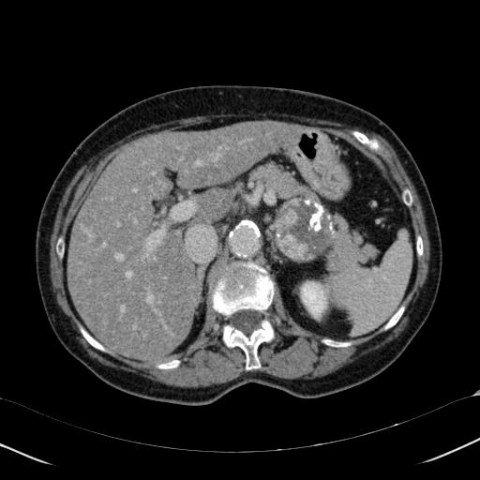 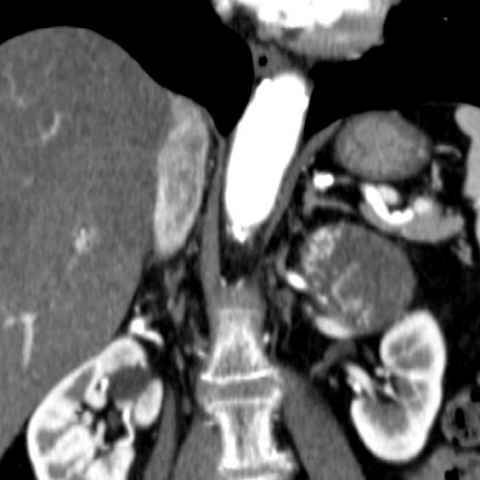 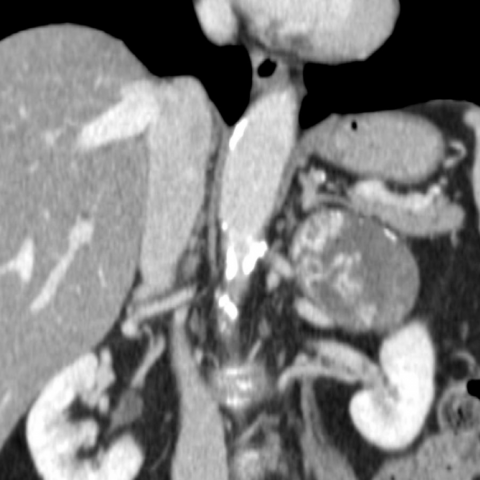 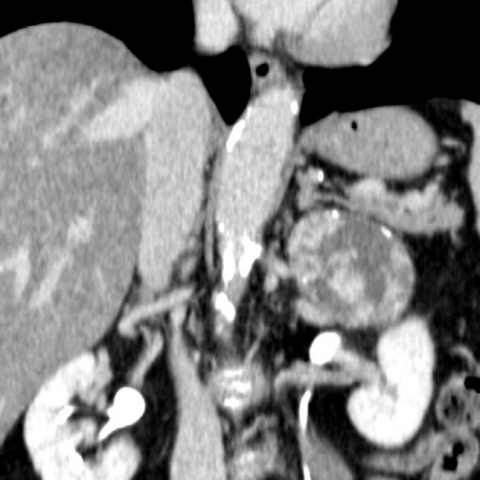 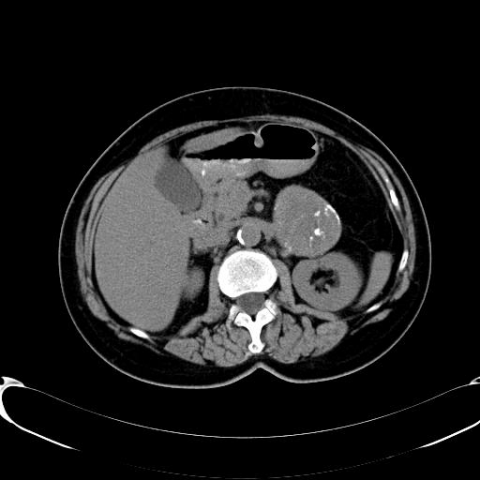 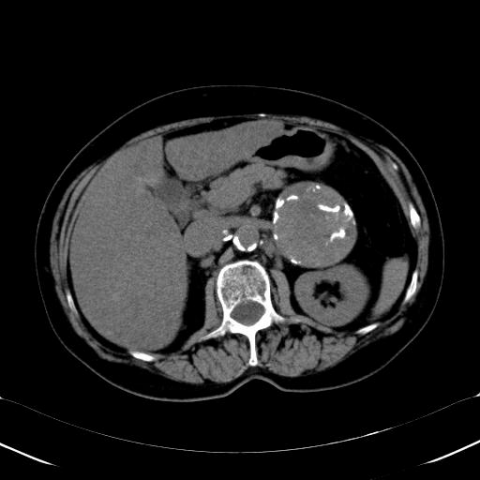 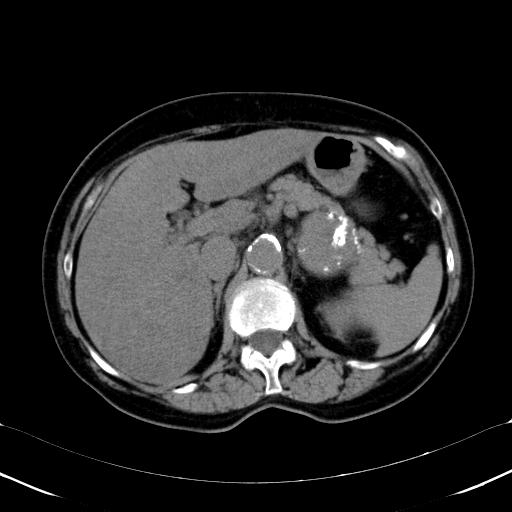 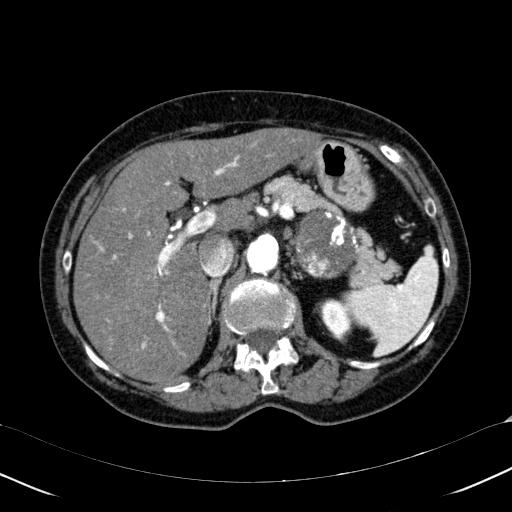 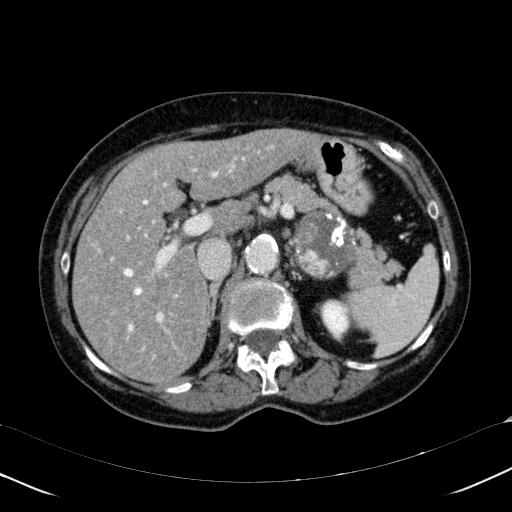 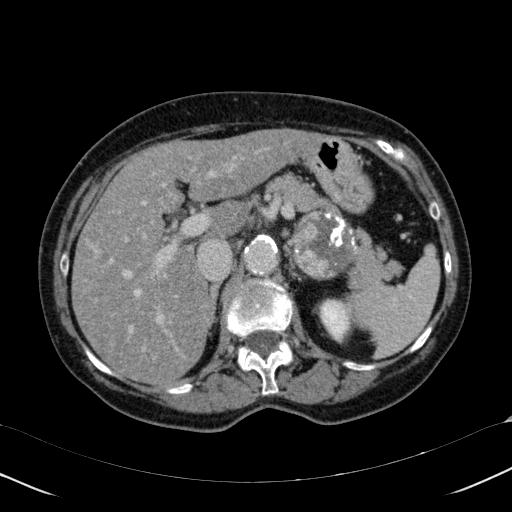 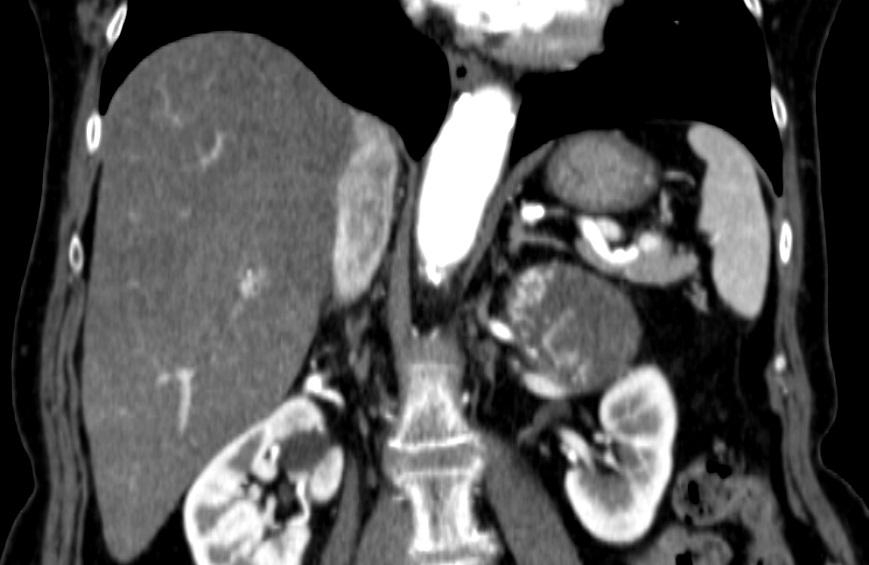 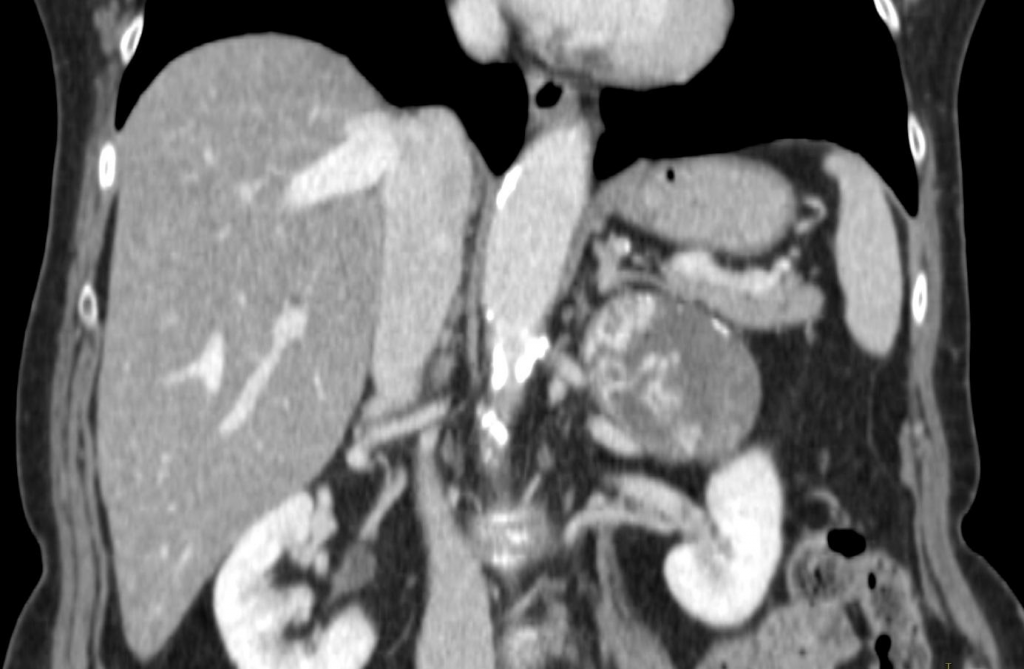 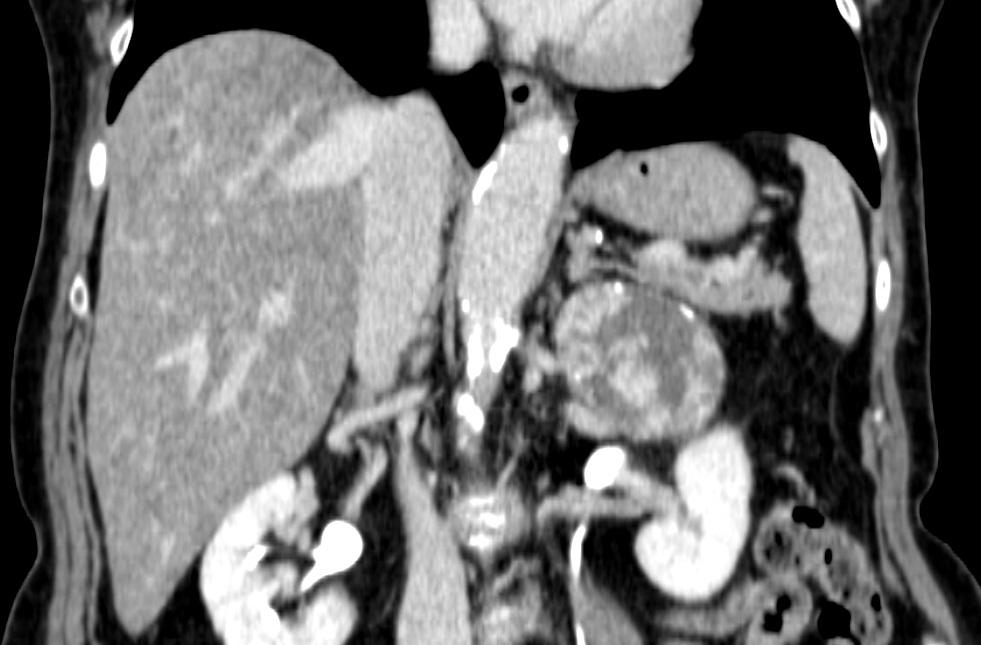 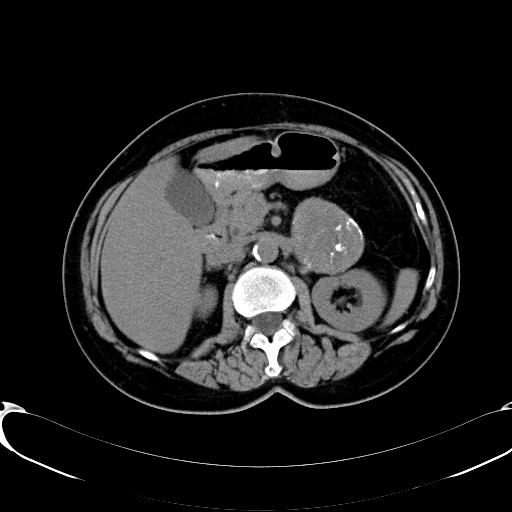 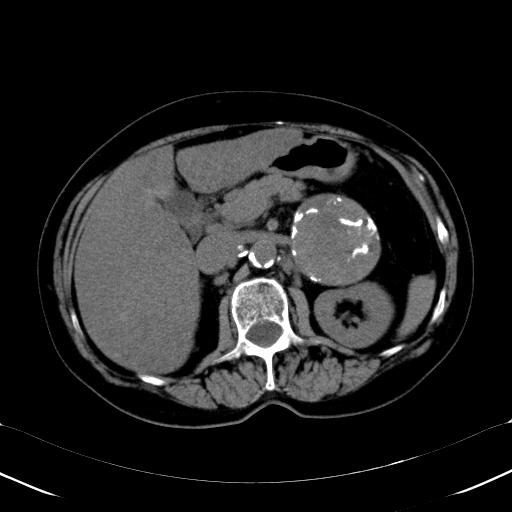