Emphysematous hepatitis in a diabetic patient

Categories
Area of Interest Liver, Portal system / Hepatic veins, Biliary Tract / Gallbladder, Arteries / Aorta ; Imaging Technique CT, Image manipulation / Reconstruction
Procedure Imaging sequences ; Special Focus Pathology, Embolism / Thrombosis, Obstruction / Occlusion ;
Show more Show less
Download as PDF Print Show related cases Notify admin
Clinical History
A 72-year-old, poorly controlled diabetic male patient presented to the emergency department with severe right upper quadrant pain and fever with chills. His white blood cell count was 30, 000/cc3. An emergent CT of the abdomen was performed. Despite aggressive antibiotic therapy, the patient expired a few hours later.
Imaging Findings
CT of the abdomen was performed without oral contrast, before and after the intravenous administration of iodinated, nonionic contrast agent, in the arterial and portal venous phase. Replacement of the liver parenchyma with gas involving segments V and VIII was observed (Fig. 1a, b, d), with no fluid collection in the involved areas or evidence of abscess formation (Fig. 2), or any signs of communication with the gallbladder (Fig. 3). The remainder of the liver parenchyma showed no other abnormalities. There seemed to be gas in small peripheral branches of the portal vein (Fig. 1c). No free intraperitoneal fluid was noted. The main portal vein and hepatic artery were patent (Fig. 4, 5). Our patient had no history of trauma or liver surgery. Primarily based on CT findings, diagnosis of emphysematous hepatitis was made and aggressive antibiotic therapy was initiated. Unfortunately, the patient died a few hours later.
Discussion
Hepatic gas detected on CT has many causes, both non-iatrogenic, e.g. liver abscess, mesenteric infarction and abdominal trauma, and iatrogenic, such as from therapeutic interventions like hepatic artery embolization and tumour ablation.
Emphysematous hepatitis is a fulminant infection characterized by replacement of the liver parenchyma by gas. The term was first described by Blachar et al in 2001. This condition is extremely rare unlike other emphysematous processes of the abdomen including emphysematous cholocystitis and pyelonephritis [1].
Gas-forming infections are particularly common in diabetics. The formation of gases like nitrogen and hydrogen is due to mixed acid fermentation of glucose by the bacteria. Common organisms associated with emphysematous infections include Escherichia coli, Klebsiella, Clostridium welchii and Staphylococcus aureus [2].
CT is the imaging method of choice for the detection of presence of gas in various organs. In emphysematous hepatitis there is replacement of the liver parenchyma with gas, with no evidence of fluid collections, abscess formation or mass effect [2]. The imaging findings resemble those of emphysematous pyelonephritis, particularly type I according to Wan et al, which refers to renal parenchymal destruction with mottled or streaky gas but with no associated fluid collection present [3].
Differential diagnosis includes primarily pyogenic abscess and gas formation in infracted liver parenchyma. CT appearance of abscess is characteristic and consists of a clustered or multiseptated, round or oval hypodense collection of pus, which may be encapsulated, with rim enhancement and mass effect. Air bubbles or an air-fluid level is observed in 19% of cases [4]. None of these characteristics were observed in our patient. Liver infarction is very rare due to the dual blood supply from hepatic artery and portal vein, as well as the presence of extensive collaterals. Both systems must be compromised, most often from embolus or thrombus in the clinical setting of liver transplantation or trauma, for an infarct to result. Gas formation has been described in sterile and infected infarcted tissue in the form of gas bubbles, but extensive parenchymal necrosis wit gas replacing solid parenchyma is not usually seen [2]. Infarct is best depicted on post-contrast images as a perfusion defect in a geographic or segmental pattern [5]. The clinical history and imaging characteristics were not associated with this condition in our patient.
Emphysematous hepatitis represents a rapidly progressive fatal infection that requires awareness among radiologists and clinicians for early diagnosis with CT imaging and aggressive management (antibiotics, surgical intervention) [2, 3].
Differential Diagnosis List
Emphysematous hepatitis
Pyogenic abscess
Hepatic infarction with gas formation (gas gangrene)
Hepatic abscess from complicated cholecystitis
Final Diagnosis
Emphysematous hepatitis
References 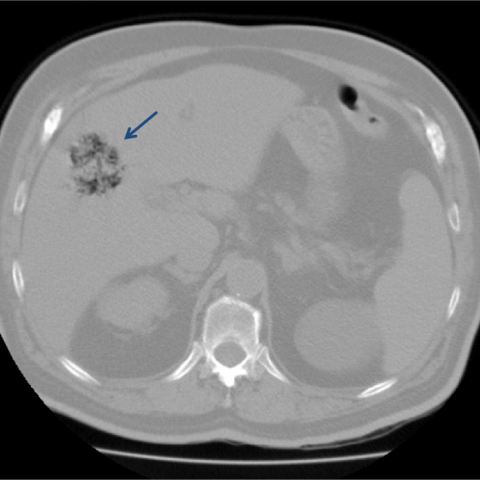 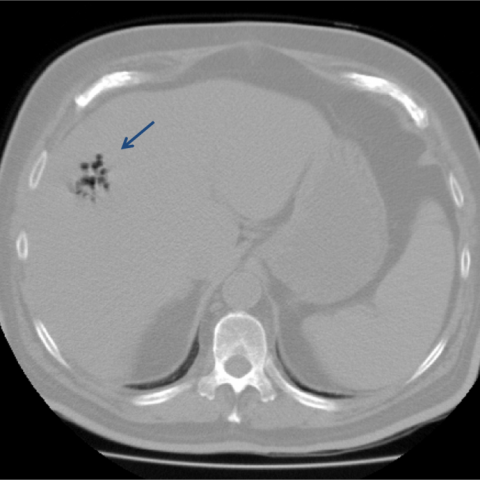 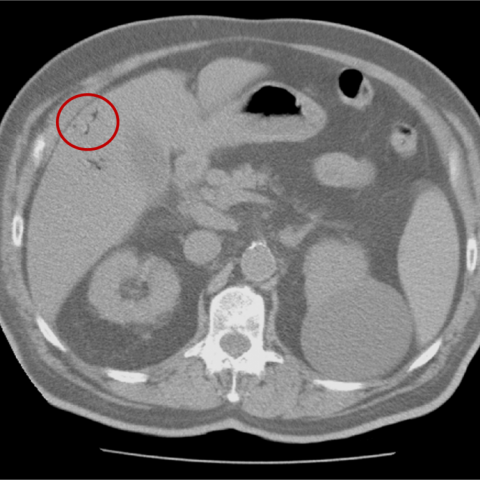 Presence of gas in small peripheral branches of portal vein 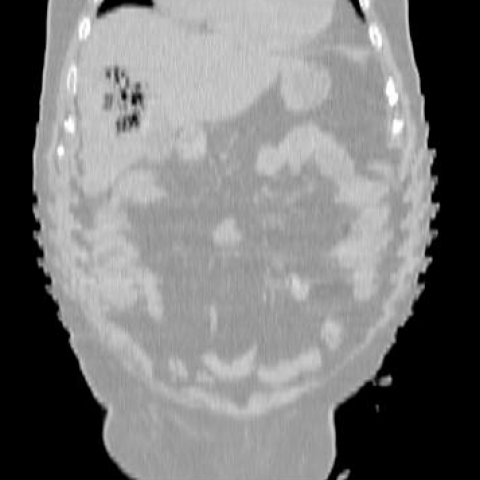 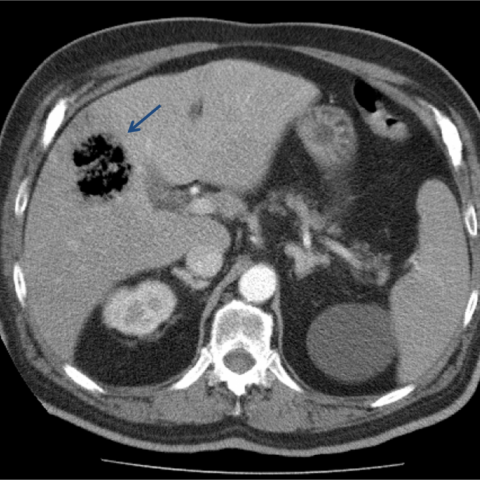 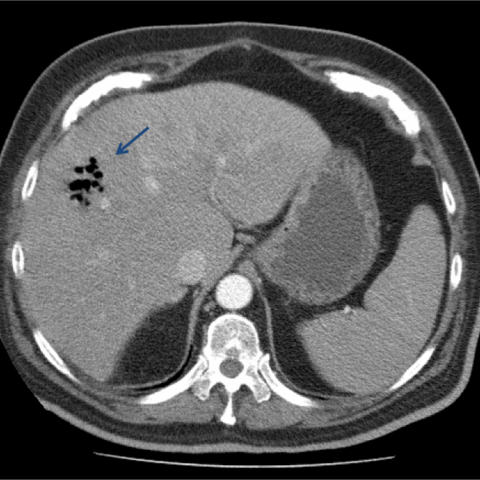 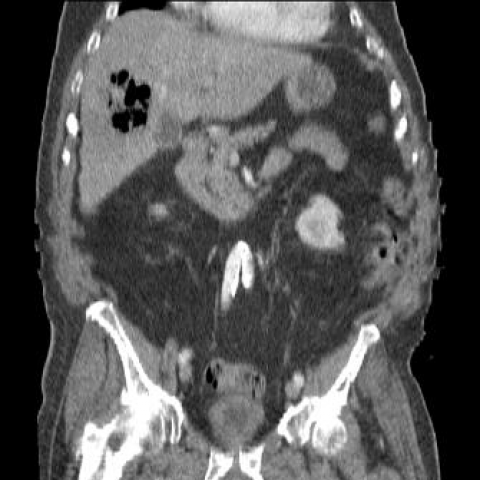 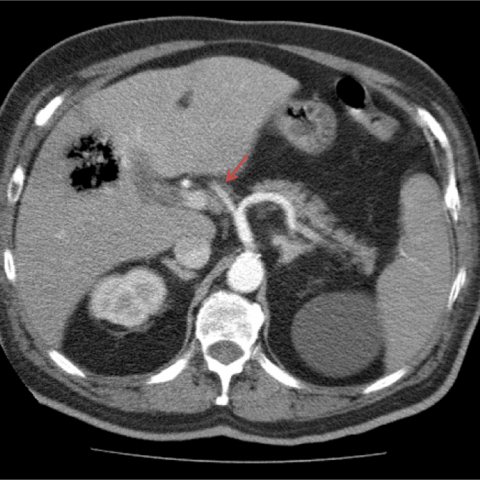 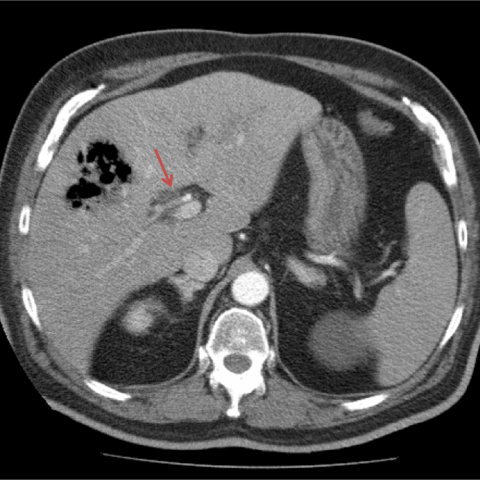 Patency of the hepatic artery in the porta hepatis
Figure 4 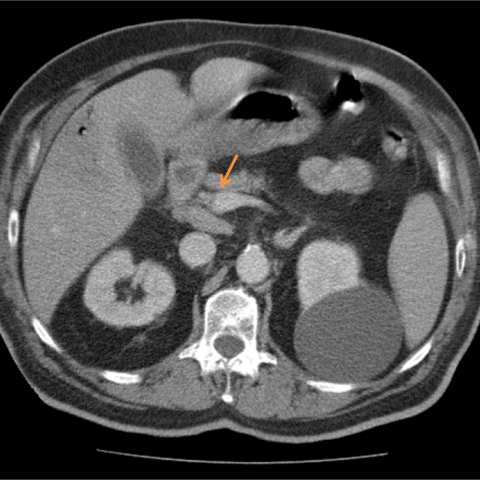 Patency of the portal vein at portosplenic confluence 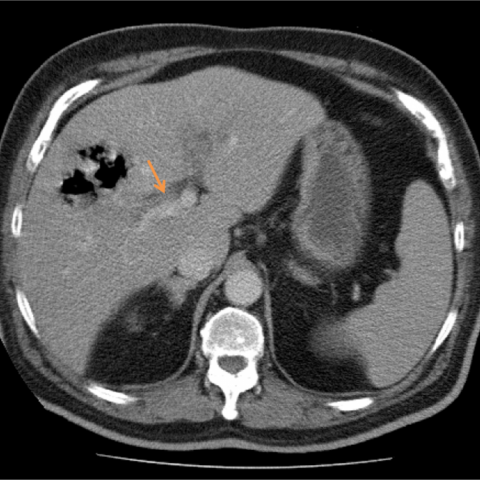 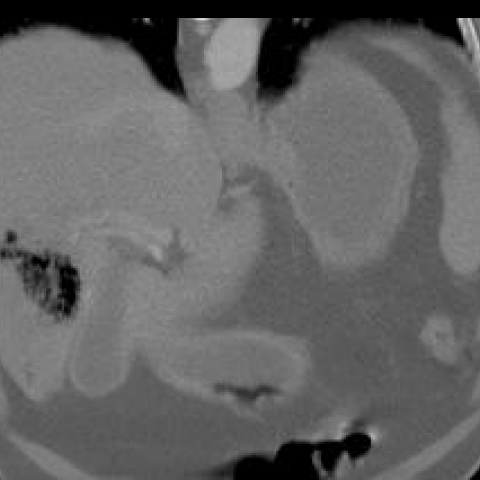 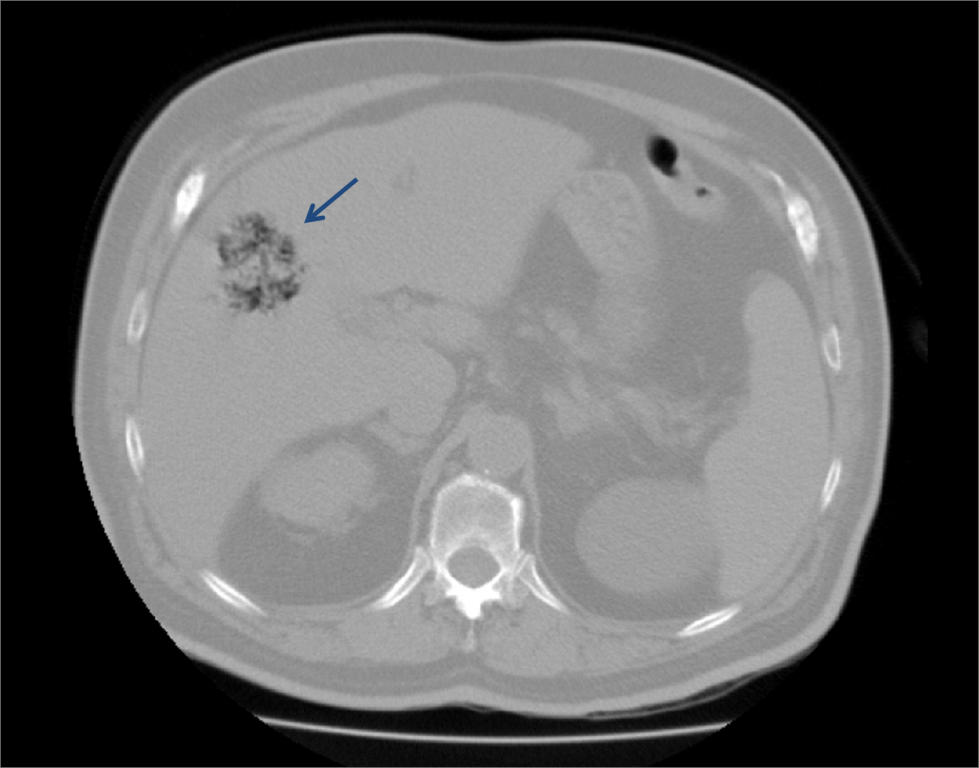 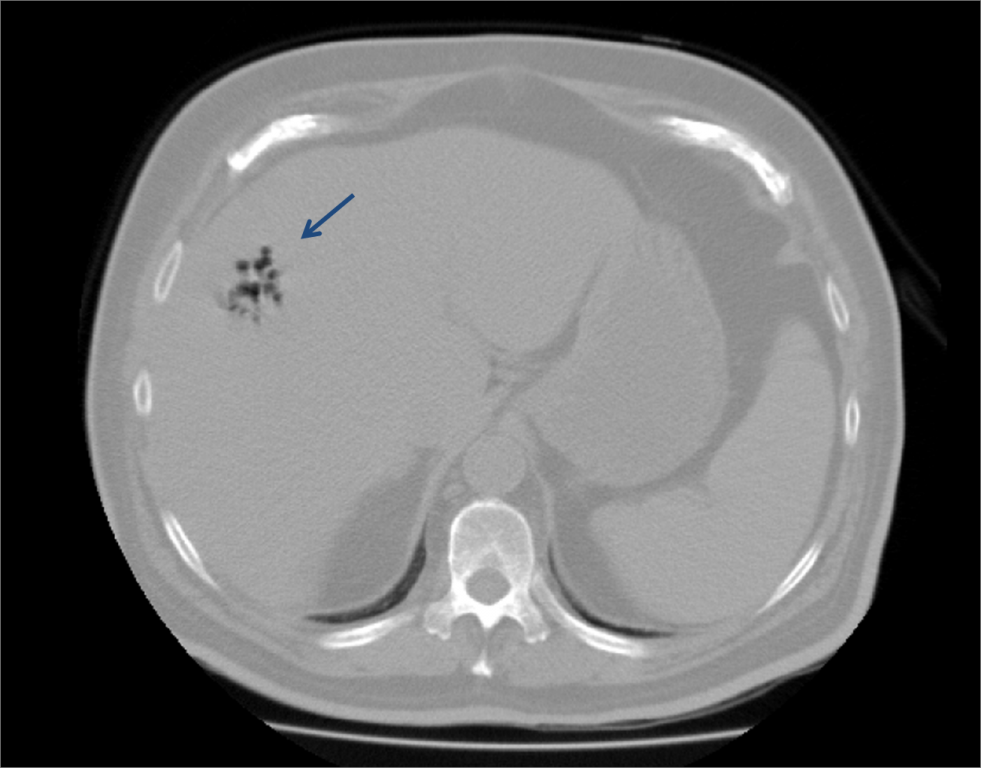 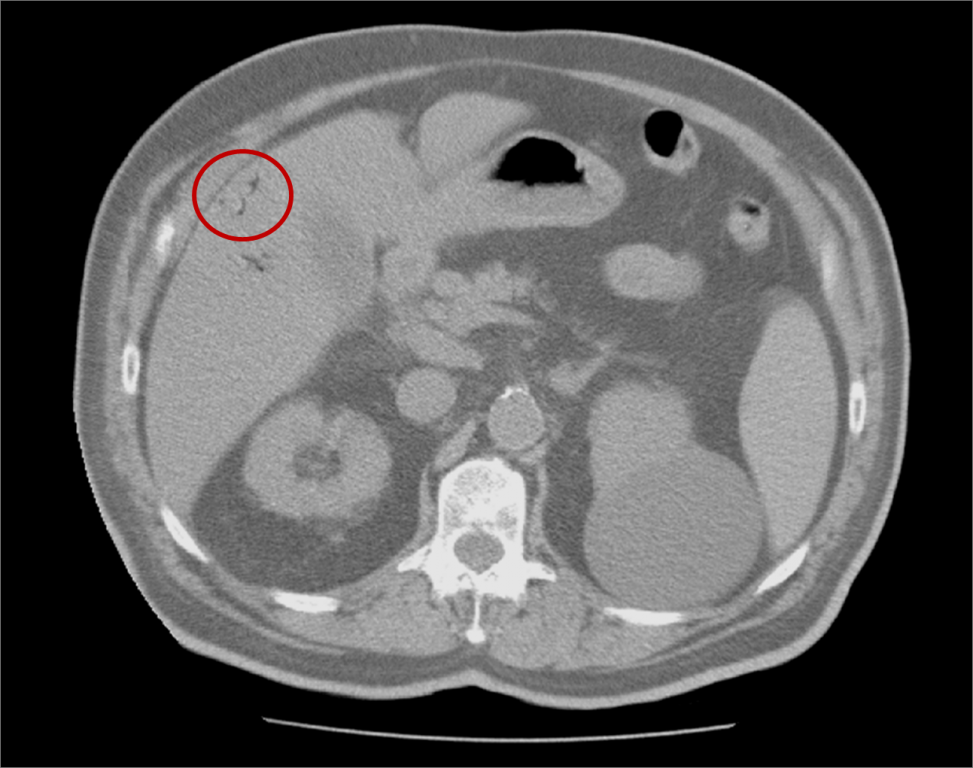 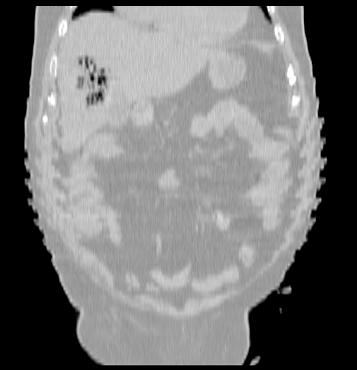 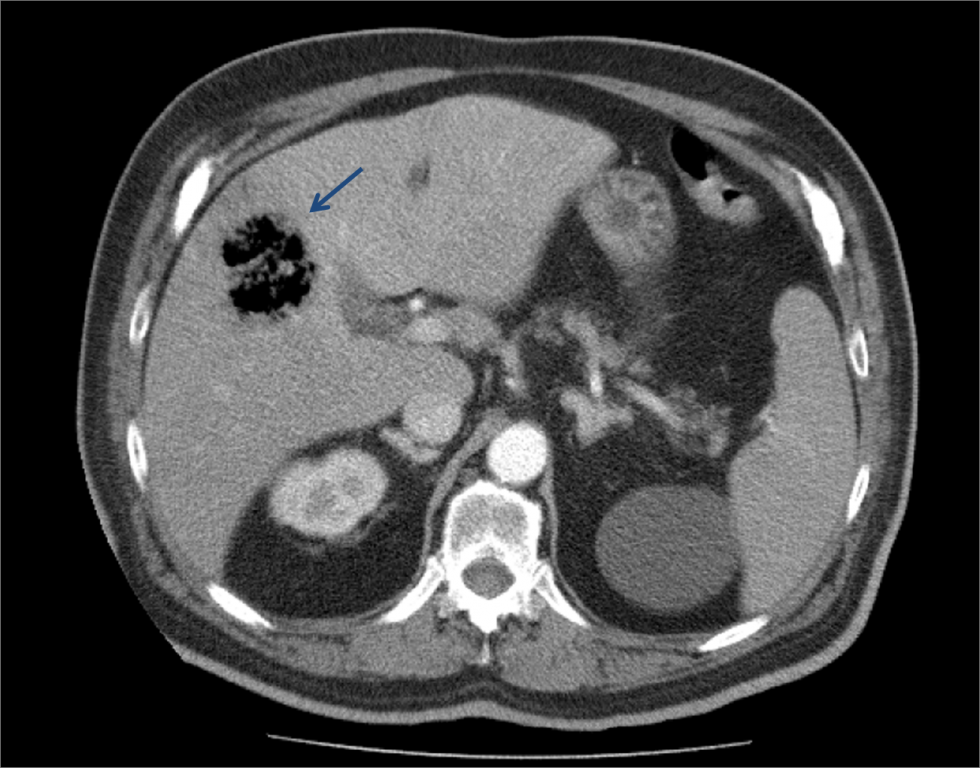 Absence of fluid collections or signs of abscess formation in the involved segments (segment V)
Department of Radiology, General Hospital of Thessaloniki G.Gennimatas 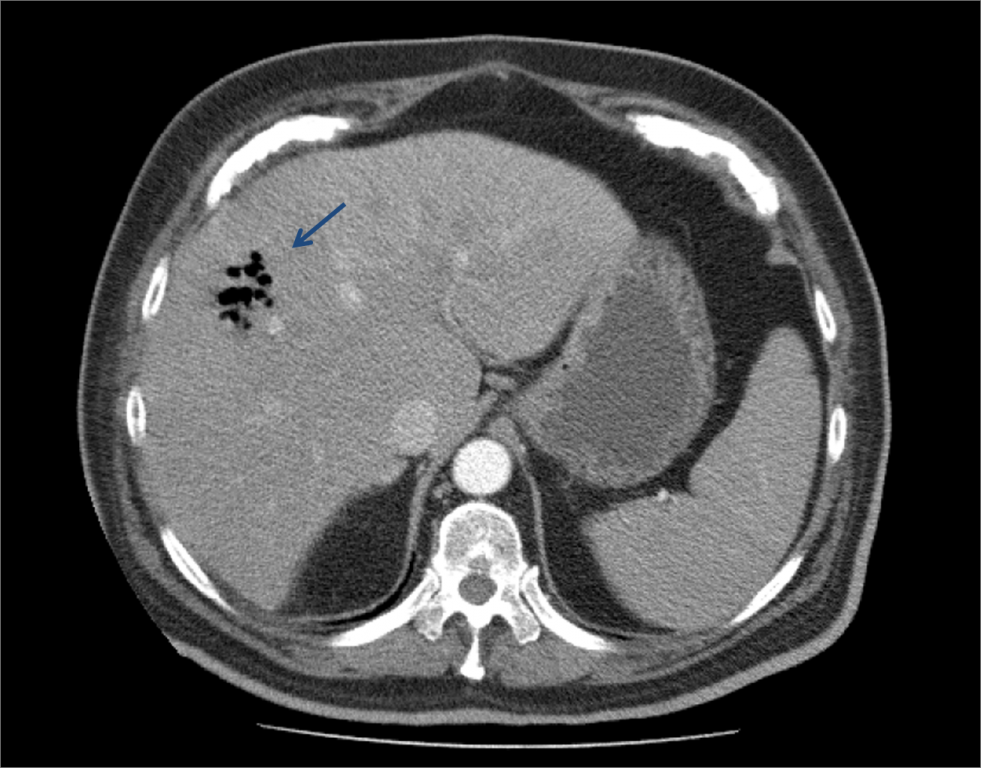 Absence of fluid collections or signs of abscess formation in the involved segments (segment VIII)
Department of Radiology, General Hospital of Thessaloniki G.Gennimatas 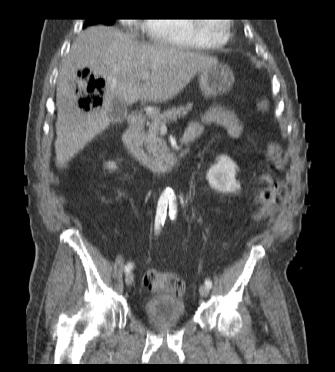 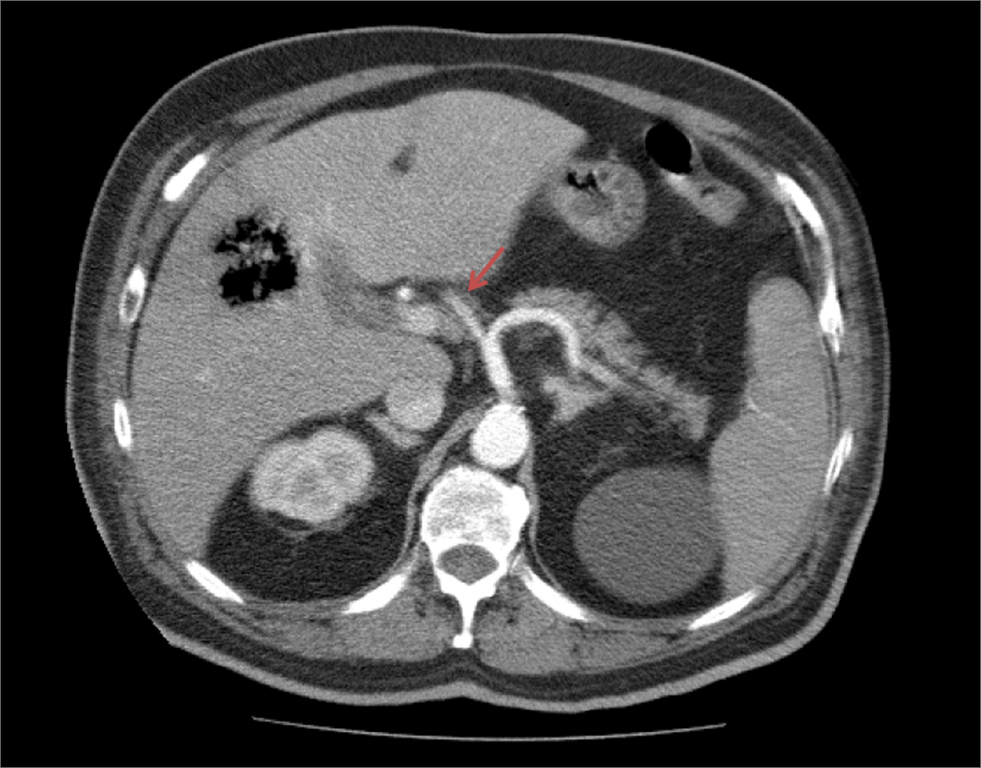 Patency of the main hepatic artery at its origin from the coeliac axis
Department of Radiology, General Hospital of Thessaloniki G.Gennimatas 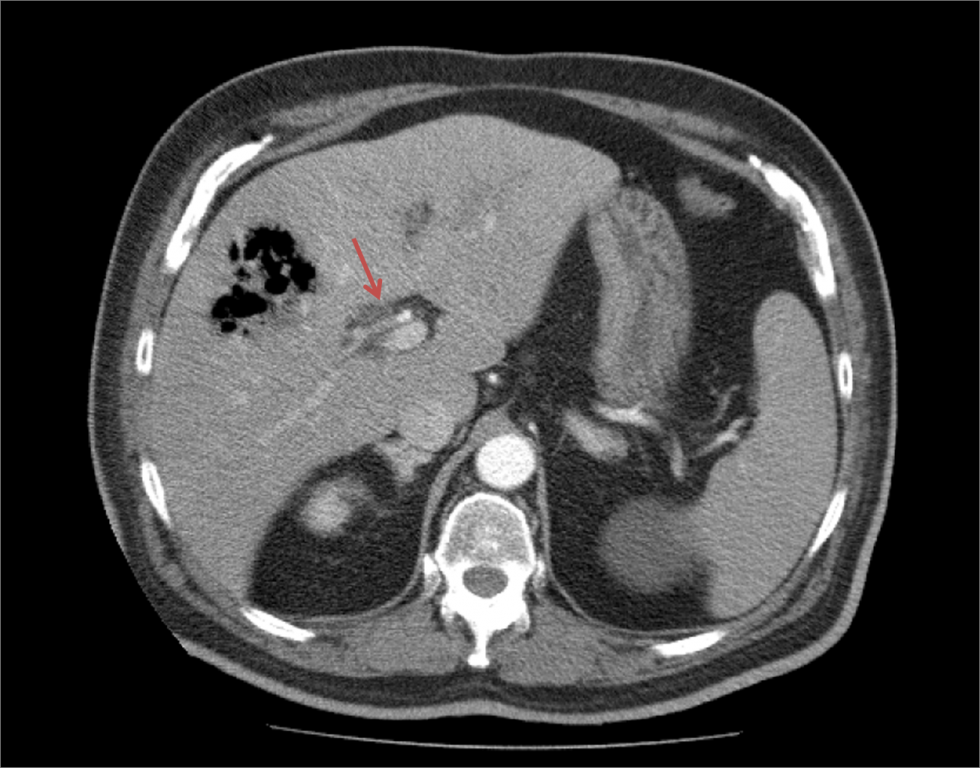 Patency of the hepatic artery in the porta hepatis
Department of Radiology, General Hospital of Thessaloniki G.Gennimatas 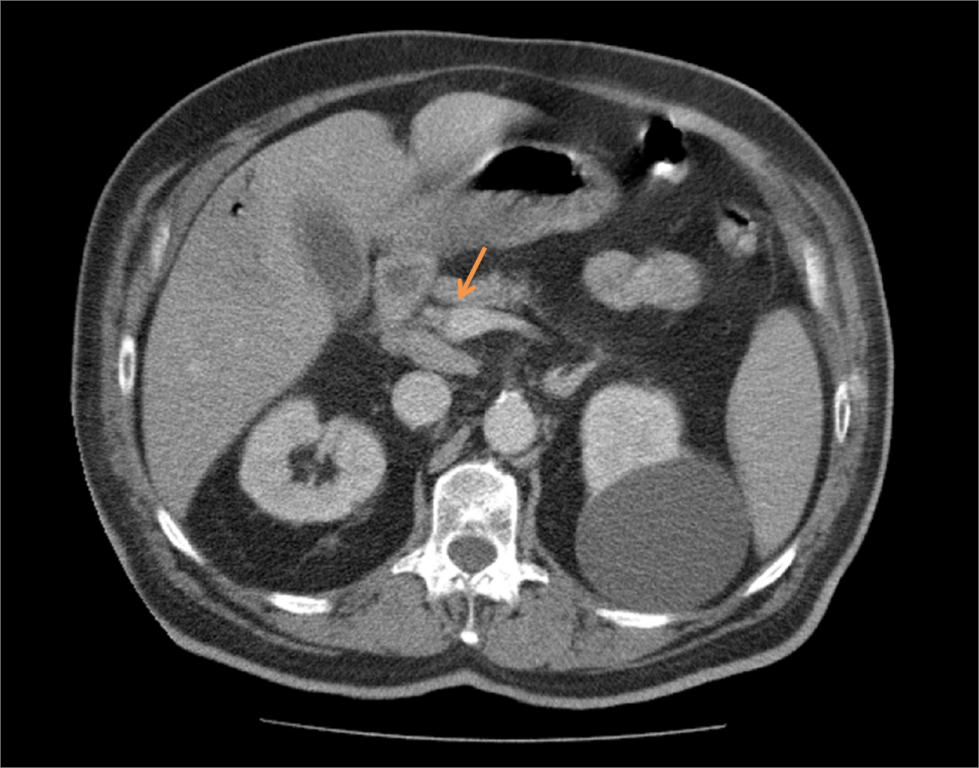 Patency of the portal vein at portosplenic confluence
Department of Radiology, General Hospital of Thessaloniki G.Gennimatas 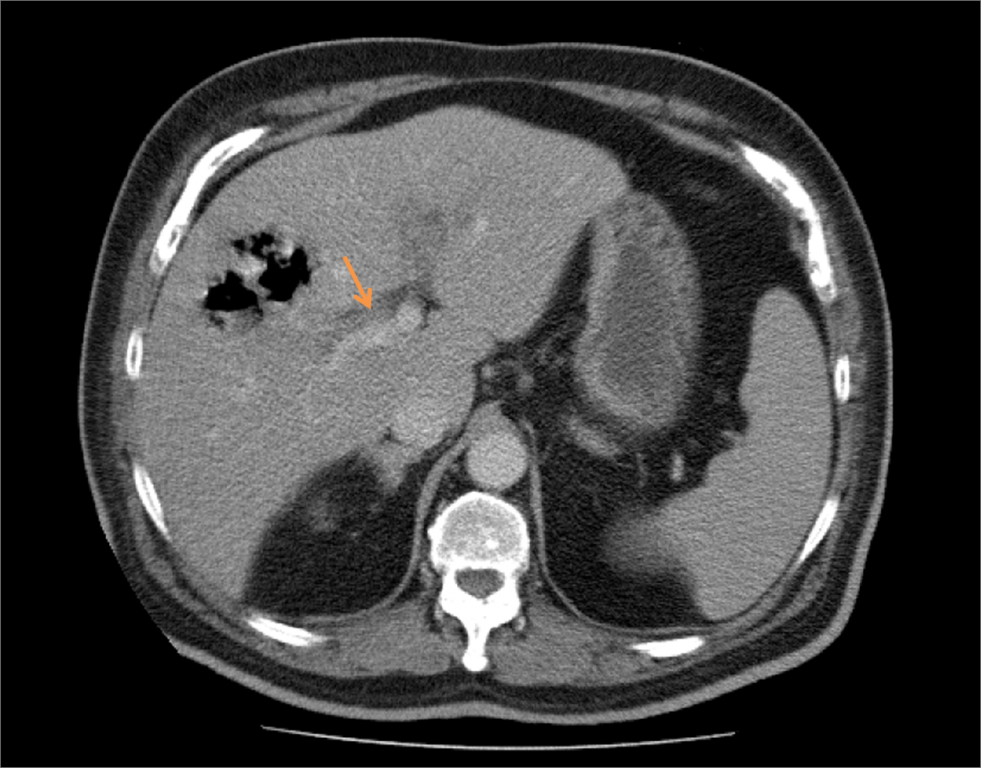 Patency of portal vein at its bifurcation into right and left branches
Department of Radiology, General Hospital of Thessaloniki G.Gennimatas 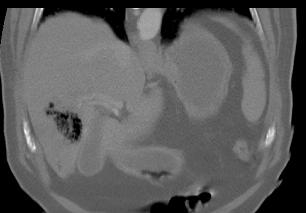