Categories
Area of Interest Breast ; Imaging Technique Mammography, Ultrasound, Percutaneous
Procedure Education, Biopsy ; Special Focus Pathology ;
Show more Show less
Download as PDF Print Show related cases Notify admin
Clinical History
A 44-year-old Caucasian man with a history of long-standing insulin-dependent diabetes mellitus type I came to our department complaining of a palpable lump in his right breast. When asked about familiar pathologic history he referred that his mother and a maternal aunt had premenopausal breast cancer.
Imaging Findings
Mammography shows a moderate density nodule with ill-defined contours in the upper outer quadrant of the right breast (Fig. 1, 2), that sonographically (US) reveals to be a hypoechoic nodule with indistinct margins, measuring 3 cm (Fig. 3). Since it was considered suspicious, moreover in a high-risk patient, we decided to perform a US-guided core-needle biopsy. Histologically, breast parenchyma was recognized with epithelial ductal hyperplasia, fibrous stroma and a moderate periductal inflammatory lymphocytic infiltrate (Fig. 4). However, since the lesion raised concern for malignancy the patient underwent another biopsy, almost excisional. Pathologic result only revealed adipose tissue with rare ducts, without atypia. One year later the patient, asymptomatic, came to our department for a routine evaluation. Mammography revealed asymmetric rudimentary breast tissue, without nodular lesions (Fig. 5), as in the US. Taking into account the results of both biopsies and patient evolution the conclusion was diabetic mastopathy.
Discussion
Diabetic mastopathy is a rare fibroinflammatory breast disease in men [1]. It is typically seen in young women, with long-standing type 1 diabetes (about 20 years after the onset of the disease) [1-3]. The hyperglycaemic state is thought to cause an increase in production and decrease in degradation of collagen, resulting in focal extracellular matrix expansion [4]. The most common clinical manifestation of diabetic fibrous mastopathy is a firm to hard, non-tender, mobile palpable breast mass [2]. Multicentric or bilateral involvement is a relatively frequent phenomenon, often occurring in late stages of the disease [5]. At mammography, generalized dense tissue is often present [1-5]. The mass may appear as an asymmetry or irregular lesion, or it may be obscured by dense tissue [1, 2, 4, 5]. At US, it may appear as single or multiple masses that are hypoechoic [4, 5] to subcutaneous fat and hypovascular or avascular [1]. Posterior acoustic shadowing may be present [1, 2, 4, 5]. Diabetic mastopathy may simulate breast cancer and often requires core biopsy to prove the diagnosis [1, 4, 5]. Histologically, it is characterized by stromal sclerosis with dense lymphocytic infiltration [1-3]. Once the diagnosis is established with biopsy, surgical excision is typically not indicated, since it may exacerbate the disease [1], and also because there is no associated increased risk of malignancy [1, 2]. Diabetic mastopathy can be self-limited; however, recurrent masses are not uncommon [4, 5]. This case aims to highlight that although gynaecomastia is the most common condition involving the male breast, a variety of other benign and malignant disease entities have been reported in the literature and familiarity with the salient features of these conditions will allow accurate imaging interpretation and avoid unnecessary and often invasive treatments.
Differential Diagnosis List
Diabetic mastopathy
Breast cancer
Breast lymphoma
Breast metastases
Final Diagnosis
Diabetic mastopathy
References 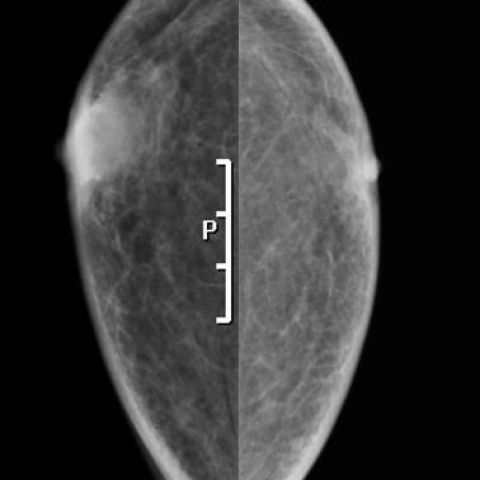 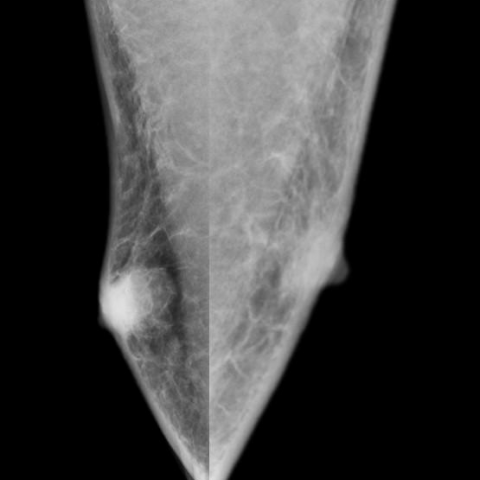 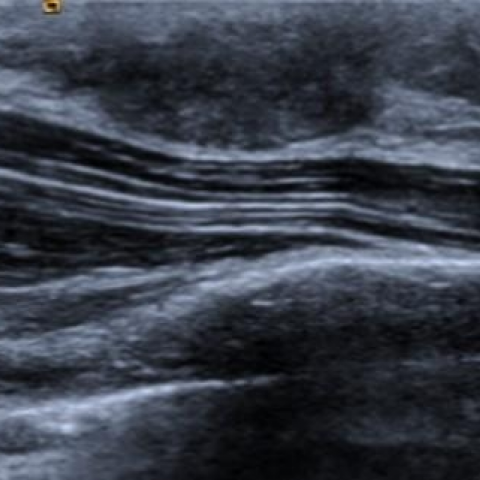 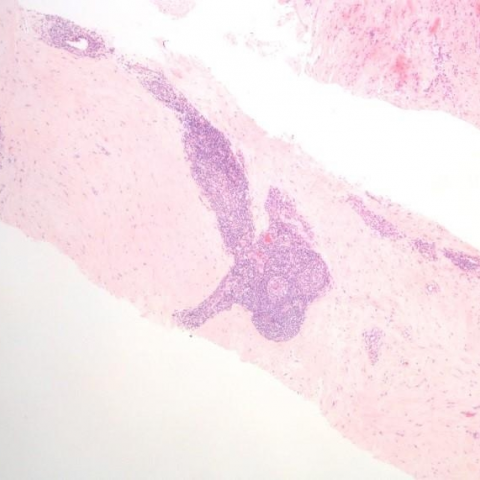 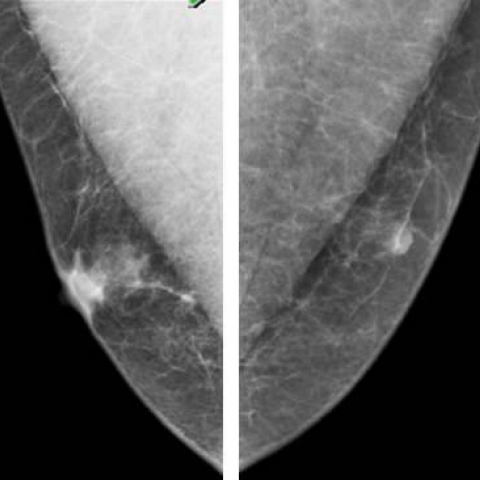 Mediolateral oblique view of both breasts, one year later, only shows asymmetric rudimentary breast tissue predominantly on the right side without nodular lesions. 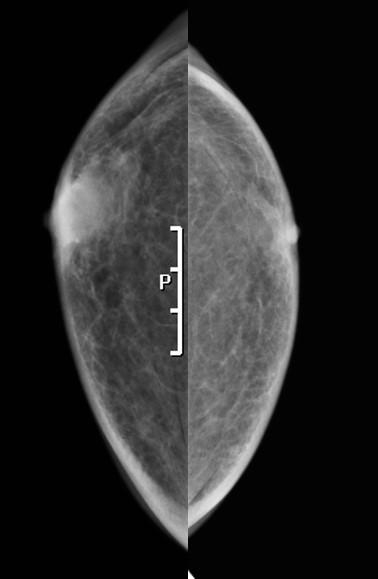 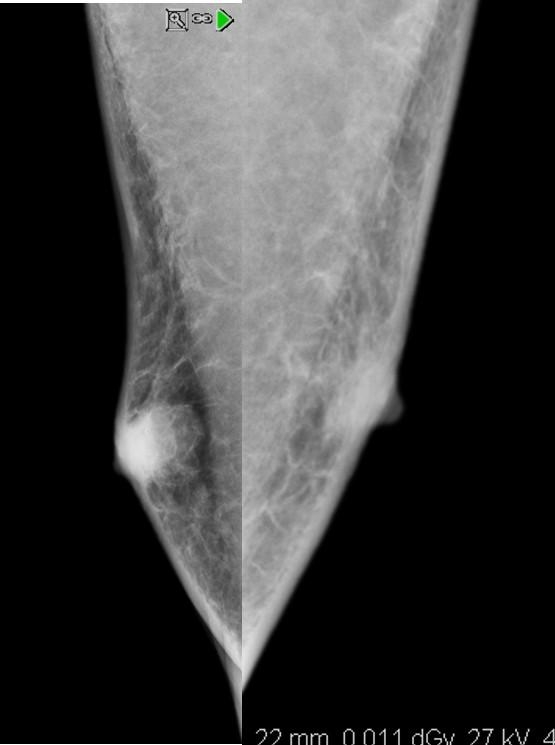 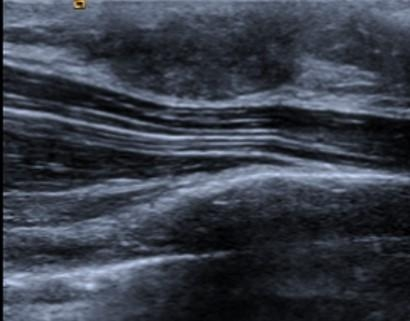 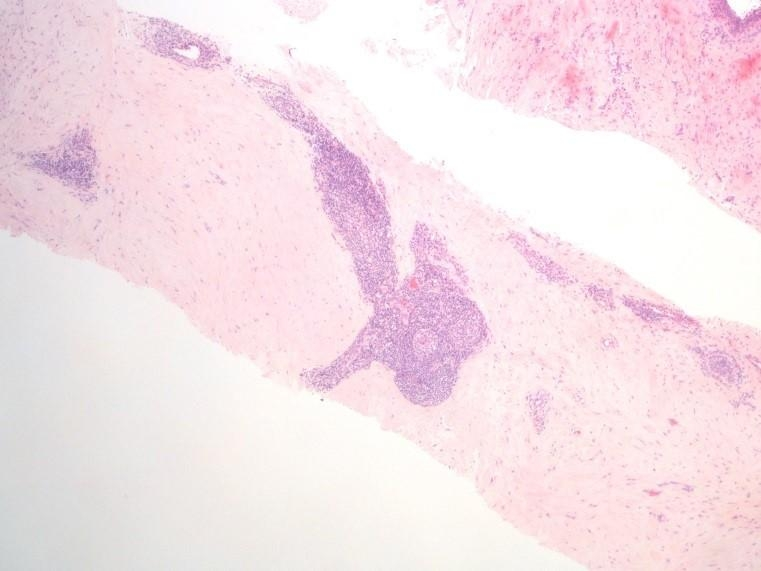 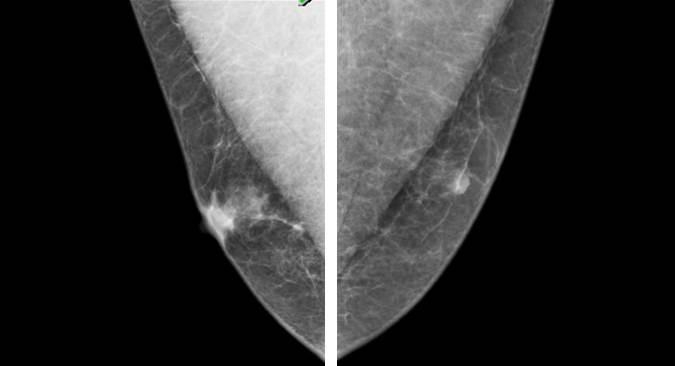