Categories
Area of Interest Musculoskeletal soft tissue, Molecular imaging ; Imaging Technique Ultrasound, Conventional radiography, CT
Procedure Education, Efficacy studies, Computer Applications-Detection, diagnosis, eLearning ; Special Focus Trauma ;
Show more Show less
Download as PDF Print Show related cases Notify admin
Clinical History
A 28-year-old female was referred with a 8 week history of pain in the right para lumbar region. Self medication had alleviated partially the symptoms. On physical examination, a hard mass was noted. No warmth or erythema was present. The patient was afebrile and had no blunt or penetrating trauma.
Imaging Findings
Because of the mass palpable, the first imaging study was a echography that showed a well circumscribed hypoechoic mass with a peripheral hyperechoic rim-like suggestive of calcification (Figure 1). Radiography and CT were performed because of the possible peripheral calcification and radiography of the lumbar spine demonstrated a lesion partially mineralized in the periphery (Figure 2) and CT confirmed a complete rim of calcification surrounding a central non calcified region (Figure 3). These imaging findings were suspicion of myositis ossificans and MRI was rejected because has limited its role in the calcifications. Through the possible diagnosis of myositis ossificans circumscripta (MOC), the patient underwent an excisional biopsy that confirmed the imaging diagnosis of MOC in a patient without trauma history. The lesion showed the typical zonal pattern (Figure 4), with gradual evolution from plump spindle cells trough immature woven bone to mature lamellar bone) in the periphery
Discussion
Myositis ossificans circumscripta (MOC) is a localized, non-neoplastic, heterotopic ossification within the muscle, and predominantly in the extremities. Although MOC is a benign process, it may be mistaken for malignant tumor or infection. The association with trauma result controversial but history of previous local trauma may be helpful in establishing the diagnosis. Because of its self-limiting nature, the therapy is usually conservative, and the surgery is necessary in order to established the diagnosis or alive the symptoms. The clinical symptoms of MOC such as pain and soft-tissue mass are not specific. The imaging features may suggest the existence of myositis ossificans, but this entity has many faces in function of the stages of MOC itself. The features evolve with successive maturation and formation of the characteristic zonal pattern, described by Ackerman [1] and Johnson [2] in the intermediate stage and with a heavily calcified lesion in the late stage. The typical zoning phenomenon is a well-defined complete rim of peripheral calcification with varying thickness surrounding a central noncalcified region. Computed tomography (CT) is the imaging modality of choice because it demonstrates this pattern with excellent definition of calcification better than radiography, ultrasound and MRI [3]. The distribution of calcification is helpful for the differential diagnosis of MO from musculoskeletal neoplasms, and the most important is the osteosarcoma, with its parosteal and soft tissue variants. The pattern of calcification in osteosarcoma is central while in MO there is central radiolucent area and the most calcification is at the periphery reminiscent of an eggshell. Synovial sarcoma and malignant fibrous histiocytoma also show calcifications, but these are involving only a portion of the tumor, often centrally located.
On microscopic examination, the tumor showed the zonal pattern with three zones. The central area consisted of highly undifferentiated cellular proliferation with hemorrhage and necrotic muscles, the middle zone showed osteoblasts and inmature osteoid deposits and the periphery was composed of mature bone [4]. Therefore, if the biopsy is performed it should include the peripheral zone because a sampling of the middle and central area may lead to a wrong diagnosis of sarcomatous tumor. Also a premature biopsy in acute phase without the zone phenomenon may lead to a wrong diagnosis of sarcoma.
Therefore, the sensitivity of the diagnosis technique is determined by the stage of MOC evolution. The CT is the best and earliest and can confirm the diagnosis while the MRI may be more confusing than diagnostic.
Differential Diagnosis List
Myositis ossificans circumscripta
Myositis osssificans circumscripta
Malignant fibrous histiocytoma
Synovial sarcoma
Final Diagnosis
Myositis ossificans circumscripta
References 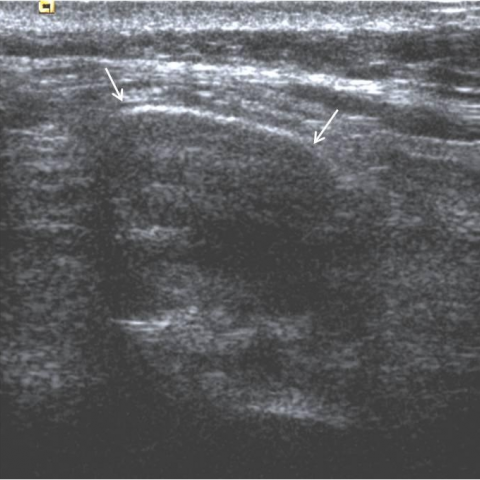 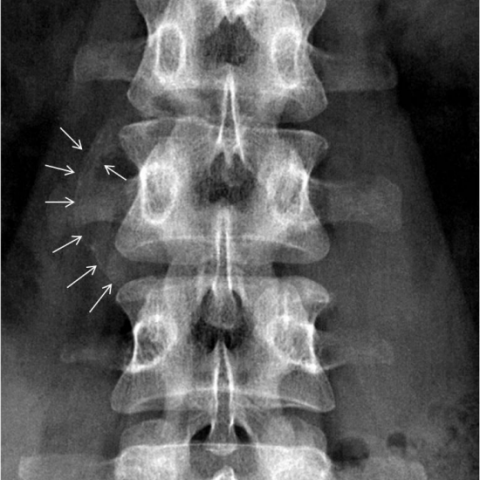 Anteroposterior X-ray showing that the lesion is located in right paralumbar region. The lesion is characterized by a sharply demarcated and parcial mineralization in the periphery(arrows)
Figure 3 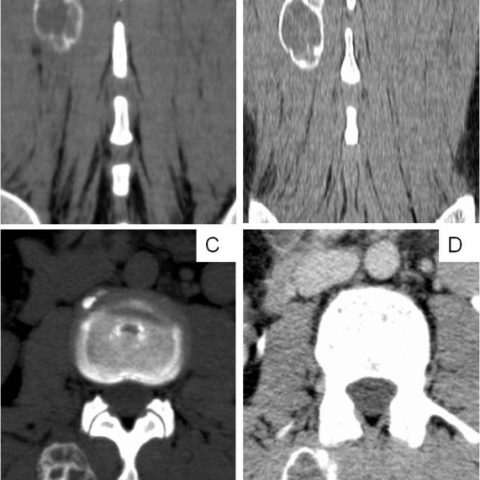 Lumbar spine CT. A and B: Coronal reconstruction with bone and soft tissue windows; C and D: Axial reconstruction. These images show an ossification in the periphery and lucent area in the center.
Figure 4 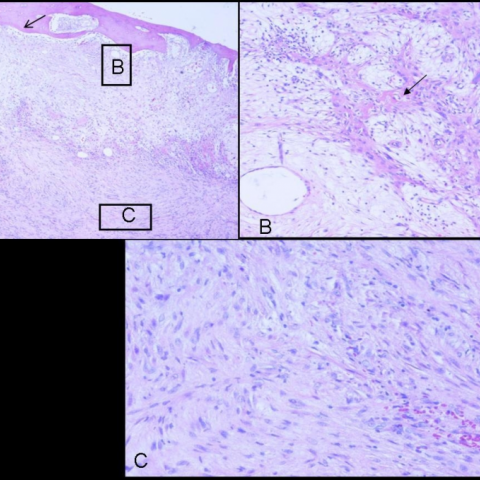 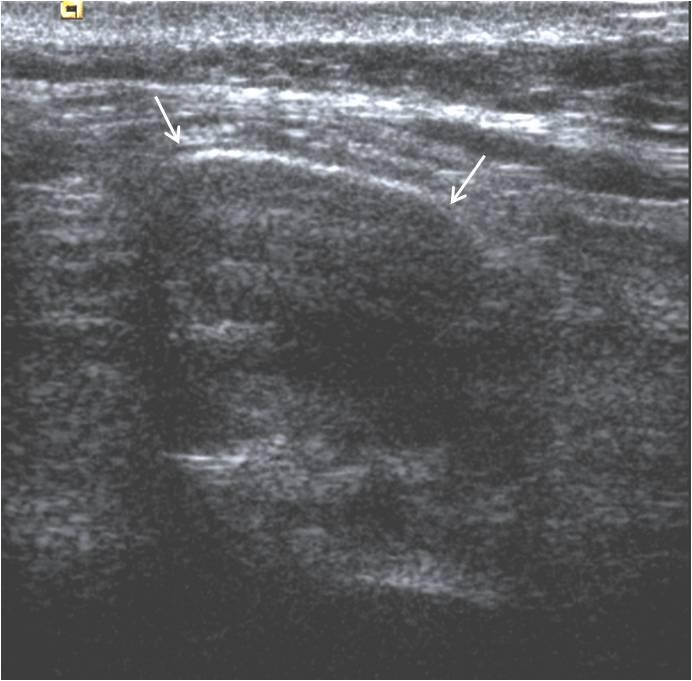 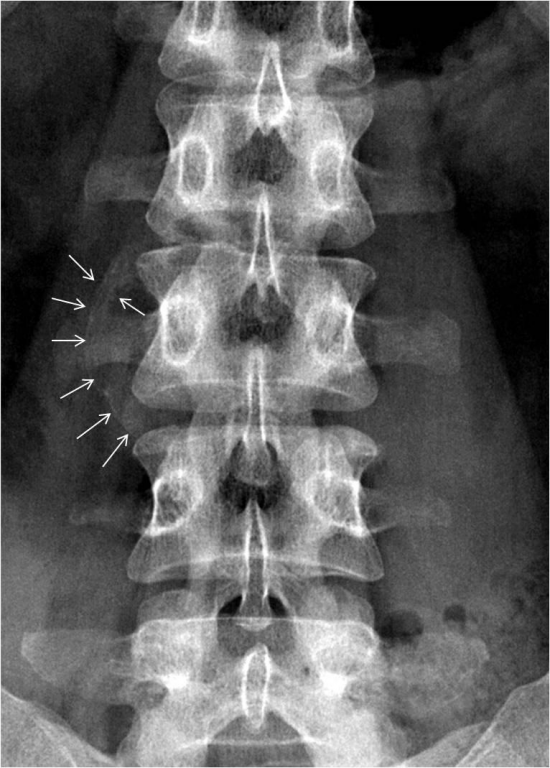 Anteroposterior X-ray showing that the lesion is located in right paralumbar region. The lesion is characterized by a sharply demarcated and parcial mineralization in the periphery(arrows)
Department of Radiology, Hospital Gregorio Marañon 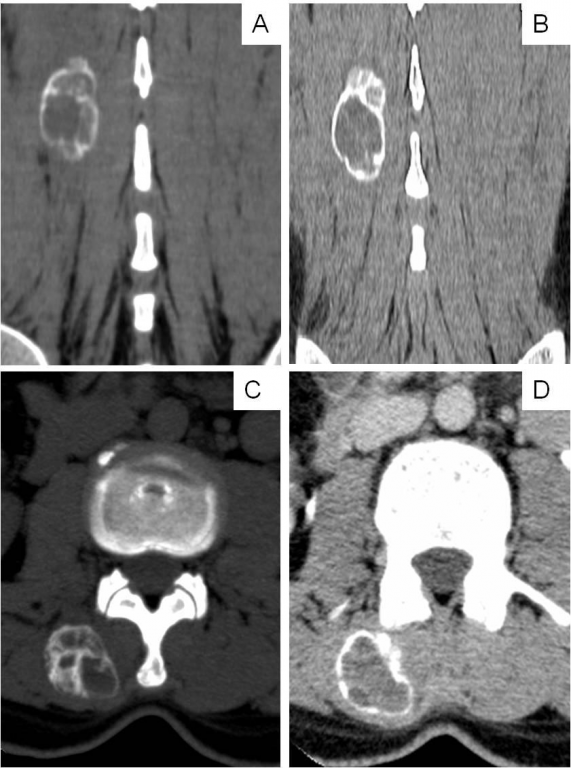 Lumbar spine CT. A and B: Coronal reconstruction with bone and soft tissue windows; C and D: Axial reconstruction. These images show an ossification in the periphery and lucent area in the center.
Department of Radiology, Hospital Universitario Gregorio Marañón; madrid , Spain 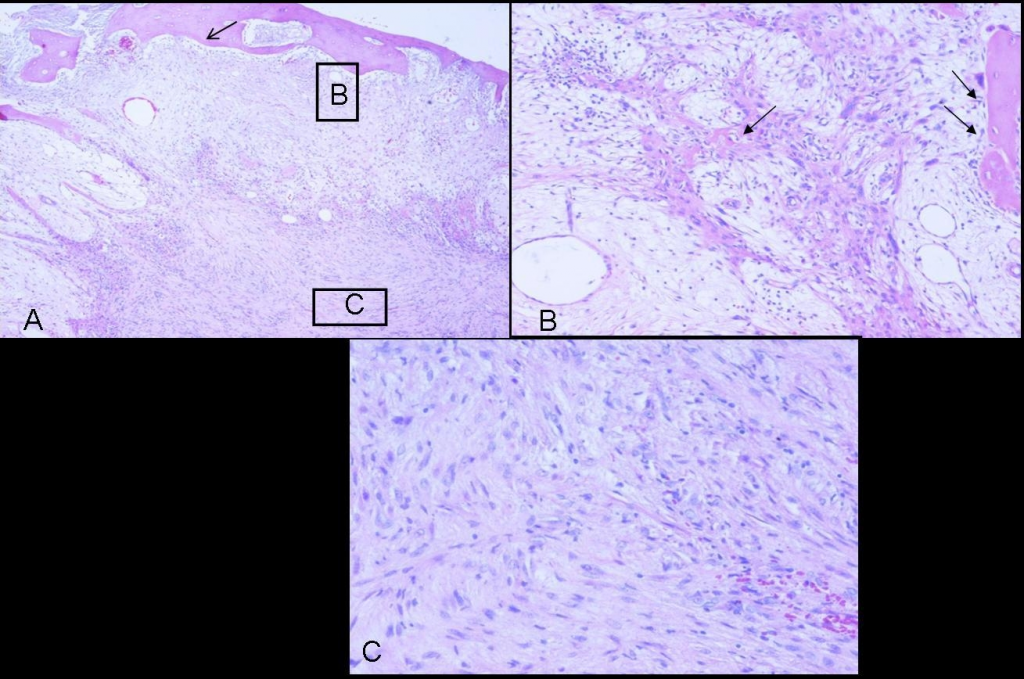