Categories
Area of Interest Abdomen, Biliary Tract / Gallbladder ; Imaging Technique CT, MR
Procedure Diagnostic procedure, Cholangiography ; Special Focus Cysts ;
Show more Show less
Download as PDF Print Show related cases Notify admin
Clinical History
63-year-old woman submitted to laparoscopic cholecystectomy 7 years before with complaints of upper right quadrant pain after meals with one-month evolution.
On the physical examination there was no sign of fever or jaundice. The abdomen was tender to deep palpation at the right upper quadrant. Neither rebound tenderness nor distention was noted.
Imaging Findings
As a first approach, an abdominal ultrasound (US) was performed, revealing a significant dilatation of the extra-hepatic bile ducts and a slight dilatation of the intra-hepatic bile ducts with no apparent cause. A computed tomography (CT) was suggested to better characterize these findings.
The CT was performed using neutral oral contrast (water) and intravenous contrast. This study, besides the findings described in the US examination, showed the presence of a cystic lesion within the second portion of the duodenum which appeared to communicate with the common bile duct (Fig. 1), suggesting the diagnosis of a choledochocele. A magnetic resonance cholangiopancreatography (MRCP) was suggested to confirm this diagnosis.
The MRCP demonstrated similar findings to the CT reinforcing the diagnosis of choledochocele (Fig. 2 and 3).
Discussion
Bile duct cysts are an uncommon anomaly of the biliary system manifested by cystic dilatation of the extra or intra-hepatic biliary tree or both.
There are five subtypes of bile duct cysts defined by Todani et al. [1] according to the anatomical characteristics.
Type I cysts are the most common type, representing 80-90% of all lesions, and are characterized by fusiform dilatation of extra-hepatic bile ducts. Subtypes Ia, Ib, and Ic represent differences in segments involved; type II cysts are characterized by isolated protrusions or diverticula projecting from the common bile duct wall; they may be further classified into sessile or pedunculated subtypes; type III cysts, also known as choledochoceles, are characterized by a focal cystic dilatation of the intraduodenal portion of the common bile duct. Choledochoceles are further classified as type IIIa (intraluminal with common opening for the common bile duct and pancreatic duct), type IIIb (intraluminal with separate openings for the common bile duct and pancreatic duct), and type IIIc (completely intramural); type IV cysts are characterized by multiple dilatations of the intra-hepatic and extra-hepatic biliary tree, with type IVa involving both intra- and extra-hepatic dilations and type IVb involving only extra-hepatic multiple dilations; type V cysts, otherwise known as Caroli disease, are characterized by intra-hepatic biliary dilation, without extra-hepatic involvement [1, 2].

The majority of patients with choledochal cysts present during infancy or early childhood, with 80% of cases diagnosed before the age of 10 [3]. However, the disease is becoming increasingly common in adults, who usually present with nonspecific symptoms, which often lead to delayed diagnosis.
The classic triad of abdominal pain, right upper quadrant mass, and jaundice is more prevalent in the paediatric population and is reported to occur in 2%-38% of patients [4].
The choledococele (type III) is one of the least common types of choledochal cysts, occurring in only 1.4 to 4.5% of cases [5].

Although endoscopic retrograde cholangiopancreatography (ERCP) has long been the imaging technic of choice in the evaluation of the pancreatobiliary system, MRCP is being used with increased frequency, with comparable accuracy to the ERCP in multiple hepatobiliary pathologies [6]. Since MRCP is a noninvasive study, it further avoids some of the complications associated with ERCP, such as pancreatitis.
Differential Diagnosis List
Choledochocele
Duodenal duplication cyst
Intraluminal duodenal diverticulum
Final Diagnosis
Choledochocele
References 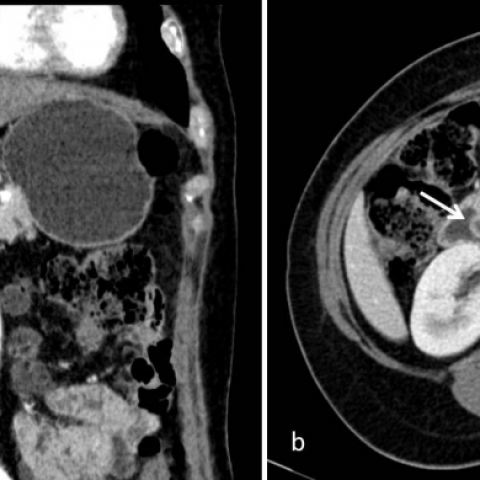 Multiplanar reconstruction (a) and axial image (b) shows a cystic lesion within the duodenum (arrow) which communicates with the common bile duct (CBD). Notice also the dilatation of the CBD (arrowhead).
Figure 2 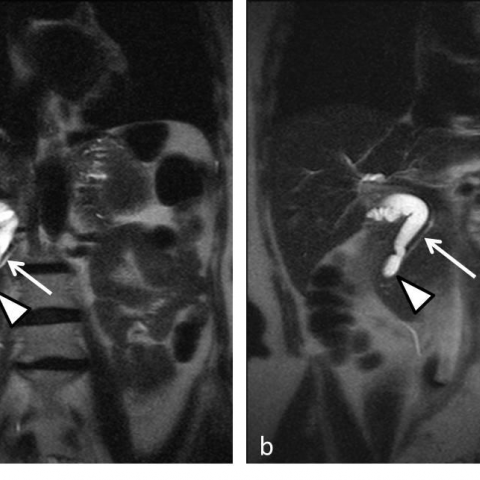 Coronal (a) and oblique (b) HASTE images showing a cystic lesion within the duodenum (arrowhead) communicating with the CBD. Notice also the dilatation of the extra-hepatic biliary ducts. The main pancreatic duct (arrow) is normal.
Figure 3 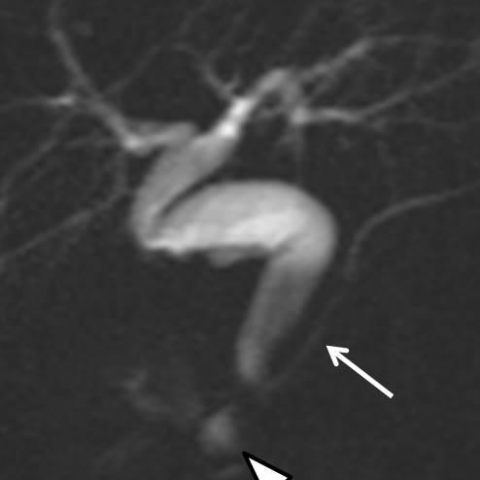 Multiplanar reconstruction (a) and axial image (b) shows a cystic lesion within the duodenum (arrow) which communicates with the common bile duct (CBD). Notice also the dilatation of the CBD (arrowhead).
Brito J, Department of Radiology, CHA, Portimão, Portugal 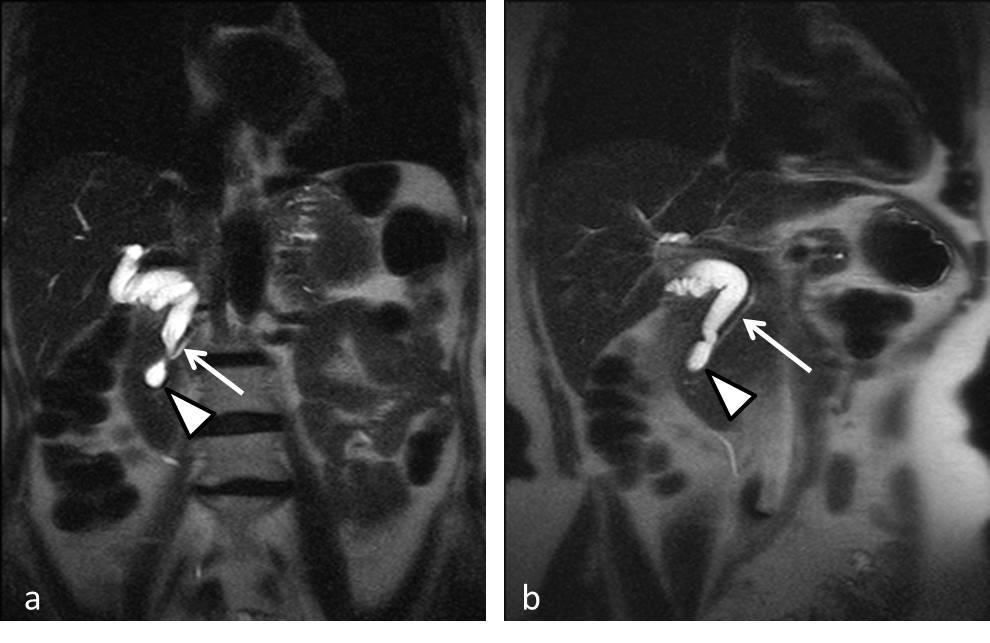 Coronal (a) and oblique (b) HASTE images showing a cystic lesion within the duodenum (arrowhead) communicating with the CBD. Notice also the dilatation of the extra-hepatic biliary ducts. The main pancreatic duct (arrow) is normal.
Tentugal C, Department of Radiology, CHA, Portimão, Portugal 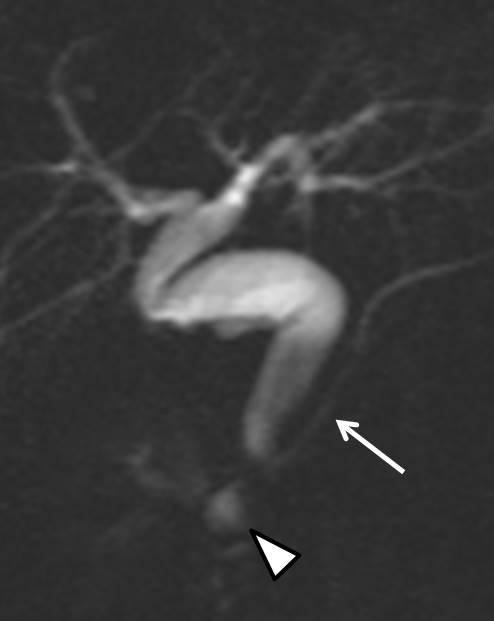