Categories
Area of Interest Abdomen ; Imaging Technique Conventional radiography, CT, Digital radiography
Procedure Diagnostic procedure, Computer Applications-Detection, diagnosis ; Special Focus Dilatation, Infection ;
Show more Show less
Download as PDF Print Show related cases Notify admin
Clinical History
A 79-year-old woman was admitted to E.R. for onset of diffuse abdominal pain, watery diarrhoea and fever. She was recently discharged from hospital where she had been treated with broad-spectrum antibiotherapy for pneumonia.
Laboratory tests showed increase of white cell count and an elevation of inflammatory parameters.
Imaging Findings
The abdominal radiograph at admittance showed normal pattern of intestinal gas in bowel loops without air-fluid levels.
Due to worsening of general condition an abdominal enhanced CT scan (CECT) was requested. This showed free fluid around the liver and spleen, diffuse colonic wall thickening with hyperdensity of the inner layer from mucosal hypaeremia that simulated the accordion sign.
On the basis of clinical symptoms and CECT findings, a diagnosis of acute inflammatory colitis was suggested.
The sigmoidoscopy performed subsequently showed a hypaeremic mucosa and yellowish plaques forming pseudomembranes on the colonic mucosa. These findings are consistent with diagnosis of pseudomembranous colitis and were confirmed later from the detection of clostridium difficile toxin in the stool.
Discussion
Pseudomembranous colitis (PMC), described by Finney in 1893, is a serious infection of the colon caused by clostridium difficile (CD) and characterised by the formation of a membranous exudate on the colonic mucosa [1].
CD is a gram-positive, spore-forming bacteria that produces and releases into the intestinal lumen certain toxins that have a cytotoxic and enterotoxic effect on the intestinal wall.
The parietal damage leads to loss of barrier function of mucosa, causing fluid secretion and consequently diarrhoea [2].
The infection occurs by ingestion of bacterial spores from environmental contamination caused from healthy carriers; this can take place more easily in hospitalised patients or in long-term care facilities.
Most often, this entity is related to previous antibiotic therapy, so that by altering the normal fecal flora, it allows overgrowth of CD [2-3].
Other risk factors can be chemotherapy, abdominal surgery and radiotherapy.
The majority of patients have mild or moderate self-limiting diarrhoea which can be associated with abdominal pain, fever, leucocytosis and dehydration.
Occasionally, the condition may start or progress with a severe, life-threatening form such as fulminant colitis, toxic megacolon or colonic perforation by full-thickness necrosis of the colonic wall [4-5].
Due to non-specific symptoms, the diagnosis may not be suspected clinically.
The diagnostic imaging can hence play an important part in suggesting this possibility.
Plain radiograph and barium enema can all show a dilated colon, thumbprinting and thickening of the haustral folds but, being less sensitive, have been almost completely superseded by CECT. This is a very effective tool for detection and characterisation of colon diseases and can better evaluate the extension and severity of the disease or detect potential complications [1-6].
The most common finding is a colonic-wall thickening that can involve the entire colon or be limited to a few tracts. The parietal thickening may be circumferential or most often eccentric and irregular. Generally, the small bowel is not involved.
After intravenous administration of contrast medium, a marked enhancement of mucosal layer (target sign) can be noted, attributable to mucosal hyperaemia.
Other findings are pericolonic stranding, ascites by hypoalbuminaemia and the “accordion sign" that can be seen after administration of oral contrast and caused by an alternation of oral contrast, trapped between oedematous haustral folds and the pseudomembranes on the surface of the colon [6]
Discontinuation of antibiotic therapy and oral metronidazole can solve the mild-to-moderate forms.
In severe cases, oral or intracolonic vancomycin is the treatment of choice in that it has the greatest efficacy. Complications such as toxic megacolon or bowel perforation may require surgical therapy.
Differential Diagnosis List
Pseudomembranous colitis
Ulcerative colitis
Crohn\'s disease
Ischaemic colitis
Final Diagnosis
Pseudomembranous colitis
References 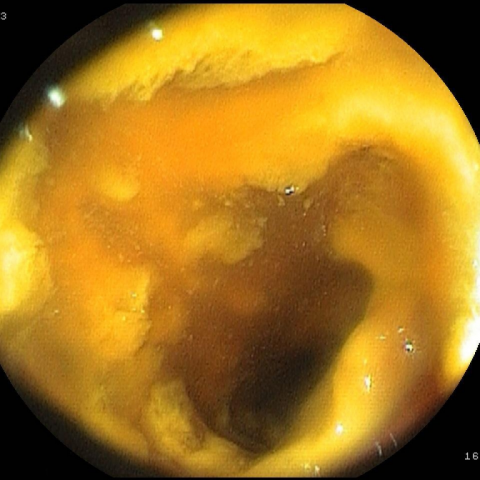 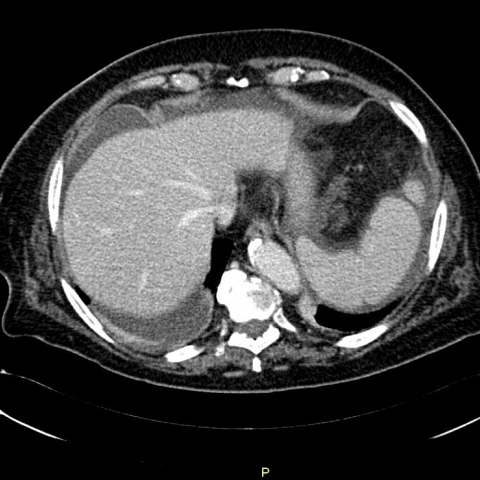 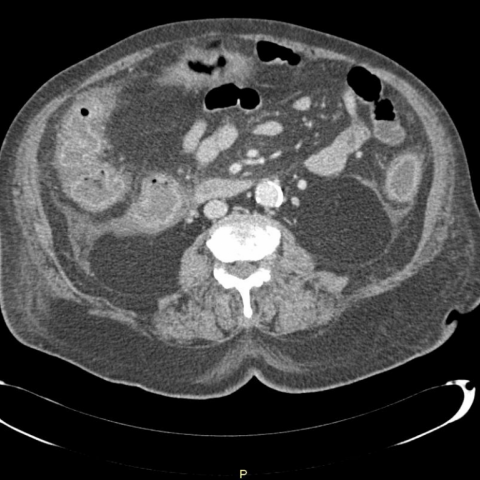 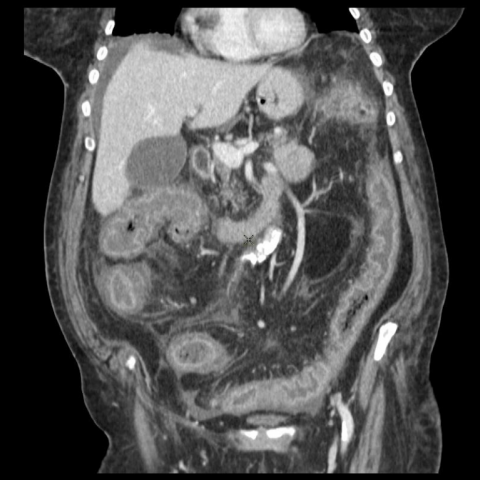 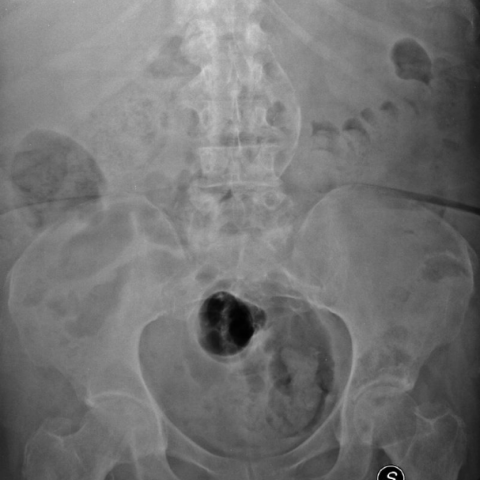 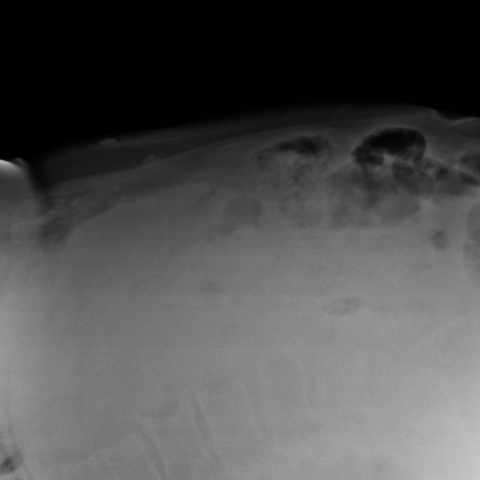 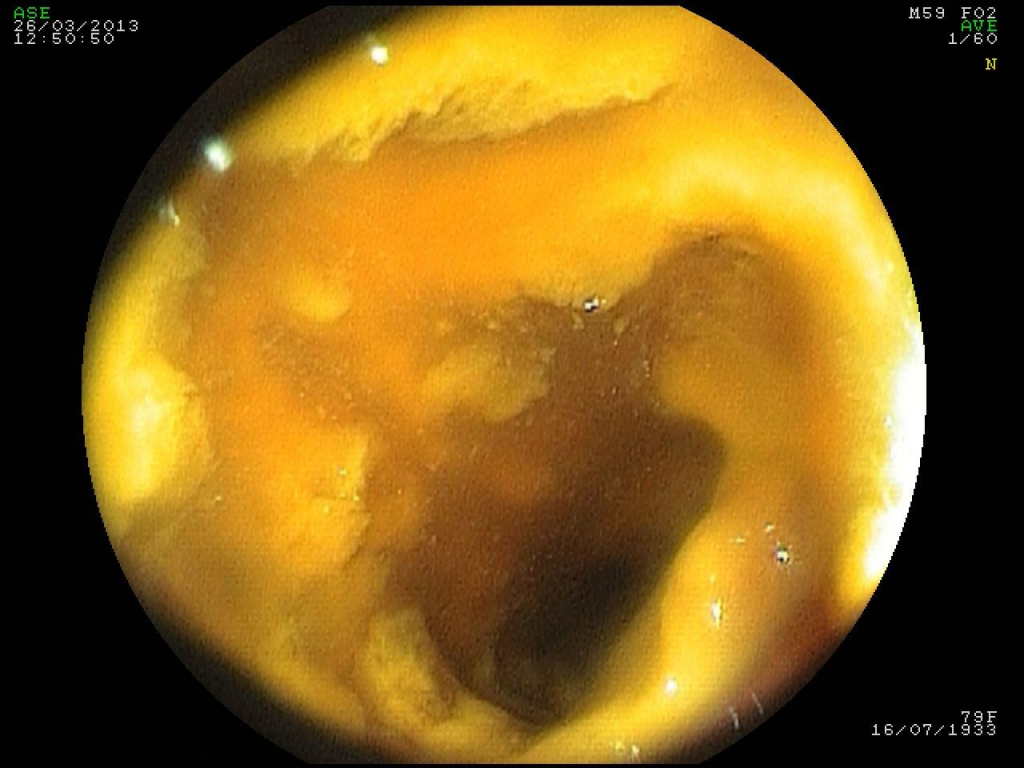 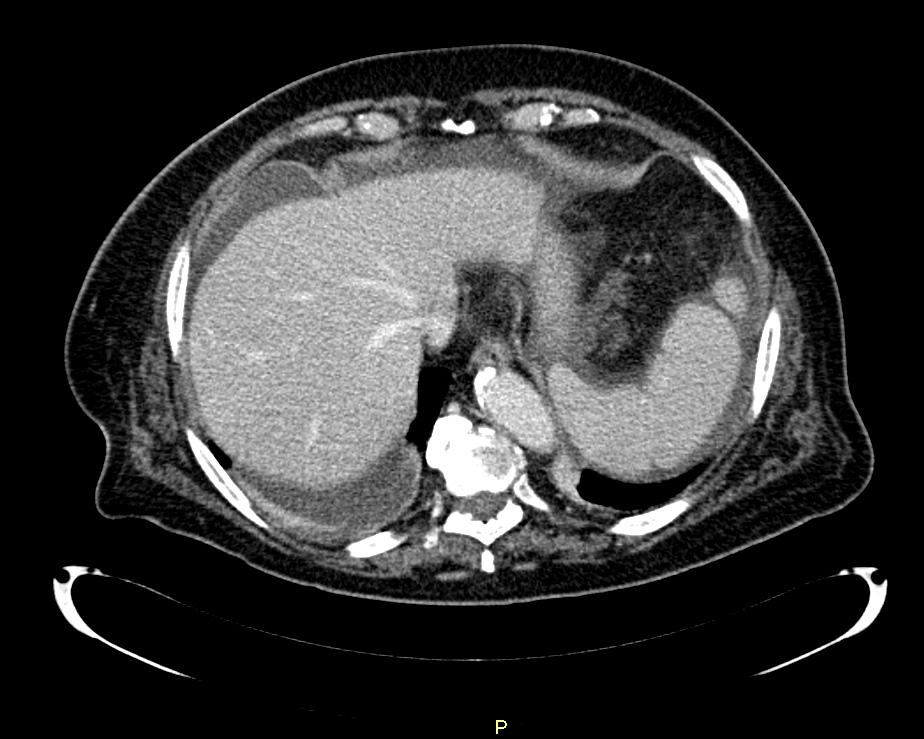 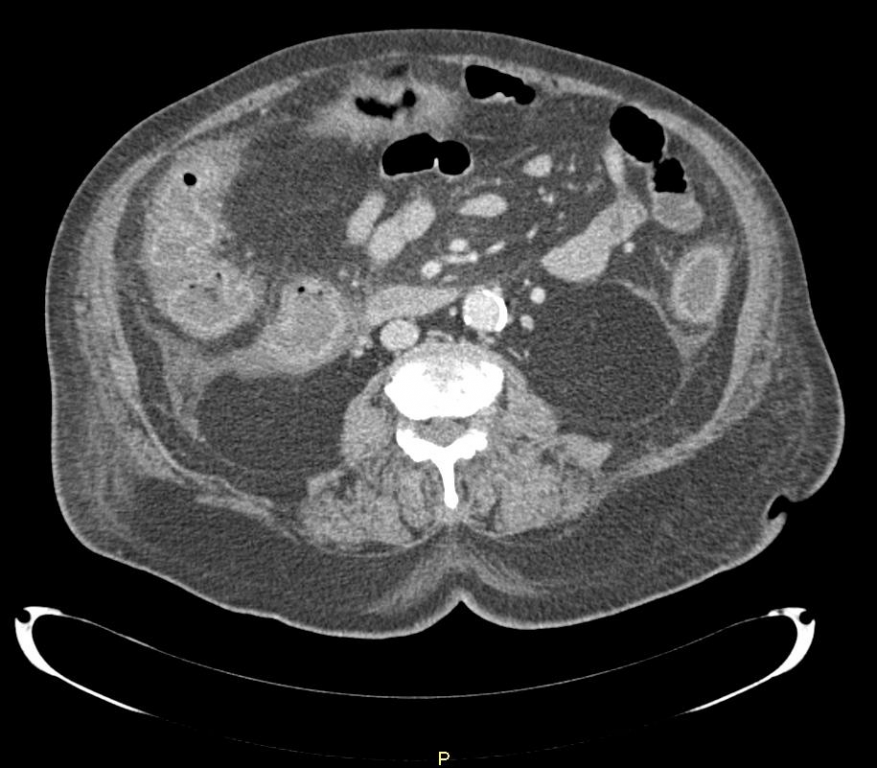 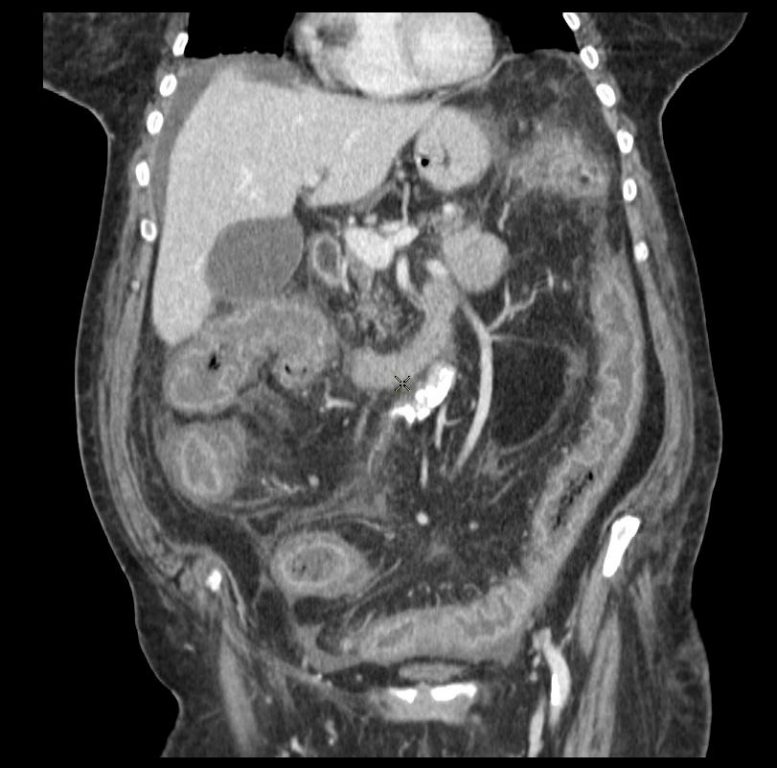 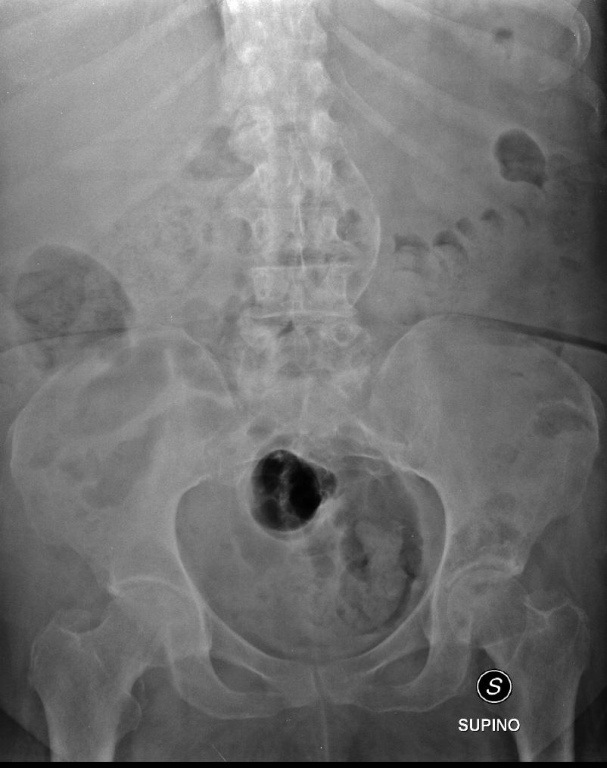 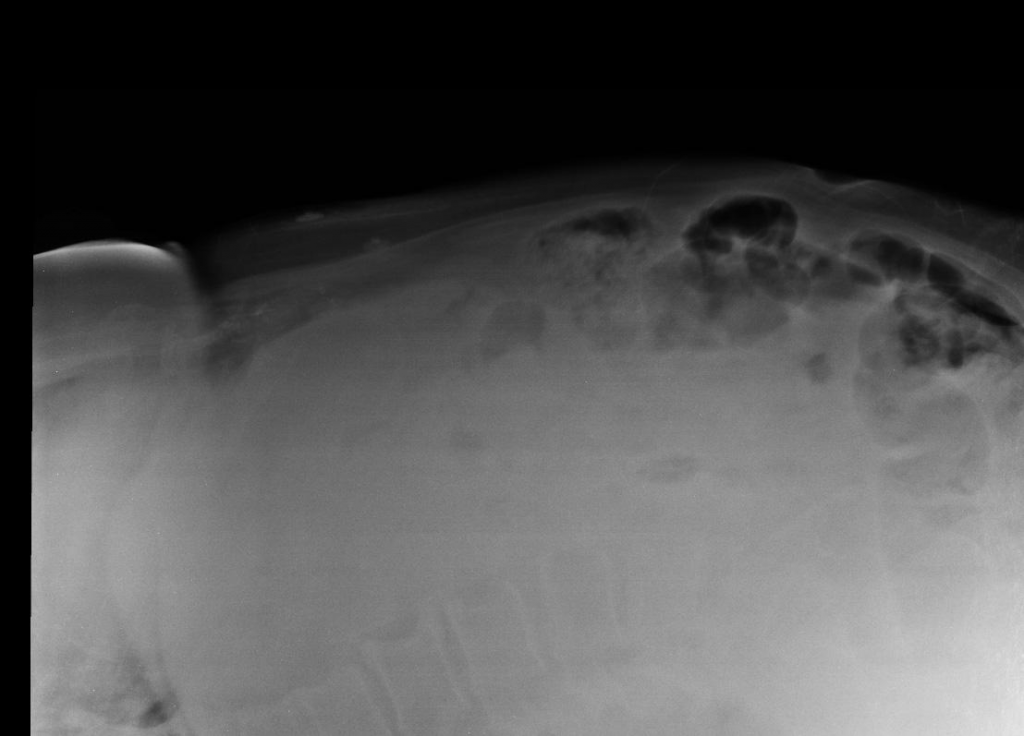