Torsion of the testicular appendage

Categories
Area of Interest Genital / Reproductive system male ; Imaging Technique Ultrasound-Colour Doppler
Procedure Diagnostic procedure ; Special Focus Acute ;
Show more Show less
Download as PDF Print Show related cases Notify admin
Clinical History
11-year-old boy presented at the emergency department with a 4-hour history of left-sided testicular pain and swelling. Physical examination showed tenderness on the left scrotum with a small, well-defined, palpable nodule on the superior aspect of the testis. A scrotal ultrasound examination was requested.
Imaging Findings
Gray scale sonogram revealed a round and heterogeneous nodule with a salt-and-pepper pattern between the left testis and the head of the left epididymis. Colour Doppler sonogram showed no vascularity in the nodule, which slightly compressed the upper pole of the left testis. Gray scale sonogram also showed a hydrocele and scrotal wall thickening in the left half of the scrotum. The left testis and the left epididymis had normal vascularity and a normal echographic appearance.
Discussion
Torsion of the testicular appendix is the commonest cause of acute scrotum in children (aged 7–14 years) and is more frequent on the left side.
There are five testicular appendages, which are the remnants of the mesonephric (wolffian) and paramesonephric (müllerian) ducts.
The most common appendages involved are the testicular and epididymal appendages. The testicular appendage is found at the upper pole of the testis in the groove between the testicle and the epididymis. The epididymal appendage is found at the head of the epididymis. The appendages are sessile structures, which predisposes them to torsion, leading to ischaemia and infarction. [1]
Patients who have torsion of the appendix testis present with acute scrotal pain, usually localized in the upper pole of the testis, and degree of scrotal redness and swelling.
The ultrasound appearance of the twisted appendage is a round extra-testicular mass, which may be hypoechoic with a reflective rim, or hyperechoic to the testis, and there is no Doppler signal. A reactive hydrocele, scrotal skin thickening and an enlarged epididymal head are common findings.
The role of the ultrasound in torsion of the testicular appendage is to exclude testicular torsion or acute epididymo-orchitis. Torsion of the appendage is a benign condition while testicular torsion is a urologic emergency. Most cases of appendage torsion are treated conservatively (bed rest and nonsteroidal anti-inflammatory agents) and the necrotic tissue is reabsorbed without any sequelae in almost all cases. [2]
Differential Diagnosis List
Torsion of the testicular appendage
Testicular torsion
Torsion of epididymal appendage
Epididymo-orchitis
Final Diagnosis
Torsion of the testicular appendage
References 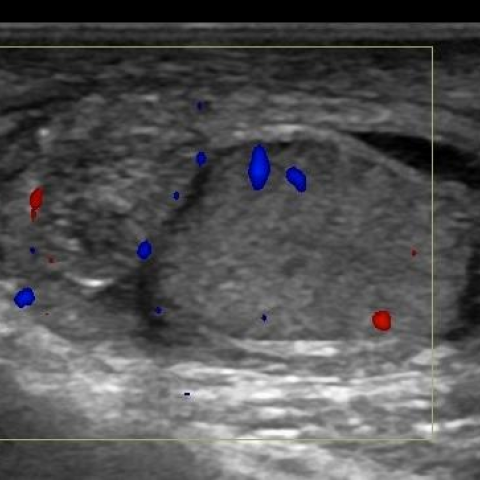 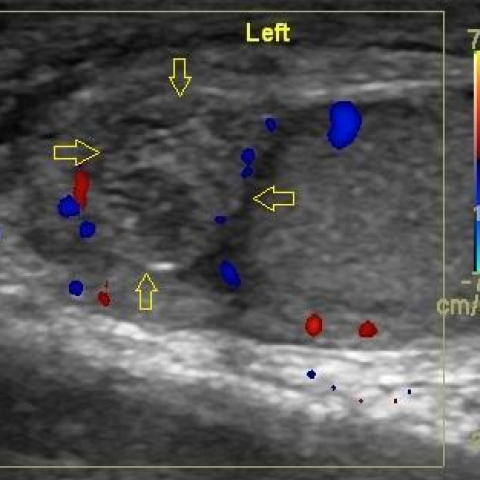 Color Doppler sonogram obtained in longitudinal view shows no blood flow in heterogeneous nodule (arrows) with a salt-and-pepper pattern between the testis and the head of the epididymis.
Figure 2 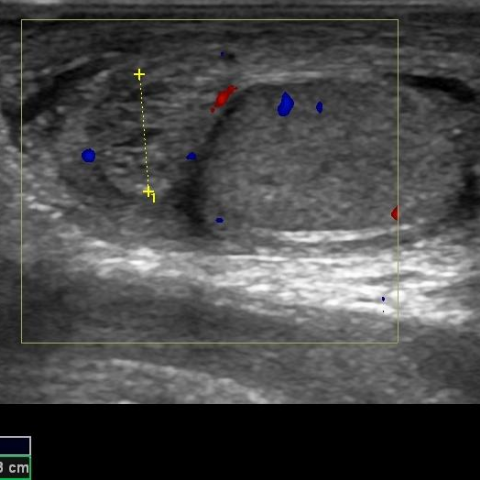 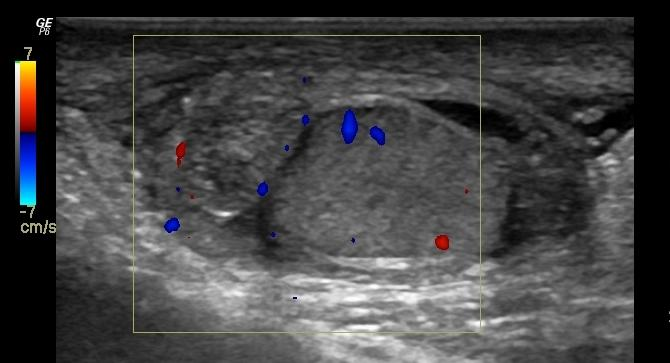 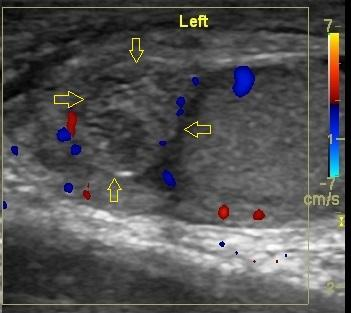 Color Doppler sonogram obtained in longitudinal view shows no blood flow in heterogeneous nodule (arrows) with a salt-and-pepper pattern between the testis and the head of the epididymis.
Department of Radiology, General hospital of Thessaloniki, IPPOKRATEIO 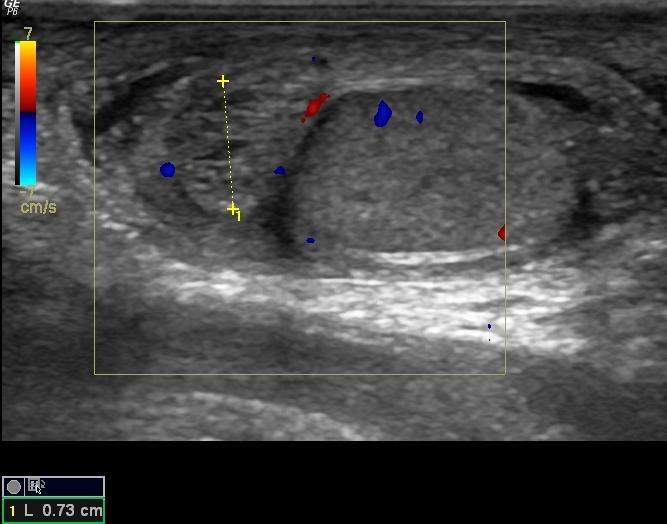 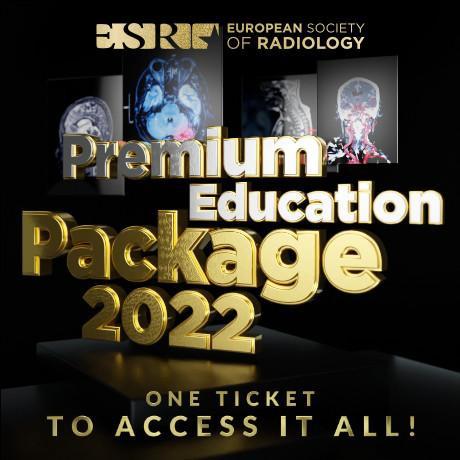