Case report of a supratentorial PNET with unusual radiological presentation

Categories
Area of Interest Neuroradiology brain ; Imaging Technique MR
Procedure Computer Applications-Detection, diagnosis, Comparative studies ; Special Focus Neoplasia ;
Show more Show less
Download as PDF Print Show related cases Notify admin
Clinical History
A 13-year-old boy, previously fit and healthy, presented with a short history of headache, vomiting and lethargy. No neurological deficit was elicited from clinical examination. Intra-operatively, the mass lesion was found to be intra-axial.
Imaging Findings
The CT and MRI head showed a solitary large mass lesion in the right inferior frontal lobe which had a cystic centre and an irregularly thick enhancing peripheral wall, expanding the right olfactory groove with depression of the cribriform plate and causing deviation of the crista galli. On imaging alone, it was difficult to be entirely certain whether the mass lesion was intra- or extra-axial.
Discussion
Primitive Neuroectodermal Embryogenic Tumour (PNET) belongs to a subgroup of embryonal tumours that originate from primitive or undifferentiated neuroepithelial cells. PNETs are high grade malignant cerebral tumours, which usually occur in children and young adults under 25 years of age. The WHO 2000 classification has separated PNET and medulloblastoma into two distinct subtypes of embryonal tumours. The WHO 2007 classification then categorised CNS neuroblastomas, CNS ganglioneuroblastomas, medulloepitheliomas and ependymoblastomas as subtypes of PNET. [1]

Supratentorial PNETs typically present as an intraxial large complex mass with minimal peritumoural oedema with heterogeneous enhancement. Calcification is often present in most cases. [2] In our patient, there was a large mass lesion in the inferior frontal lobe with no evidence of radiological calcification. Expansion of the olfactory groove indicated a slow growing tumour and this particular feature is more in keeping with esthesiuneuroblastoma, a rare neoplasm of the sinonasal area. It typically involves the ethmoid and maxillary sinuses, but intracranial extension through the cribriform plate can also be present. [3] On imaging alone, it was difficult to be entirely certain whether the mass lesion was intra- or extra-axial. The initial principal radiological diagnosis was thought to be an esthesioneuroblastoma. Other differentials such as meningioma and olfactory tract schwannoma were also considered.

A case of a PNET in a similar location to our patient was previously described by Niwa, J. et al. 2001. [4] This was a large solid mass lesion extending through the olfactory groove and into the ethmoid sinuses, in a 5 month-old male infant. However, no expansion of the olfactory groove was described. The lesion was later found to be an extra-axial PNET. Extra-axial PNET is very rare. Although an extra-axial lesion was considered in our case, operative findings confirmed that the lesion was indeed intra-axial.

Figueiredo, E. et al. 2009 [5] reported a rare case of olfactory groove schwannoma with very similar radiological appearances to our case. As in our case, there was uncertainty about whether the lesion was intra- or extra-axial. The origin of the tumour remained unclear, but it was thought that the tumour was most likely to arise from meningeal branches of trigeminal nerve and anterior ethmoidal nerves. However, we also note that anterior cranial fossa schwannomas are very rare tumours with about 30 cases described so far. 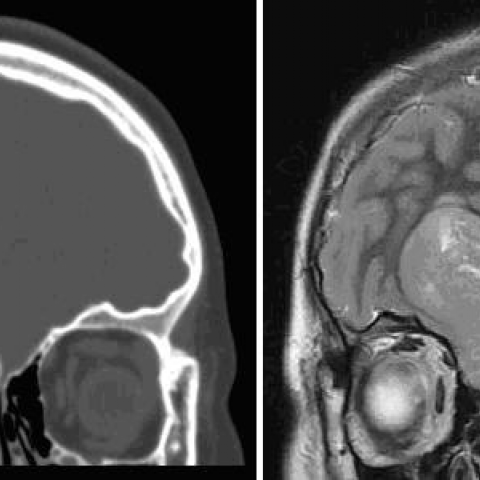 There is a large heterogeneous mass lesion in the anterior cranial fossa which extends to and expands the olfactory grove on the right, with deviation of the crista galli towards the left.
Figure 2 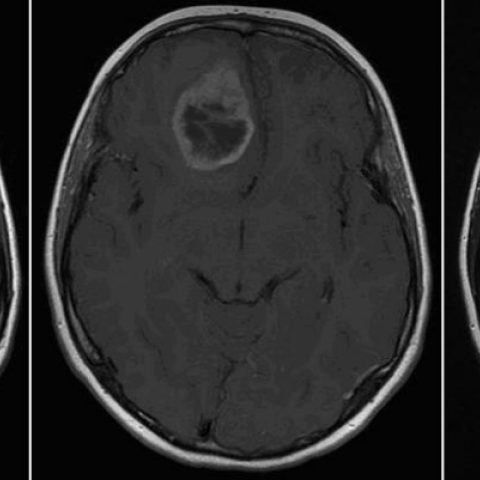 Axial T1W (pre-and post contrast, left and middle) and T2W (right) images. There is a mass lesion with a central cystic component in the right frontal lobe with irregular and thick rim enhancement.

There is a large heterogeneous mass lesion in the anterior cranial fossa which extends to and expands the olfactory grove on the right, with deviation of the crista galli towards the left.
C Gan, Radiology Department, Morriston Hospital, U.K.