Categories
Area of Interest Liver, Abdomen, Thorax ; Imaging Technique Ultrasound, CT
Procedure Diagnostic procedure ; Special Focus Acute ;
Show more Show less
Download as PDF Print Show related cases Notify admin
Clinical History
An 81-year-old female patient presented with abdominal pain. Physical examination showed flatulence and diffuse abdominal sensitivity while auscultation revealed no bowel sounds on the right abdominal area. Laboratory tests showed increased CRP, amylase and White Blood Cell count with neutrophilia.
Imaging Findings
The patient was referred for chest and abdominal radiograph. Chest radiograph showed air under the right hemidiaphragm (Fig. 1). Abdomen radiograph revealed air under the right hemidiaphragm, small quantity of free air between the stomach and the left hemidiaphragm and suspicion of gas in the area of liver which could represent gas in the portal veins or in the biliary tract (Fig. 2).
Abdominal ultrasound of this patient revealed echogenic dots within liver parenchyma which was considered to represent air in the portal veins (Fig. 3).
Abdominal CT demonstrated bubbles of free intraperitoneal gas, gas shadows extending to the periphery of the liver, which represented portal venous gas, cortical cysts in both kidneys and mild dilatation of the stomach and duodenum with filling of the lumen with fluid. There were also bubbles of gas inside the wall of the third part of the duodenum (Fig. 4, 5, 6, 7).
Discussion
Background: Gas shadows inside the liver may lie either in the portal veins or in the biliary tract (pneumobilia). In CT portal vein gas appears as tubular, branching, hypodense shadows which lie within the periphery of the liver (within 2cm) due to the blood flow. Gas in the biliary tract may be seen as branching gas shadows which are located centrally due to the flow of bile. In this case, gas may be seen also in the common hepatic duct or the wall of the gallbladder. Both situations have a left liver lobe predilection [1, 2].
Differential diagnosis of gas in the portal veins comprises mesenteric infarction, inflammatory disease of the bowel, gastric ulcer perforation, double contrast barium enema, congenital gastrointestinal obstruction and other less frequent causes like haemorrhagic pancreatitis, sigmoid diverticulitis, pneumonia etc. Concerning children, necrotising enterocolitis should be included in the differential diagnosis [2, 3, 5].
Differential diagnosis of pneumobilia includes incompetence of the sphincter of Oddi, gallstone ileus, emphysematous cholecystitis, trauma, duodenal ulcer perforating into the common bile duct and postoperative situations [2, 3].
Clinical perspective: Depending on the cause of portal venous gas, clinical presentation may vary between asymptomatic patients after double contrast barium enema to acute abdomen and patients with mesenteric ischaemia. In the latter occasion, the referring physician needs imaging to establish the diagnosis and decide whether surgery is needed [6].
Imaging perspective: Abdominal radiography can demonstrate portal venous gas as linear gas shadows in the liver only when there is a considerable amount of it. Ultrasound can show echogenic foci or gas bubbles in line (“string of pearls”) within the liver or the lumen of portal vein. Computed tomography is a more sensitive examination. Gas can be seen also in the mesenteric veins [2, 3, 4].
Outcome: Prognosis and treatment of gas in the portal veins depends on its cause. When it is caused by mesenteric infarction, prognosis is poor (mortality 85%) and urgent surgery is needed. On the other hand, when portal venous gas is seen as an iatrogenic consequence, the outcome is good and no surgery is needed [3, 6].
In our case, the patient underwent surgery which revealed perforation of the jejunum. The ruptured part of the intestine was resected. Histology showed lymphoid cells diffusely located in the intestinal wall, ulceration of the epithelium and many enlarged vessels. These findings suggest lymphoma of the small intestine.
Differential Diagnosis List
Surgery revealed perforation of the jejunum due to lymphoma (histology).
Mesenteric infarction
Inflammatory disease of the bowel
Gastric ulcer perforation
Incompetency of the sphincter of Oddi
Gallstone ileus
Duodenal ulcer perforating into the biliary tree
Perforation of the small intestine due to other reasons (e.g. lymphoma)
Final Diagnosis
Surgery revealed perforation of the jejunum due to lymphoma (histology).
References 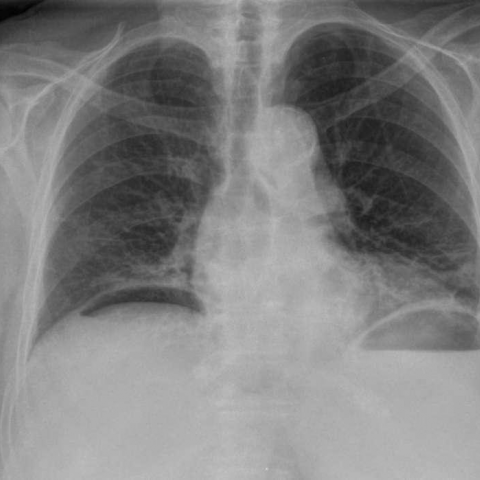 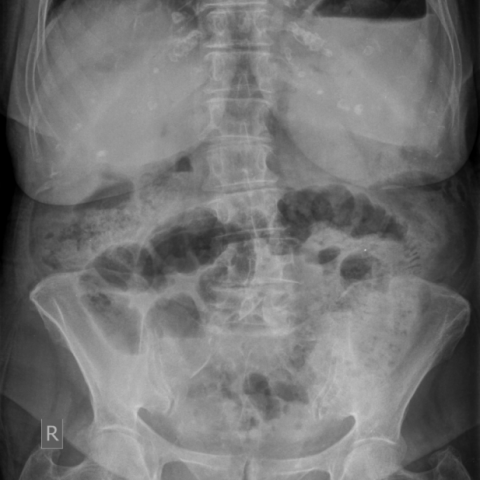 Play Video
Abdomen radiograph showed air under the right hemidiaphragm and between the stomach and the left hemidiaphragm. There was also suspicion of small gas shadows in the area of liver.
Figure 3 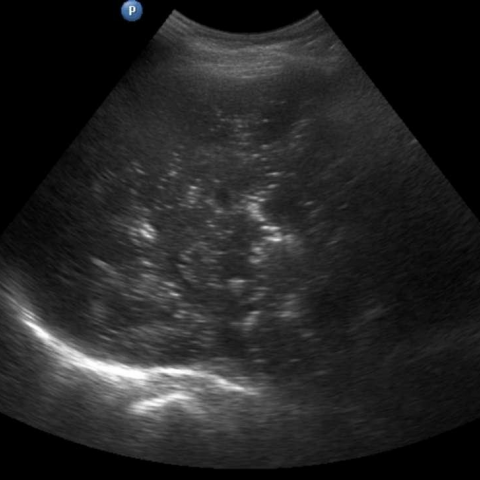 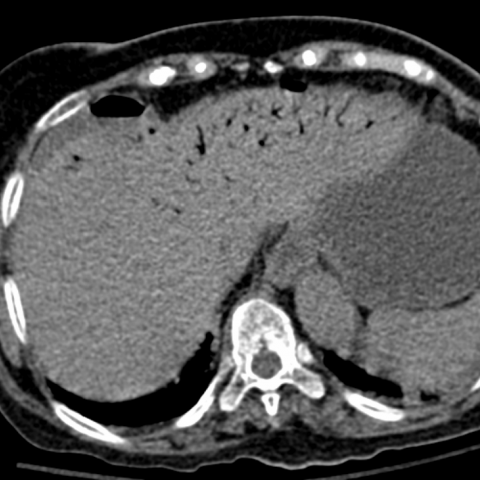 Play Video
CT slice showing gas shadows in the periphery of the liver, in the left liver lobe.
Figure 5 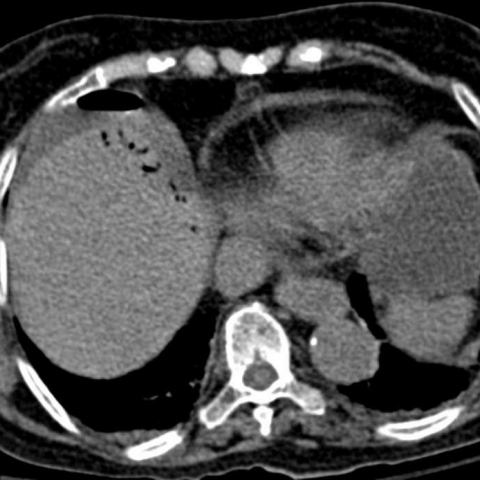 CT slice showing an air-fluid level under the right hemidiaphragm and some gas shadows in the right liver lobe.
Figure 6 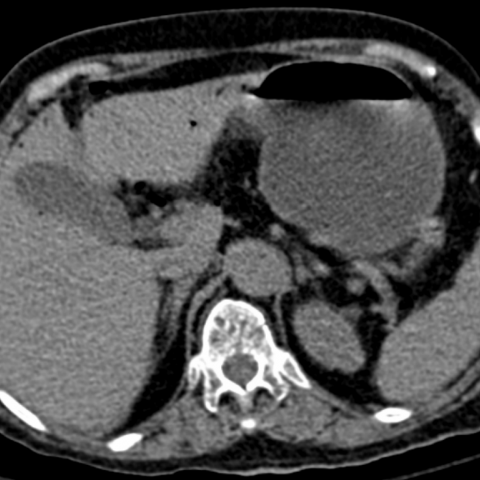 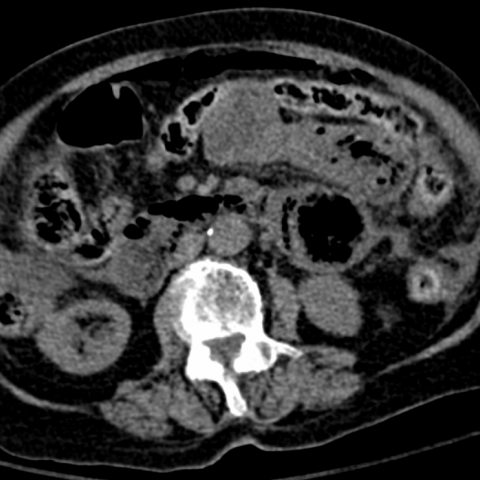 Play Video
CT slice showing gas bubbles in the wall of the duodenum. 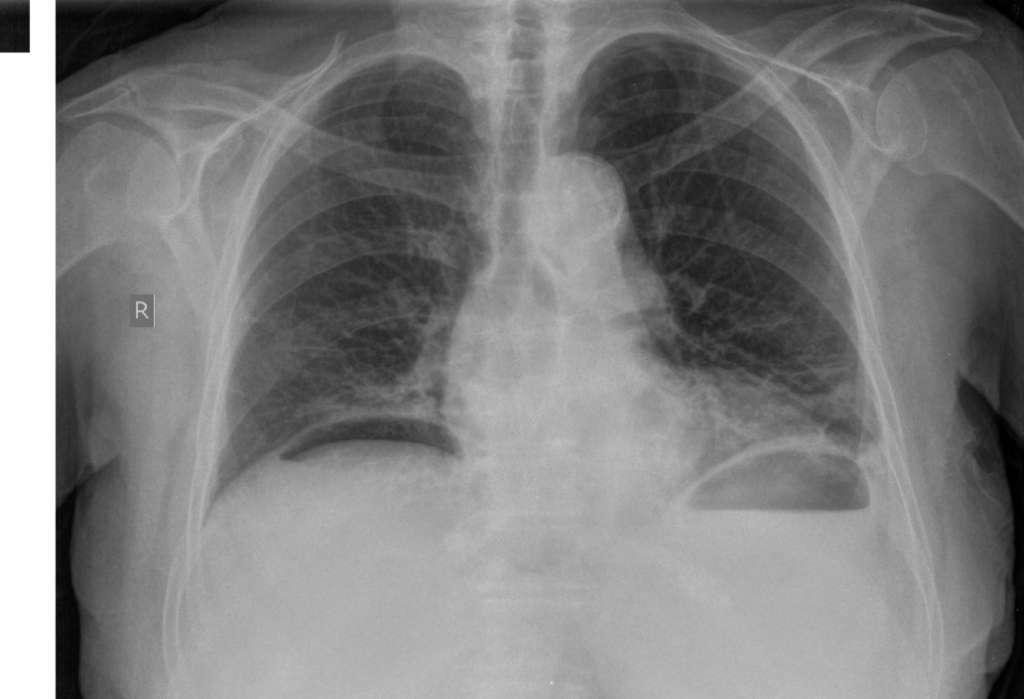 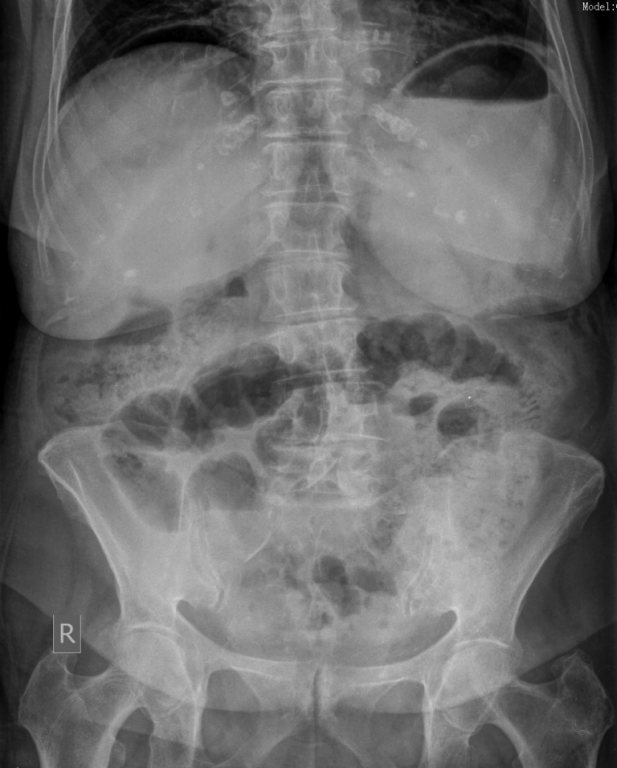 Abdomen radiograph showed air under the right hemidiaphragm and between the stomach and the left hemidiaphragm. There was also suspicion of small gas shadows in the area of liver.
Radiology Department, General Hospital of Katerini, 6 km Katerini-Arona 60100, Katerini, Greece. 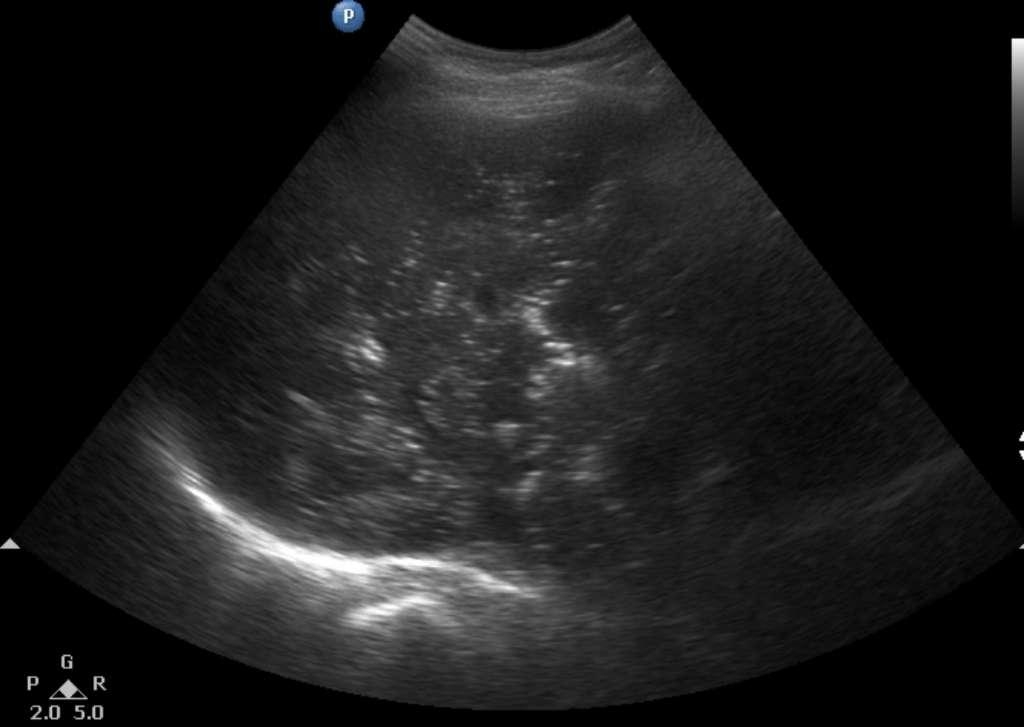 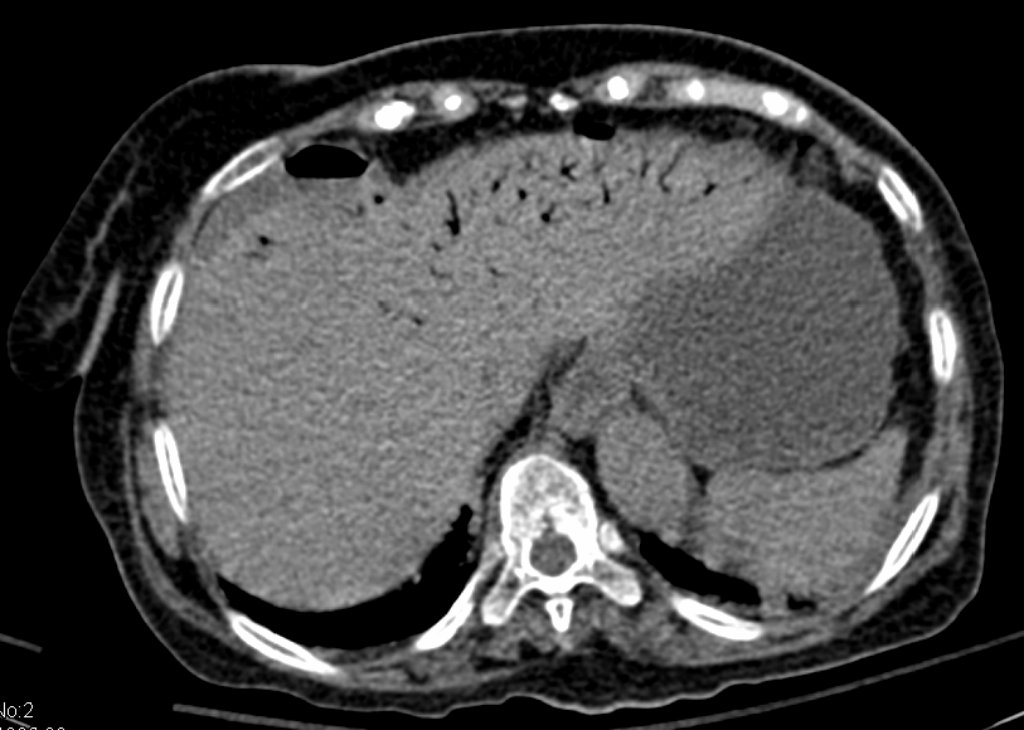 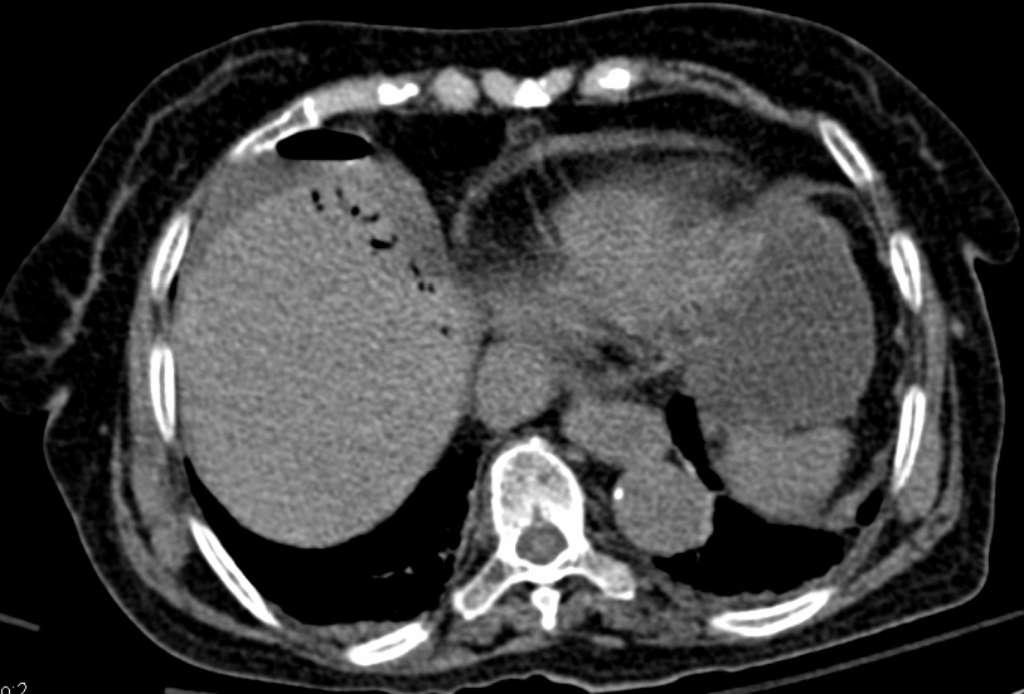 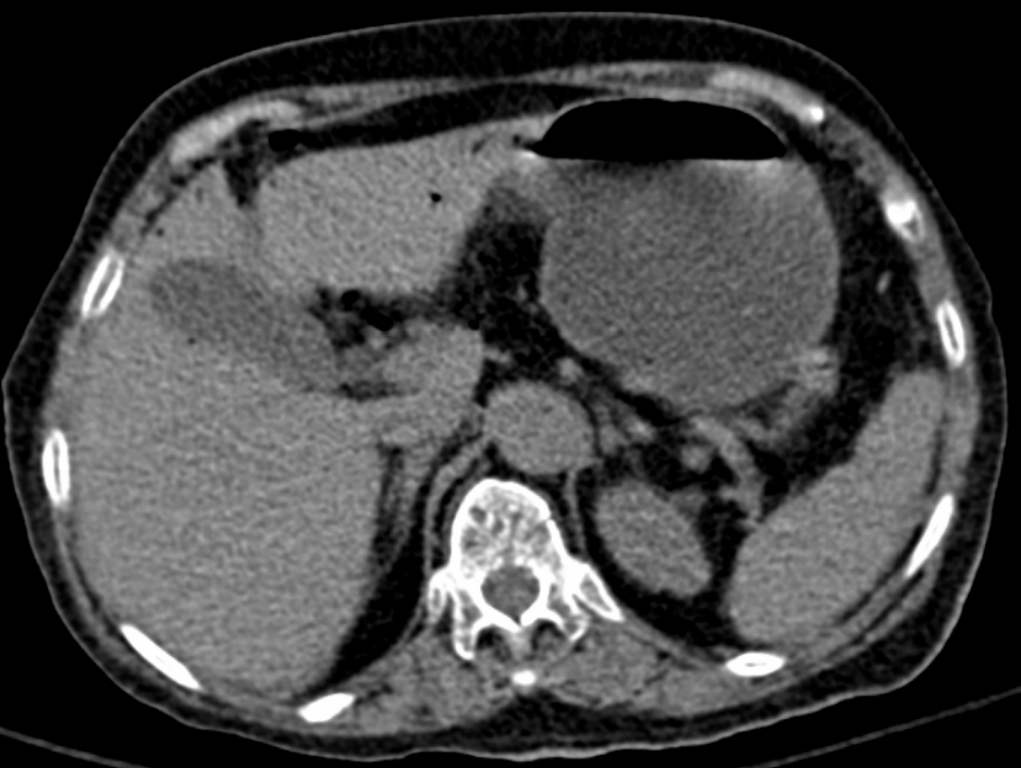 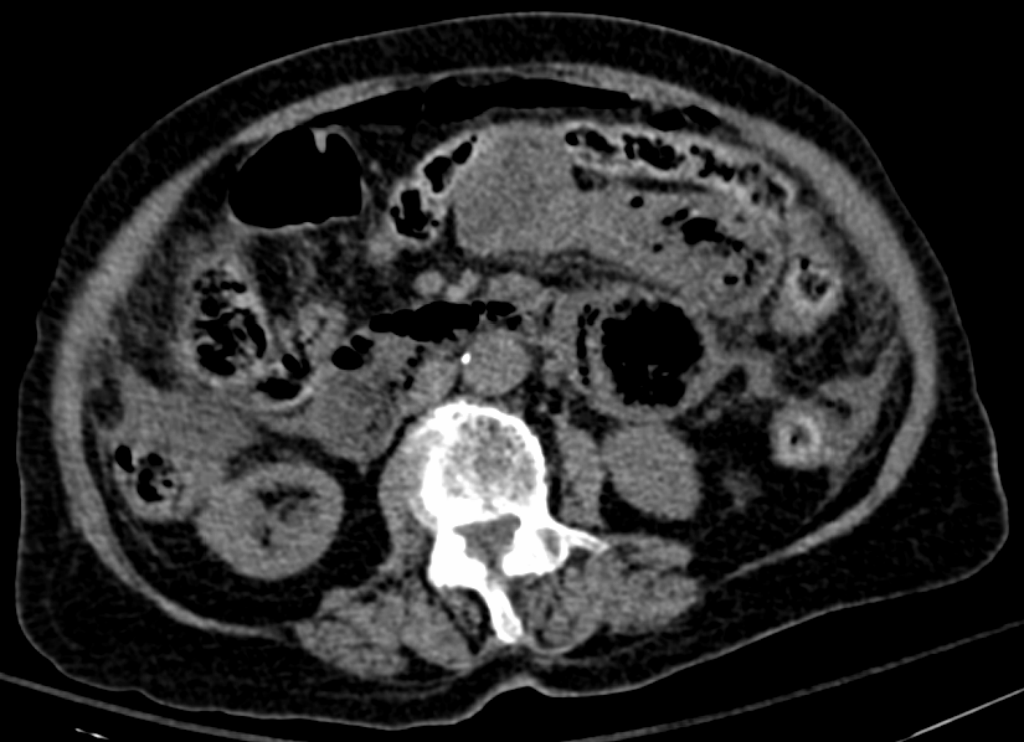