Categories
Area of Interest Cardiovascular system ; Imaging Technique CT-Angiography, Catheter arteriography
Procedure Computer Applications-Detection, diagnosis, Computer Applications-3D, Embolisation ; Special Focus Arteriovenous malformations, Prostheses ;
Show more Show less
Download as PDF Print Show related cases Notify admin
Clinical History
A 72-year-old white man presented to the Emergency Room with asthenia, dyspnoea and abdominal pain.
Physical examination revealed bilateral leg oedema.
Chest X-ray showed enhanced pulmonary vascular shadow and cardiomegaly. An emergency CT was requested.
Imaging Findings
CECT arterial phase revealed a saccular aneurysm of the left iliac common artery, with maximum diameters of 45x45x30 mm, with eccentric thrombotic apposition of 13 mm posteriorly. The right common iliac artery was dilated and tortuous, with a maximum diameter of 2.5 cm (Fig. 1-3). Remarkable was the early appearance of contrast medium in the inferior vena cava and in the left iliac femoral venous branch with the same arterious attenuation value, indicating an AV (arteriovenous) shunt. Volume rendering reconstructions confirmed the presence of the fistula on the right-posterior wall of the left common iliac artery aneurysm with the adjacent wall of the left common iliac vein. The main diagnostic sign was the increase of the contrast enhancement in the inferior vena cava from the distal tract downward the common iliac veins producing a reverted bloodstream inside the vessel.
Discussion
 Etiology & demographics:
An arteriovenous fistula is a very rare condition presenting in 0.2-1.3% of all abdominal aortic aneurysms, and there are only few cases of ilioiliac fistula due to isolated iliac common artery aneurysm reported in the literature.
Ilio-iliac AVFs may either be congenital or acquired.
This condition has a male preponderance, generally affects the the elderly, and its main risk factors are diabetes, obesity and hypertension.
The preoperative diagnosis of ilioiliac fistula is difficult and often delayed or even missed because of the rare frequency and because the clinical presentation is variable and depends on the size and location of the fistula. After the diagnosis is established, the treatment repair is indicated in all cases [1, 3].

 Clinical & imaging findings:
Although catheter angiogram still remains the ‘gold standard’ for assessment of AVFs as well as assisting in assessing options for endovascular management, it is no longer the diagnostic modality of choice and should be used only when CT or magnetic resonance imaging (MRI) is unable to clearly demonstrate the lesion [4].
Furthermore, different computerised reconstruction techniques by CT such as maximum intensity projection (MIP), volume rendering (VR) and virtual angioscopy provide easily accurate location and size of AVF, which helps to plan the endovascular treatment [5].
With the development of CT the diagnosis of AVF can be established noninvasively and CT is used for the preoperatory planning and for the follow up after treatment.


 Treatment & prognosis:
A percutaneous transcatheter embolisation of the left internal iliac artery was successfully performed by the deployment of a 8 mm Amplatzer Vascular Plug 2, in order to avoid the risk of type II endoleak. A pre-operative angiography confirmed the presence of a high flow ilio-iliac arteriovenous fistula (Fig 4).
Post-embolisation angiography showed complete exclusion of the left hypogastric artery (Fig. 5).
Two days later an Endurant aorto-biiliac endoprosthesis was percutaneously inserted through bilateral femoral accesses and positioned below the renal arteries to the external iliac artery on the left side and above the common iliac bifurcation on the right side (Fig. 6).
We obtained complete exclusion of both aneurysm and the closure of arteriovenous communication, our patient remained asymptomatic, without enlargement of aneurismal sac at post-operative CT.
Multidetector CT enabled quick and precise diagnosis of an ilioiliac fistula, which facilitated an endovascular approach [2]. We believe that endovascular treatment is safe, has a good feasibility and should be considered as an alternative to the open surgery.
Differential Diagnosis List
Ilioiliac fistula due to iliac common artery aneurysm
Abscess
Ischaemic enteritis
Diverticulitis
Final Diagnosis
Ilioiliac fistula due to iliac common artery aneurysm
References 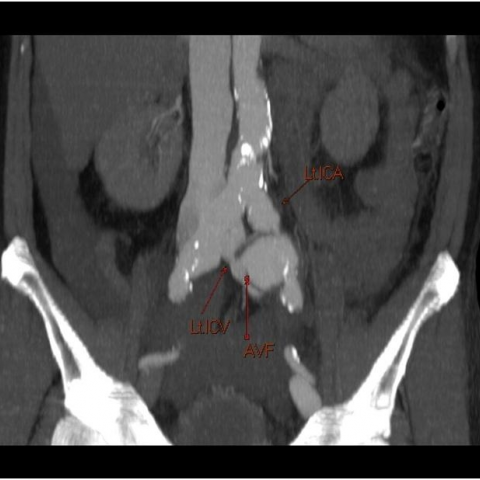 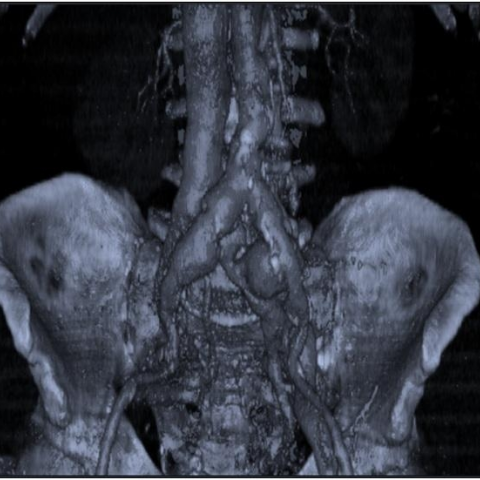 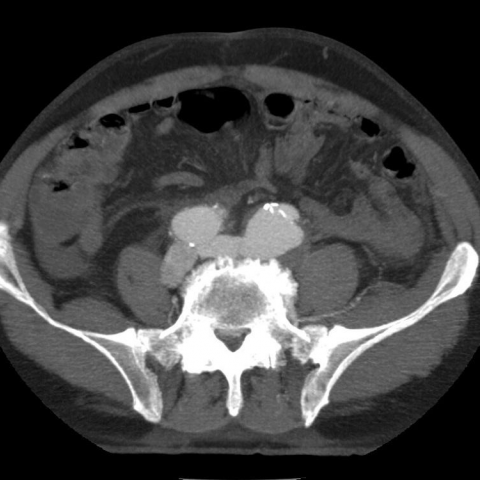 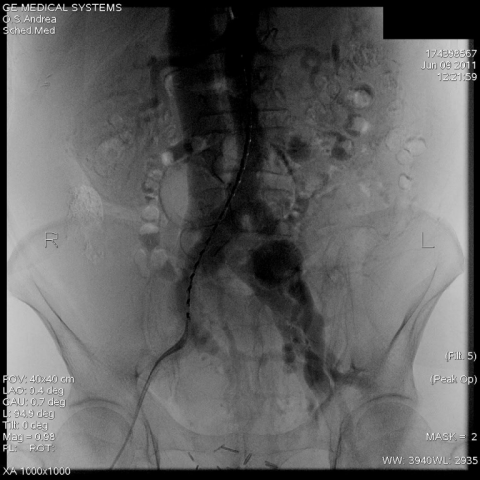 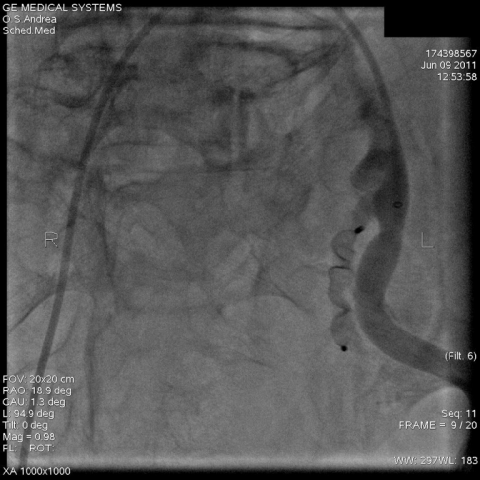 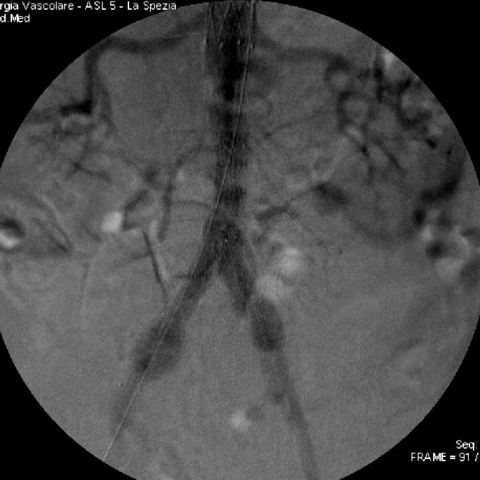 Angiography performed after endoprosthesis deployment shows no venous filling of the aneurismal sac with correct exclusion of arterio-venous fistula and correct placement of aorto-biiliac endograft. 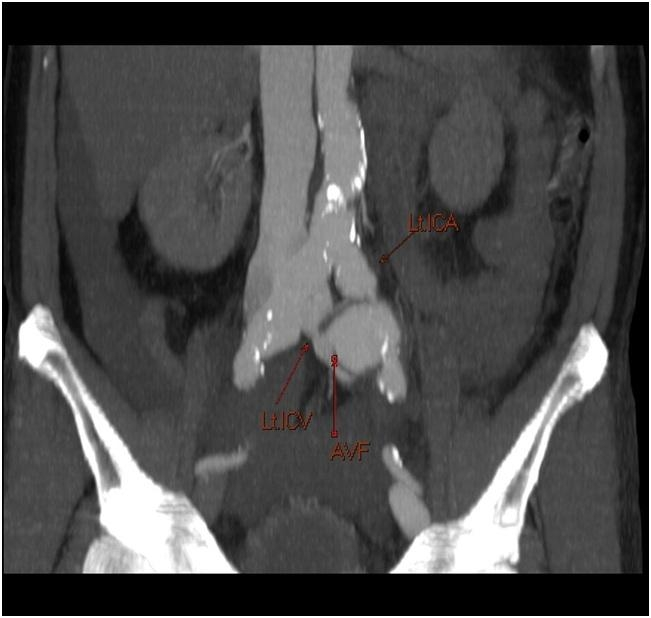 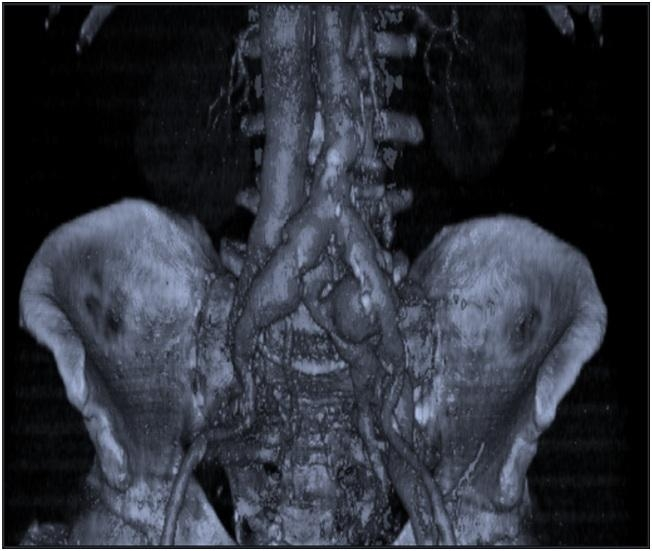 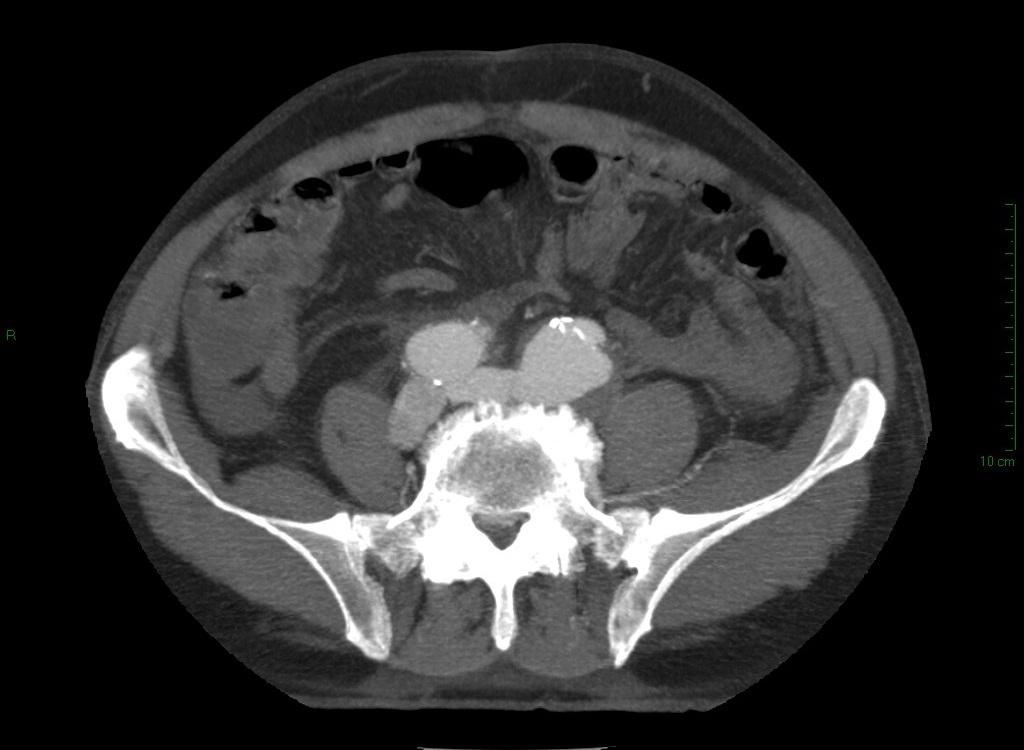 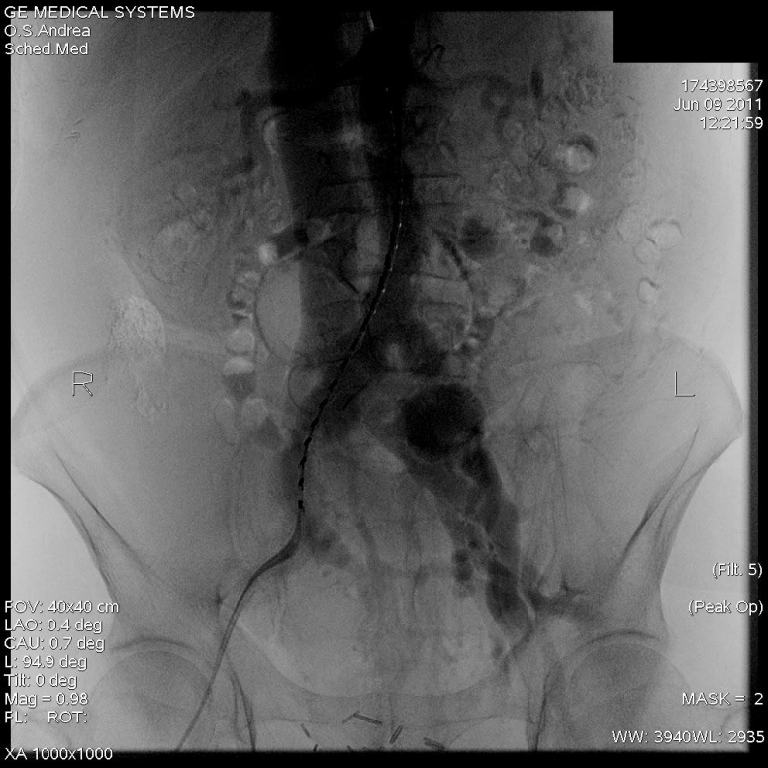 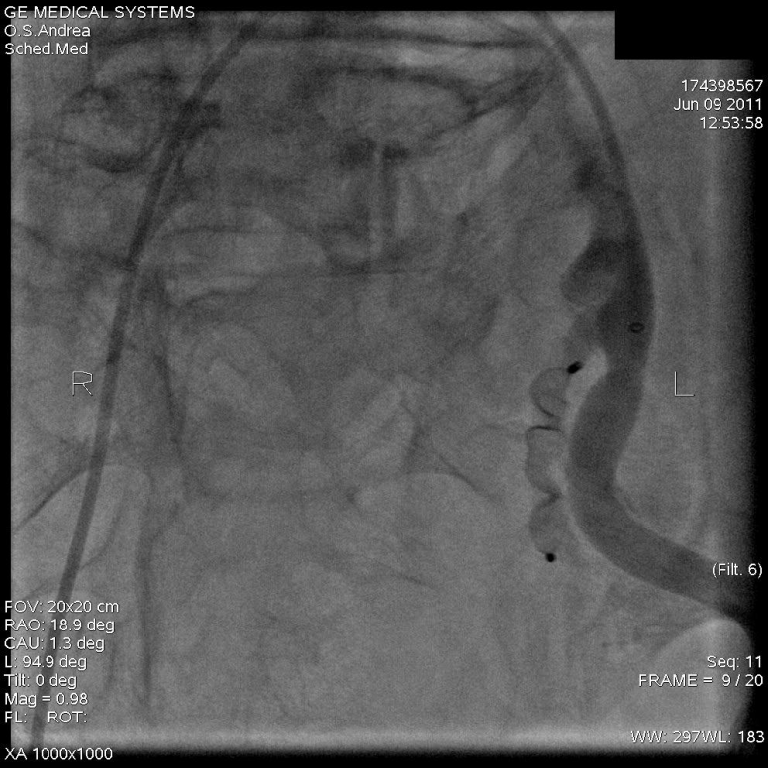 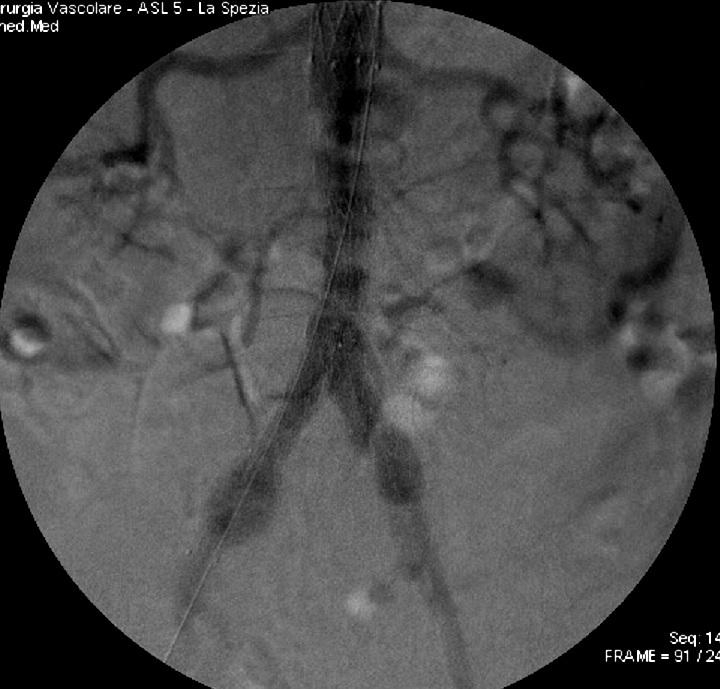