Categories
Area of Interest Abdomen, Paediatric ; Imaging Technique CT, Conventional radiography, Image manipulation / Reconstruction
Procedure Diagnostic procedure, Imaging sequences, Contrast agent-oral, Surgery ; Special Focus Foreign bodies ;
Show more Show less
Download as PDF Print Show related cases Notify admin
Clinical History
A 71-year-old man with Crohn's disease was admitted to the emergency department because of increasing abdominal pain and bowel symptoms as well as a significant weight loss.
8 month prior to admission he underwent a capsule endoscopy. The capsule endoscopy was described as normal.
Imaging Findings
An unenhanced abdominal CT scan showed small-bowel obstruction in the terminal ileum. The ileum and the ascending colon appeared with wall thickening. A high-density object compatible with a foreign body was found in the terminal ileum, at the level of the obstruction. The CT scan also revealed a small amount of free peritoneal air and ascitic fluid. A plain abdominal radiography with per-oral contrast was also made; the outcome of this was obviously consistent with the CT findings.
The patient was referred to an urgent laparotomy. Per-operative findings were a perforated caecum with purulent peritonitis. About 5 cm. from the ileocaecal junction the capsule endoscopy from the examination the patient had undergone 8 month earlier was found in a stenosis. A hemicolectomy was performed and the pathology diagnosis was Crohn's disease.
Discussion
Capsule endoscopy is a suitable imaging modality for evaluating small-bowel disease. The most common indication for its use is occult gastrointestinal bleeding (66%), definite and suspected Crohn's disease (10%) and small bowel neoplasms. Additional 10% are referred to an examination with capsule endoscopy simply because of clinical symptoms such as pain, diarrhoea and weight loss [1].
The contraindications for capsule endoscopy are few and most are relative. The only absolute contraindications are bowel obstruction/pseudo-obstruction and pregnancy [2]. Capsule endoscopy has proved to be a very safe examination method with infrequent outcome of adverse events and complications. Capsule retention is the most significant complication of capsule endoscopy and is usually asymptomatic [1]. The overall incidence of capsule retention is 1-2%, though it varies depending on the indication [3]. Accordingly to the ICCE Consensus for Capsule Retention, capsule retention is defined as a capsule remaining in the digestive tract for a minimum of 2 weeks, unless direct medical, endoscopic or surgical intervention were established [4].
Other complications to capsule endoscopy are perforation (a serious and severe complication but fortunately also very rare), aspiration and small-bowel obstruction. There has been no incident of death reported [1].
In the literature there are reports of capsule retention between 1-7 month and one case of retention in 2.5 years. In all of these cases the capsule passed spontaneously without surgical intervention [5].
In this case the capsule was retained for several months and only recognised when signs of bowel obstruction and perforation emerged. Urgent surgical interference was then required.
In our hospital settings a small-bowel examination with a capsule endoscopy is characterized as complete when the capsule is in the colon. The capsule will then definitely pass. If colon mucosa is not seen in the last pictures send from the capsule endoscopy, further examination with plain radiograph or unenhanced CT scan is required, unless the examinator is certain that the capsule is in the colon anyway. Pictures of faeces indicate that the capsule is in the colon, but apparently can be fake positive as in the case with coprostasis. In this case the examinator did not suspect that the capsule was still in the small-bowell and the examination was characterized as finished without any control.
If a capsule is retained without any symptoms, the capsule is suspected to pass spontaneously. Occasionally plain radiograph or unenhanced CT scan is performed.
Differential Diagnosis List
Small-bowell obstruction secondary to a retained capsule endoscopy.
Intestinal obstruction secondary to neoplasms
Gallstone ileus
Final Diagnosis
Small-bowell obstruction secondary to a retained capsule endoscopy.
References 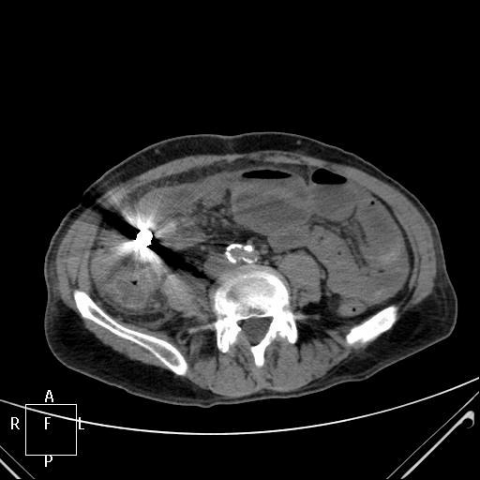 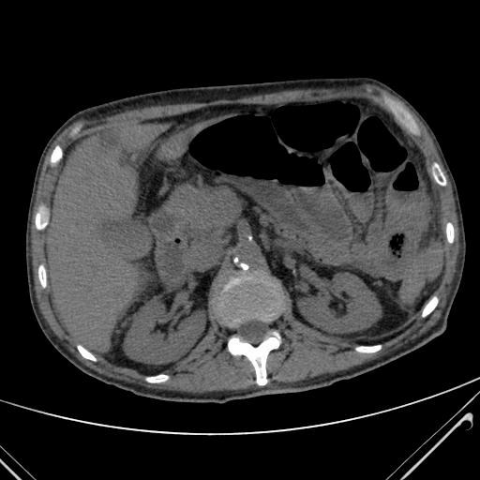 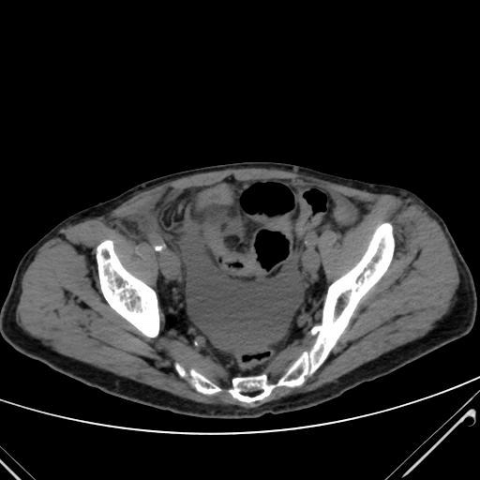 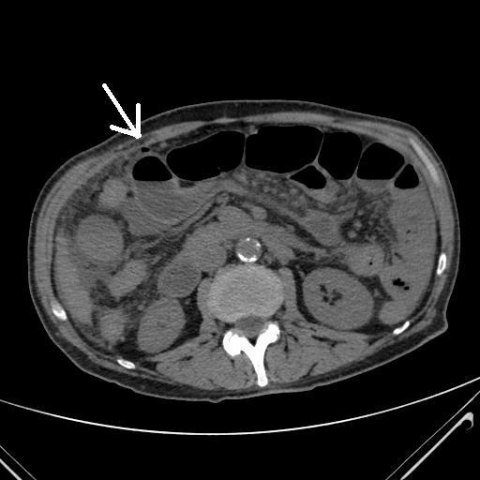 Axial (unenhanced) abdominal CT image shows free air in the anterior right side of the abdomen (indicated with an arrow) besides a small amount of free fluid.
Figure 2 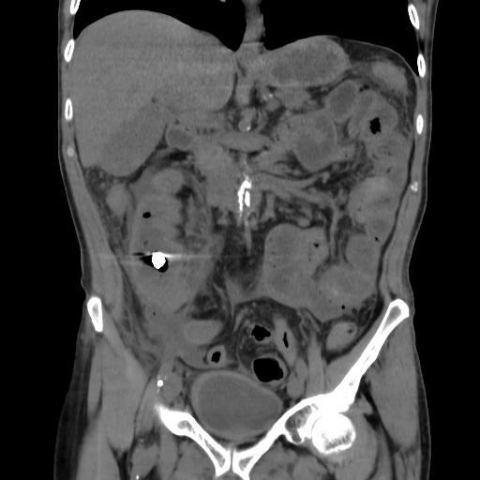 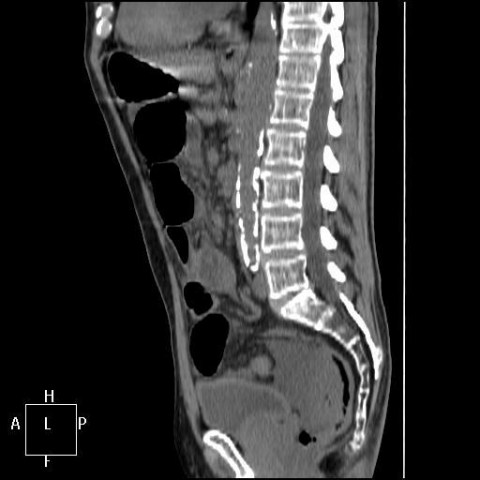 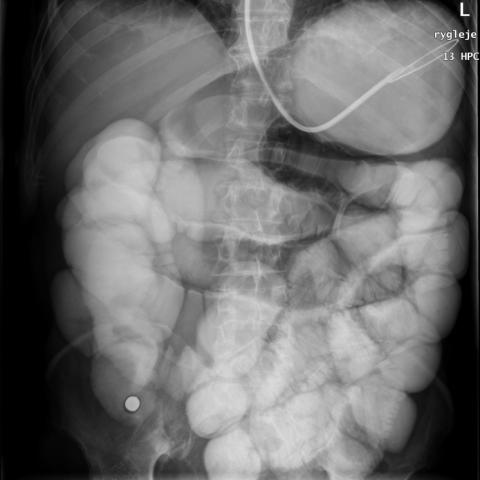 Abdominal radiography (suspine position) shows dilation of the small-bowel loops until the right lower region, where the capsule endoscopy is seen. 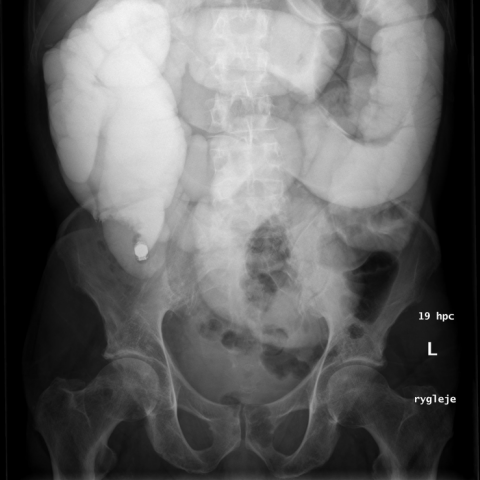 Abdominal radiography (suspine position) shows dilation of the small-bowel loops until the right lower region, where the capsule endoscopy is seen.
Figure 4 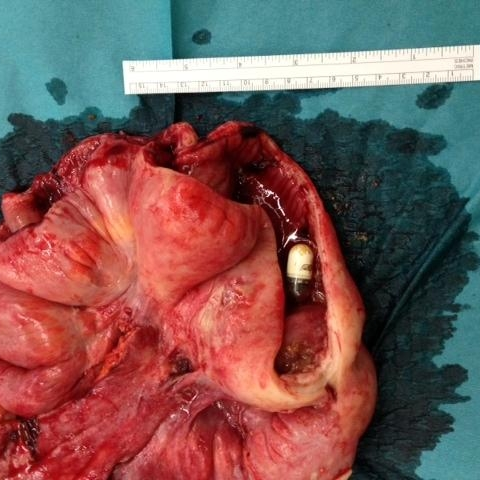 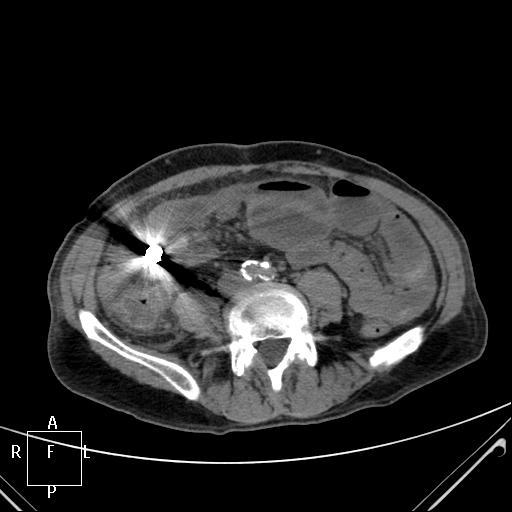 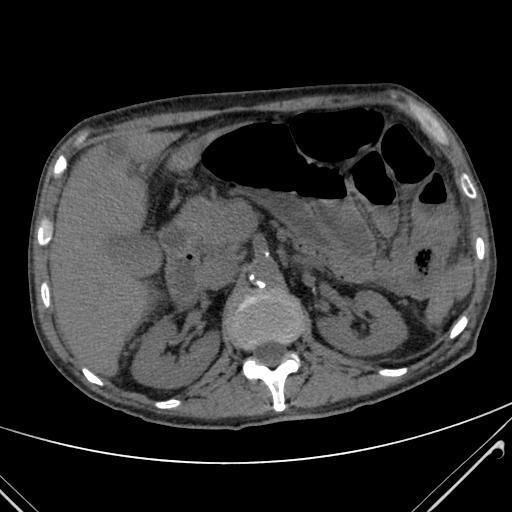 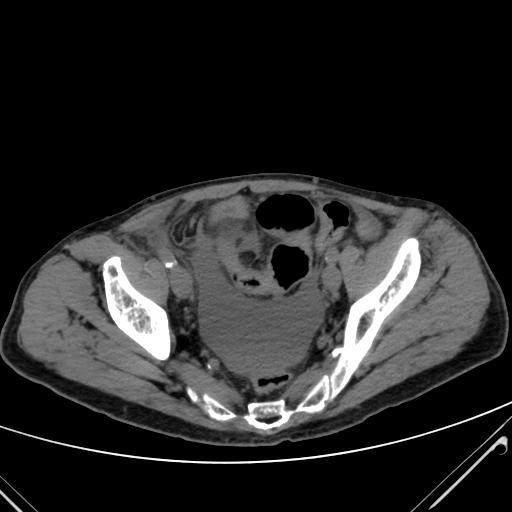 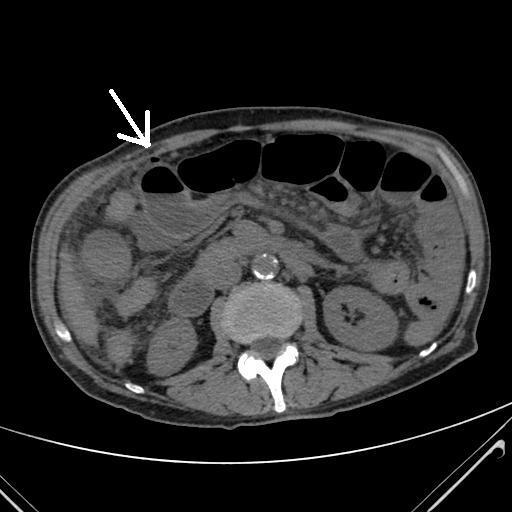 Axial (unenhanced) abdominal CT image shows free air in the anterior right side of the abdomen (indicated with an arrow) besides a small amount of free fluid.
Department of Radiology, Herlev University Hospital Copenhagen, Denmark 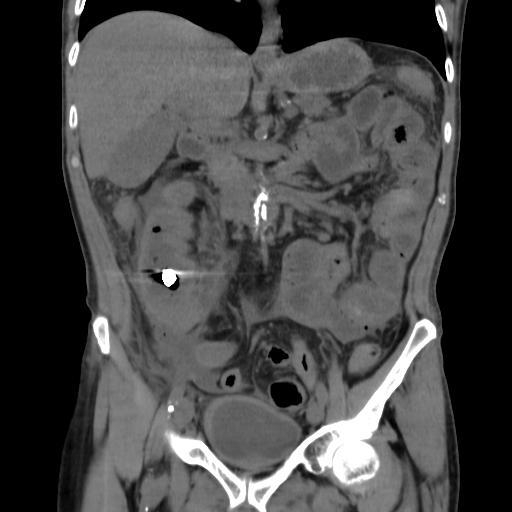 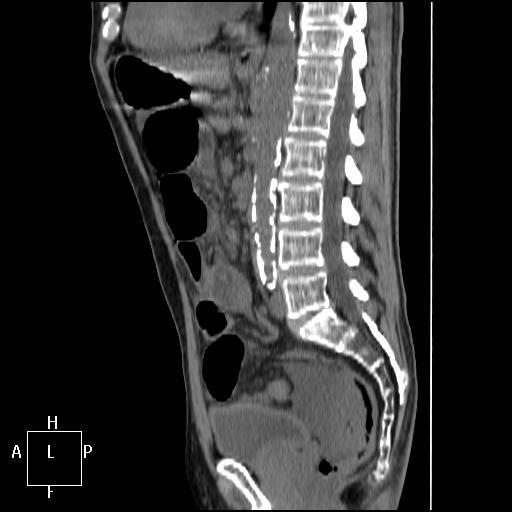 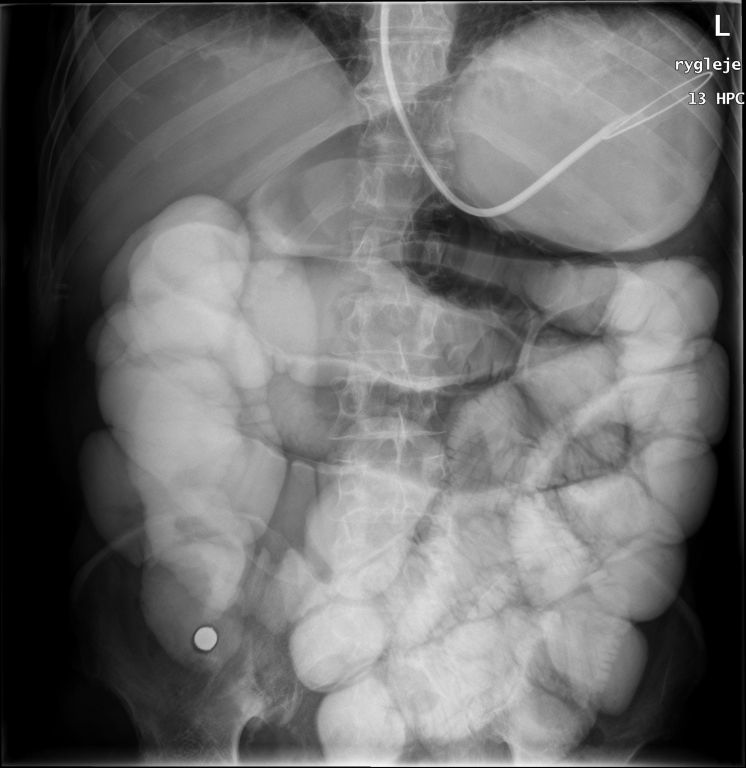 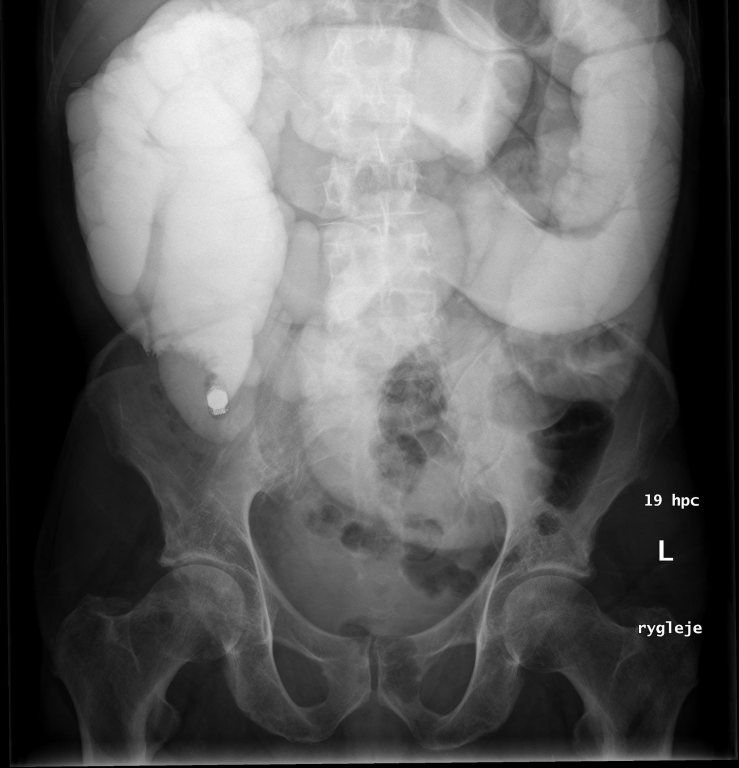 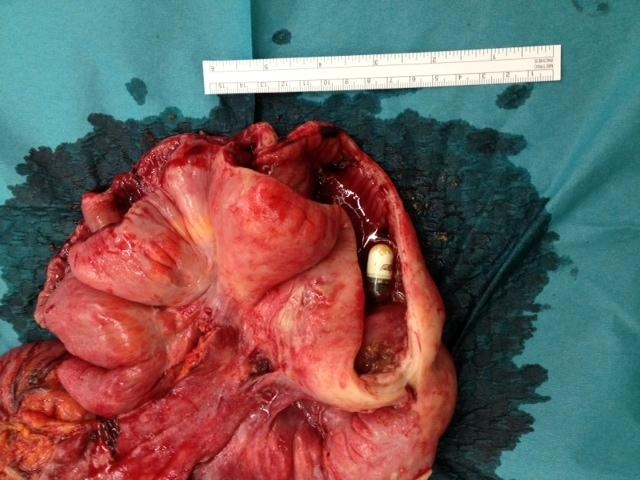