Categories
Area of Interest Genital / Reproductive system female, Abdomen ; Imaging Technique CT, Absorptiometry / Bone densiometry, MR
Procedure Diagnostic procedure ; Special Focus Neoplasia, Abscess ;
Show more Show less
Download as PDF Print Show related cases Notify admin
Clinical History
A 68-year-old woman was referred to our hospital to charaterize a pelvic mass, an incidental finding on a routine ultrasound. A computed tomography (CT) and a magnetic resonance imaging (MRI) were performed. She was asymptomatic and laboratory analysis was unremarkable.
Imaging Findings
Contrast-enhanced CT (CECT) shows a well-defined, predominantly solid and heterogeneous pelvic mass, with mild contrast enhancement (Fig. 1).
Following the left ovarian vein to the level of the suspensory ligament, as it approaches the mass, shows "the ovarian suspensory ligament sign", confirming the left ovarian origin (Fig. 1a). There is no attachment between the lesion and uterus (Fig. 1c), and subphrenic ascites coexists (Figs. 1d).
Pelvic MRI shows a predominantly solid tumour of the left ovary with smooth contours, demonstrating low-signal intensity on T1-weighted images (WI) (Fig. 2a) and heterogeneous, predominantly low-signal intensity on T2WI (Figs. 2b-d). The remnant high signal intensity areas seen on T2WI are consistent with cystic areas, which are isointense to a small amount of peritoneal fluid that is depicted in the pelvic cavity (Figs. 2c-d).
After paramagnetic contrast administration it has only mild, diffuse and slight heterogeneous enhancement (less than myometrium) (Figs. 2e-f).
Discussion
Ovarian fibrothecomas are benign tumours arising from the stromal component of the ovary [1-3]. According to the World Health Organization classification they represent a subgroup of the granulosa-theca cell tumours, belonging to the thecoma-fibroma group.
Histologically, fibrothecomas differ slightly from fibromas, demonstrating theca-like cells [1, 4].
These tumours are usually asymptomatic. They are often an unexpected finding on imaging performed for another reason. Symptoms related to pleural effusion or peritoneal fluid (Meigs' syndrome) may occur [1, 3].
In all cases, it is fundamental to differentiate fibrothecoma from a malignant tumour and imaging plays an important role.
On ultrasound, fibrothecoma appears as a primarily hypoechoic ovarian mass with posterior wall attenuation [2]. Most tumours are solid, with smooth contours, but some of them demonstrate cystic areas [1, 2]. Colour Doppler findings are variable, although most fibrothecomas show minimal to moderate vascularization.
A fibrothecoma with atypical appearance may be mistaken for a malignancy, particularly if associated with high colour content on Doppler evaluation, with ascites or raised CA 125 levels, and further evaluation is needed [2-4].
On sectional imaging, knowledge of the morphologic features and ligamentous attachments of the ovaries (particularly the suspensory ligament), the relationship of the ovary to the ureter, and the course of the ovarian vein and artery is fundamental not only for confident identification of the laterality of the lesion, but also to differentiate ovarian from non-ovarian masses [3, 5].
On CECT fibrothecomas are described as well-defined, solid, homogeneous or slightly heterogeneous lesions, with delayed contrast enhancement [2, 5].
On MRI, because of their high content in collagen, fibrothecomas have low-signal intensity on T1WI and very low-signal on T2WI, characteristics that display a relatively specific appearance [3-4].
Therefore, after analysing the relationship of the mass with ovaries and other anatomic pelvic structures, if an ovarian origin is proven and the lesion demonstrates the described signal intensity, a fibrothecoma is likely.
Nevertheless, when the diagnosis of a fibrothecoma is likely, it is important to know that the prognosis is extremely good. They are almost always benign and elective surgical resection is sufficient. Even in cases associated with ascites (Meigs' syndrome), fluid collections usually regress following surgical removal of the tumour [3, 4].
Knowledge of the anatomic relationships and of the key features of ovarian tumours, particularly of fibrothecomas, will provide the criteria for making a specific diagnosis or substantially narrowing the differential diagnosis, preventing unnecessary therapies.
Differential Diagnosis List
Fibrothecoma of the ovary
Fibroma of the ovary
Pedunculated leiomyoma
Broad ligament leiomyoma
Final Diagnosis
Fibrothecoma of the ovary
References 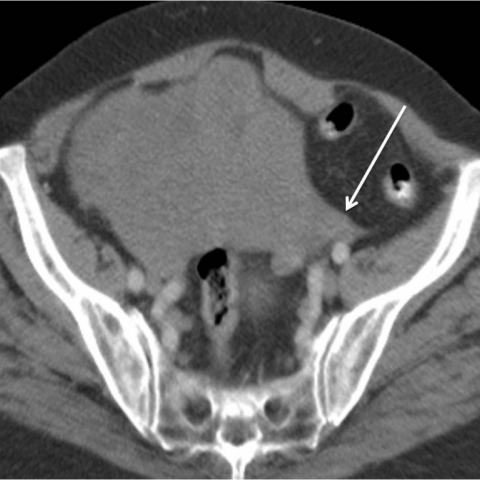 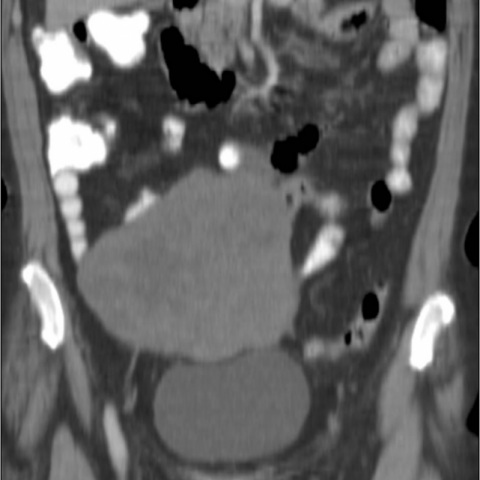 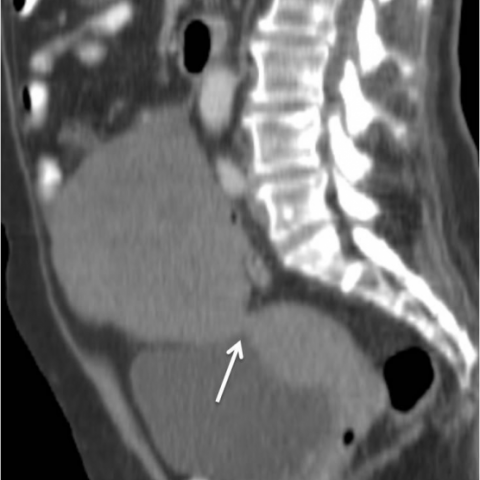 Sagittal CECT image shows the left ovarian mass extending cranially until the level of L4 vertebra. Note that there is no attachment between the lesion and the uterine fundus (white arrow). 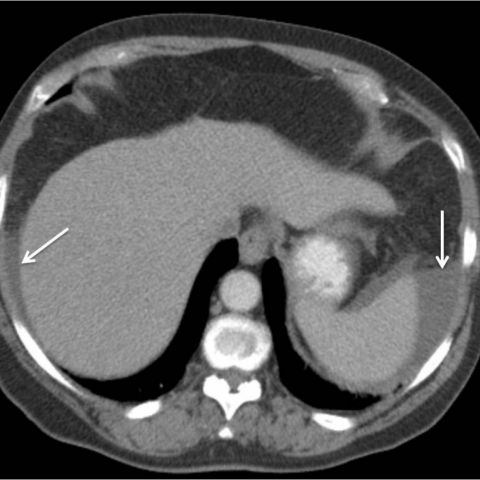 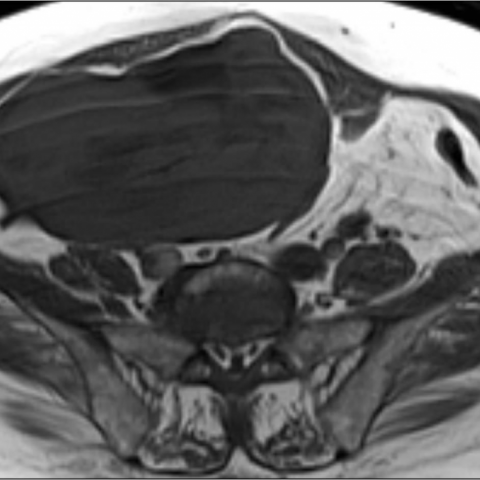 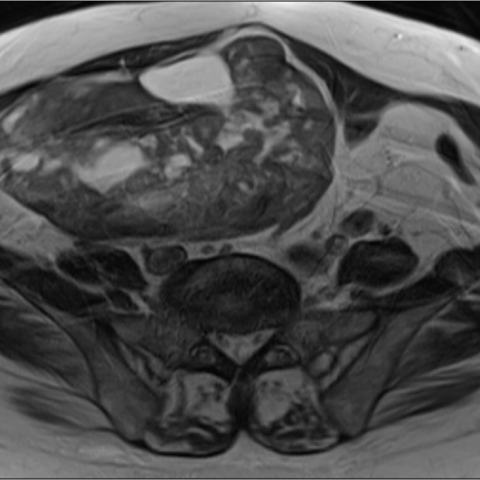 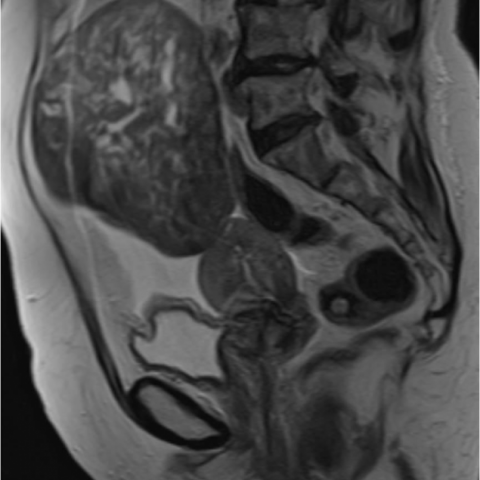 Sagittal T2WI shows a heterogeneous, predominantly hypointense left ovarian mass, that extends until the level of L4 vertebra. Note the small amount of peritoneal fluid seen in the pelvic cavity. 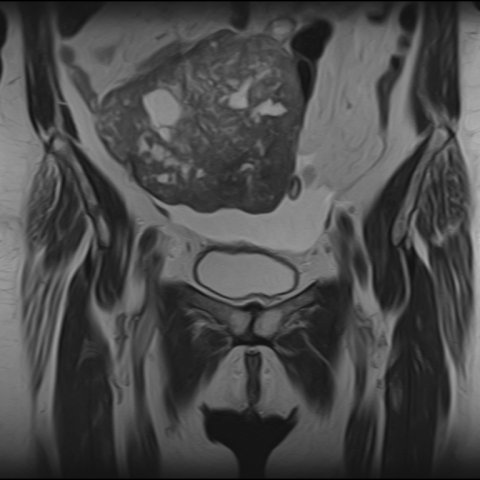 Coronal T2WI shows a heterogeneous, predominantly hypointense left ovarian mass. The hyperintense components are consistent with cystic areas, that are isointense to peritoneal fluid seen in the pelvic cavity. 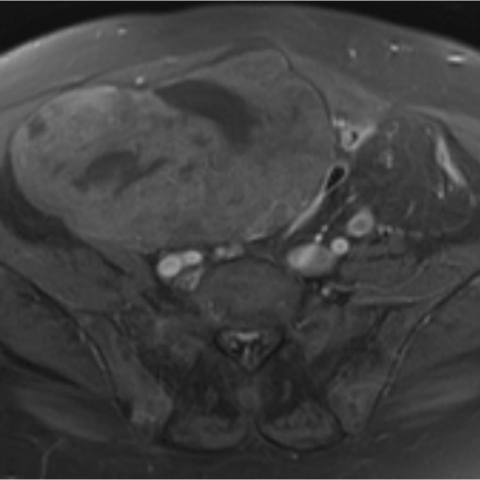 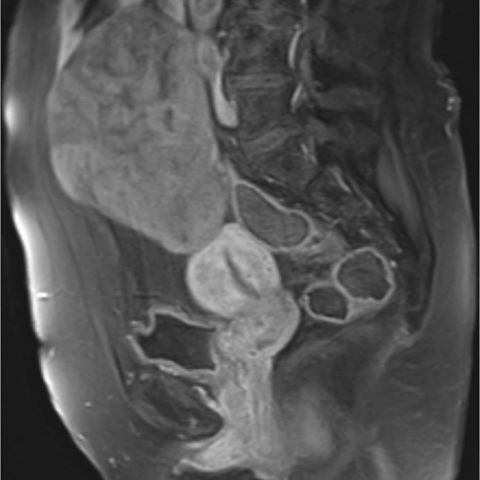 Sagittal fat-supressed gadolinium-enhanced T1WI shows mild enhancement of the left ovarian mass (less than myometrium). Note that there is no attachment between the lesion and the uterine fundus. 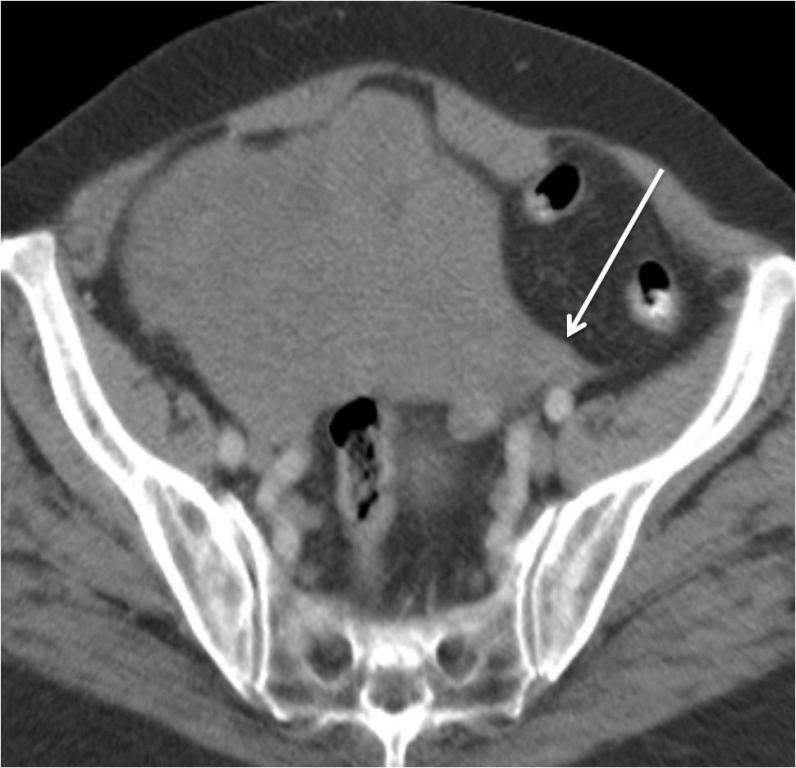 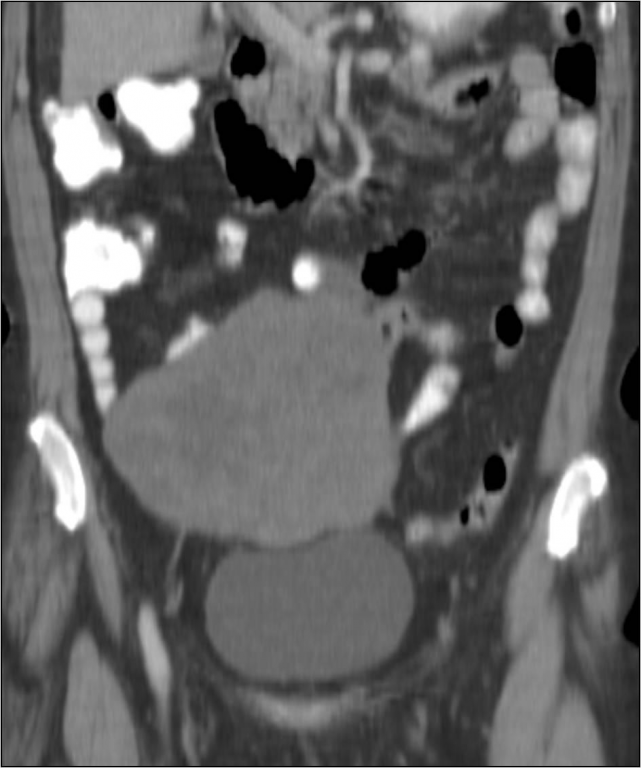 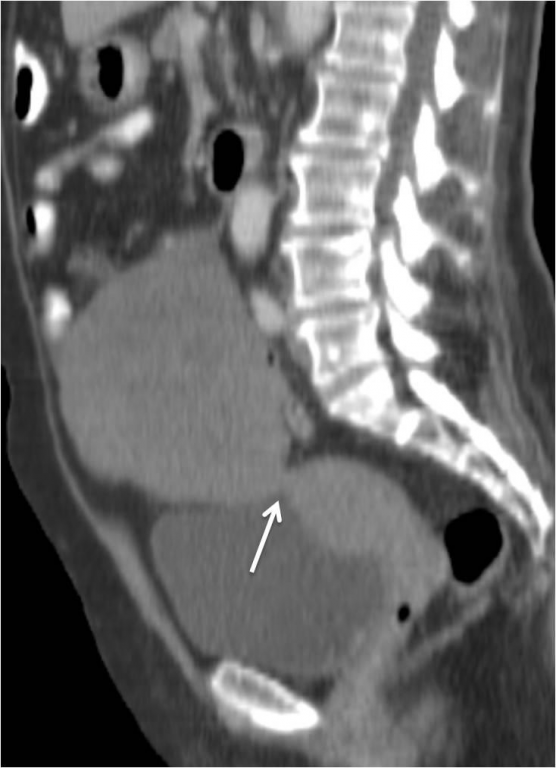 Sagittal CECT image shows the left ovarian mass extending cranially until the level of L4 vertebra. Note that there is no attachment between the lesion and the uterine fundus (white arrow).
Cunha TM, Department of Radiology, IPOLFG, Lisbon, Portugal 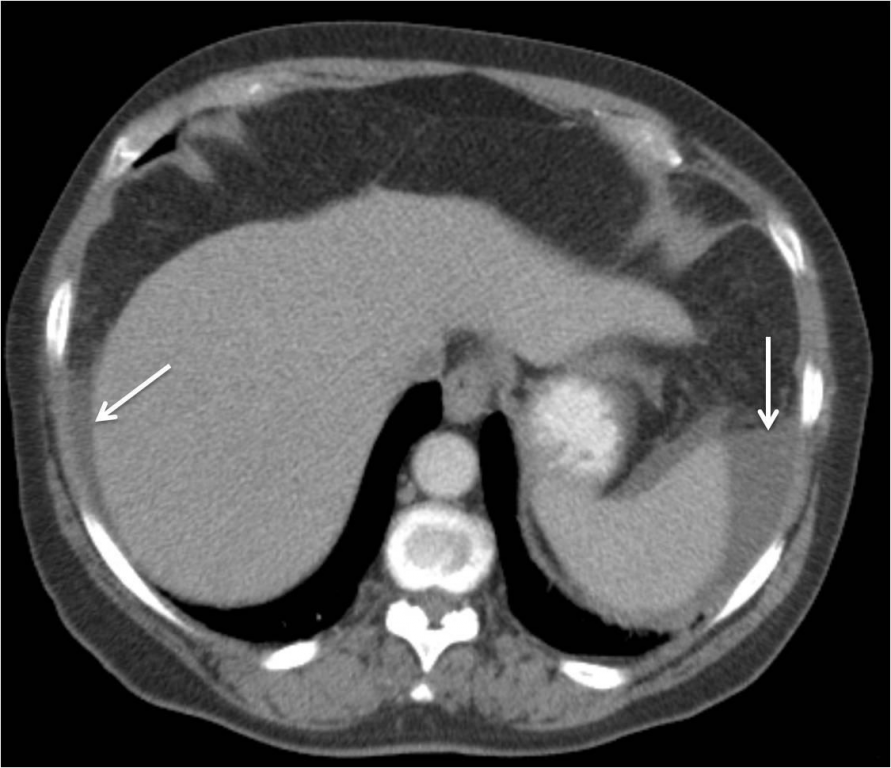 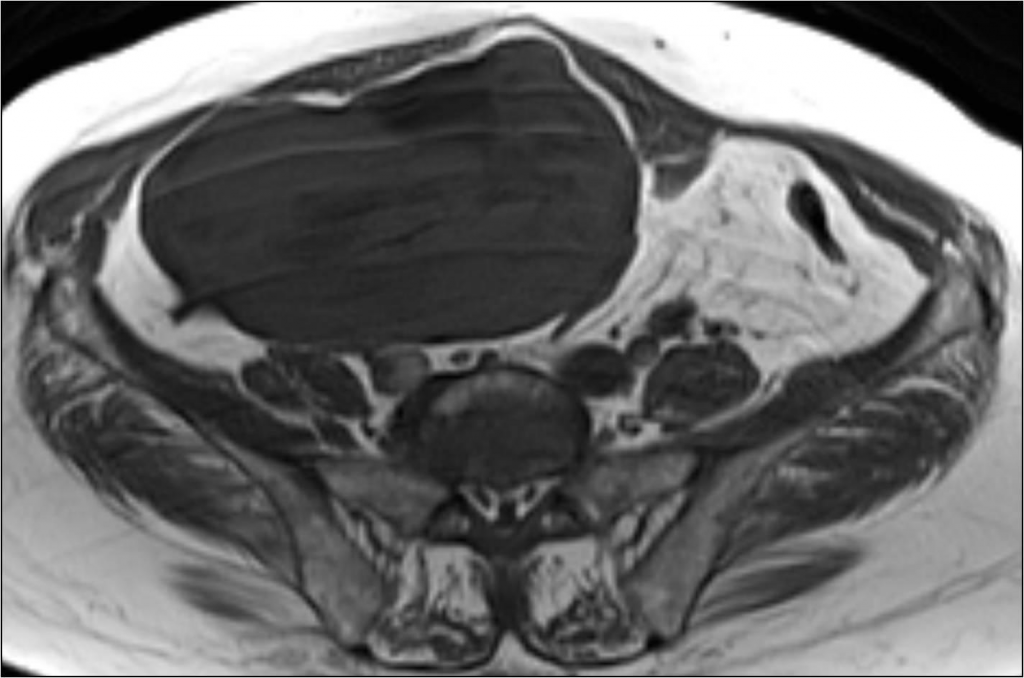 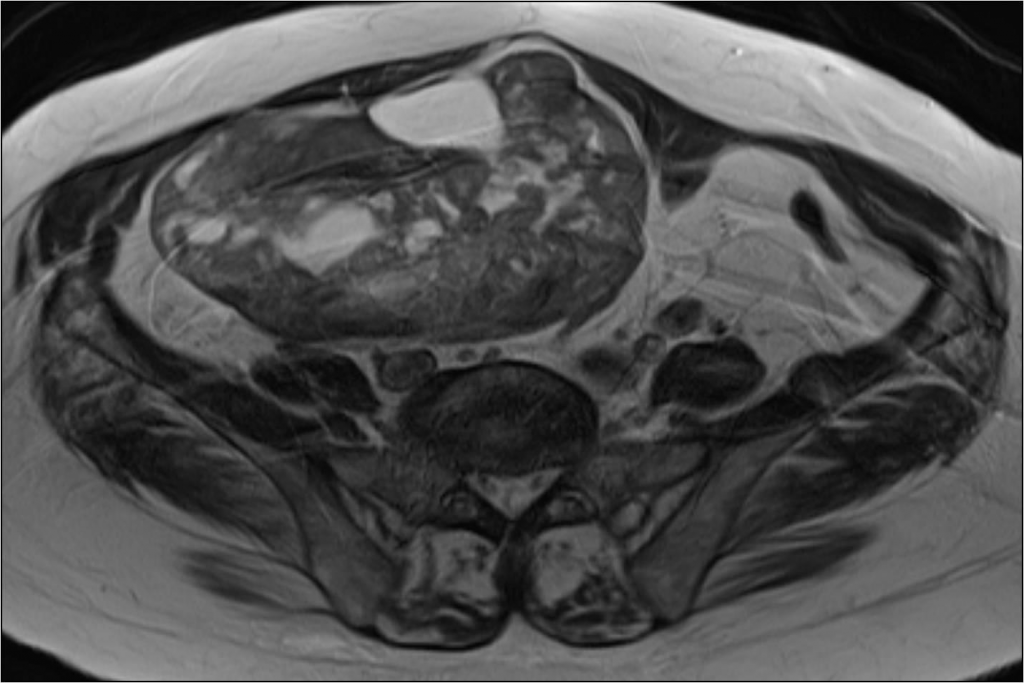 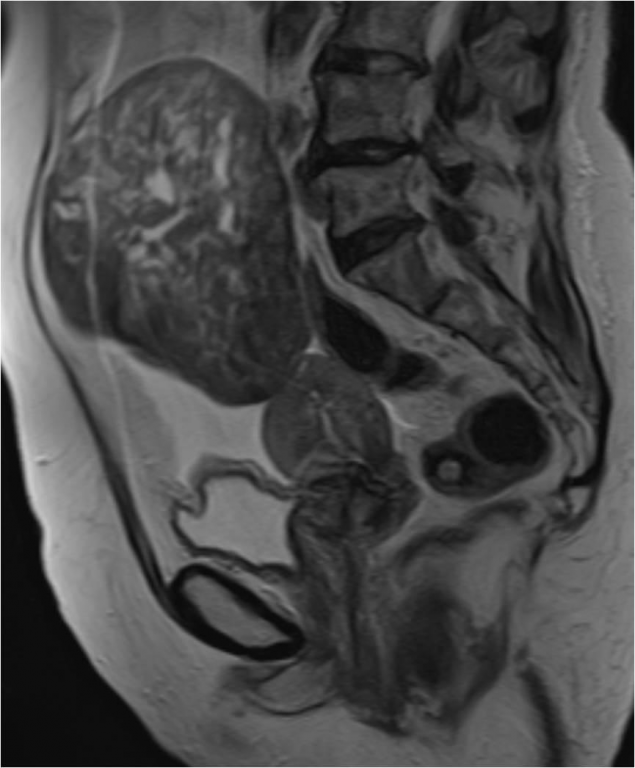 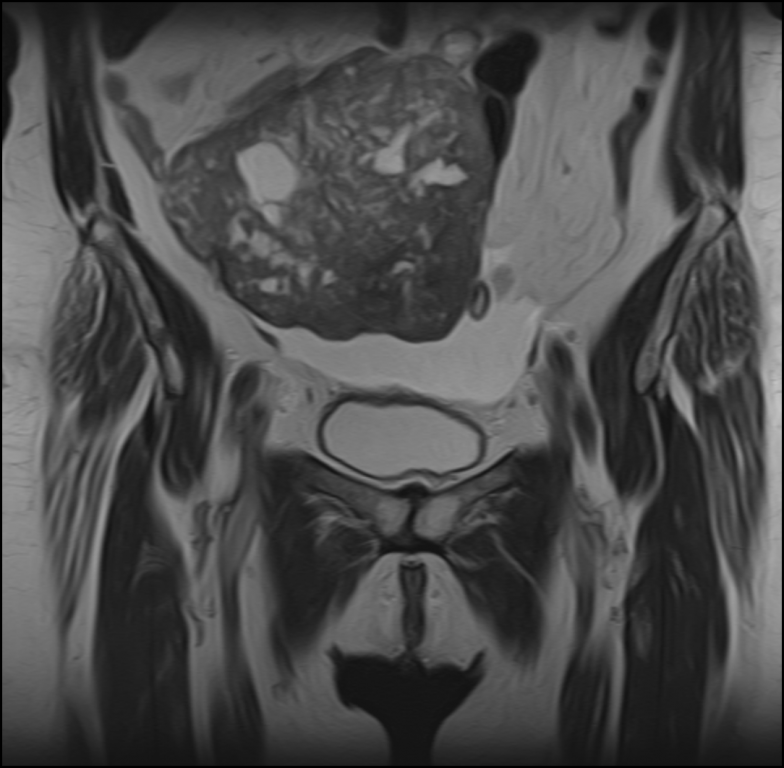 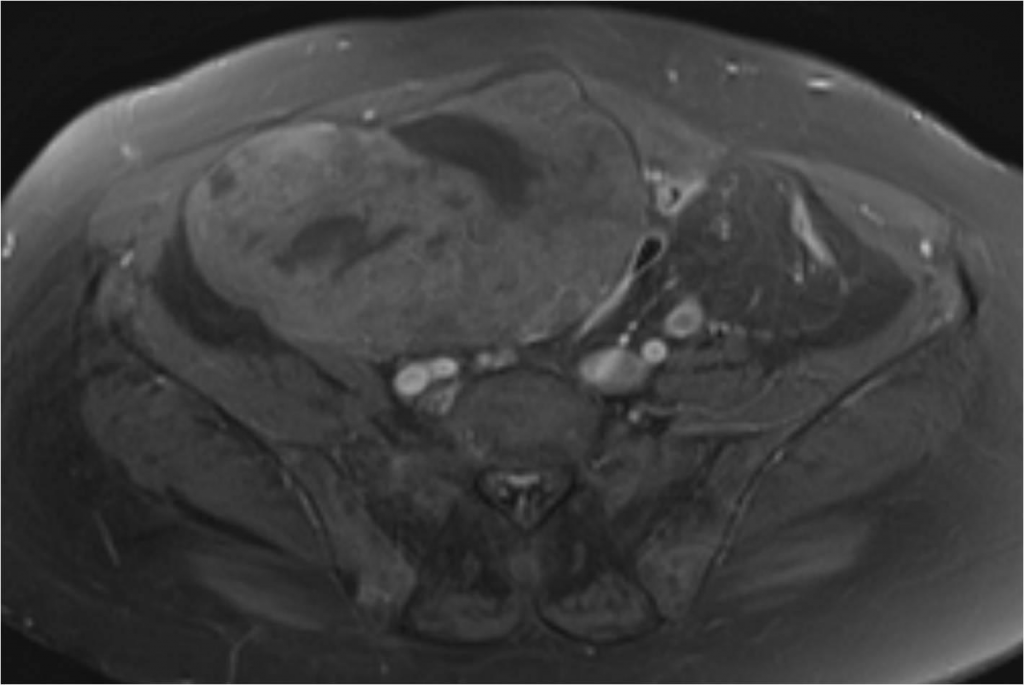 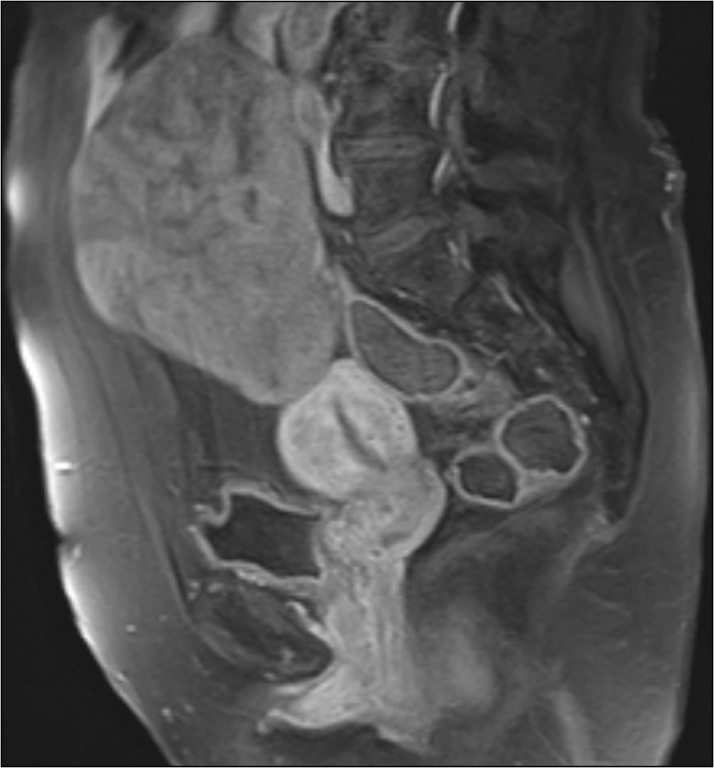 Sagittal fat-supressed gadolinium-enhanced T1WI shows mild enhancement of the left ovarian mass (less than myometrium). Note that there is no attachment between the lesion and the uterine fundus.
Cunha TM, Department of Radiology, IPOLFG, Lisbon, Portugal