Categories
Area of Interest Cardiovascular system, Arteries / Aorta, Haematologic ; Imaging Technique Digital radiography, CT-Angiography, Image manipulation / Reconstruction, MR
Procedure Diagnostic procedure, Computer Applications-Detection, diagnosis, Intraoperative ; Special Focus Aneurysms, Embolism / Thrombosis ;
Show more Show less
Download as PDF Print Show related cases Notify admin
Clinical History
Multiparous lady presented with back pain for 2 years on and off, worsening in the past 6 month. Pain was radiating to the left shoulder and nape of neck. She complained of headache, giddiness, chest discomfort. No history of fever, injury, cannulation, or inflammation. She had no vascular risk factors such as diabetes mellitus, hypertension, hyperlipidaemia or nicotinism.
Imaging Findings
Plain X-ray showed left upper zone opacity silhouetting the aortic shadow, Multislice CT aortogram confirmed a large partially thrombosed saccular aneurysm of 7.5 x 6cm in the first part of subclavian artery and origin of left vertebral artery. The second part of left SCA was severely compressed and complete absence of flow was noted in the distal portion. Collateral flow noted in the third portion of the left SCA. Reformation of the left axillary artery, brachial artery and subsequent branches were noted. Normal flow was seen in foraminal course of left vertebral artery. Aneurysm was seen slightly displacing the trachea to the right and slightly compressing the arch. Contrast enhanced MR aortography also confirmed the above findings. Left dome of diaphragm was elevated due to the pressure effect of the aneurysm on the phrenic nerve.
Discussion
Isolated subclavian artery aneurysms are the rarest of all peripheral aneurysm, Dent et al reported that the incidence was only 2 (0.13%) among 1, 488 cases of aneurysm [1]. Lawrence et al. reported 257 (0.5%) cases among 51, 949 cases of aneurysm [2]. Most aneurysms are caused by blunt or penetrating trauma or by thoracic outlet syndrome, in the latter condition, post stenotic dilatation is often observed in patient with the cervical rib. Other less common causes are syphilis, cystic medial necrosis, congenital defects and invasion from tuberculous lymphadenitis. It may present as a late complication of Blalock-Taussig anastomosis.
With aneurysms arising from one side, it is always necessary to exclude involvement of the other side and above all, other associated aneurysms as these appear in more than 30% of patients. Right-sided aneurysm is more common than left-sided [3]. False aneurysm is more common than true aneurysm. True aneurysm of the distal part of the subclavian artery is mostly a poststenotic one belonging to TOS, but the incidence is very rare. Purely atherosclerotic aneurysm is localised most frequently in the proximal part of the subclavian artery, just as are aneurysms related to the cystic medial necrosis, marfan syndrome, mycotic aneurysm, and aneurysms of genetic syndromes (Turner's syndrome). The aneurysm of the proximal part of the subclavian artey is symptomless for a long time, it presents only with undetermined discomfort in the neck and in the shoulder region, rarely dysphagia or dyspnoea. Peripheral embolism of the upper limb is the most frequent clinical manifestation of the subclavian artery. It can manifest as an acute peripheral ischaemia or microembolisms manifesting as Raynaud's syndrome. Signs of embolisation include small painful punctile lesions affecting mostly fingers and the palm of the hand. When the aneurysm is situated centrally, vertebral artery embolisms can occur. Thrombotic occlusion and rupture are rare, but a rupture of an aneurysm in the bronchus with haemoptysis was described above.
Isolated aneurysms of non-aberrant subclavian artery are the rarest of all peripheral aneurysms. All aneurysms grow and over time they become more complicated. An asymptomatic aneurysm, containing a mural thrombus with high risk of embolism, as in our case, is an unambiguous indication for operation. A surgical partial resection and revascularisation using an artificial vascular prosthesis interposition is the method of choice.
Differential Diagnosis List
Atheromatous aneurysm with partial left subclavian artery involvement.
Post stenotic aneurysm related to TOS
Mediastinal mass
Post-traumatic aneurysm rare
Final Diagnosis
Atheromatous aneurysm with partial left subclavian artery involvement.
References 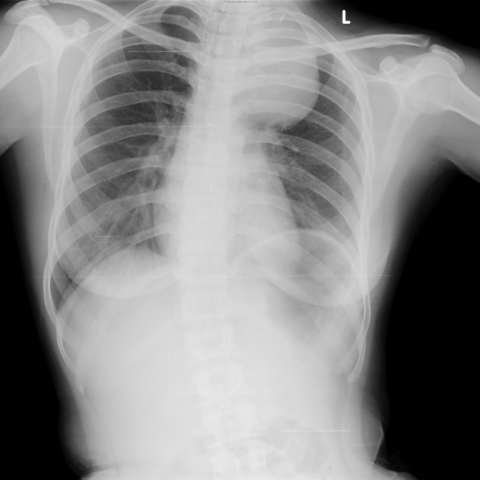 Chest X-ray showing a large well-defined opacity in left upper zone, and shifting of the trachea to a contralateral side. Elevation of left hemidiaphragm is also noted.
Figure 2 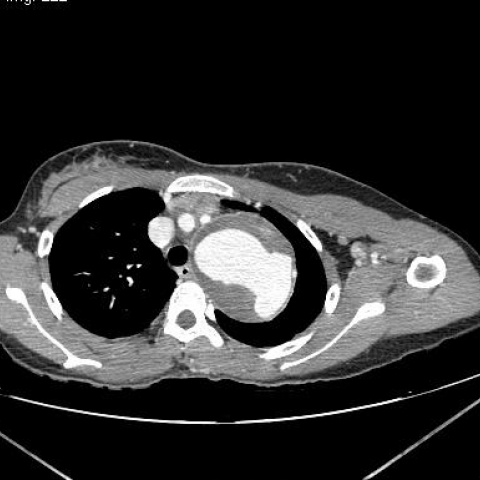 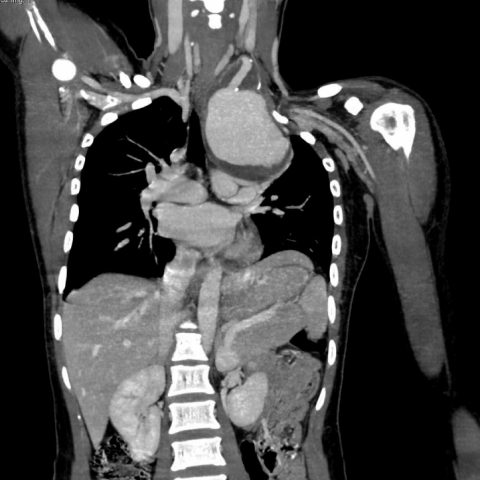 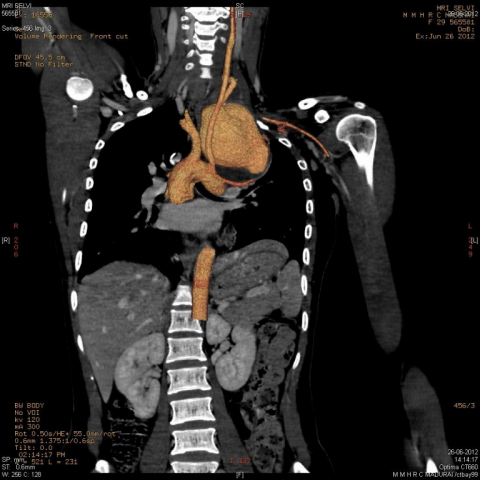 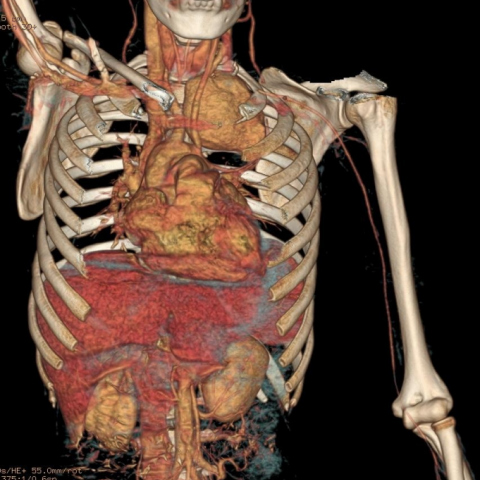 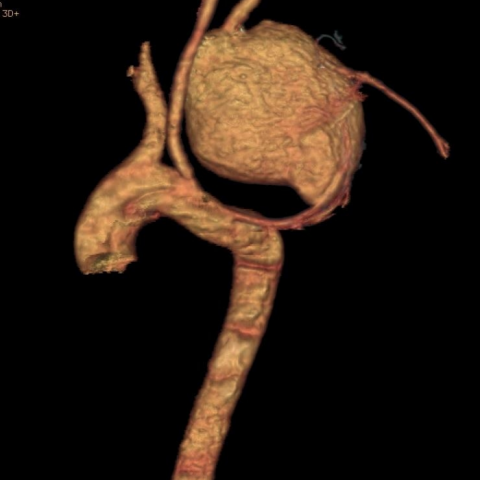 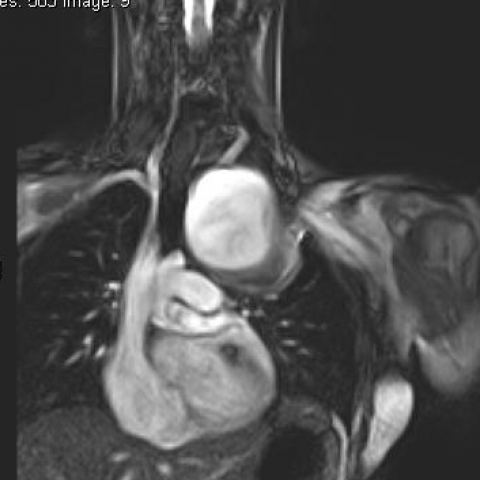 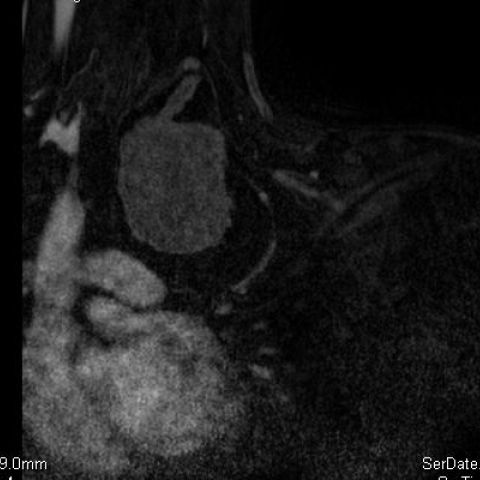 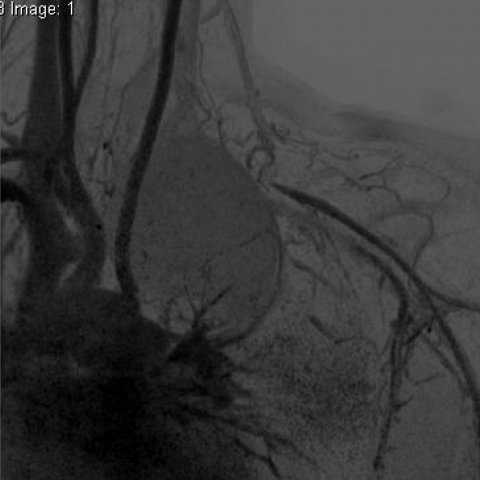 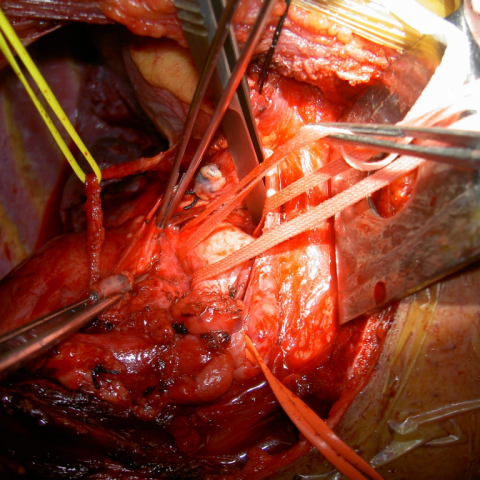 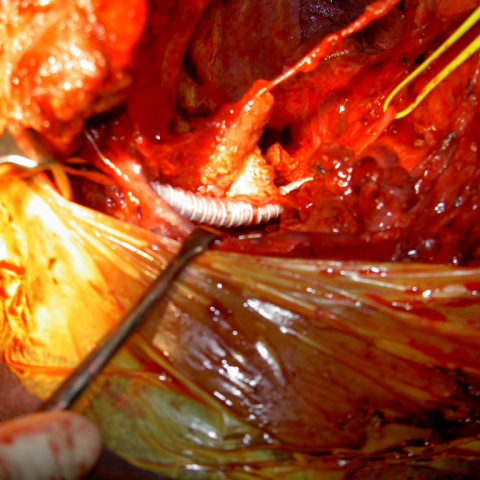 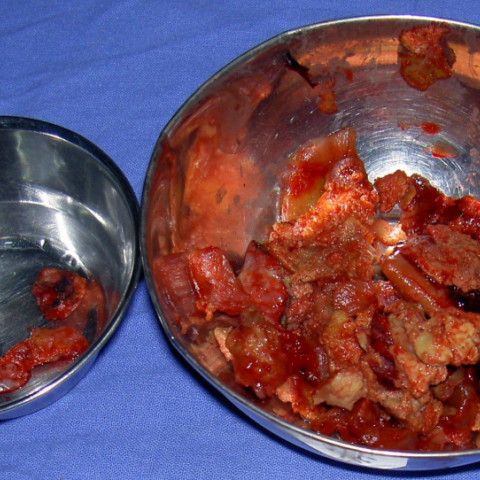 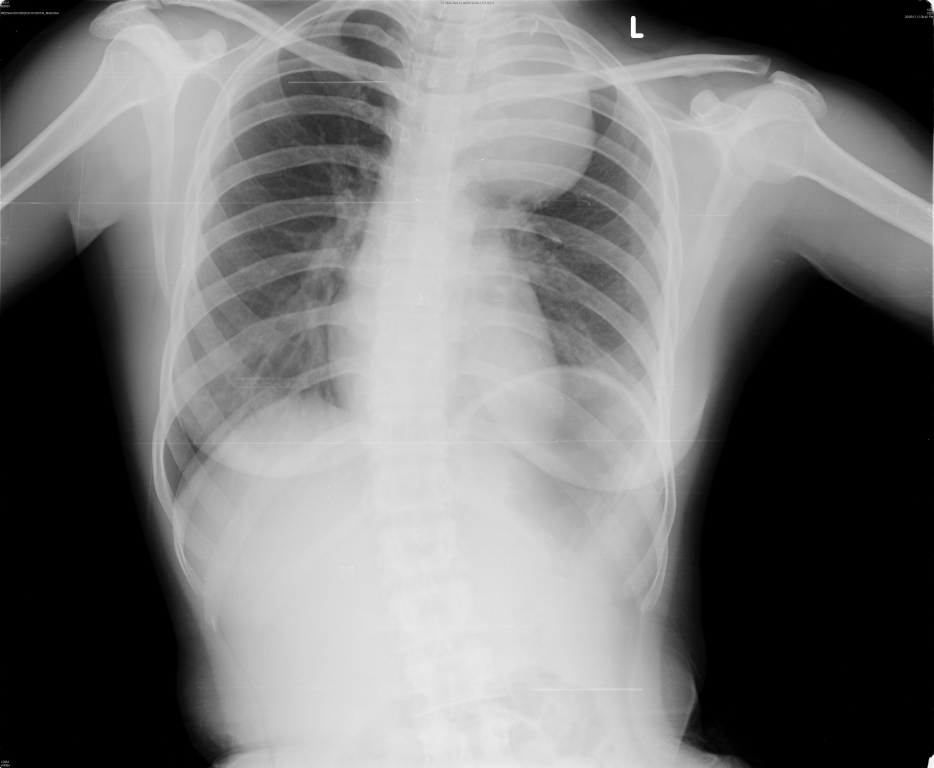 Chest X-ray showing a large well-defined opacity in left upper zone, and shifting of the trachea to a contralateral side. Elevation of left hemidiaphragm is also noted.
Saket B, N Karunakaran, Department of Imaging sciences and Interventional Radiology, MMHRC, Madurai, India. 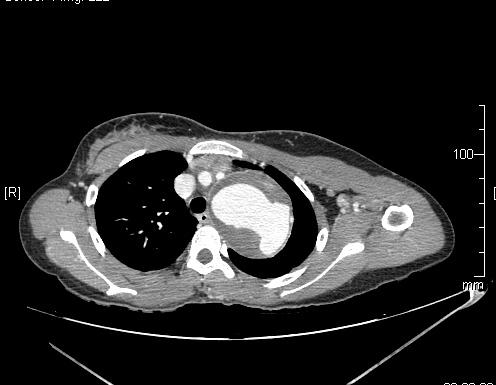 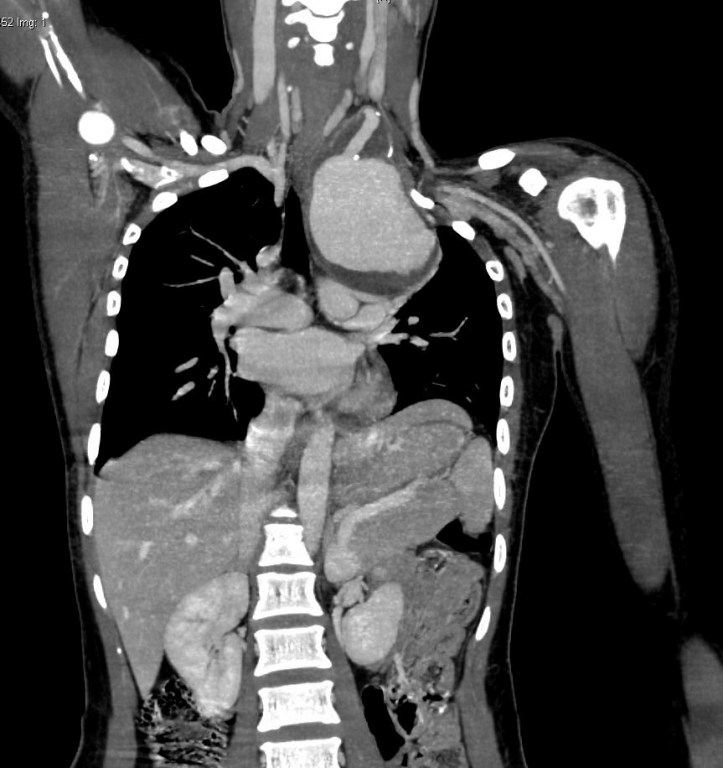 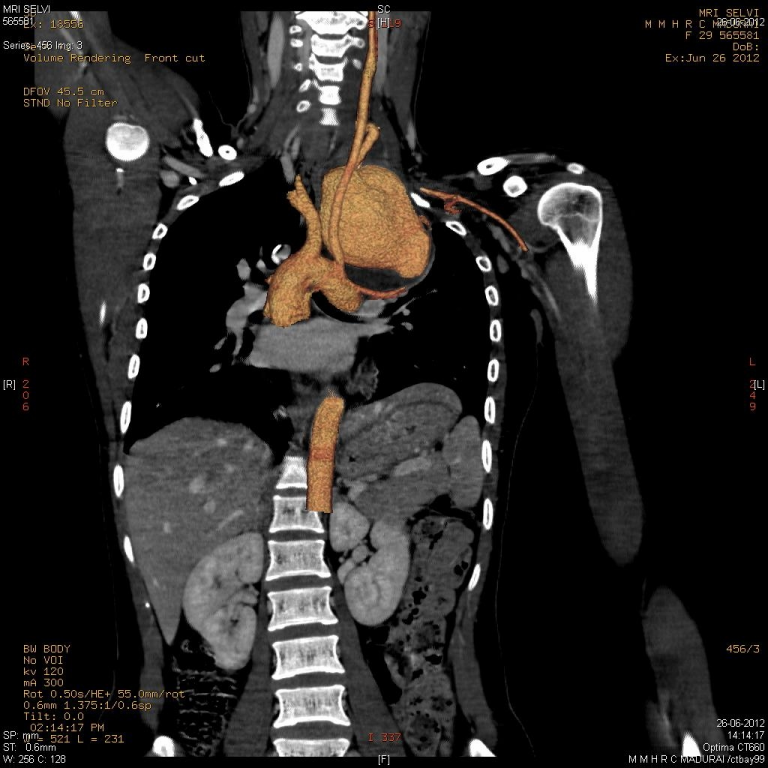 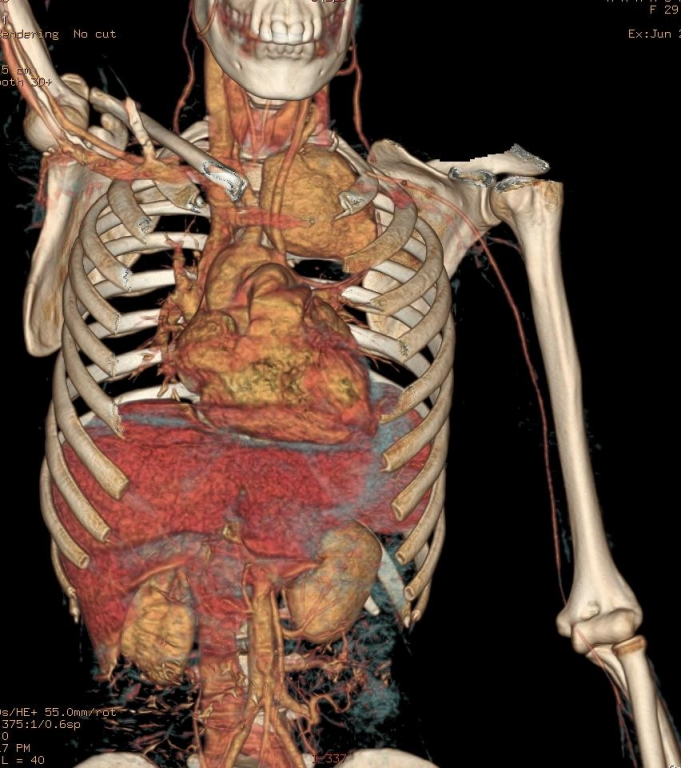 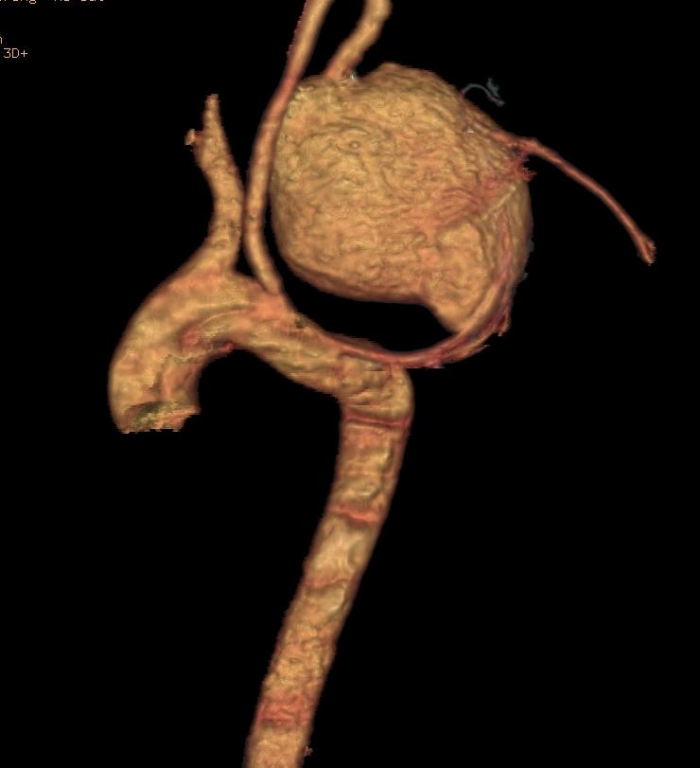 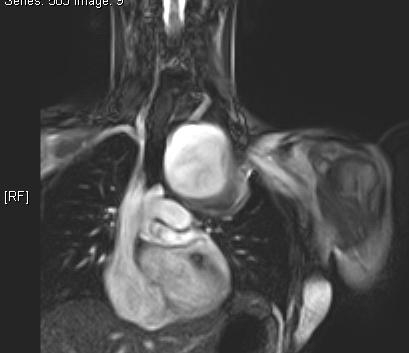 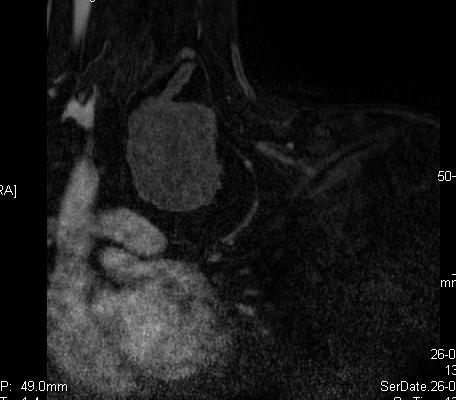 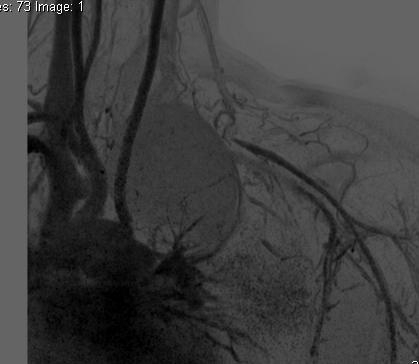 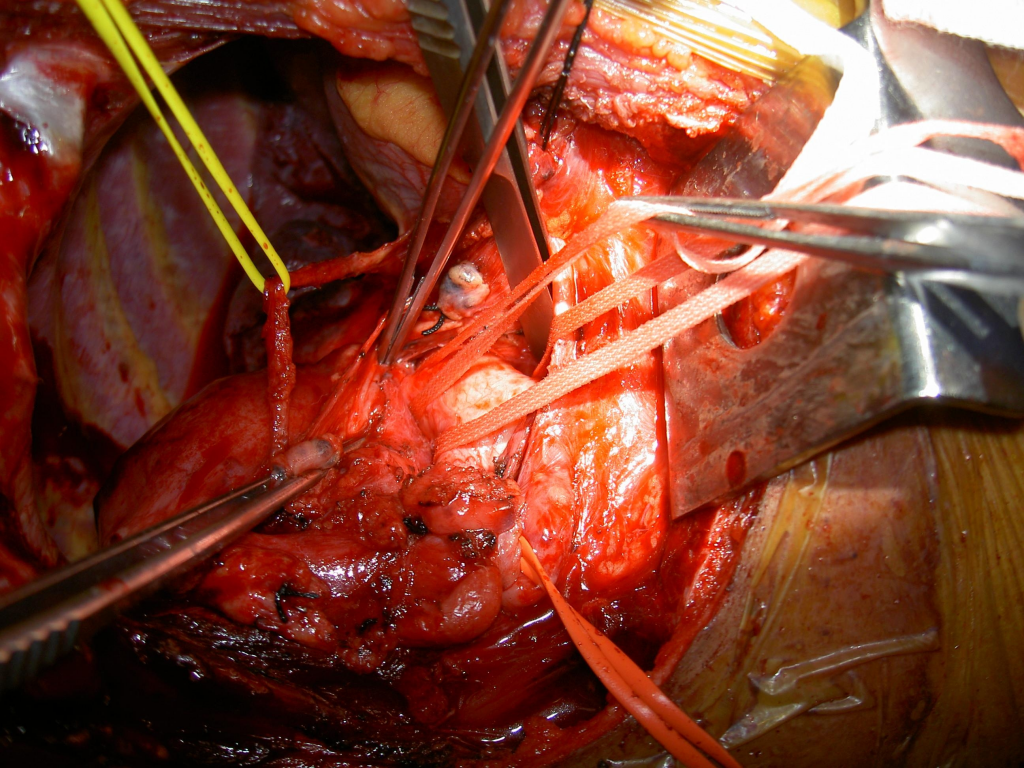 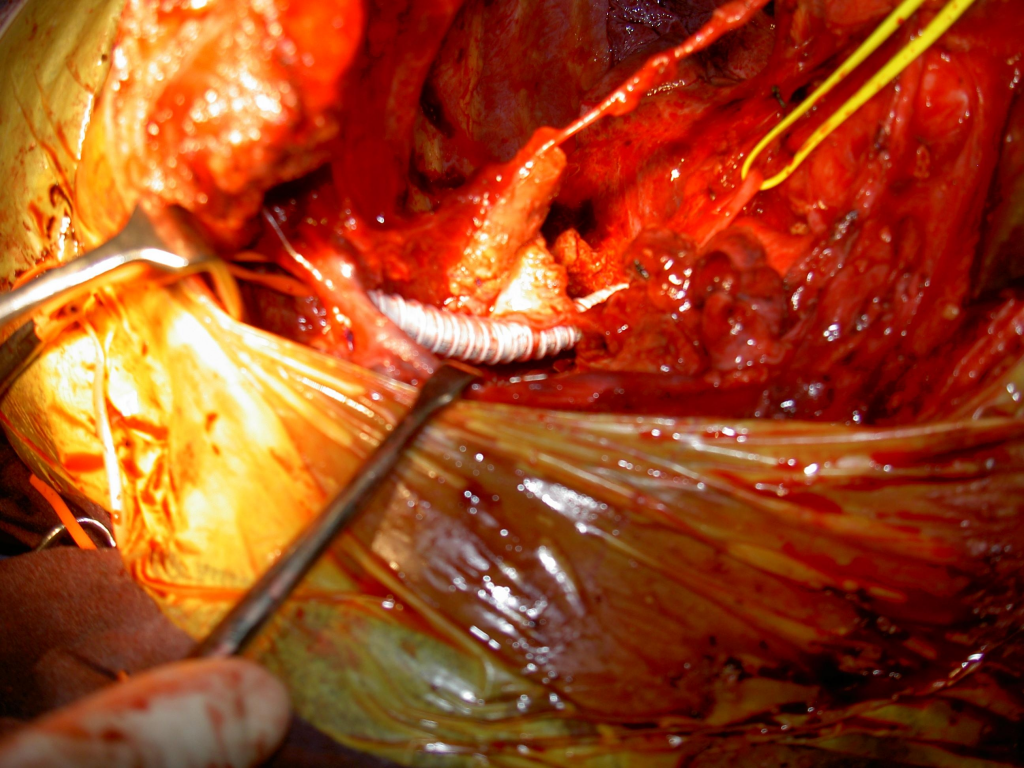 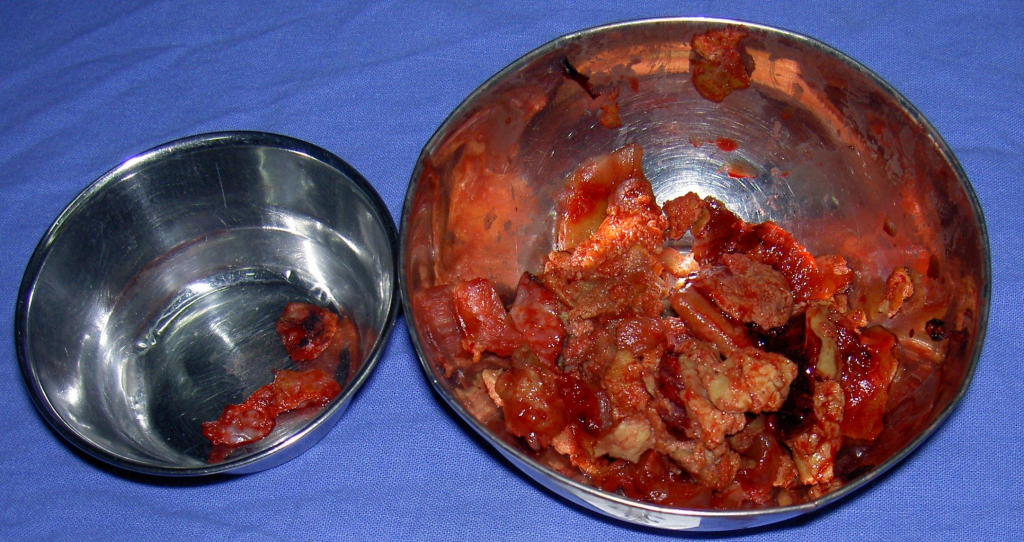