Categories
Area of Interest Musculoskeletal system ; Imaging Technique CT, MR, Conventional radiography
Procedure Diagnostic procedure ; Special Focus Metabolic disorders, Neoplasia ;
Show more Show less
Download as PDF Print Show related cases Notify admin
Clinical History
A 36-year-old patient with bilateral congenital renal dysplasia, currently on dialysis and on a waiting list for a kidney transplant presented to our institution as part of an assessment of a bacterial peritonitis secondary to peritoneal dialysis.
Imaging Findings
CT and conventional images showed multiple sclerotic, slightly heterogeneous lesions of the T9 vertebral body, pelvis and left femoral head, and one mixed lytic and sclerotic lesion of the left pubic body, that were not present on previous X-rays. In view of these newly formed lesions, bone metastases could be seen as a possible diagnosis; however, given the patient’s history of kidney transplant failure and his biological profile suggesting secondary hyperparathyroidism, brown tumours were the primary diagnosis. On MRI, the lesions were hypo-intense on all sequences (T2, T1, and STIR) except for the mixed lytic and sclerotic lesion of the left pubic body, which presented a heterogeneous increased signal intensity on T2 and STIR weighted images. Follow-up CT five months later showed absolute stability of all sclerotic lesions and sclerotic transformation of the mixed lesion of the left pubic body, solidifying the hypothesis of brown tumours in regression.
Discussion
The brown tumour is not an actual tumour but represents fibroblastic tissue containing numerous osteoclast-like giant cells. It can be seen at any age, in primary as well as secondary hyperparathyroidism. In chronic renal failure, excessive calcium urinary excretion leads to parathormone activation which in turn mobilises osteoclastic turnover of bone, with particularly rapid bone loss in some regions, which results in replacement of the bone marrow by reparative granulation tissue and vascular, fibrous tissue. The brown tumour lesions take their name from the presence of intra-lesional haemorrhagic elements and haemosiderin deposits in macroscopical analysis. They may also subsequently undergo necrosis and liquefaction, producing cysts [1].
On radiographs, brown tumours are well-defined osteolytic lesions, occasionally expansile and eccentric. On MRI, their appearance depends on the proportion of solid and cystic components; solid components are intermediate to low intensity on T1 and T2 weighted images, while cystic components are of high signal intensity on T2 weighted sequences; they may even present with fluid-fluid levels, mimicking aneurismal bone cysts; the solid components and septa enhance after gadolinium i.v. administration. [1, 2].
After resection of the adenoma or correction of the renal function, the osteolysis is replaced by osteosclerosis [3]. On MRI the signal intensity of the lesions on T1 and T2 weighted images, as well as their enhancement after contrast administration, regresses. In the absence of a sclerotic transformation other lesions, such as fibrous dysplasia, malignant tumours, or myeloma should be suspected.
Histological analysis does not always contribute to the diagnosis, as the findings are not specific and can be found in other bone lesions as well (such as giant cell tumours or granulomas and aneurismal bone cysts). Diagnosis is often based on follow up and on a spectrum of clinical, biological and radiological parameters [4].
Common locations of brown tumour lesions include the base of the skull, orbits, paranasal sinuses, spinal column, ribs, as well as pelvis, sacroiliac joints, femur, tibia, humerus, phalanges of the hand, clavicles and scapula, but it can also be seen in any bone of the body [5, 6].
Brown tumours may be asymptomatic or induce pain. Those localised in the spine may exceptionally be responsible for medullar compression [4].
Differential Diagnosis List
Brown tumours in regression
Metastatic disease
Enostosis
Fibrous dysplasia
Sarcoïdosis
Final Diagnosis
Brown tumours in regression
References

CT images in the axial plane without iv contrast medium 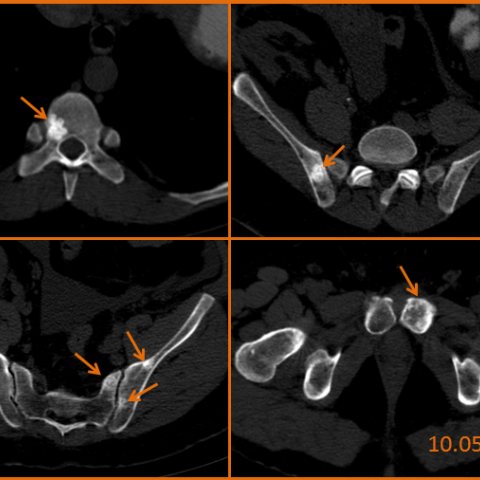 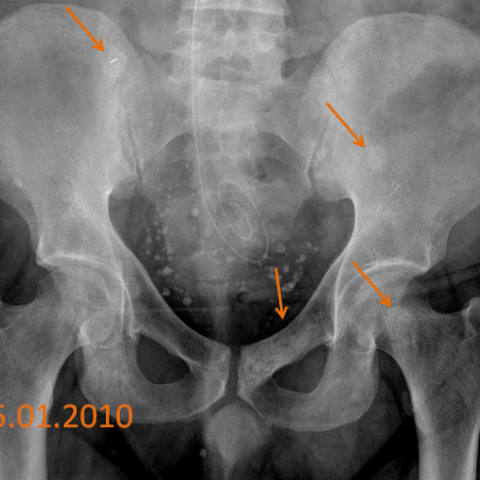 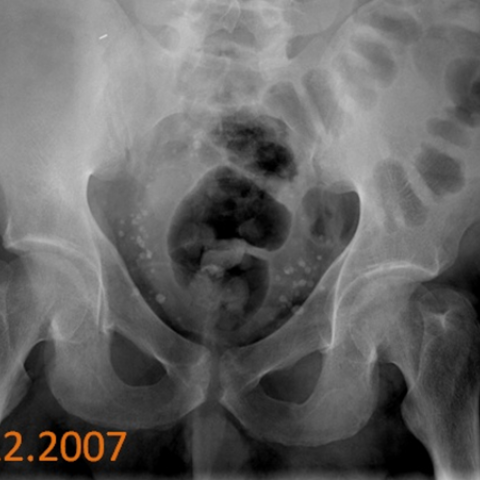 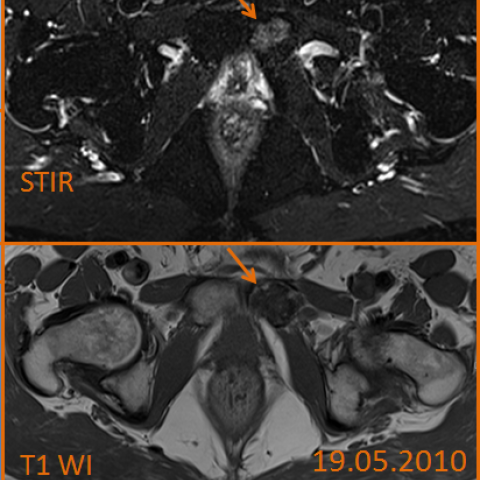 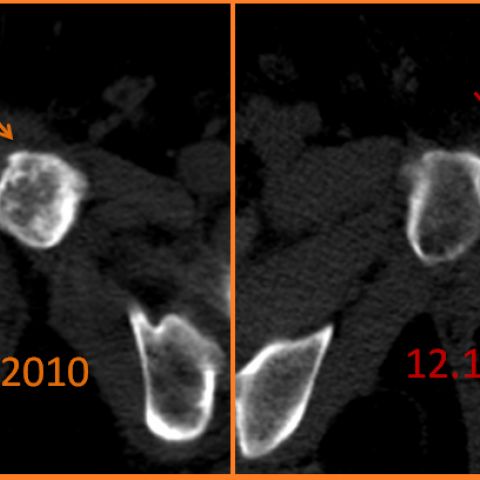 Comparison between abdominal CT on 10.05.2010 and 12.10.2010, (images in the axial plane obtained with bone window settings) shows sclerotic transformation of the heterogeneous mixed lytic and sclerotic lesion of the left pubic body.

CT images in the axial plane without iv contrast medium 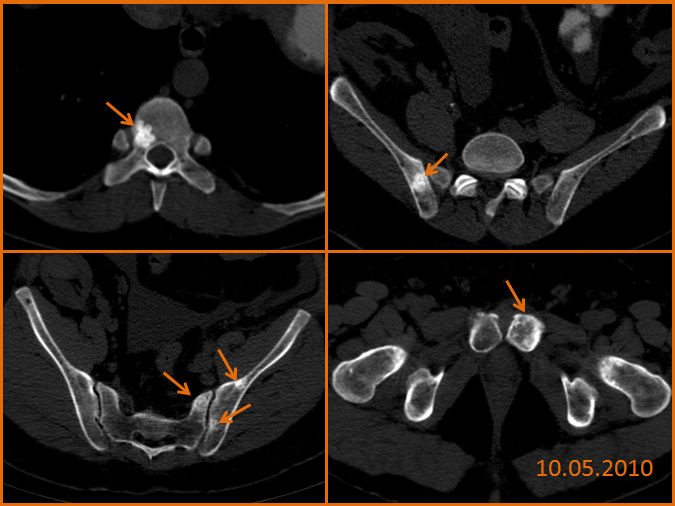 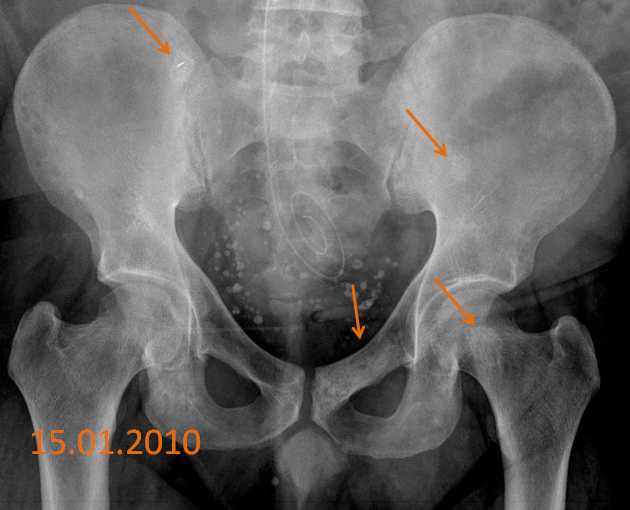 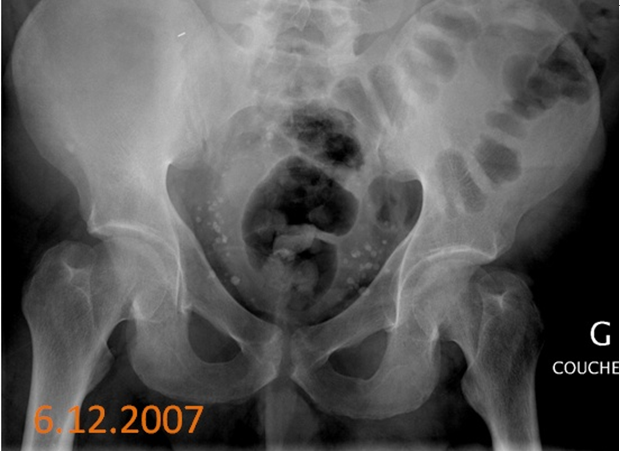 AP radiograph of the pelvis, 06.12.2007. No abnormality is visible.
Geneva University Hospitals, Department of Imaging 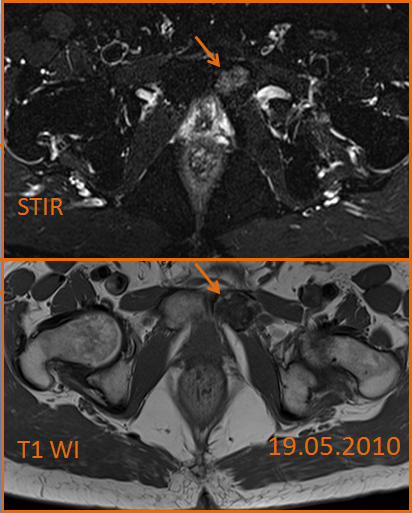 Comparison between abdominal CT on 10.05.2010 and 12.10.2010, (images in the axial plane obtained with bone window settings) shows sclerotic transformation of the heterogeneous mixed lytic and sclerotic lesion of the left pubic body.
Geneva University Hospitals, Department of Imaging