Clinically endometrial cancer presents with abnormal vaginal bleeding or pain related to the primary tumour or metastasis. Non primary cases may originate in cervix and extend to the uterine corpus. Mean age 60 years, range 23-78 years. Incidence is <1% of endometrial carcinomas with around 60 cases reported in literature. It is associated with endometrioid adenocarcinoma, adenosquamous carcinomas, mixed mullerian tumours and endometrial stromal sarcomas in some cases, but pure tumours are also reported [1].

On MRI imaging endometrial carcinoma generally manifests as hypo- to isointense on T1-weighted images and hyperintense or heterogeneous on T2-weighted images. Although MR imaging is not helpful in differentiating endometrial carcinoma from hyperplasia, it is helpful in cancer staging. Tumours are staged on the basis of depth of myometrial invasion. T1-weighted gadolinium-enhanced MR imaging is helpful in demonstrating myometrial invasion because a carcinoma will enhance less than normal endometrium [2].

Superficial invasion involves only the inner half of the myometrium, whereas deep invasion involves the outer half of the myometrium and beyond. If the normal low-signal-intensity junctional zone is intact, myometrial invasion can most likely be excluded. If the junctional zone is thinned due to atrophy or distention from clot, fluid, or polypoid tumour and is not well visualized, the presence of myometrial invasion is indicated by loss of the normal endometrium-myometrium interface. An irregular interface suggests invasion [3]. Both MR imaging, CT and in this case PET CT are useful in demonstrating extrauterine spread and lymphadenopathy.

Treatment involves total abdominal hysterectomy, bilateral salpingo-oophorectomy and pelvic and paraaortic lymph node dissection, followed by radiation therapy and chemotherapy [1]. There are few cases reported each year to have a clear consensus regarding best treatment but in most cases it is quite aggressive and shows early metastatic spread. 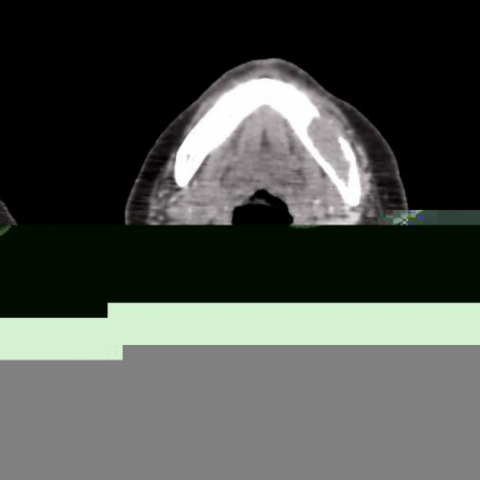 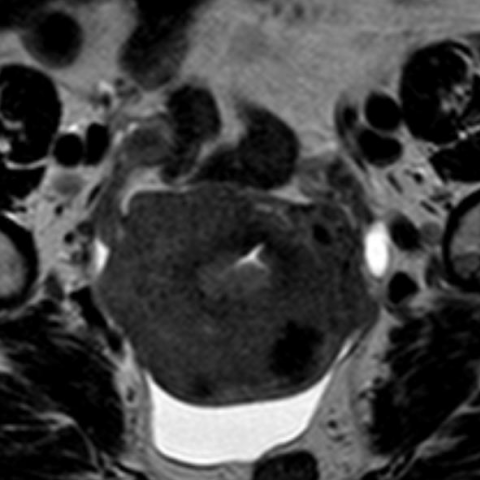 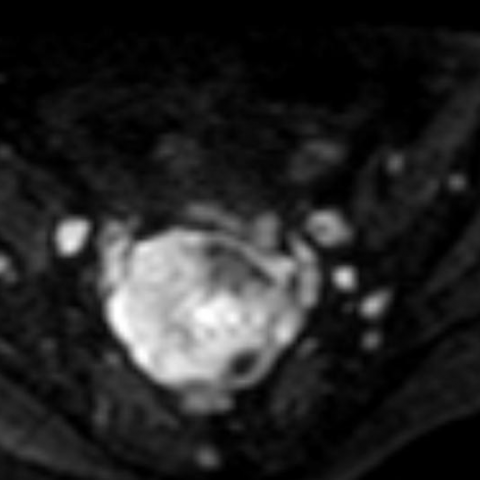 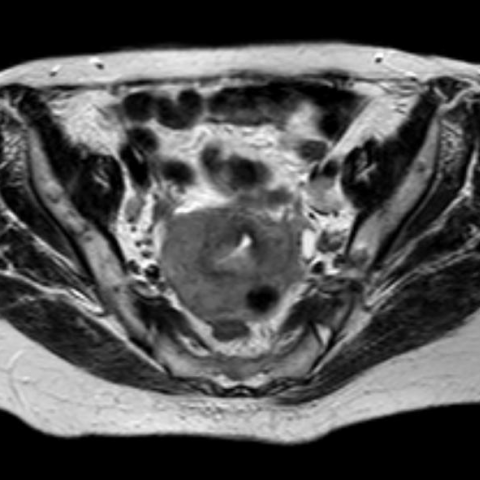 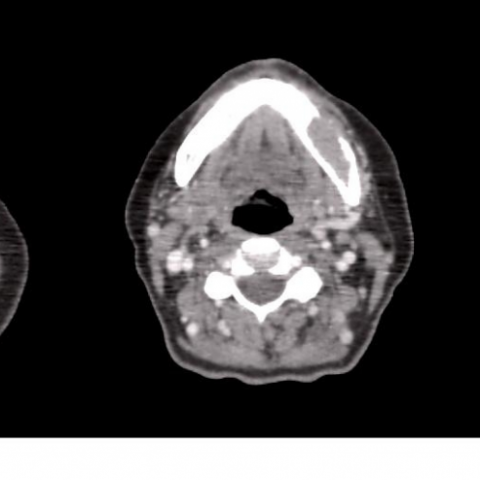 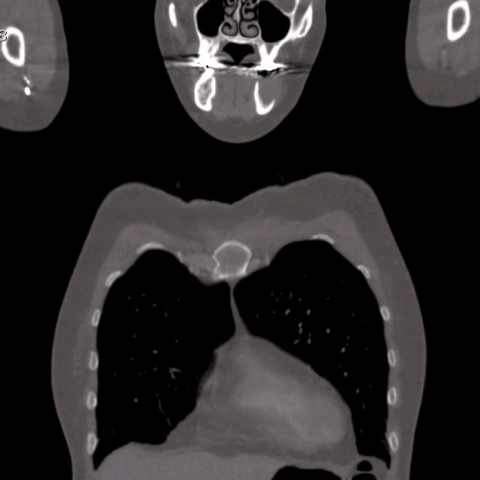 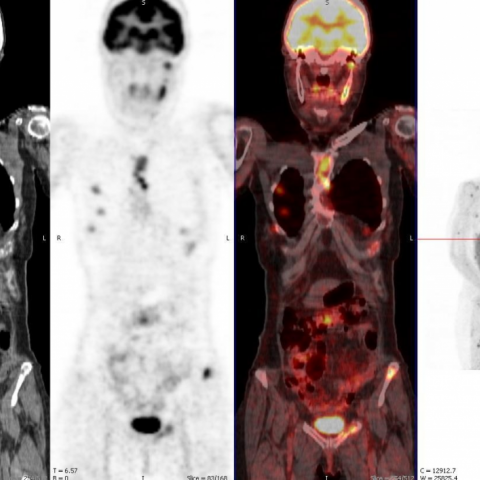 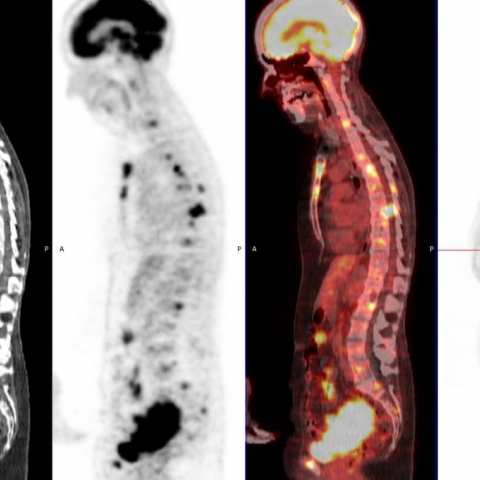 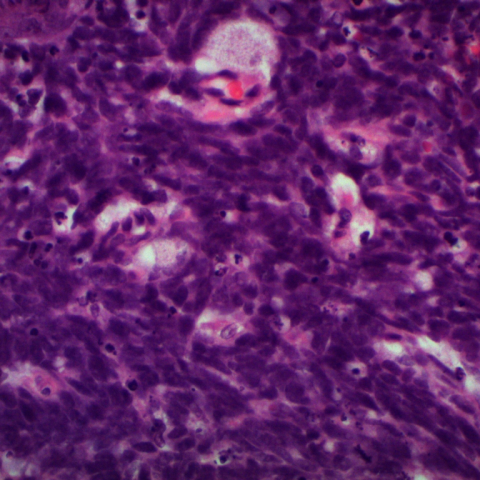 The tumour is composed of small round blue cells, with nuclear molding typical for small cell carcinoma.
Figure 6 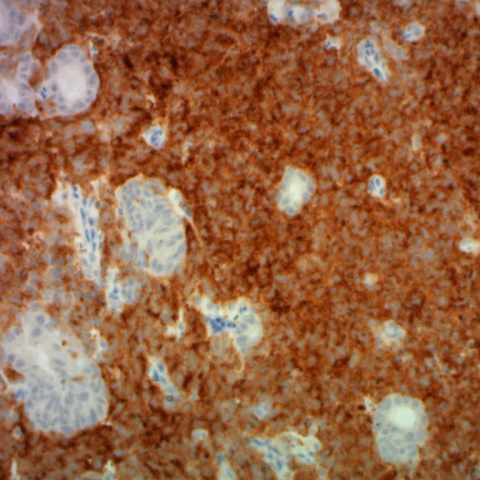 This small cell carcinoma is positive for neuroendocrine markers, including synaptophysin, chromogranin, and CD56. 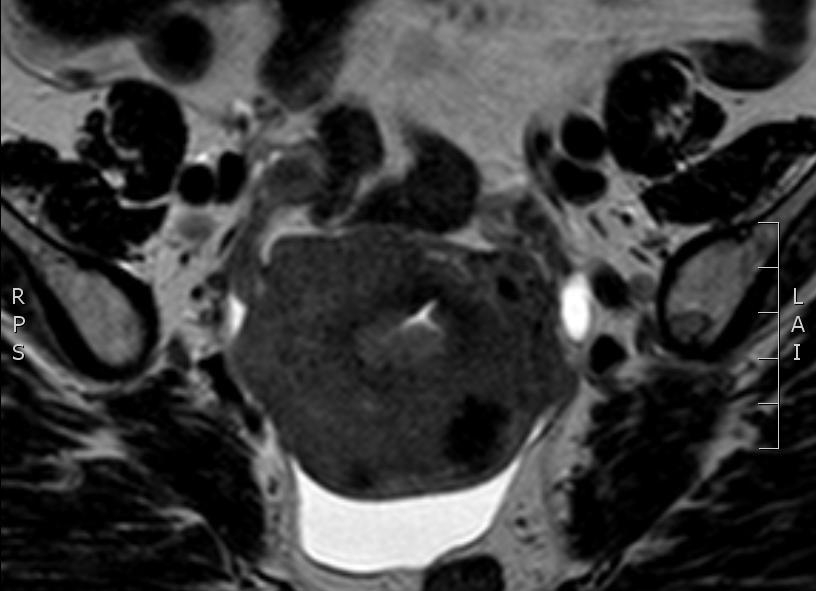 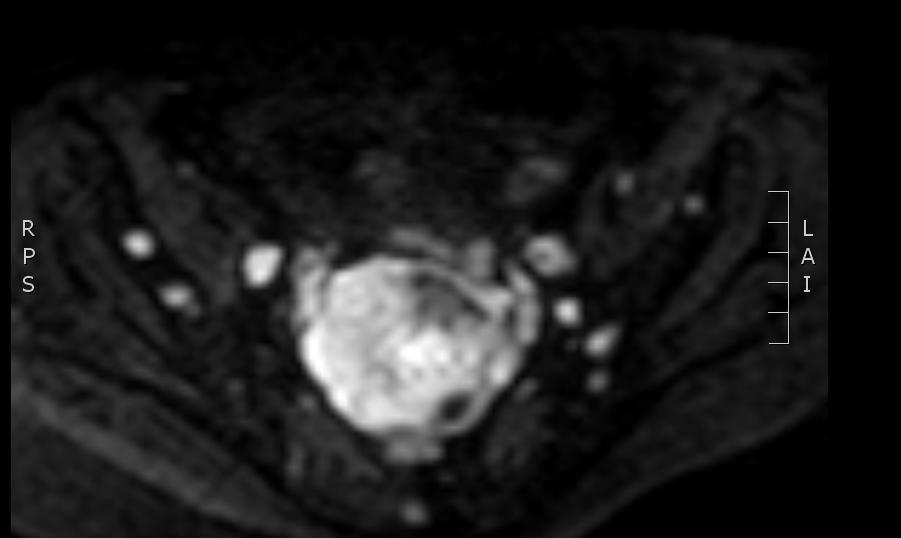 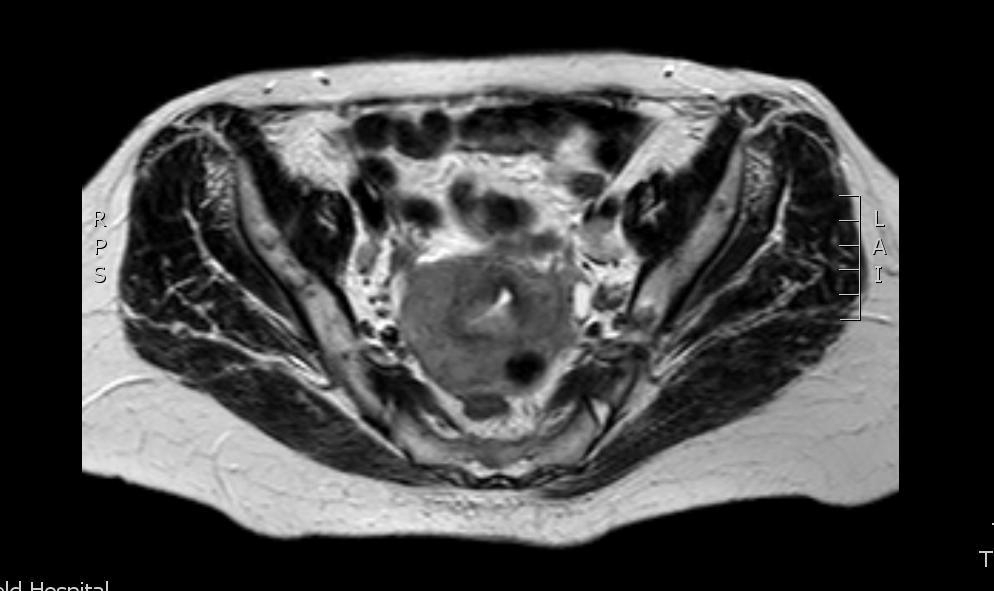 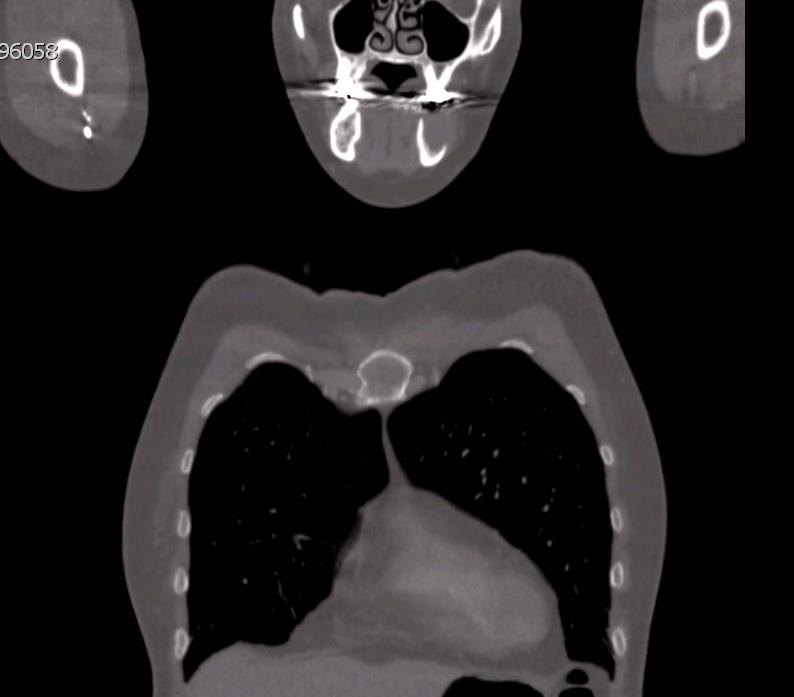 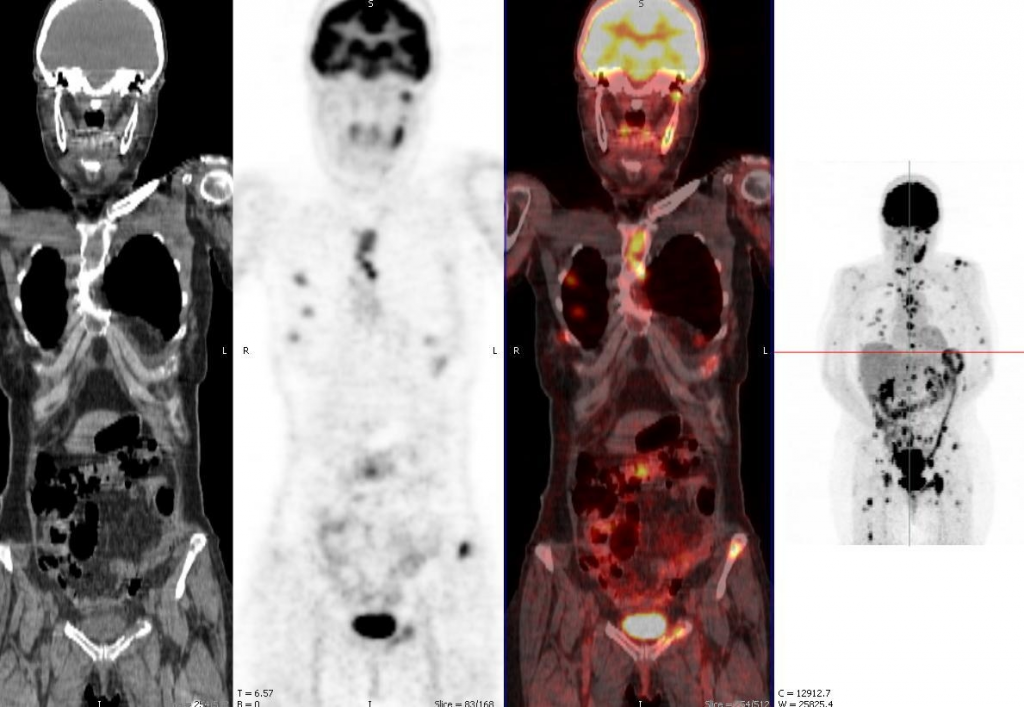 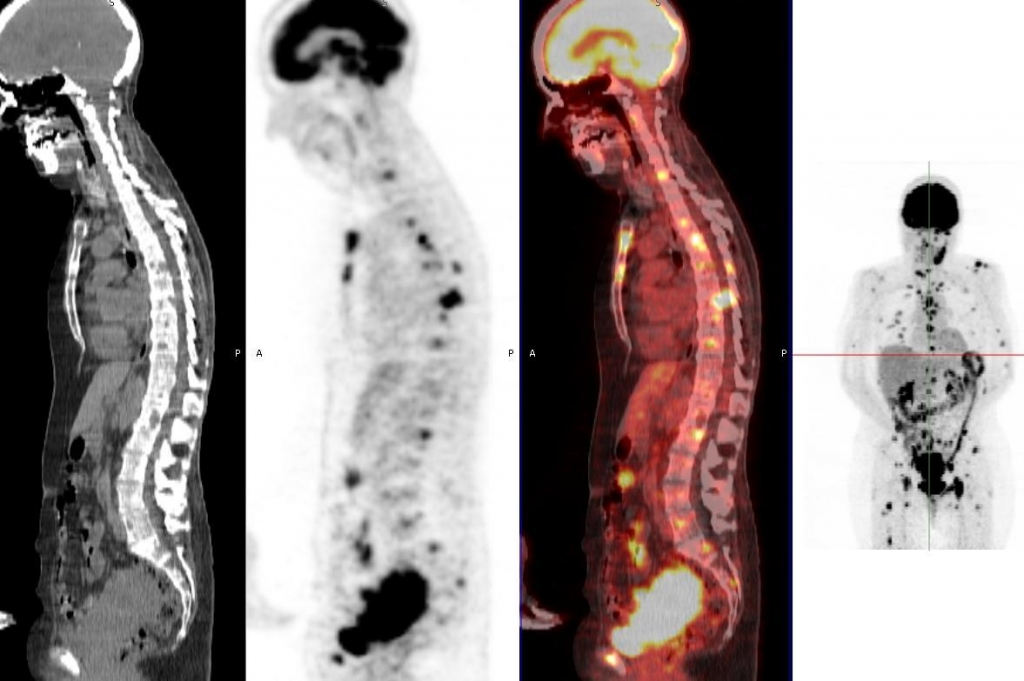 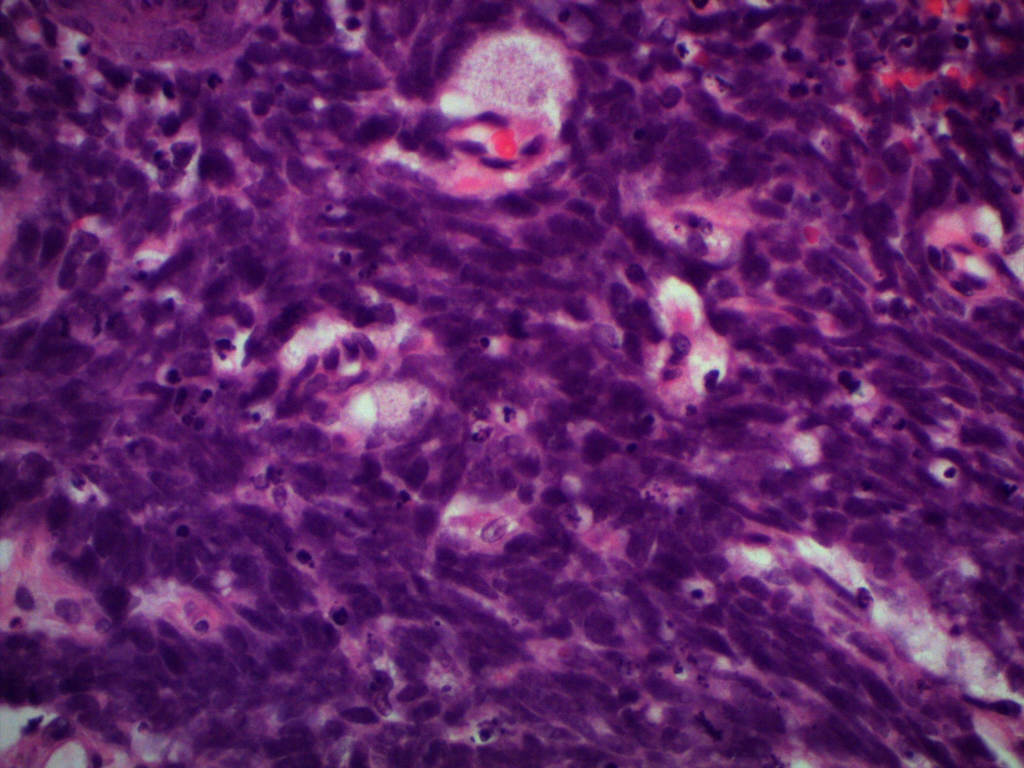 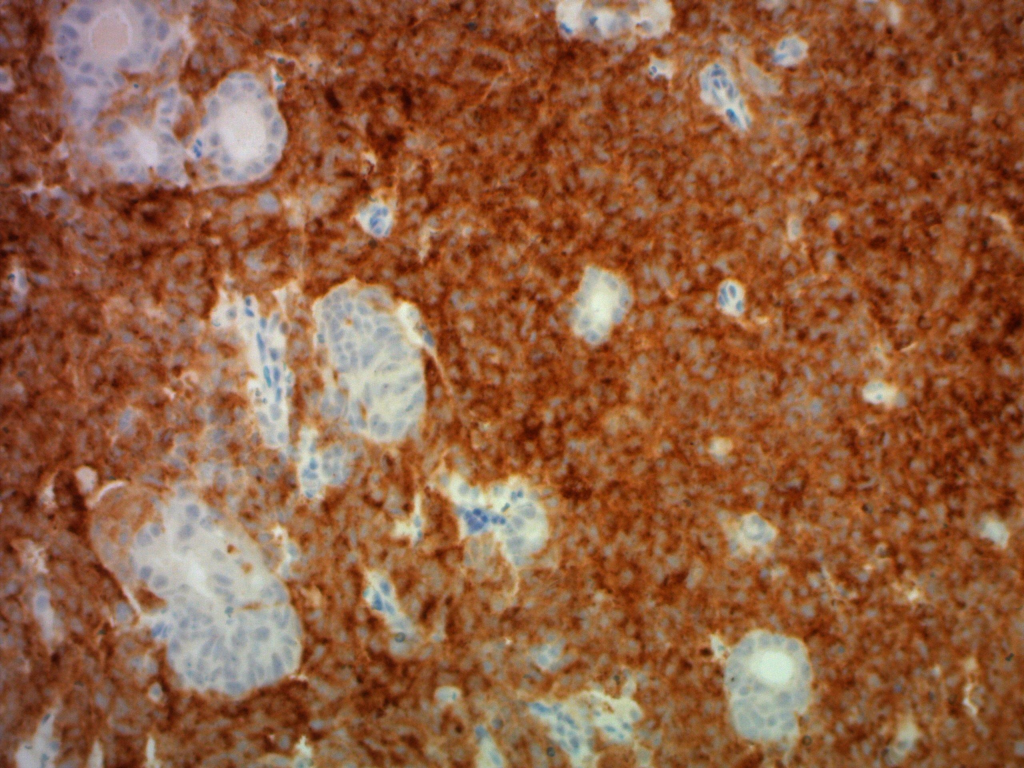