After dynamic contrast enhancement of the gland, it is difficult to identify a discrete enhancing nodular mass. There is very low enhancement surrounding what is likely an adenoma in the central left paramedian aspect of the gland. No other abnormal enhancement in the field-of-view is seen. Diffusion images to include b=1000 images and ADC maps grossly do not appear abnormal.
Discussion
Background: The data set was sent for review with computer aided detection (DynaCAD, Invivo Corp., Pewaukee, WI). Upon review of the data, there is a focus of gland abnormality in the left, more cephalad half of the gland at the margin of the central zone, Fig. 1 on ADC map images and Fig. 2 on the SPGR contrast enhanced images, where in retrospect there does appear to be a degree of asymmetric enhancement at this portion of the left paramedian gland. The T2-weighted axial also demonstrates an area of low signal intensity in the lateral horn of the peripheral zone(Fig. 3). This is considered suspicious for a possible primary site of prostate carcinoma. Scrolling through the entire dataset the enhancement pattern is bilateral and symmetric, so not as much of a concern as the unilateral focus. No other focal suspicious abnormalities are seen. Based on MRI findings, trans-gluteal, CT-guided biopsy was performed the following month (Fig. 4). Of the six cores acquired, four contained Gleason 7 (3+4) prostate carcinoma. Approximately 60% of the positive cores were carcinoma. Perineural invasion was not identified.

Clinical Perspective: CAD can assist in the identification of tumor suspicious regions in the prostate gland and aid in biopsy guidance.

Imaging Perspective: As MRI has improved over the past two decades for prostate imaging, it has proven to be a valuable tool when inserted appropriately in the diagnostic evaluation of patients with elevated PSA.

Outcome: This patient had a history of BPH when in fact he was harboring prostate cancer. 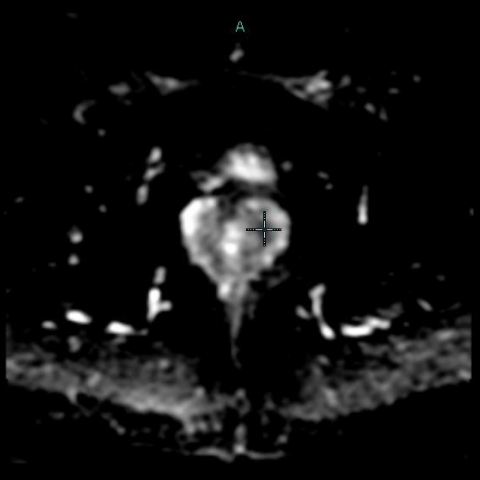 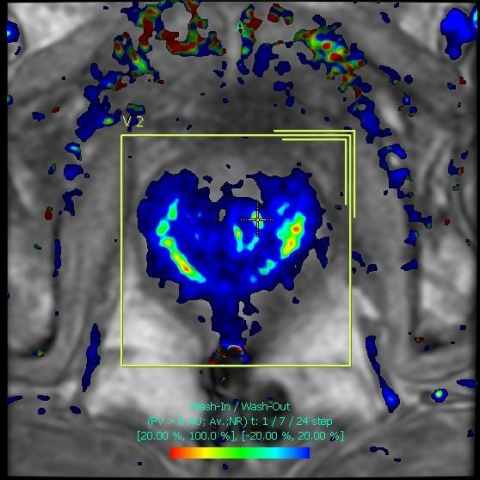 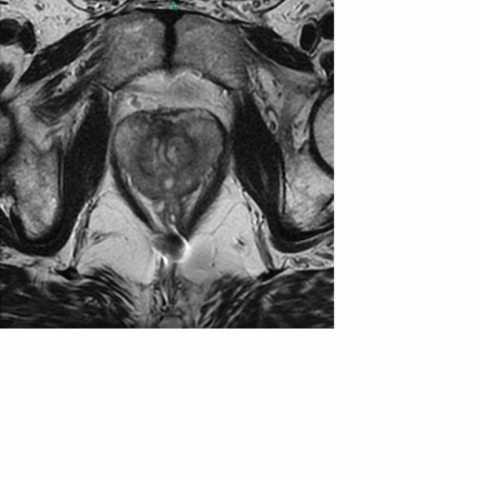 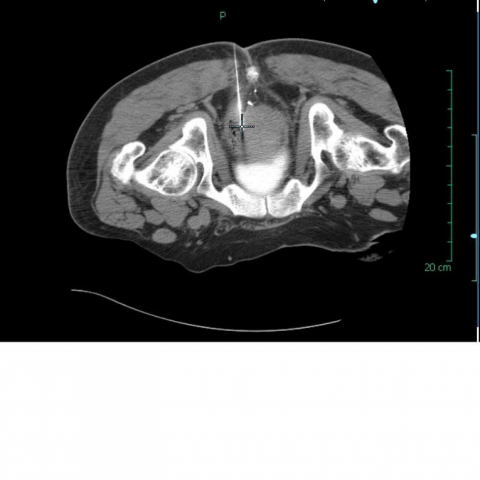 In the absence of a rectum due to colectomy, a CT-guided approach for biopsy was performed 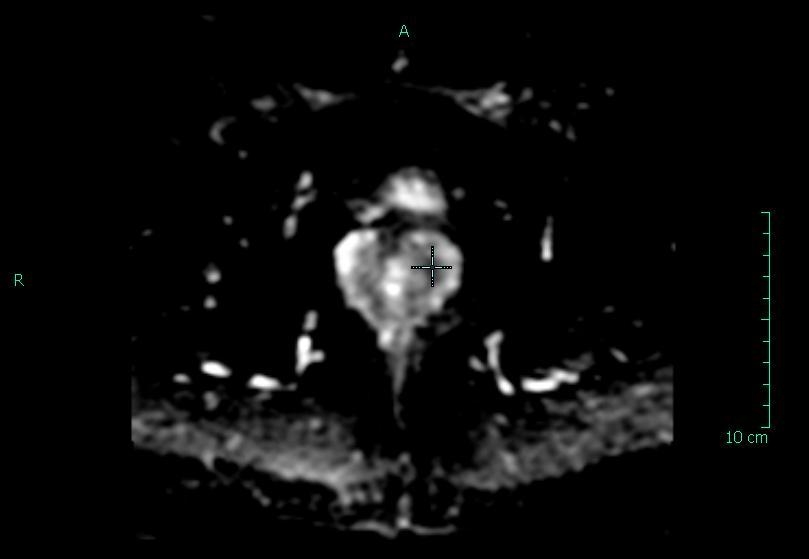 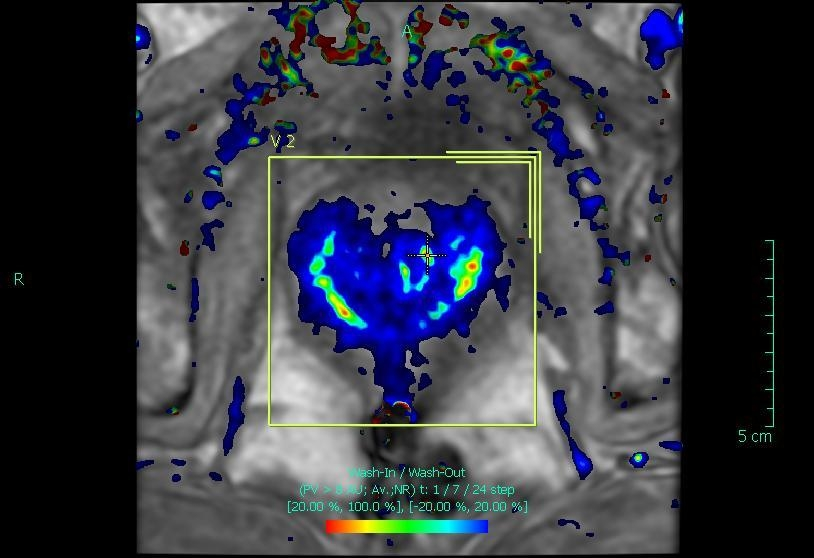 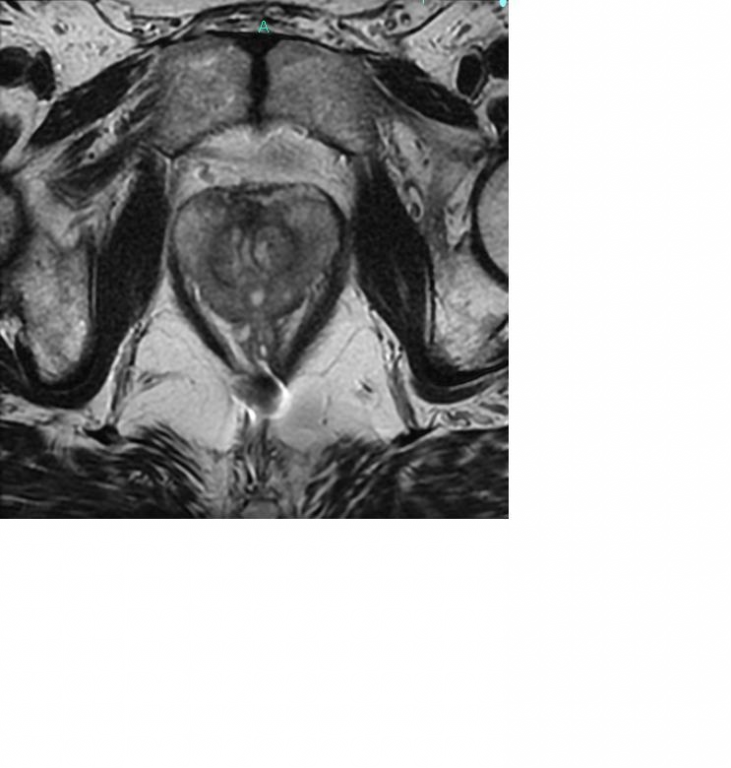 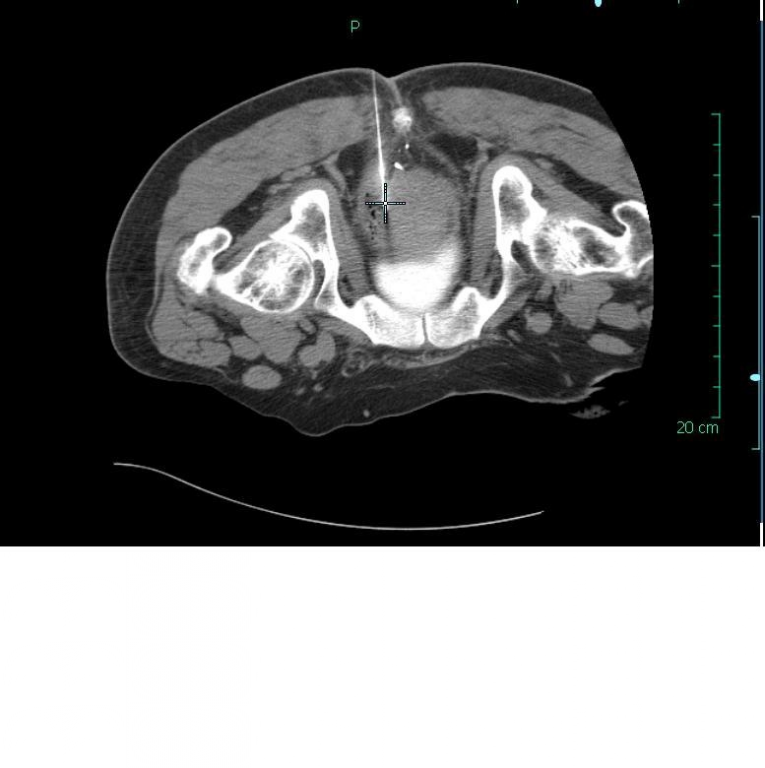 In the absence of a rectum due to colectomy, a CT-guided approach for biopsy was performed
Loos, S., Great Basin Imaging, Carson City, NV