Tuberculous Tenosynovitis - Anyone for Rice?

Initially ultrasound was undertaken, following which an MRI was performed.
Imaging Findings
Ultrasound was initially undertaken (no images shown) which demonstrated an ill defined mixed echogenity lesion on the palmar aspect of the hand extending distally to the proximal interphalangeal joint of the middle finger.

Given the equivocal non-specific findings MRI was recommended for better soft tissue delineation.

MRI demonstrated striking appearances with a mass centred on the palm of the hand isointense to muscle on T1, but with exquisite appearances of multiple small 'rice shaped' bodies slightly hyperintense to muscle surrounded by a very thin amount of fluid on the T2 and TIRM sequences. The mass had a well defined border, appearing to be contained within the synovial sheath, extending distally to the PIP joint. The flexor tendons to the middle finger ran directly through the mass without deviation. Mild rim enhancement occurred following the administration of gadolinium.
Discussion
Tuberculosis is a true multisystem disease, albeit most commonly associated with the respiratory system. It uncommonly affects the musculoskeletal system - reported to be approximately 1-3%. [1] Musculoskeletal involvement is most commonly with spondylodiscitis, with involvement of the periarticular soft tissues, such as the tenosynovial sheath and bursa very rare.

Presentation is usually with a lump, in this case in the hand, which is relatively painless (Figure 1). The chief concern at clinical presentation is whether the mass represents a sinister pathology, such as a giant cell tumour or sarcoma, hence the role of imaging. Equally so, MR imaging in particular aids the surgical approach in delineating the relationship of the mass to critical structures, such as tendons and the neurovascular bundle.

The aetiopathogenesis of tuberculous bursitis/tenosynovitis is thought to be either by direct inoculation or from haemtogenous dissemination. Although it is now known that intra-articular rice bodies can occur in other diseases, such as rheumatoid disease, it was first described with respect to tuberculous arthritis. [2]

The distinct rice bodies are composed of fibrous tissue which are isointense to muscle on T1 sequences, but have stark and very distinct appearances on T2 and TIRM sequences with the rice bodies (grains of rice or small balls) distinctly outlined against the synovial fluid. This has also been termed as a 'honeycomb' appearance (Figures 2, 3 & 4). [3]

It has been speculated that the rice bodies are due to synovial infarction, with synovium sloughing off and being encased in fibrin derived from synovial fluid. [4]

In this case surgery was performed with a volar mid palmar 'zig zag' incision, with an ellipse of palmar fascia excised to expose the swelling (Figure 5). The mass which was engulfing the flexor tendons was dissected preserving the nerves and tendons, revealing rice bodies and straw coloured fluid. Full clearance was ascertained.

The surgical specimens confirmed the presence of rice bodies, caseating granulomas and a mycobacterium tuberculosis on the AFFB stain (Figure 6). 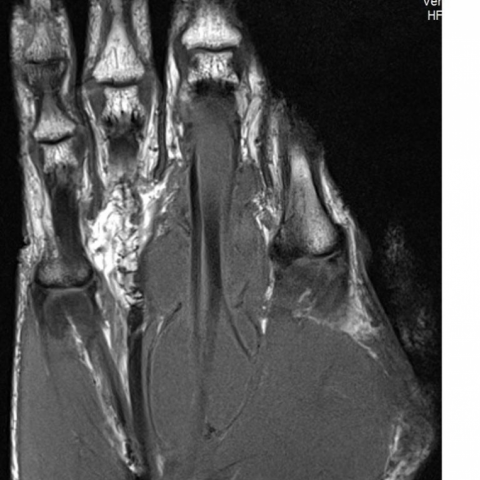 T1 coronal: Signal void tendons pass uninturrupted through the isointense mass on the palmar surface of the hand 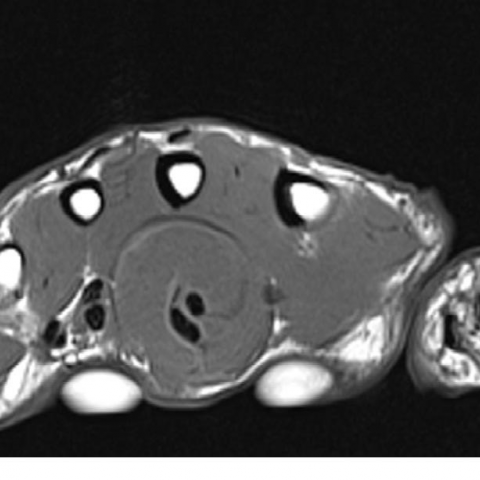 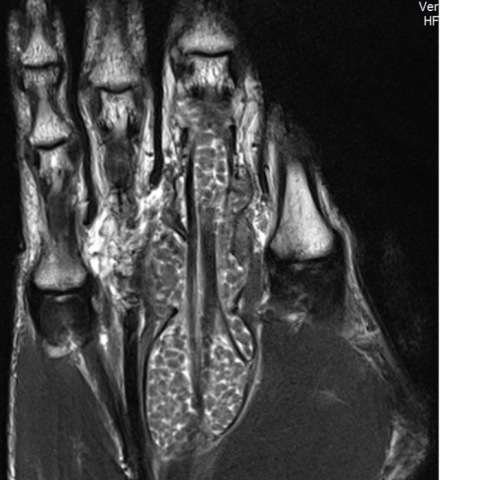 T2 Coronal Sequence: \'Honeycomb\' appearance of the mass related to the middle finger, with the multiple \'rice bodies\' well delineated within 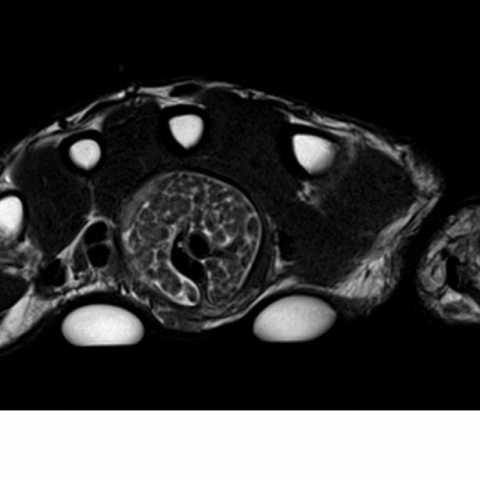 T2 Axial Sequence: \'Honeycomb\' appearance of the mass related to the middle finger, with tendons running centrally within.
Figure 3 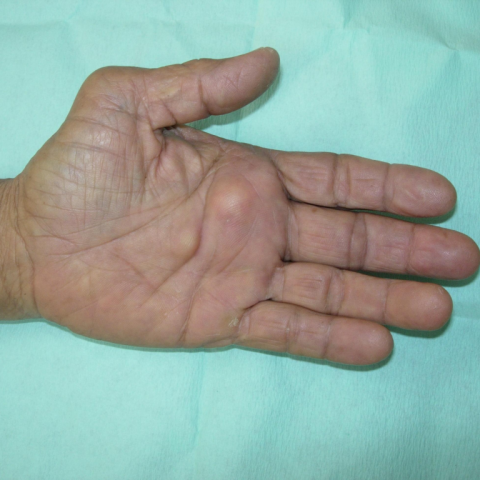 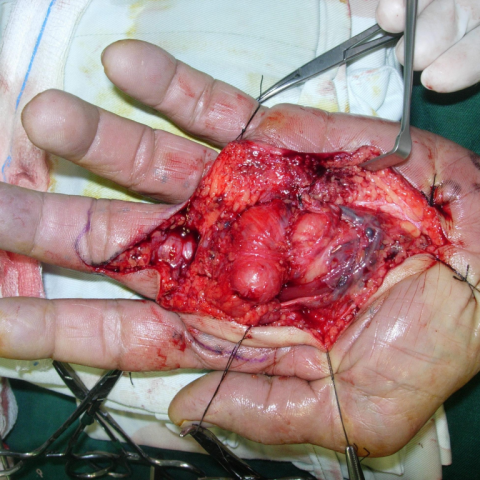 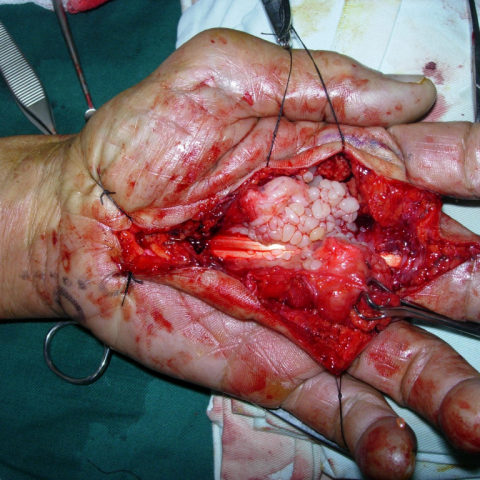 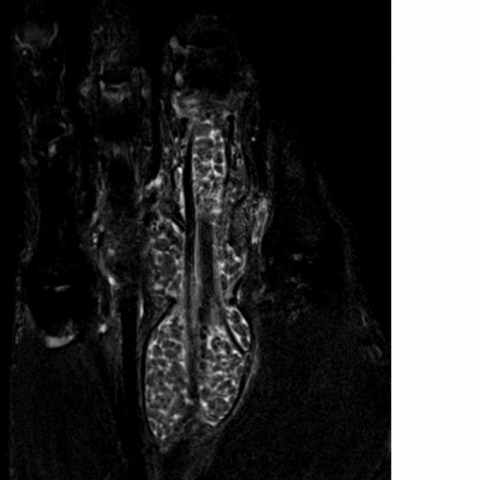 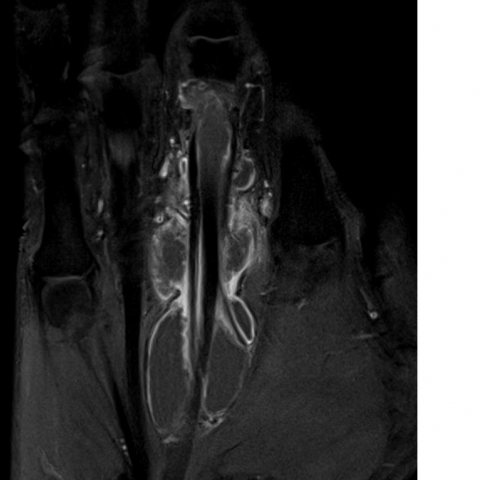 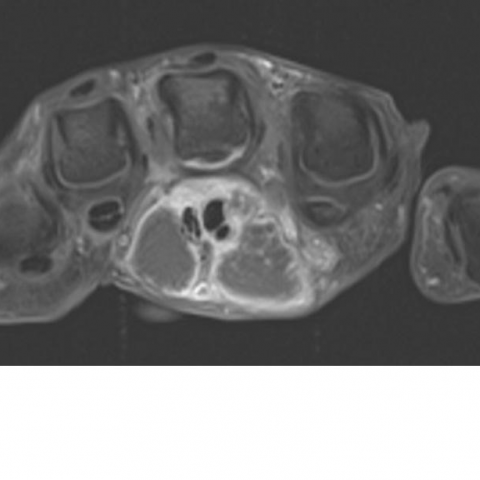 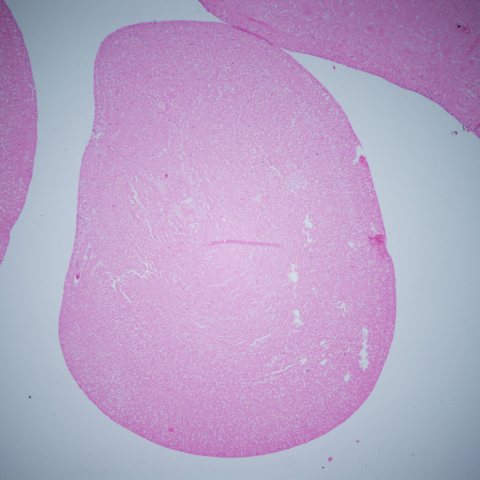 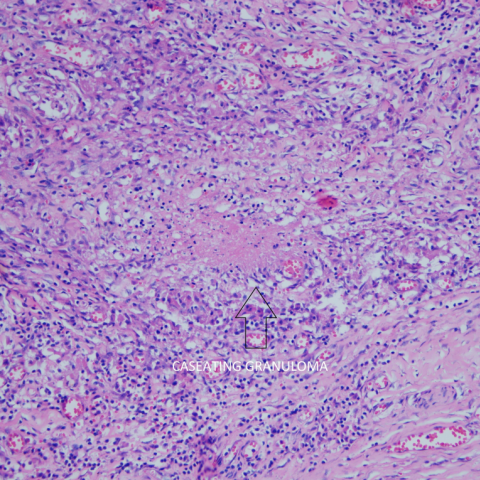 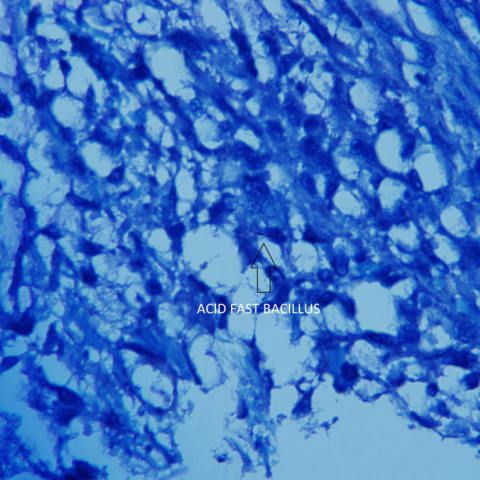 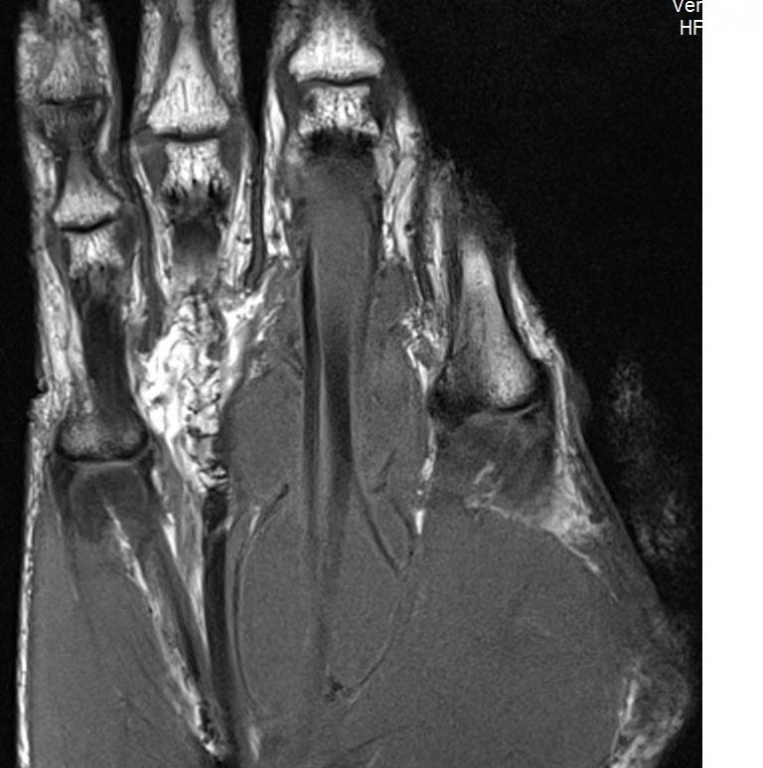 T1 coronal: Signal void tendons pass uninturrupted through the isointense mass on the palmar surface of the hand
RIPAS Hospital 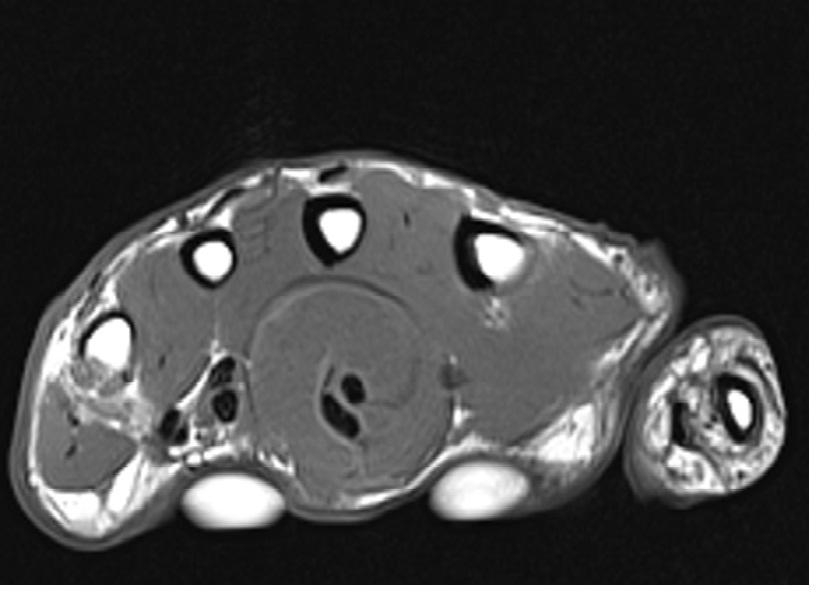 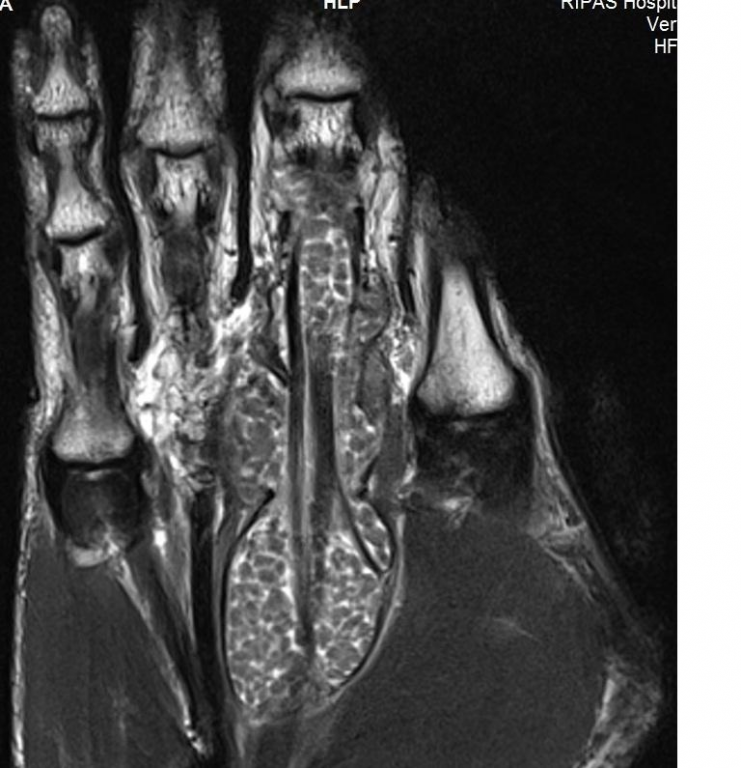 T2 Coronal Sequence: \'Honeycomb\' appearance of the mass related to the middle finger, with the multiple \'rice bodies\' well delineated within
RIPAS Hospital 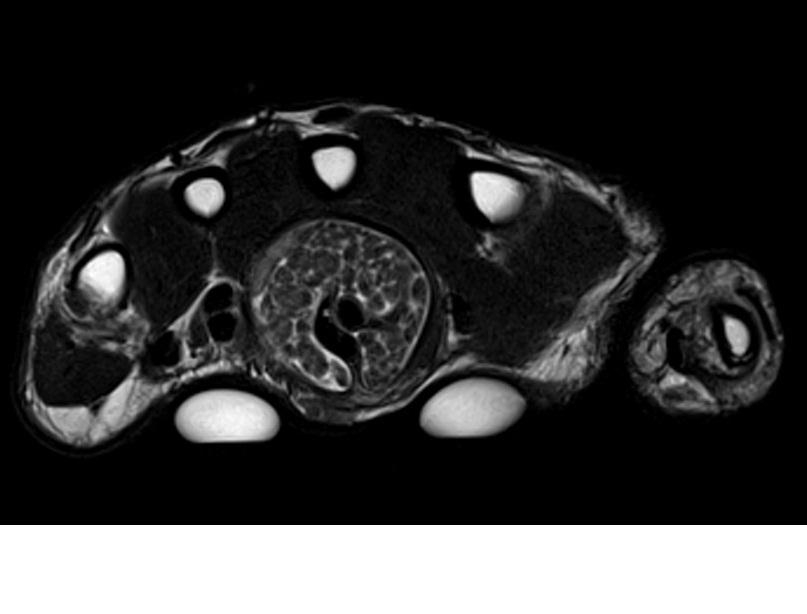 T2 Axial Sequence: \'Honeycomb\' appearance of the mass related to the middle finger, with tendons running centrally within.
RIPAS Hospital 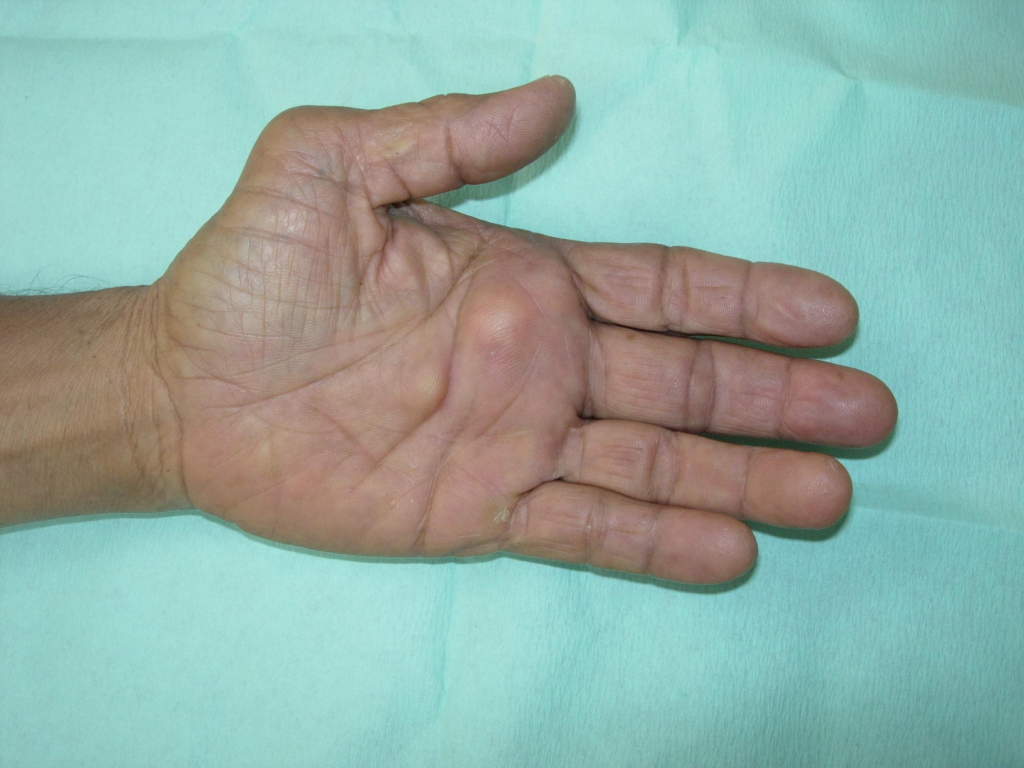 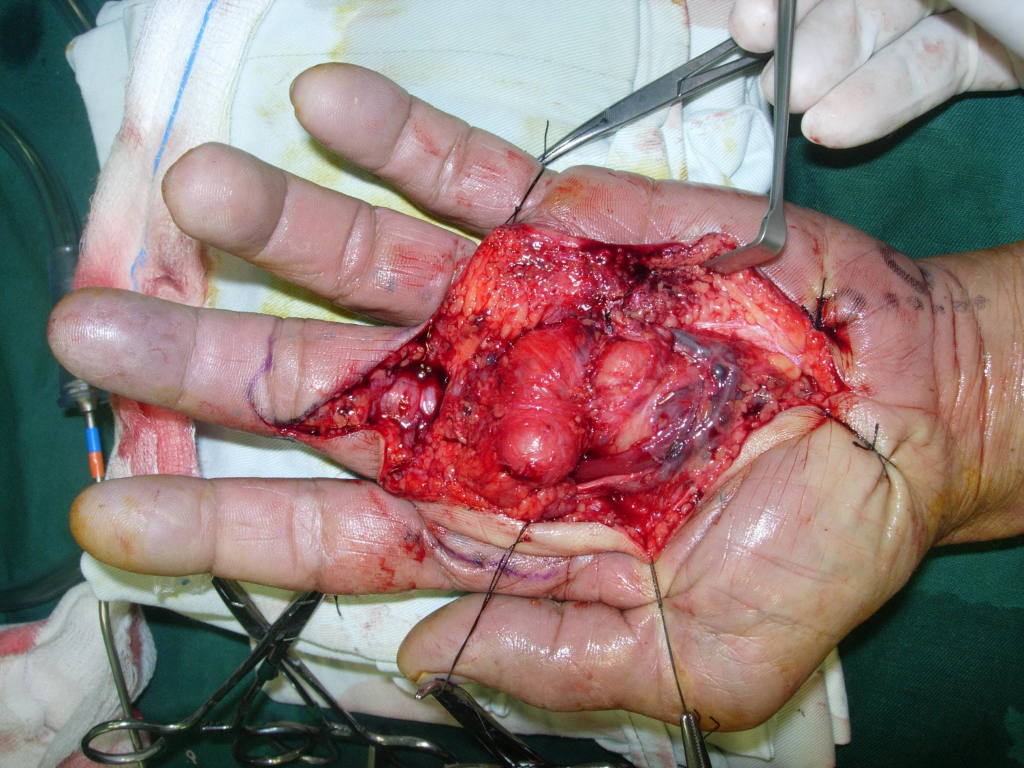 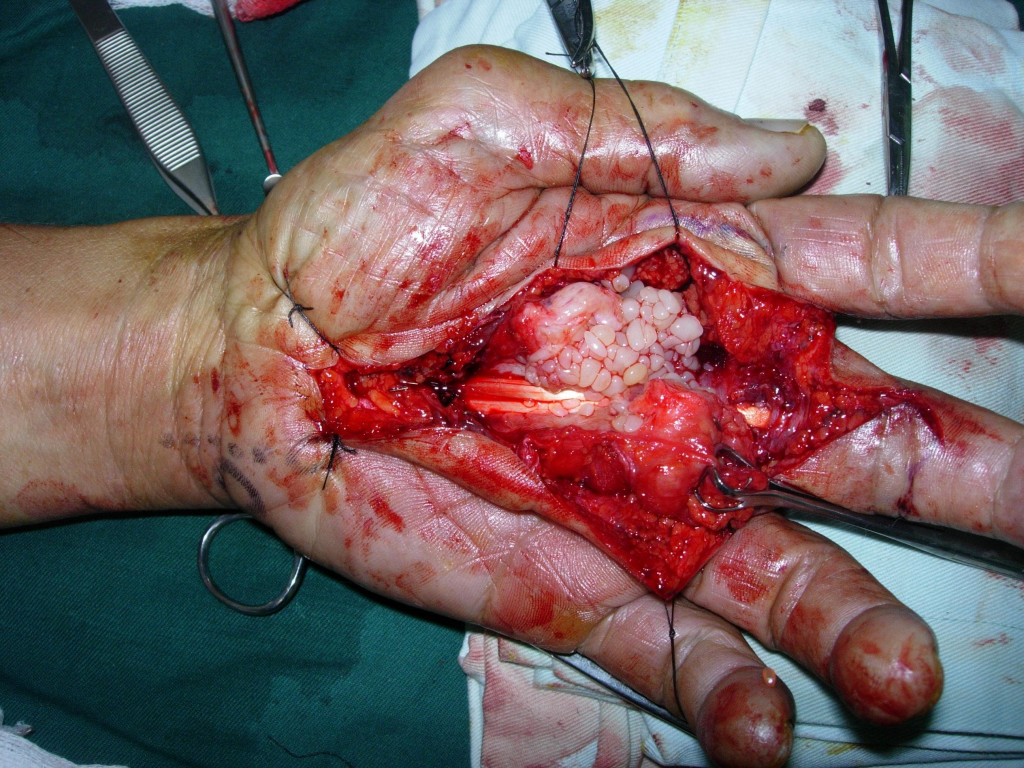 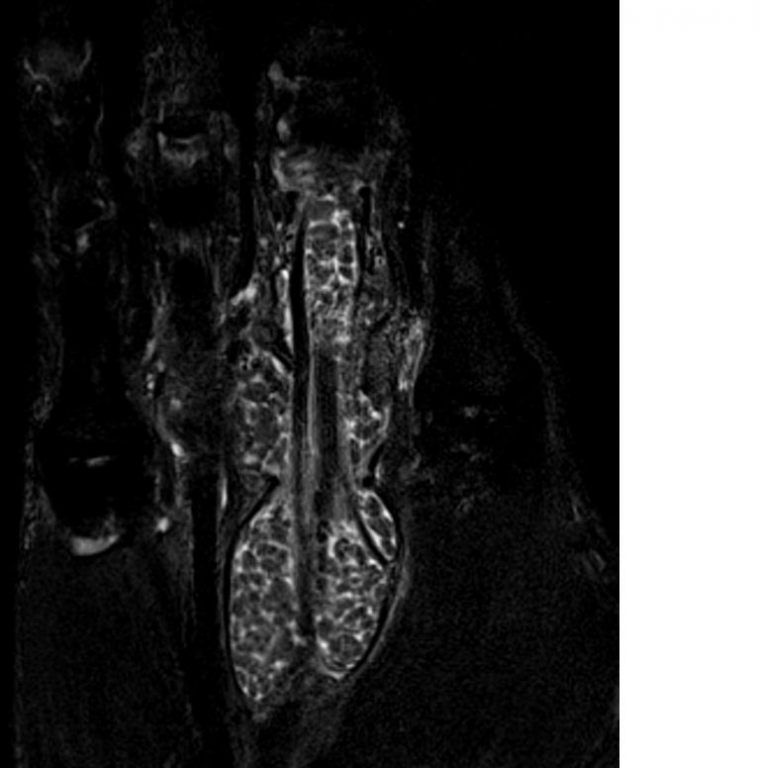 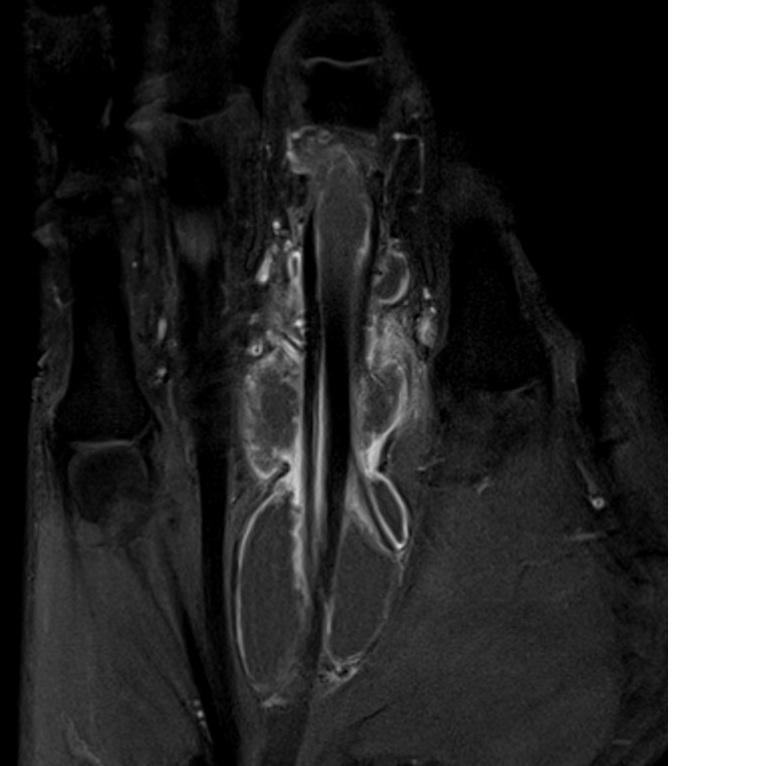 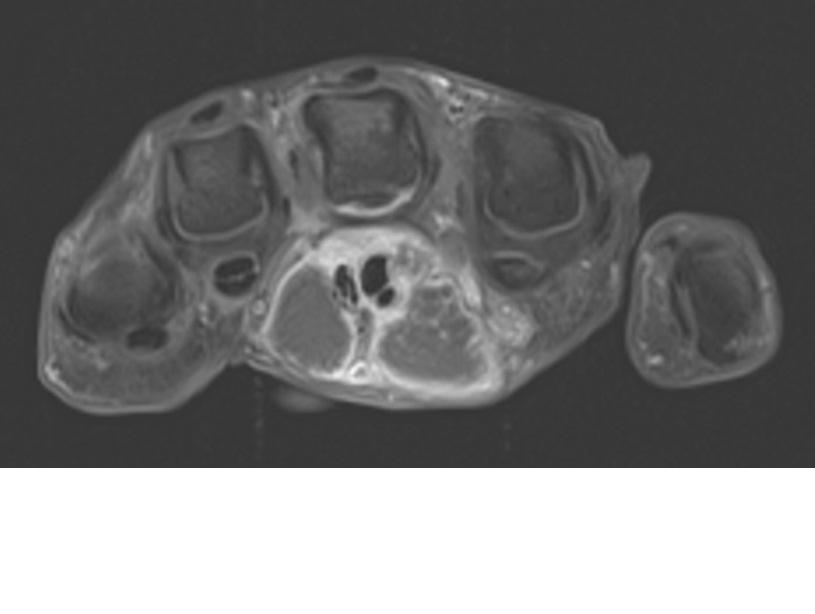 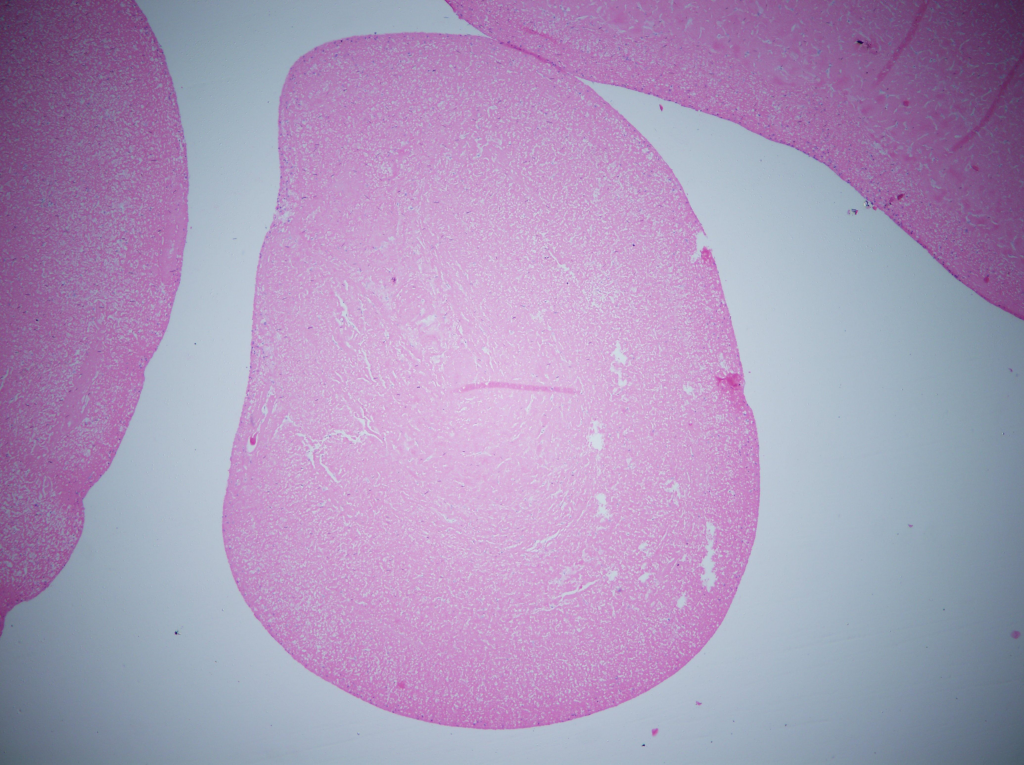 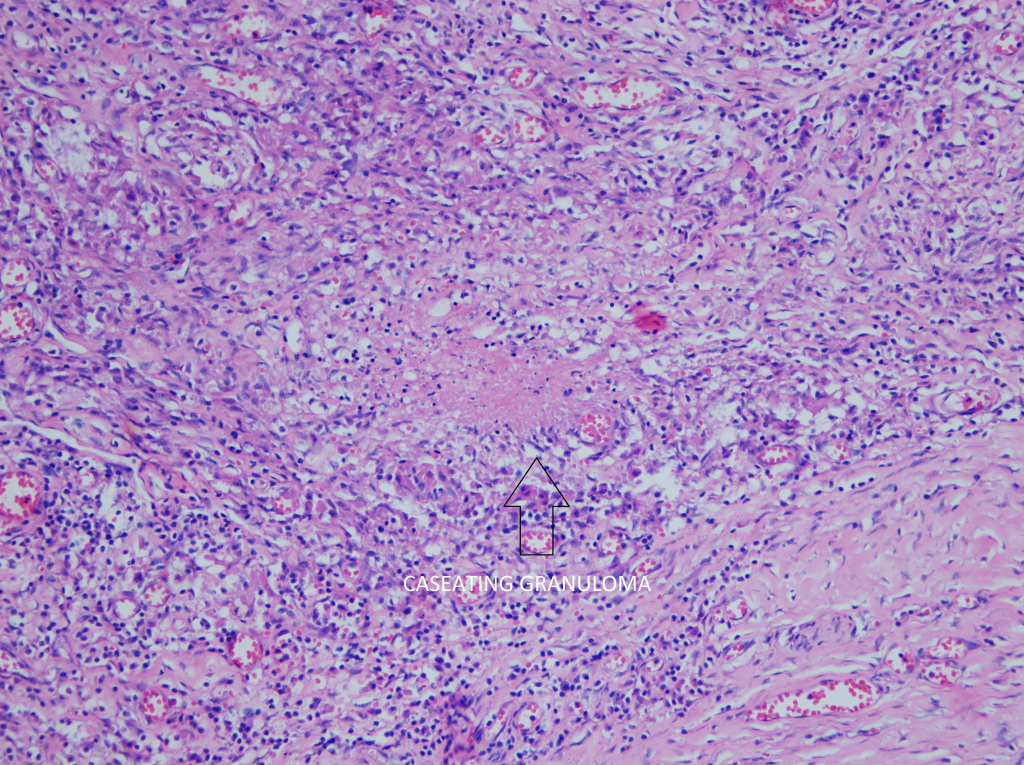 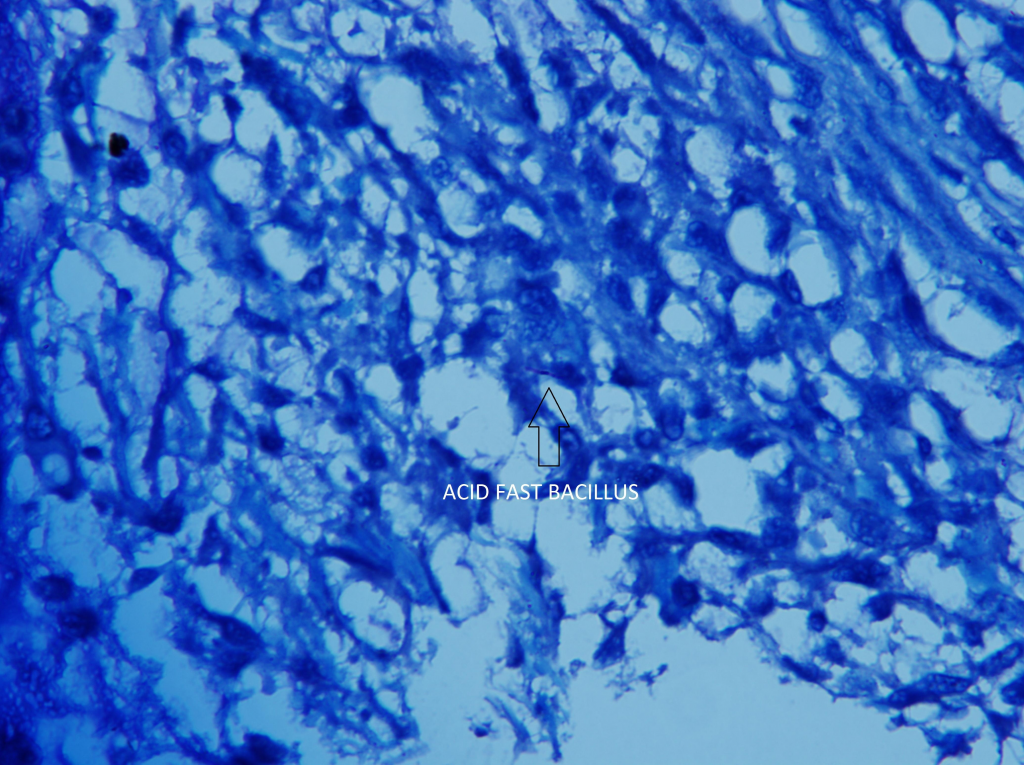